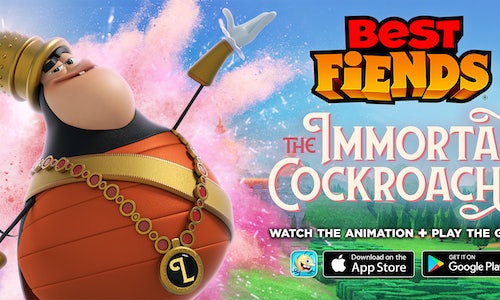 Seriously Digital Entertainment, the creators behind hit mobile games Best Fiends and Best Fiends STARS, is building an entertainment franchise through mobile gaming experiences. Seriously has a vision that entertainment brands will be built on mobile first, with content directly connected to the audience and treated as a live service with constant updates and interaction. Just like a Hollywood studio might have a television show or a film as the key foundation for a franchise, Seriously treats its mobile apps the same way.

Seriously’s seventh animated short, The Immortal Cockroach, continues expanding Best Fiends beyond its mobile games and demonstrates how the brand has evolved from its first short, Boot Camp in 2017, to becoming a major mobile-first entertainment franchise. The goal of these animated shorts is to continue to broaden the world of Minutia and bring to life the characters beyond the mobile app.

Seriously is challenging the traditional studio model by creating animated shorts that not only appeal to their audience of 2 million daily active users but also follow familiar storylines that can be easily understood by anyone, whether they play the games or not. The Immortal Cockroach is a prime example of that.

In the world of Minutia from the Best Fiends games, the Fiends race to the top of Mt. Boom as the Slugs are on a desperate mission to destroy them. Emulating the failed attempts of the Slugs in-game, The Immortal Cockroach follows the Slugs as they send their crack team of Slug Assassins to put an end to the infamous Lapoleon, the aristocratic French Cockroach --  but, no matter how hard they try, everyone knows that a cockroach never dies.

In order to create a high-quality animated short that would resonate with audiences, Seriously worked closely with A-list talent, embraced the future of entertainment on mobile, and played to a simple storyline that is universally understood.

Seriously recruited and secured Hollywood heavyweights for every detail of the animated short -- voice cast, animation production, writer, and music composition. Starting with the script, Nikolai Von Keller (Today Everything is Something Else) wrote the story for Seriously's seventh short to continue the expansion of the Best Fiends brand beyond its mobile games. From there, Seriously recruited an all-star voice cast of Maurice LaMarch (Futurama, Zootopia), Pamela Adlon (Californiacation), David Herman (Office Space), and more. The short features full animation production by Golden Globe-nominated Reel FX. The incredible Hollywood talent involved in the creation of this branded content demonstrates the industry's willingness to experiment with new mediums.

The Future of Entertainment

Seriously has a vision that future entertainment brands will be built on mobile first, with content directly connected to the audience. Best Fiends’ repertoire of animated shorts mark the first major effort by Seriously to expand the Best Fiends brand beyond its mobile games. The world of Best Fiends comes to life in these shorts, which have been indicative of how brands can grow and succeed on mobile. Seriously’s success is also a testament to how the audience has shifted to mobile and how the Hollywood studio content creation monopoly of the past, is now being challenged.

The star of the animated short, Lapoleon, is a rugged roach that can withstand an atomic blast. In The Immortal Cockroach, Lapoelon enjoys his days in his beautiful castle pampering himself and indulging in exquisite food. The only thing that could spoil his day are the pesky Slugs. While the Slugs continually send in their skilled team of assassins to destroy Lapoleon, let’s not forget that he’s Immortal. Lapoleon thinks of himself as French royalty (since he will eventually be emperor of everything, at least, in his own mind). Essentially, Seriously is playing off of the commonplace joke that cockroaches are impossible to kill. So even if a viewer doesn’t play Best Fiends, it’s easy for viewers to follow along with the plot, making The Immortal Cockroach appeal to a wider audience.

By creating high-quality content, tapping into the industry trend of mobile entertainment, and developing a relatable story, The Immortal Cockroach exemplifies Seriously’s vision for the future of Hollywood’s entertainment brands.

To date, The Immortal Cockroach has more than 2.1 million views on Youtube, making it one of Best Fiends most viewed animated shorts of 2019.

Video for The Immortal Cockroach