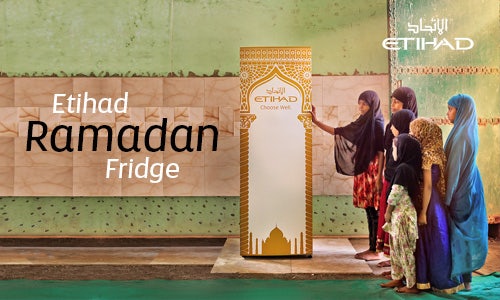 Every year now, hundreds of people across the UAE place a fridge outside their homes. Fully stocked with food and water each day, those in the community who are less fortunate are invited to help themselves to what they need in order to break their fast.

‘Ramadan Fridges’ have quickly become a tradition across the UAE, and have started to spread throughout the GCC. But for Etihad Airways – the national carrier of the UAE – this was only the beginning. Etihad wanted to share this spirit of giving with the world. And so, the ‘Etihad Ramadan Fridge’ was born. A UAE tradition was about to go global.

The key objectives of this campaign were three-fold:

In order to create the most impact possible, Etihad set off to identify several communities in need within reach of Etihad’s global network. Then, it was a matter of placing an Etihad Ramadan Fridge within those communities, and ensuring they were replenished daily with food and beverage.

The team began by examining Etihad’s global network, and studying the various communities within it. Then, local connections were made within those communities, in order to get a better understanding of the challenges they face, be it socio-economic or otherwise, during Ramadan. A diverse cross-section of the world took shape, and after a thorough selection process, the following communities were chosen:

Each community was chosen after careful, thoughtful consideration. Within those communities, we didn’t just find people in need of a helping hand, but people who were willing to give everything to others – even when they themselves had little to give.

The spirit of sharing was in their hearts, and a conscientious drive towards helping those in need. Etihad’s aim became to enhance those efforts. We would be giving help to those trying to help others. And through the presence of the Etihad Ramadan Fridge, we hoped to start a chain reaction that would ripple through those communities and beyond.

Understandably, the campaign was fraught with logistical challenges that needed to be addressed. Each community was in either a remote or difficult-to-access area with limited (and in one case non-existent) infrastructure. This made daily delivery of hot meals alone problematic. However, these challenges were overcome through a passion for the work, and a determination to share the Ramadan Fridges with the communities.

The team – led by members of the Etihad Cabin Crew who also acted as Etihad Airways ambassadors in each community – worked with local catering partners to deliver the fridges their intended locations, and keep them stocked.

Additionally, each fridge was designed in collaboration with local artists and suppliers, ensuring they represented the traditions of the communities they would be visiting.

Much to the delight of our team and brand ambassadors, each Etihad Ramadan Fridge was greatly appreciated by each community, with many actively helping to prepare the dining locations for Iftar.

Around three to four hundred meals were consumed daily in each community. And while those in need could help themselves, the team also noticed that the more affluent in the community were eager to help keep the fridges stocked, and joined in with the fast-breaking celebrations.

In terms of the production of the final social media content, an agile and highly capable production team was able to capture a cinematic perspective of the campaign, while keeping a light footprint on the ground.

An episode dedicated to each community was produced, telling their story in their words, and showcasing their positivity in the face of adversity with the entire world.

The campaign was incredibly well-received across social media. All four episodes garnered a total of 13.9 million views, in addition to 33,000 shares, a 29% engagement rate, and near-universal positive sentiment. But perhaps the most enduring legacy of the Etihad Ramadan Fridge has been the widespread community spirit and lasting international support that it spurred.

In reaction to this campaign, many people from around the world have joined Etihad in helping these communities however they can. Inspired by the positivity and resilience showcased in each episode, people have donated books, food, and even contributed towards repairing buildings and infrastructure.

This was beyond the expectations of the team when the campaign first took shape, and proved quite eloquently that its efforts to bring the UAE’s spirit of sharing to the rest of the world was a complete and total success. 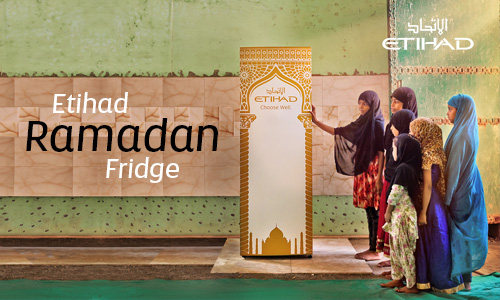