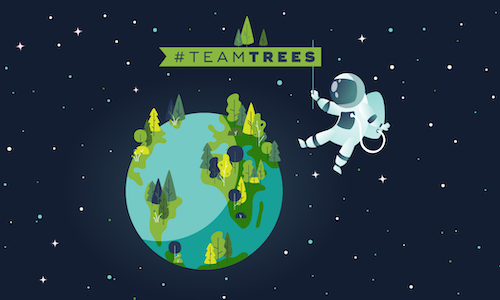 What started as a reddit post quickly turned into a global environmental force, driven by the largest YouTube collaboration in history and a new generation of tree-planters.

#TeamTrees began in May 2019 when a fan on reddit challenged 21-year-old YouTube star MrBeast to plant 20 million trees to celebrate reaching 20 million subscribers. At his audience’s suggestion, MrBeast teamed up with fellow YouTuber and ex-NASA engineer Mark Rober to craft an ambitious tree-planting campaign bigger than either of them and open to all.

Together with the tree-planting pros at the Arbor Day Foundation, they would form a super-team of YouTube creators and fans, with a fighting chance of achieving an insane goal: raising $20 million by 2020 to plant 20 million trees around the world.

In a time of increasing wildfires, extreme weather, and devastating impacts on communities across the globe, planting trees is one of the most effective climate change solutions. Arbor Day established trust in the tree-planting process itself, and, as planting-partner, ensured that #TeamTrees would “plant the right trees, in the right place, at the right time, for the right reasons.” For every $1 donated, one new tree would go in the ground an area of high need.

At a time of political gridlock and environmental degradation, #TeamTrees would send a clear, positive message that young people are stepping up to address climate change with concrete action.

Strategy #1: Organize a team of YouTube creators and online influencers to make tree-related content and drive donations to the cause.

With a short timeline to launch, MrBeast, Mark Rober and #TeamTrees Campaign Director Matt Fitzgerald recruited fellow creators through data-informed personal outreach and a series of secret invitation videos describing the plan. MrBeast publicly teased the #TeamTrees launch with a bold tweet predicting the “largest YouTube collaboration of all time.”

#TeamTrees officially announced itself on October 25th with an unprecedented wave of videos that reached across genres and generations with a common call-to-action: give $1, plant one tree. This coordinated action drove the campaign’s visibility across 400+ YouTube channels and inspired new #TeamTrees fan communities on Twitter, reddit, Instagram and TikTok. #TeamTrees trended on YouTube and Twitter almost immediately upon launch.

Founded in 1972, the foundation is the largest membership organization dedicated to planting trees. As the charitable recipient and planting partner, Arbor Day legitimized the startup campaign and effectively vouched for the long-term success of #TeamTrees planting projects.

Strategy #3: Use the initial wave of videos to grow an online community that could co-create the campaign and harness the creativity of the internet for ongoing momentum.

#TeamTrees videos were designed to prompt an immediate, on-platform donation or direct people to give at TeamTrees.org. That central campaign website was custom-built to generate engagement and storylines by allowing donors to post messages along with their contributions. The accompanying ‘Most Trees’ donation leaderboard was seeded with an initial 100,000 trees ($) by MrBeast, along with the message “I dare you to take this space from me :)” When superstar DJ Alan Walker topped MrBeast by $1, a ‘race to the top’ was born and new storylines were seeded.

Complementing the fundraising activity, #TeamTrees social media accounts amplified fan-created content, captured inspiring donation messages, and underlined the importance of every bit of support - whether monetary or not. The aim was to create a positive, inclusive campaign brand that would share ownership of the ‘20 million by 2020’ goal. The small social media team customized posts and wove stories across platforms to maximize engagement and maintain momentum after the big launch.

#TeamTrees went viral and captured the imagination of millions. The campaign crowdfunded it’s $20 million goal in 56 days. More than 800,000 people donated from 200 countries and territories. The campaign set the record for the biggest YouTube fundraiser and has raised $21.6 million to-date.

U.S. Forest Service models show the environmental impact of planting 20 million trees is like taking 1.24 million cars off the road for a year. Those trees will clean our air, filter our water, and anchor forest ecosystems. Another enduring impact will be the environmental leadership exhibited by the youngest supporters of #TeamTrees.

After starting from zero, #TeamTrees social media accounts accumulated more than half a million followers. Content on YouTube alone garnered more than 300 million total views. The hashtag #TeamTrees was used more than 453,000 times.

Earned media demonstrated the global appeal of the campaign and carried its call-to-action to an estimated audience of more than 6 billion people across 75 countries. 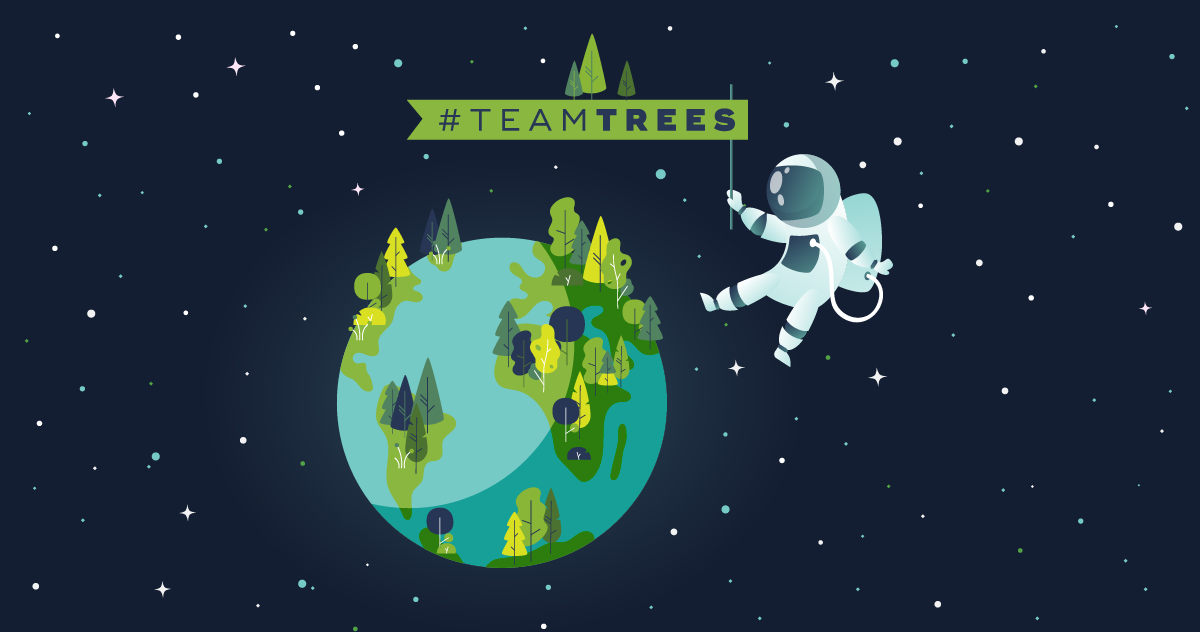 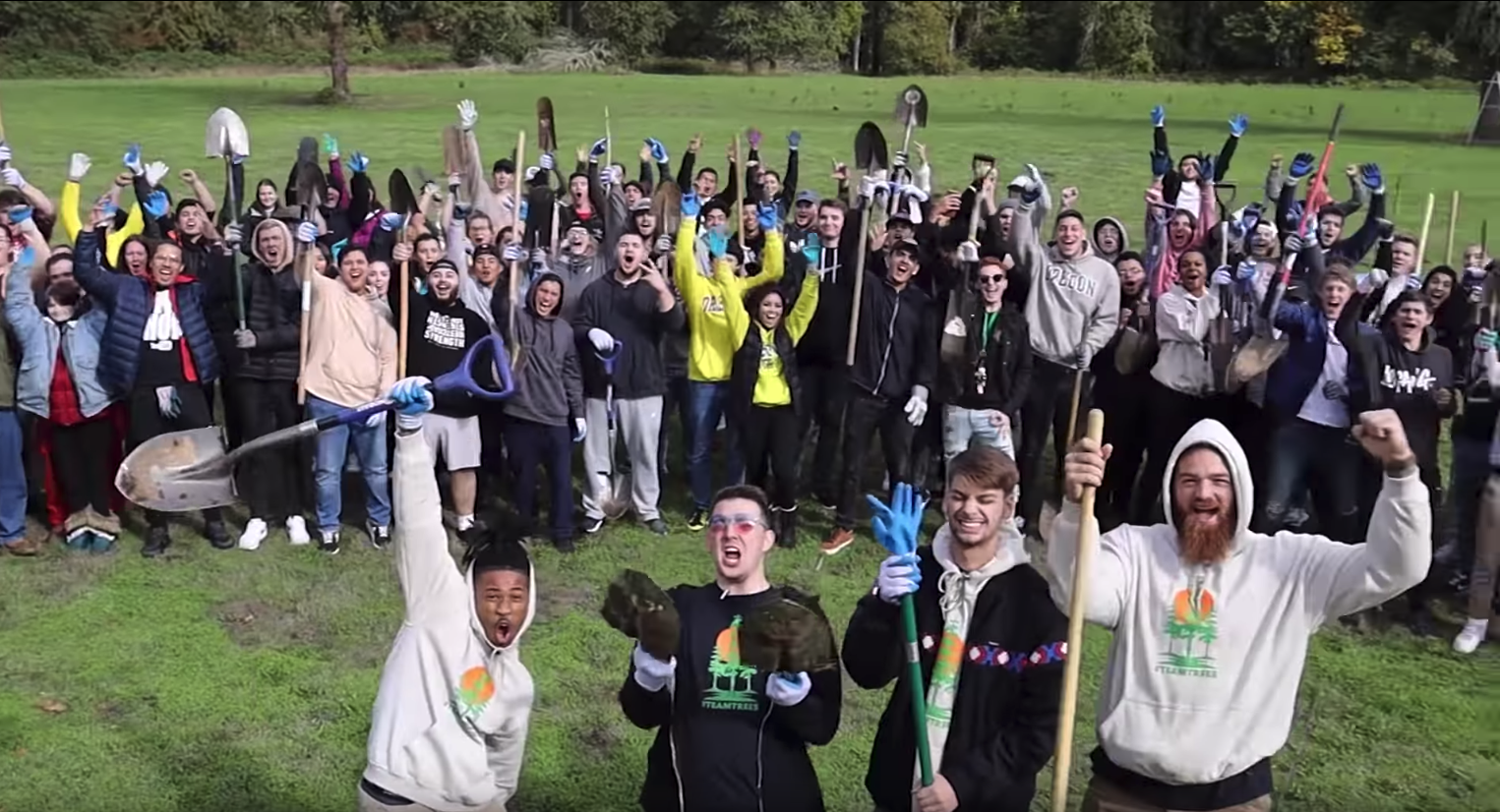