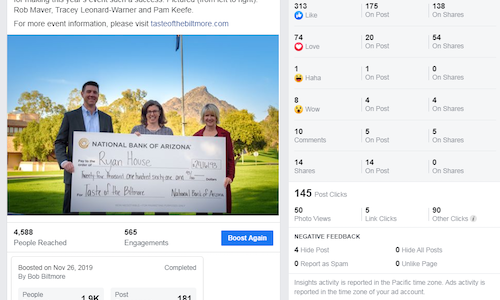 Taste of the Biltmore

Taste of the Biltmore invites guests to meet local restaurants and bars for an incredible night filled with food and drink samplings. The event was initially held as a client appreciation event for the National Bank of Arizona clients. The event became so popular with clients that it eventually, grew to become a highly anticipated ticketed event with 100% of the proceeds benefitting a local charity. Our main social media objective is to connect with our followers to build brand awareness, attract new attendees and to promote the benefiting charity and raise their cause. Moreover, each year we strive to bring more restaurants that the local audience enjoys.

Taste of the Biltmore is an event that highlights involvement within the community. This highly anticipated, upscale block party hosts residents of the central Phoenix neighborhoods, as well as guests from the entire Metro Phoenix, with proceeds benefiting local charities.

To showcase these efforts, we combine events and social media platforms to help local charities maximize their impact in our neighborhoods.

The strategy behind Taste of the Biltmore social media campaign is to drive ticket sales by creating engagement and featuring some of the buzzworthy restaurants that are participating. We use Facebook, (@NBAZTASTE) and Instagram, (@nbazinteractive), channels as the main form of advertising for the event and main tools used to recruit new restaurants. We use social media to give the audience updates about event updates, food holidays and happenings at the local eateries. Both accounts engage audiences easily with food photography and captions that have a friendly tone of voice. The post from August 30th, 2019 reached 2,228 people and had 278 engagements, from which 101 reactions (61 likes, 47 shares) and 177 post clicks. A sneak peek video about Scoopwell’s Dough Bar gathered 1,391 3-second views and reached 2,815 people 11 days before the event. Simple, photography posts such as the Pokitrition – Sushi Burritos & Poke (May 31st, 2019) that deconstructs the burrito-sushi dish reached 504 people.

In 2018, we signed up to 10 more restaurants, totaling 42 restaurants. One of the most successful posts at the time featured Wrigley Mansion’s Chef, Christopher Gross, who is also a recipient of the James Beard award. Chef Gross talks about his experience in the restaurant industry while presenting one of his delicious signature desserts called “Le Kit Cat Bar”. The post gathered 657 minutes of view time and had a 4.1K reach.

In 2017, the Osho Brewery and Distillery and the 24 Carrots video had a record-breaking engagement and views. The OSHO Brewery and Distillery reached 12K people, had 242 posts engagements, 1,698 minutes viewed and 4.1K 3s video views. On the other hand, the 24 Carrots Facebook video post for the local vegan restaurant reached 9,081 people and had 43,167 total video views. Alongside that, the video accumulated a total of 270 reactions - 155 likes, 124 shares, 51 loves, and 934 post clicks.

The Taste of the Biltmore Instagram account is growing at a fast pace. Since 2018 up until now, the total page followers grew from 1, 299 to 1,678 with the highest reach being 4082 in 2019. Our hashtag use on Instagram combined with photography attracts followers and comments which helps achieve our social media goals.

National Bank of Arizona is the only financial institution in Arizona that organizes every year, a large scale event as Taste of the Biltmore. The more we grow as an event the better we can serve nonprofit organizations that stand for unique causes. Our Facebook and Instagram profile has contributed tremendously by building the event brand in the Metro Phoenix community growing.

The successful post was the event proceeds announcement Facebook photo with the Executive Director of Ryan House and National Bank of Arizona associates. The post reached 4,588 people and had 565 engagements. Alongside that, the post accumulated a total of 420 reactions - 313 likes and 145 post clicks. Ryan House provides world-class care and programs to families in life-limiting or end-of-life journey at no cost.

Video for Taste of the Biltmore 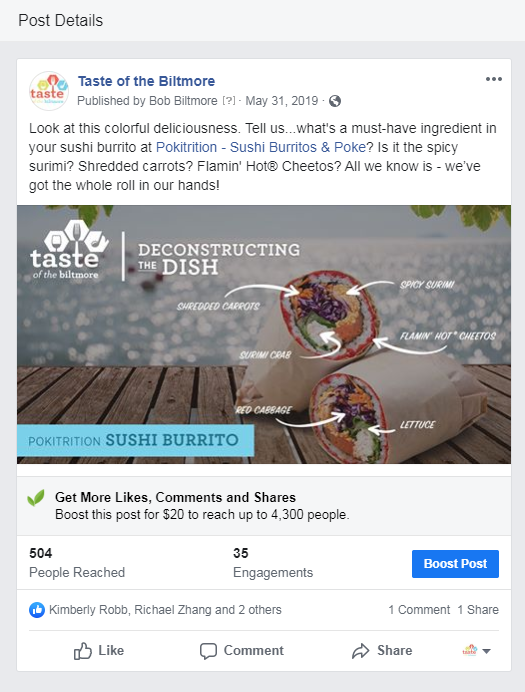 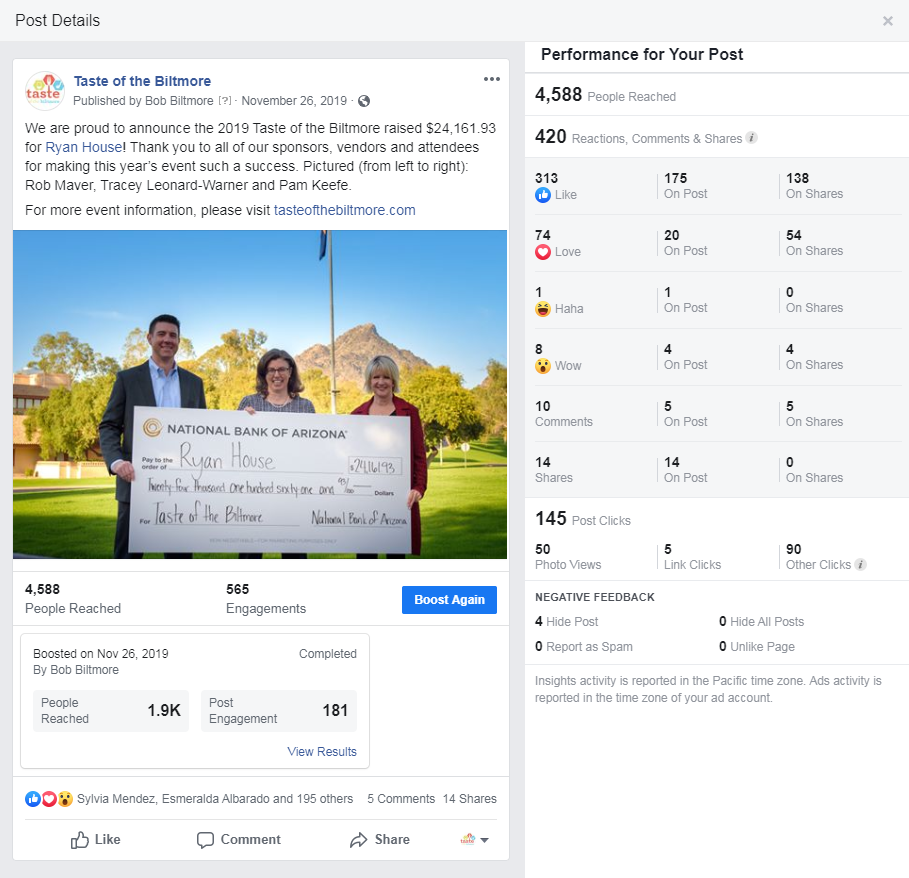