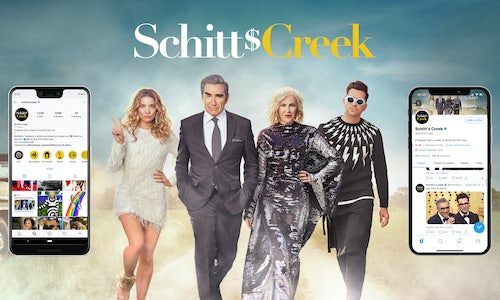 We want the Schitt's Creek presence on social media to reflect the voice of the show. As such, our social voice has been fine-tuned to ensure that when new and existing fans alike find, follow and engage with @SchittsCreek, they can easily recognize the same love and acceptance that are core values of the show.

The passion behind the Schitt's Creek social accounts is real. We are undeniable, unabashed and massive fans of the show. And sharing that genuine passion through our accounts has made for real, authentic connections with other fans of the show, and creating a space where everyone belongs. Sure, it's work — but it's also pure joy.

We firmly believe in being genuine, and on Twitter we couldn’t hide our delight, surprise and — hopefully — humility throughout the entire Primetime Emmy Awards experience. Like when we found out we'd been nominated for four awards.

Across social, we offer a Schitt’s Creek-tinged take on trending topics, the latest memes and today’s cultural zeitgeist, but our own content can speak for itself. Whether it’s 29 seconds of Alexis Rose trying to wink or saying what everyone’s thinking before the finale. And we’re not afraid to play the long game. Check out the first word of every one of our tweets from April 23rd to June 5th — and the reaction.

On Instagram, we’ve taken advantage of the space as a place to further extend the Schitt's community with the kind of lush photography Instagram users originally wanted along with countless memes. We're building out our Stories archive to provide fans another place to engage with the likes of articles, interviews, and outtakes, as well as to follow the buzz around the show as the cast attend events like the MTV Awards and the Emmys.

GIFs are at the forefront of today’s Internet language, and we’re incredibly proud that our ever-expanding GIF library is a huge part of it. Whether you know Schitt’s Creek or not, the range of expressions means there’s always a perfect GIF for the situation. And if one doesn’t exist, just ask and we’ll make it for you.

In 2019, Schitt’s Creek was the most tweeted-about Canadian television show. We garnered billions of GIF views, over 76 million Twitter impressions and over 4.8 million engagements (for an overall engagement rate of 6.4%). On Instagram, our followers more than doubled, reaching just under 500k before the end of the year. We had over 80 million Instagram impressions and 6.2 million engagements — but we really doubled-down on creating the best social community we could. For us, it's not always about numbers, it's about inclusion — and we feel the social campaign has reinforced our previous work.

One fan from Scotland tweeted the show and creator Dan Levy after coming out to her mother, while the fandom rallied to raise over $20,000 for charity in Dan’s name for his birthday.

Schitt’s Creek’s social content is relevant, consistently creative, unique and surprising — and above all our social accounts are fun, welcoming and safe places for our fans. No matter who you are, or where you are, you have a home @SchittsCreek. 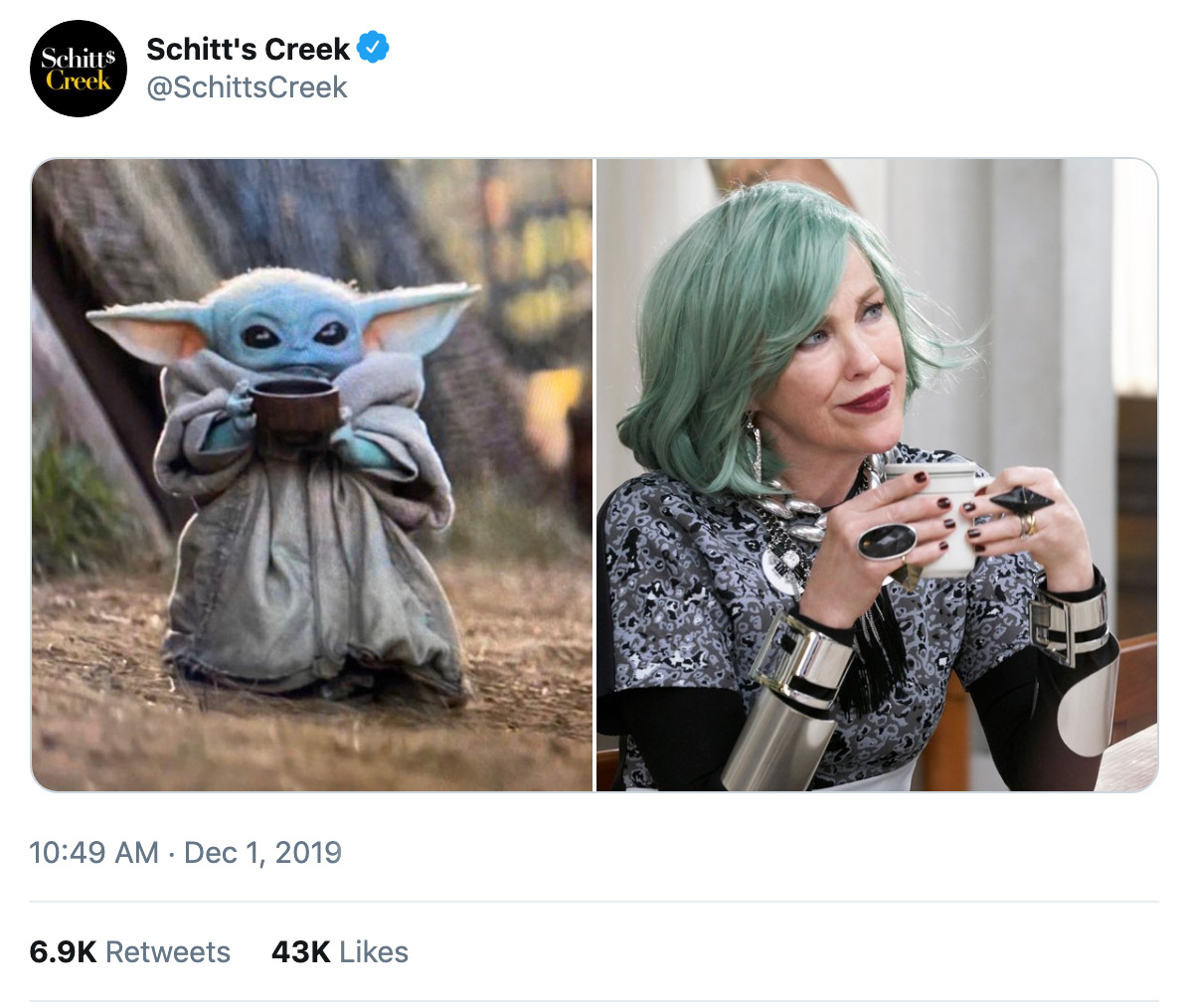 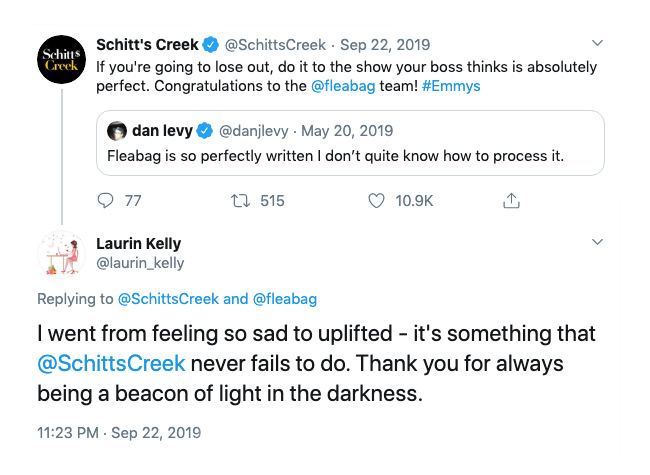 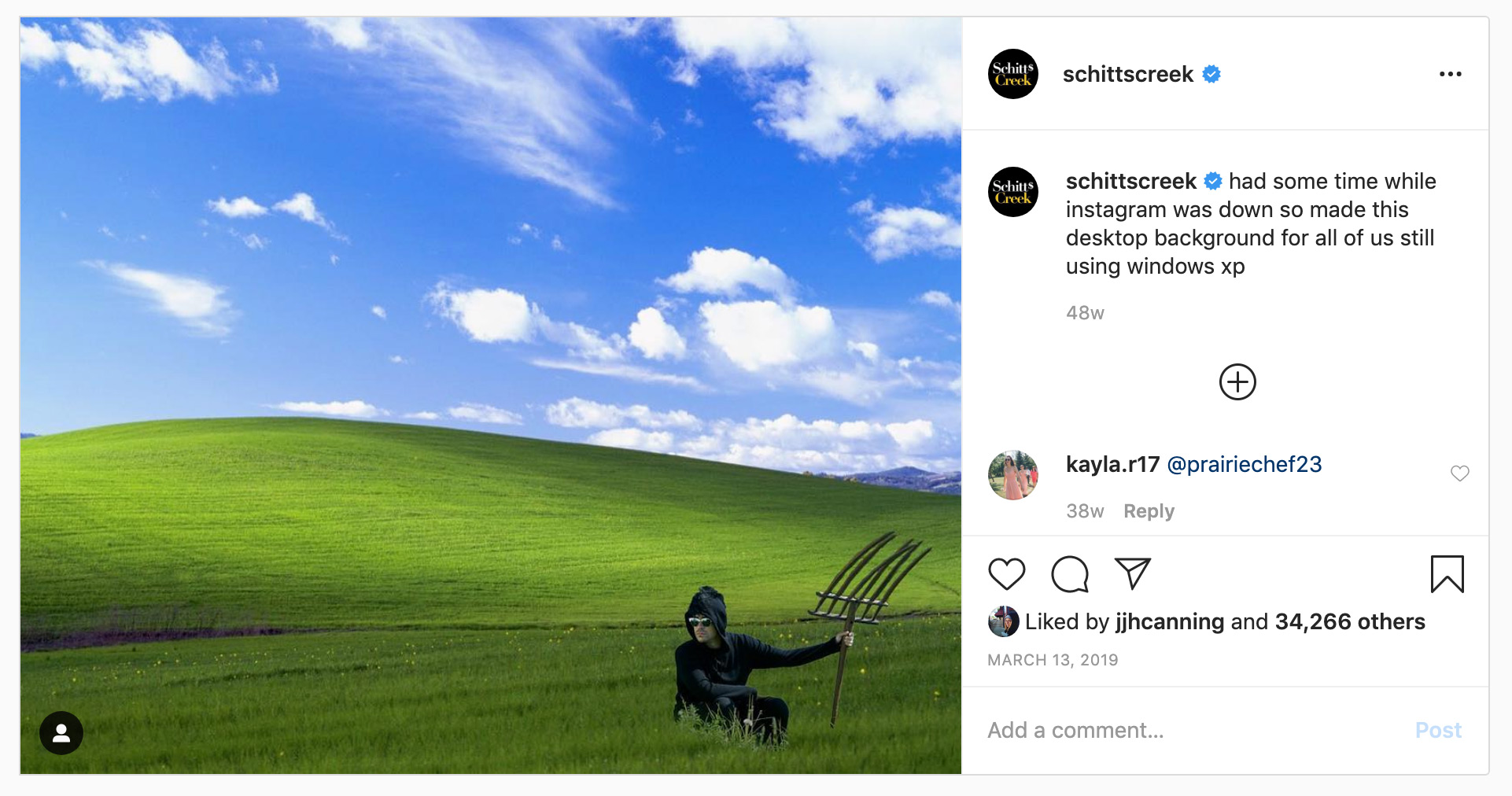 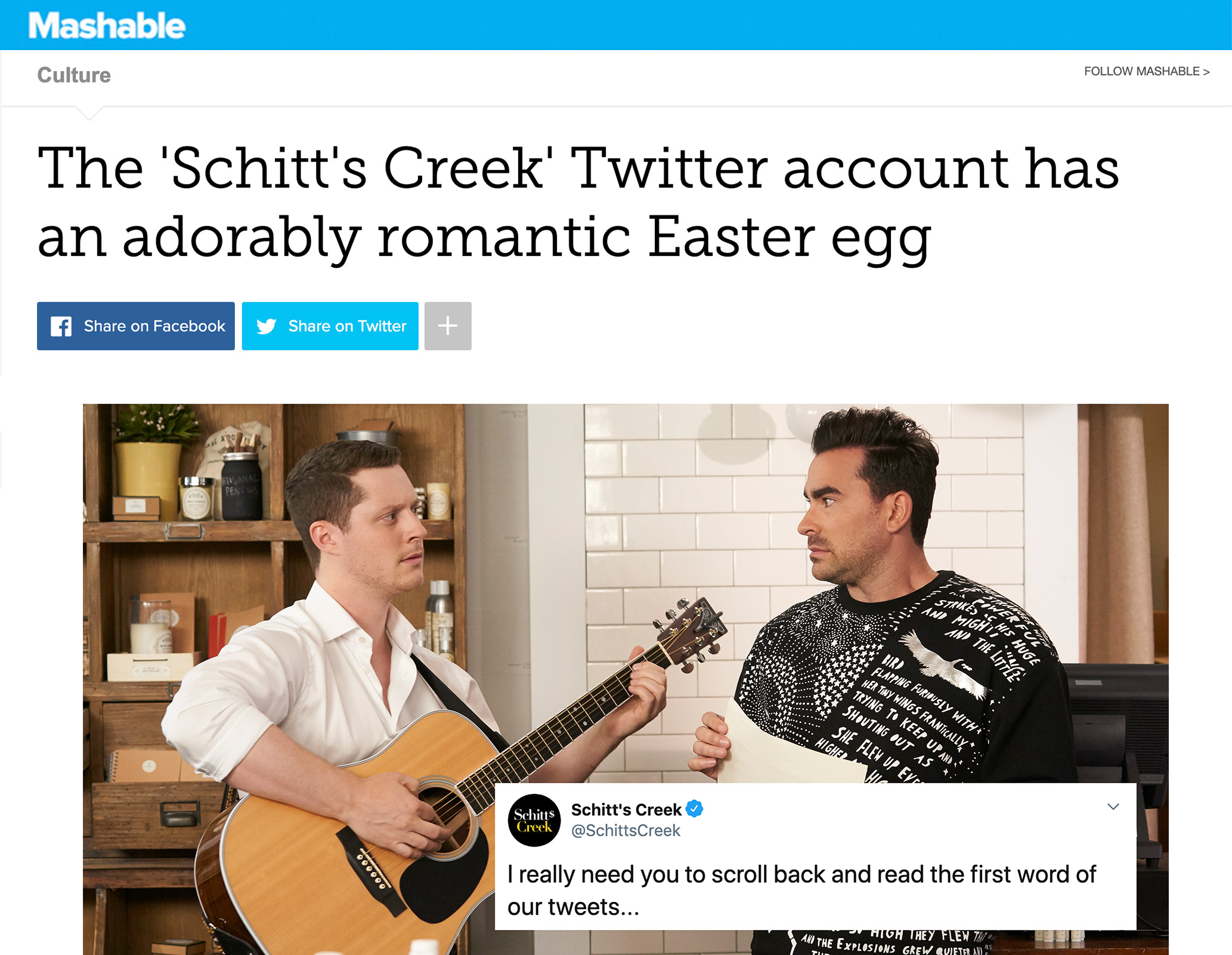 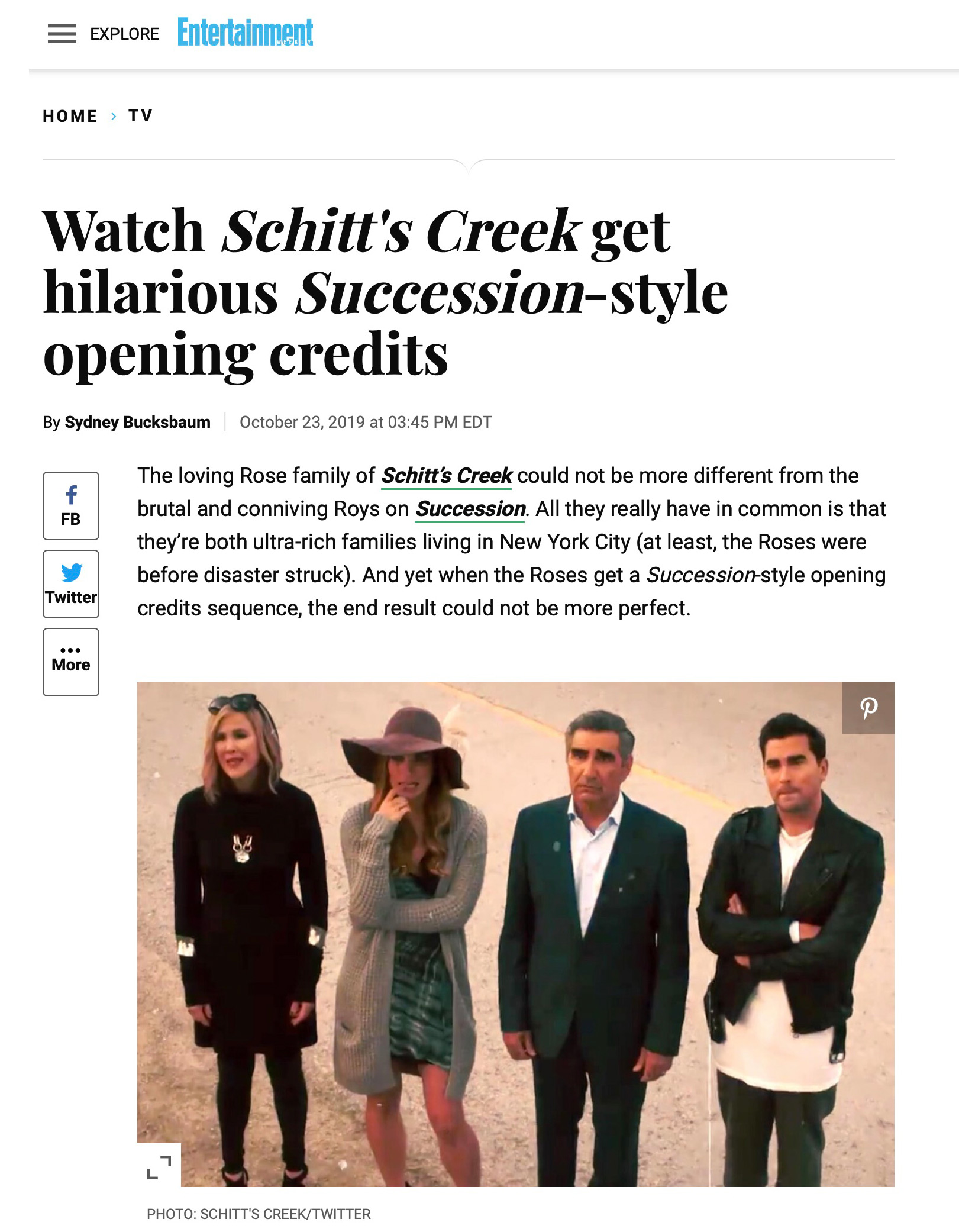 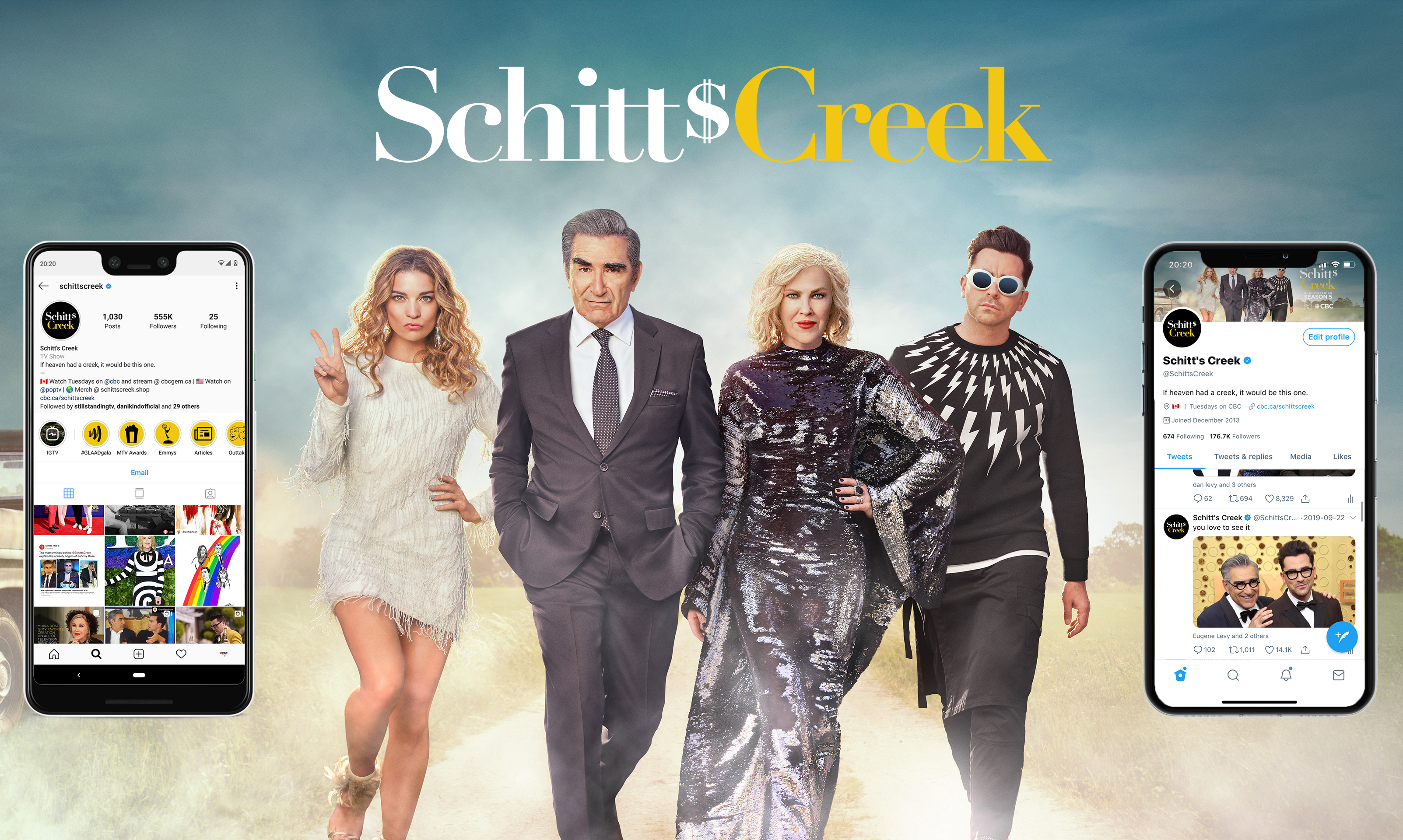