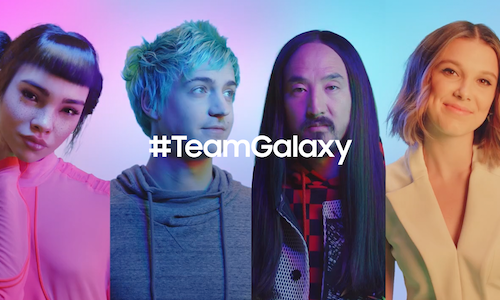 Challenge:
Samsung has long been regarded for its innovative products but competes with some of the world’s most loved brands. We needed to find a smart way to engage with Gen Z and Millennials and build an emotional connection beyond the rational product messages and showcase that Samsung is a brand for them.

Objectives:
Our objectives were to change Samsung’s user image, drive awareness and positive engagement with Gen Z and Millennials.

Audience Truths:
1. They reject traditional advertising: over half of Gen Z and Millennials use ad-blocking software.
2. They spend a large portion of their time on social media: 1 in 3 minutes online is spent on social.
3. They trust influencers for inspiration and recommendations: 63% say they use influencers to discover new products and experiences.

Strategy:
Leverage the image, relevance and reach of influencers that represent our audiences’ key cultural passion areas (gaming, music, film, fashion) to authentically reach them and emotionally connect with them.

Execution:
Introducing #TeamGalaxy. A socially-led campaign and global community fronted by a cast of global influencers our audience loves and who live by Samsung’s philosophy of Do What You Can’t. Through a series of digital films, the campaign highlights how our Team Galaxy heroes have defied barriers in their personal and professional lives, and invites their audiences to join the team by embracing the power of creativity and Samsung Galaxy technology too.

The cast:
- Milly Bobby Brown: Emmy-nominated actor and UNICEFs youngest-ever Goodwill Ambassador who uses technology and her social platform to advocate against topics like anti-cyberbullying.
- Lil Miquela: Musician, change seeker and digital avatar who uses technology and social media profile to reflect and comment on relevant societal and behavioural topics of Millennials and Gen Z.
- Ninja: One of the world’s most renowned competitive gamers and personalities bringing the sport into mass consumption, using technology to stream and reach new audiences.

The Team Galaxy campaign leveraged our hero influencers’ reach and audience to speak to Millennials and Gen Z directly. The campaign featured a 60-second film that showcased the collective four Team Galaxy heroes to illustrate a step-change in Samsung’s user image and inspire our audience. The campaign also featured 30-second individual films for each Team Galaxy hero, bespoke to who they are and their audience. The result was a campaign that had global reach and was authentic to our talent and our audience.

Generated press and public discussion reminiscent of the Pepsi and Coke wars.

And most importantly, it got consumers to reassess the brand. 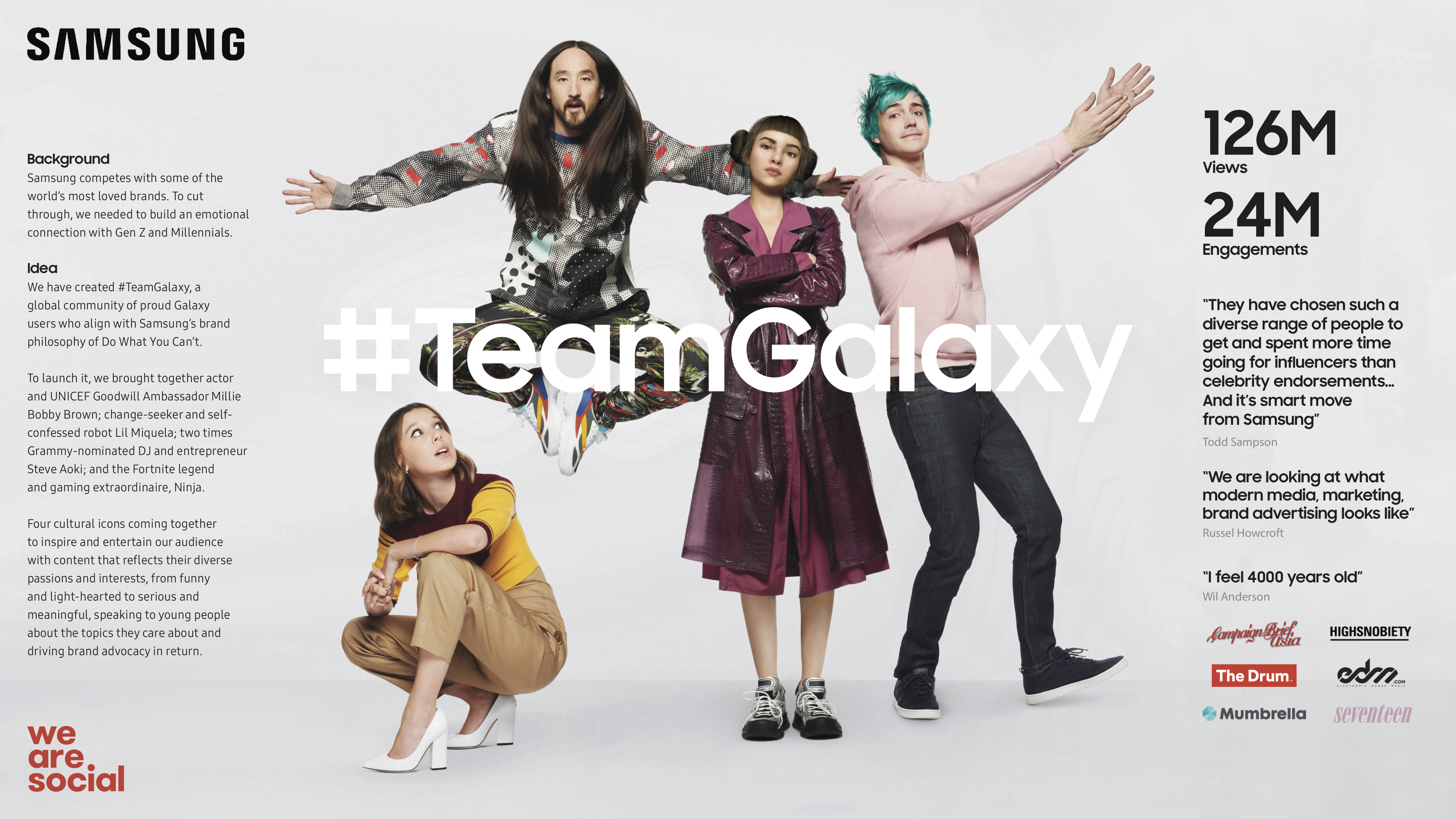 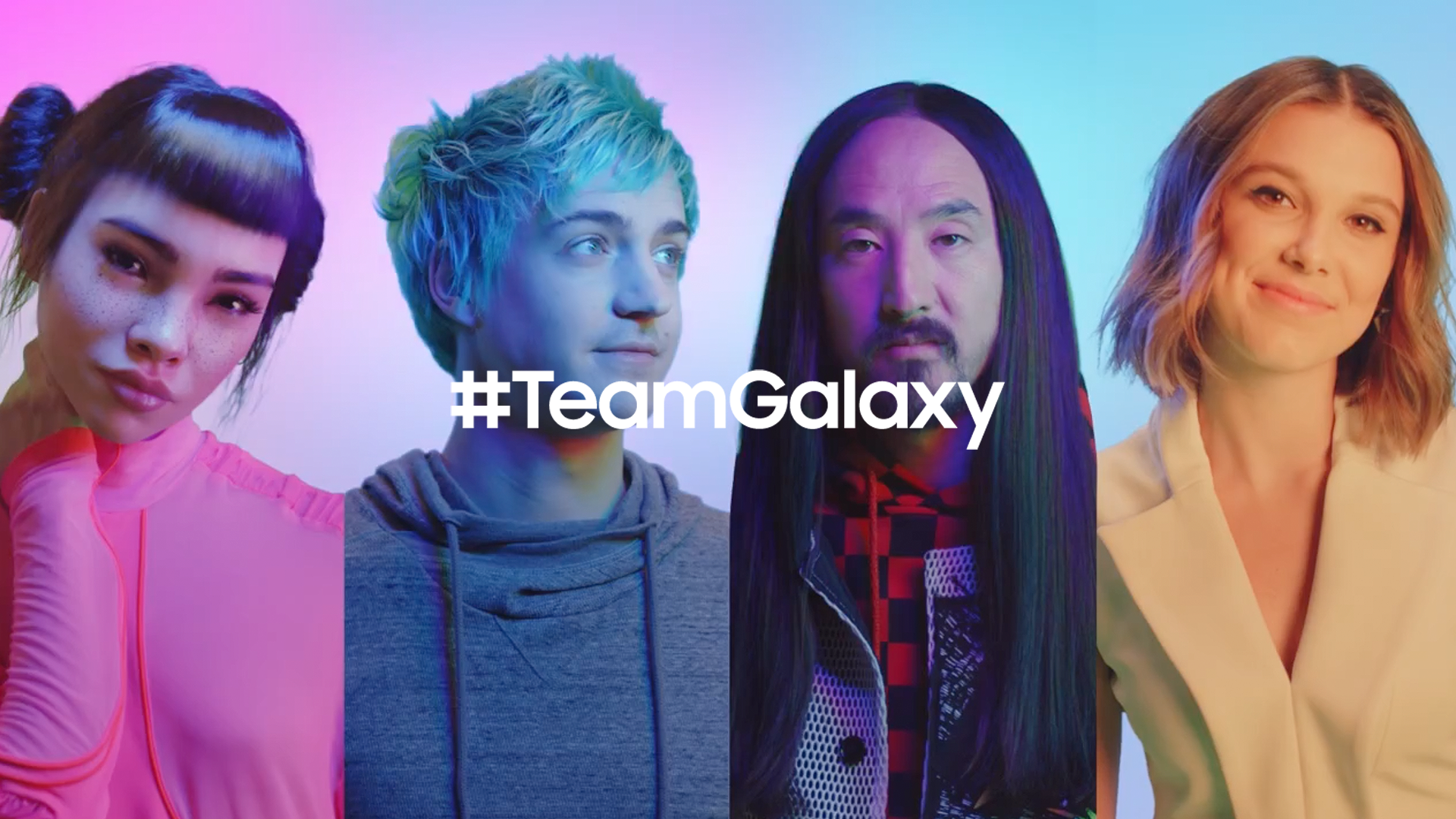 We Are Social, Samsung Electronics