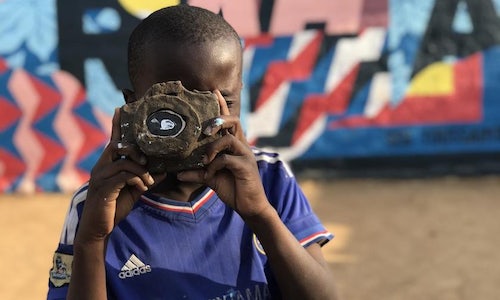 The UN Refugee Agency puts refugee voices first--so much so that we named our Instagram handle after the people we serve. Through Instagram, we have the opportunity to uniquely tell the visual story of those people who have fled war and persecution. UNHCR’s objective through our Instagram presence is simple: put refugees first. We are not there to build our brand. We are there to build theirs.

The objective goes well beyond the name of our handle. It can be seen in the rubble that Syrian children are using as a slide in their devastated communities. It’s the 8-year-old South Sudanese child who proudly holds up the toy truck he made out of cardboard in a refugee camp in the Democratic Republic of the Congo. It’s the young refugee who takes over our Instagram so you can see life through their eyes. With every scroll and swipe of the @Refugees feed, those who have fled and those who support and stand with them are a mainstay.

The most critical element of the strategy for @Refugees is to put refugee voices first. Scrolling through their grid immediately unearths thousands of visuals of refugees hailing from and living on every continent. In putting refugee voices front and center, UNHCR aims to reach a broad section of audiences that are both familiar with international issues and those who could find common ground with refugees. In order to achieve this, we leverage a diverse set of tools and tactics. One of the most powerful tools was raw video and low-tech photos. In an age where brands rely heavily on polished advertisements and commercials shot on professional cameras, UNHCR challenged this practice. In addition to harnessing the work of an award-winning pool of photographers, they also encouraged hundreds more of their 16,000-strong staff to “take out your phones.” This simple charge opened doors to more of the 70,000,000+ displaced people in the world than ever before and led to 20% of @Refugees top posts either entirely or partially shot with an iPhone. The @Refugees channel demonstrates the adaptation to this in-the-moment approach better than any other presence on the platform.

Special initiatives were also a major part of UNHCR’s Instagram strategy. Mixing into the drum beat of posts featuring refugee voices, UNHCR inserted signature photo series, celebrity supporter content, and participatory campaigns to help drive traffic to the thematic and geographic areas that drive empathy toward the refugee cause. One such example was a photo series done in partnership with @GreggSegal, author of Daily Bread. The photo project spotlighted the hardship that Venezuelan mothers and their children faced after they were forced to flee their country. Shot from above, the striking visuals reached more than 750,000 people over the course of five posts and lead to more than 1,000 new followers in a two-day period. Other initiatives, like Ben Stiller’s conversation with a set of 8-year-old twins, and Special Envoy Angelina Jolie’s advocacy missions have all attracted tens of thousands of new community members to @Refugees. Once there, they were able to continuously get an insider views into the lives of refugees through their eyes.

A final key to the @Refugees Instagram strategy were takeovers and targeted stories. Over the course of 2019, UNHCR built on its successful strategy of allowing both influencers and refugees alike digital real estate on their channel. With refugees always at the center, famous model and photographer Helena Christensen is able to take both the @Refugees audience and her own to Rwanda to document a special refugee-led fashion show. The same tactic allows Arash, a young Syrian refugee, to walk the halls alongside business and government leaders at the first-ever Global Refugee Forum to show what matters most to the refugees themselves. Whether a South Sudanese videographer or a British newscaster, a diverse set of takeovers anchored @Refugees pursuit of storytelling to a wide audience on one of the most important issues of our time.

In 2019, the @Refugees Instagram channel went to the next level. By putting refugees and people forced to flee their homes front and center, the end result was tens of millions of people getting exposure to their journey. In addition to humanizing headlines and statistics, the overall performance marked a banner year for UNHCR, the UN Refugee Agency. The year marked a 65.57% increase in followers, with the social presence crossing the 1 million follower threshold in the final month of the year. Over that same stretch, users either clicked the like button or left a comment more than 5,000,000 times. Through a mix of raw footage and polish social videos, we amassed more than 8,000,000 million video views equaling a combined 13,000,000 engagements. It’s also noteworthy that while the relative performance indicators tell a story, the sheer quantity of successful posts is equally impressive. To demonstrate this, UNHCR published 207 unique posts that reached more than 100,000 people organically. From takeover to special projects to an insider perspective of the communities UNHCR serves, Instagram acted as the vehicle for us to transport millions of people to another world. When they got there, they found the amazing resilience of people they may have not known existed otherwise. 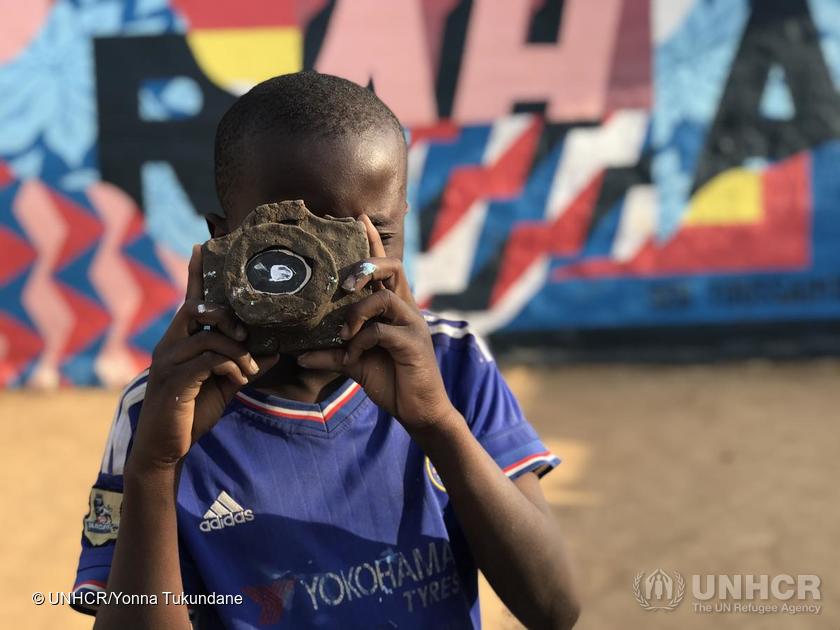 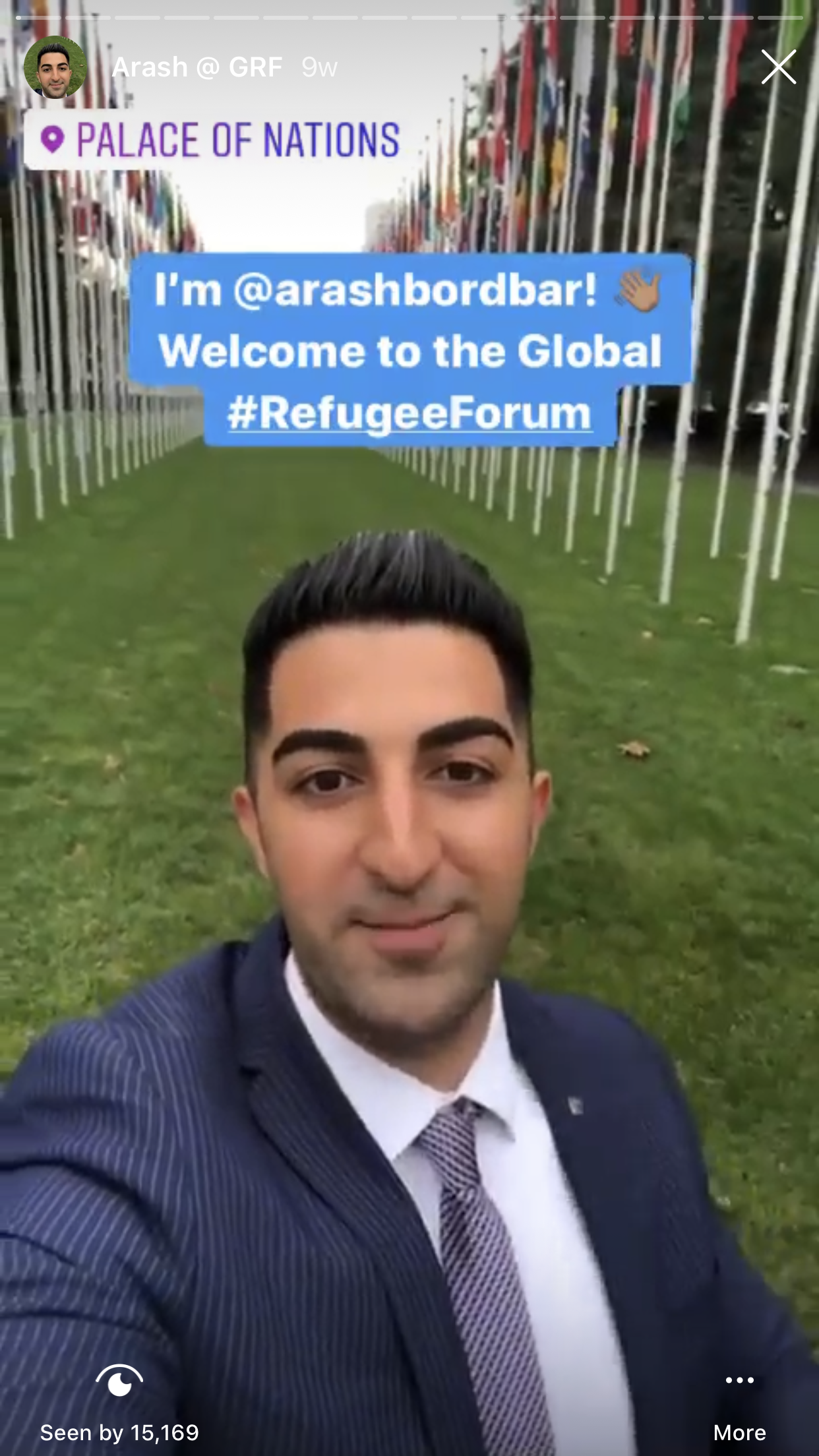 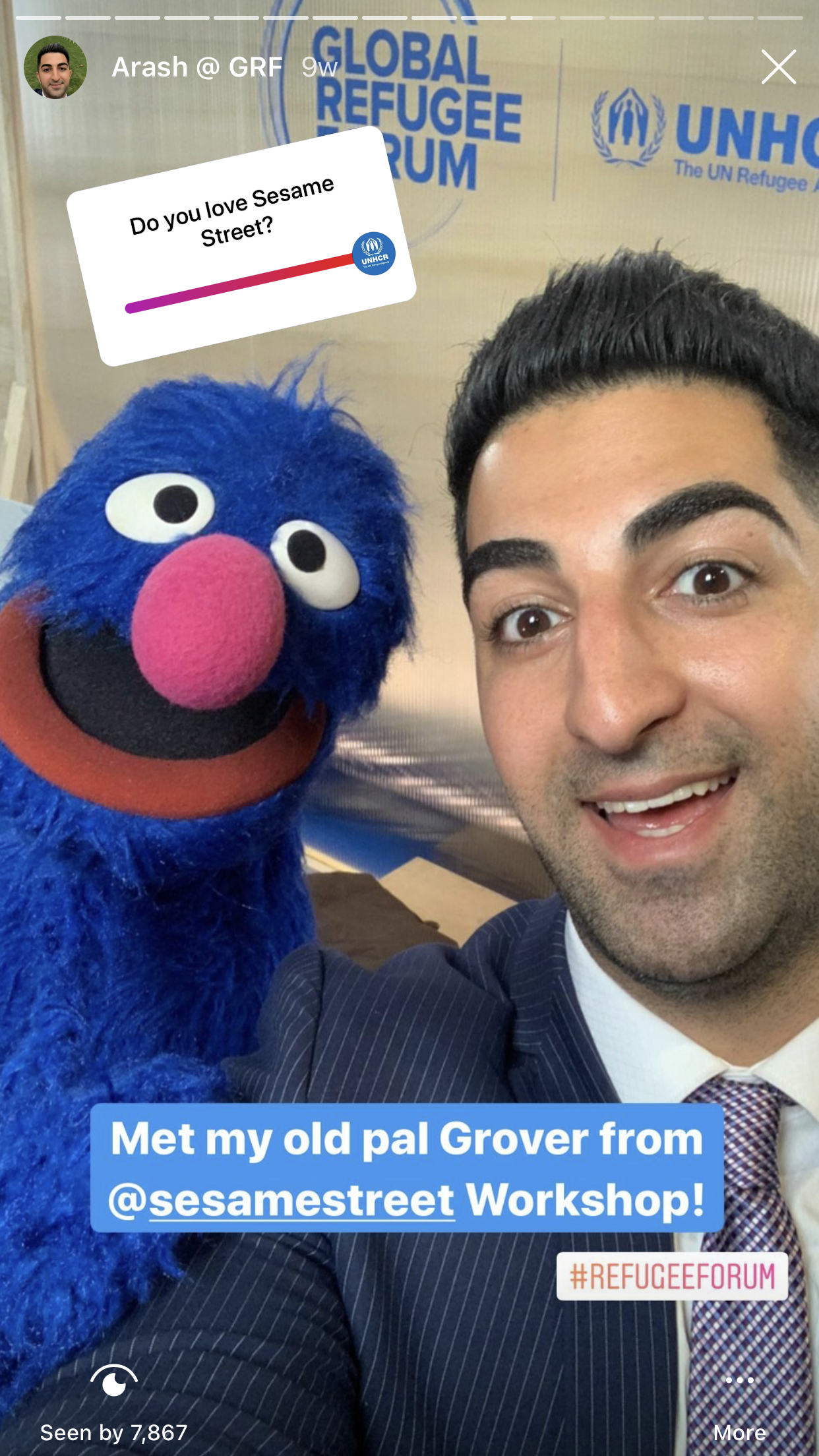 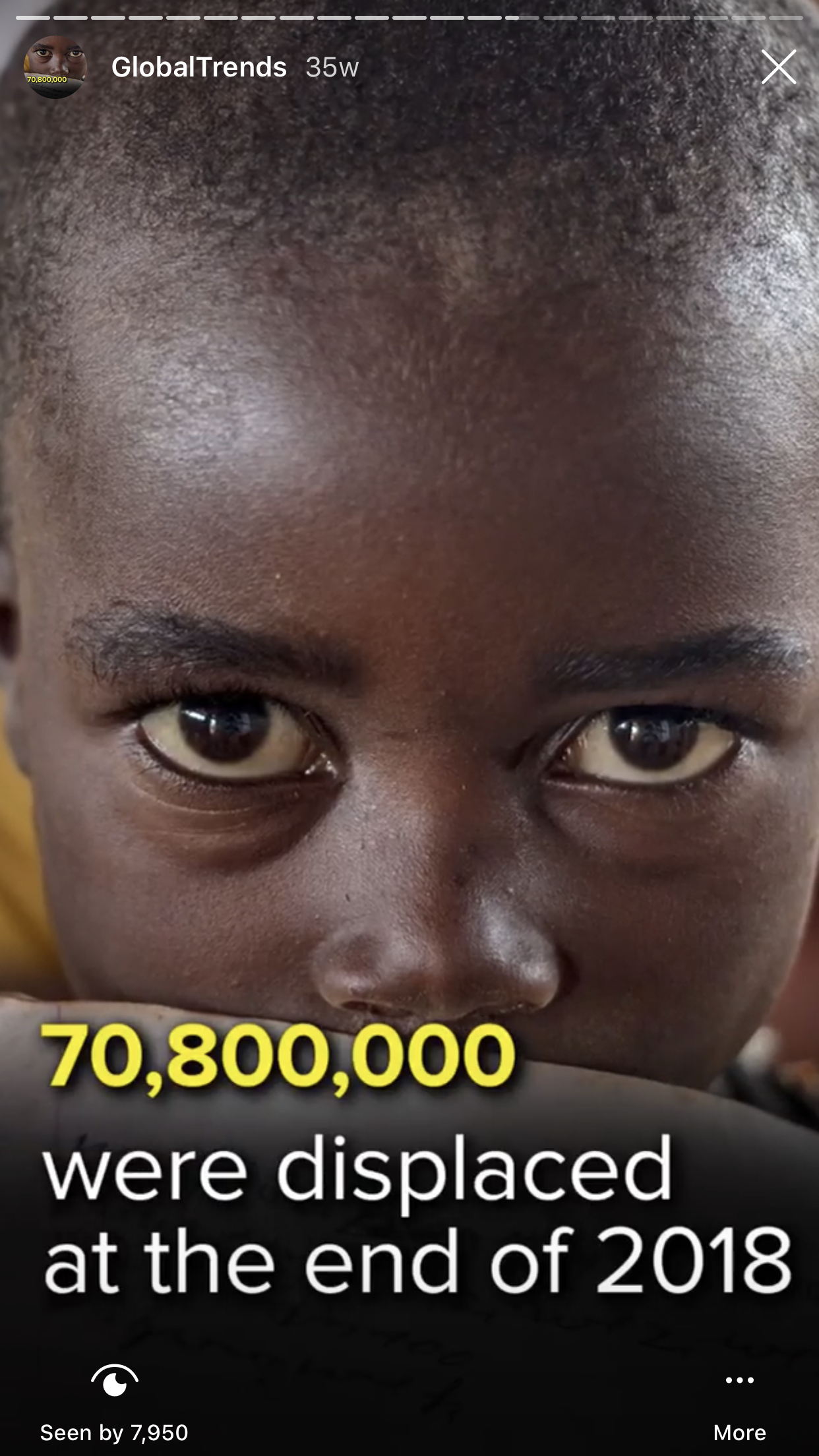 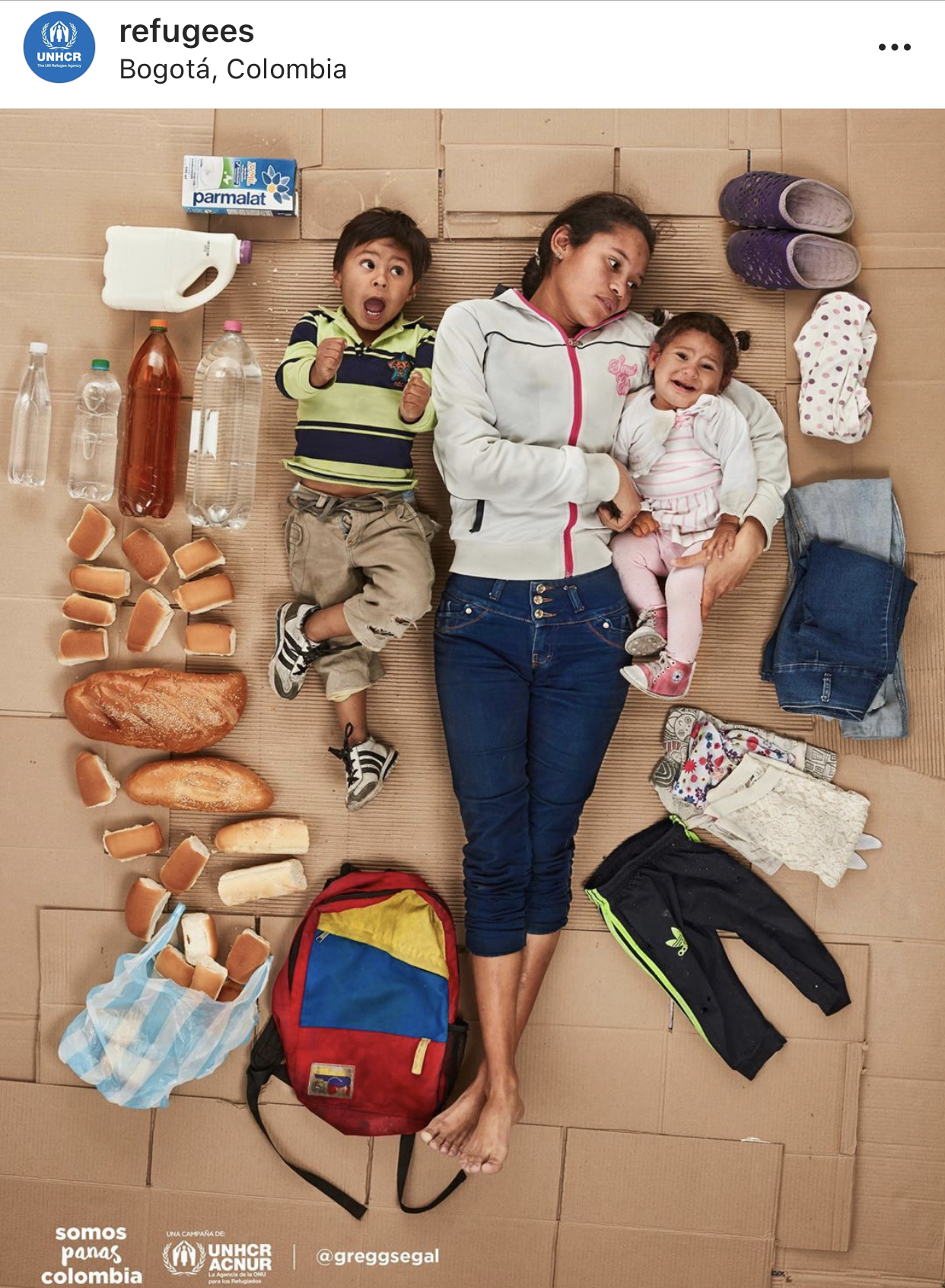 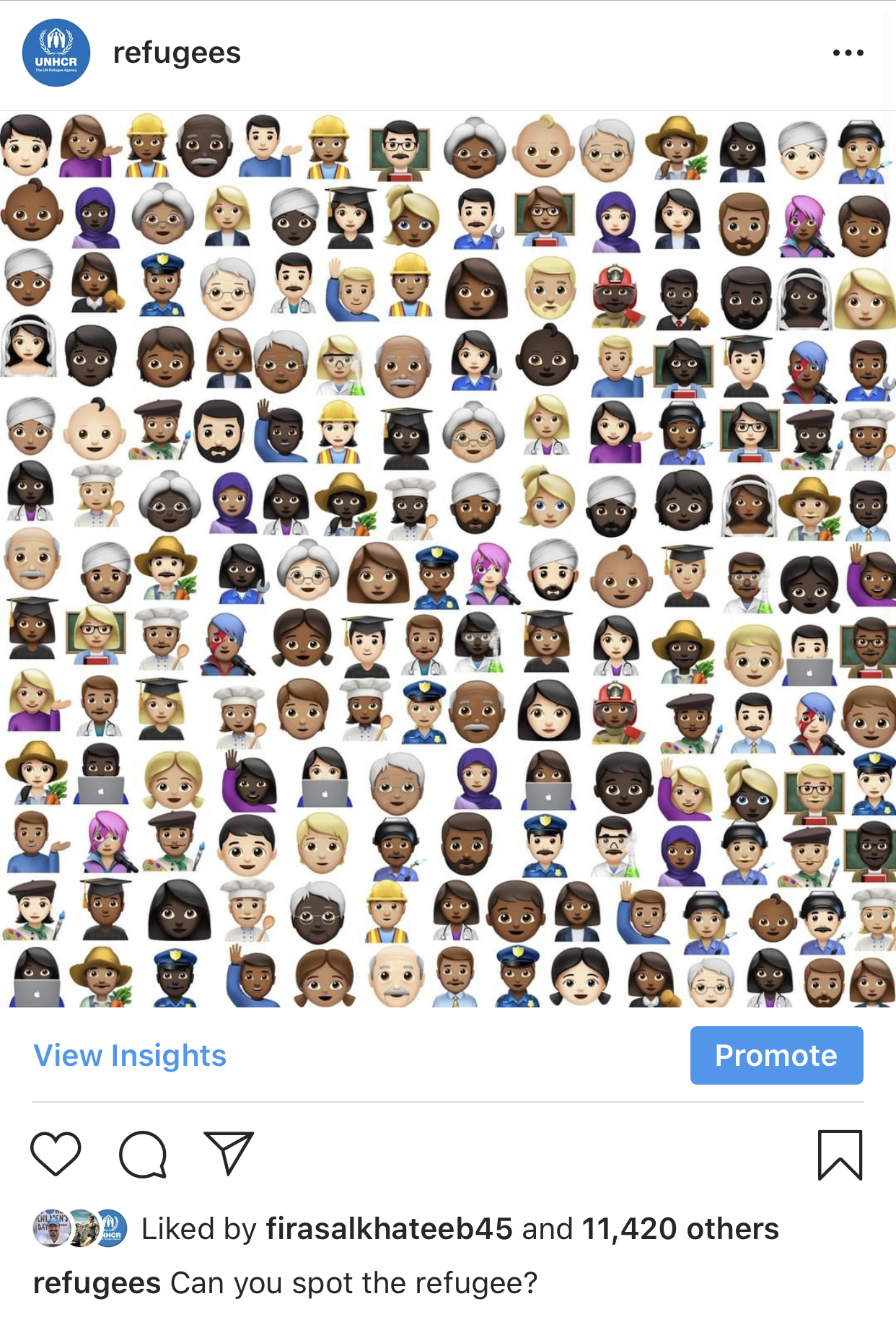 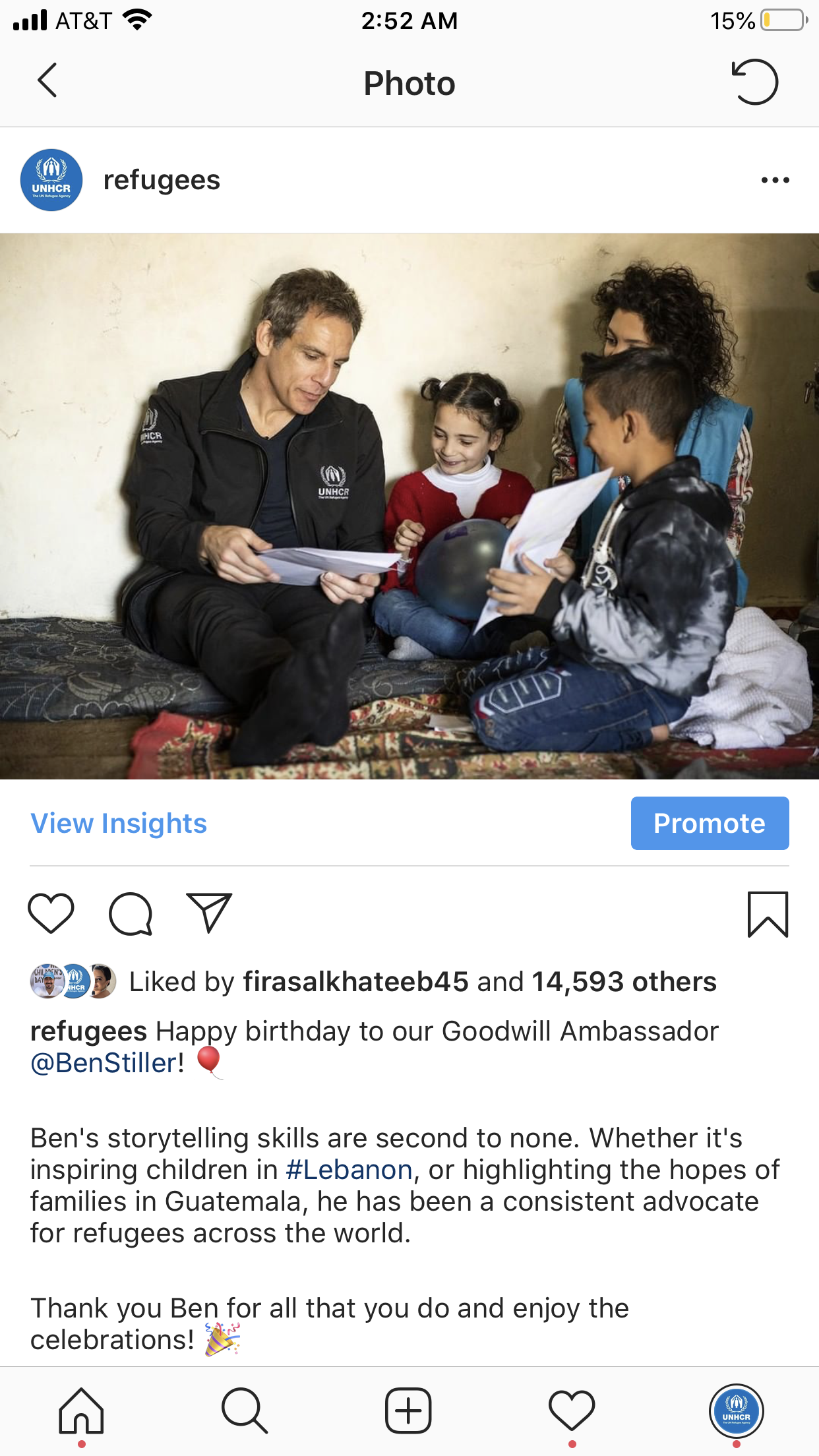 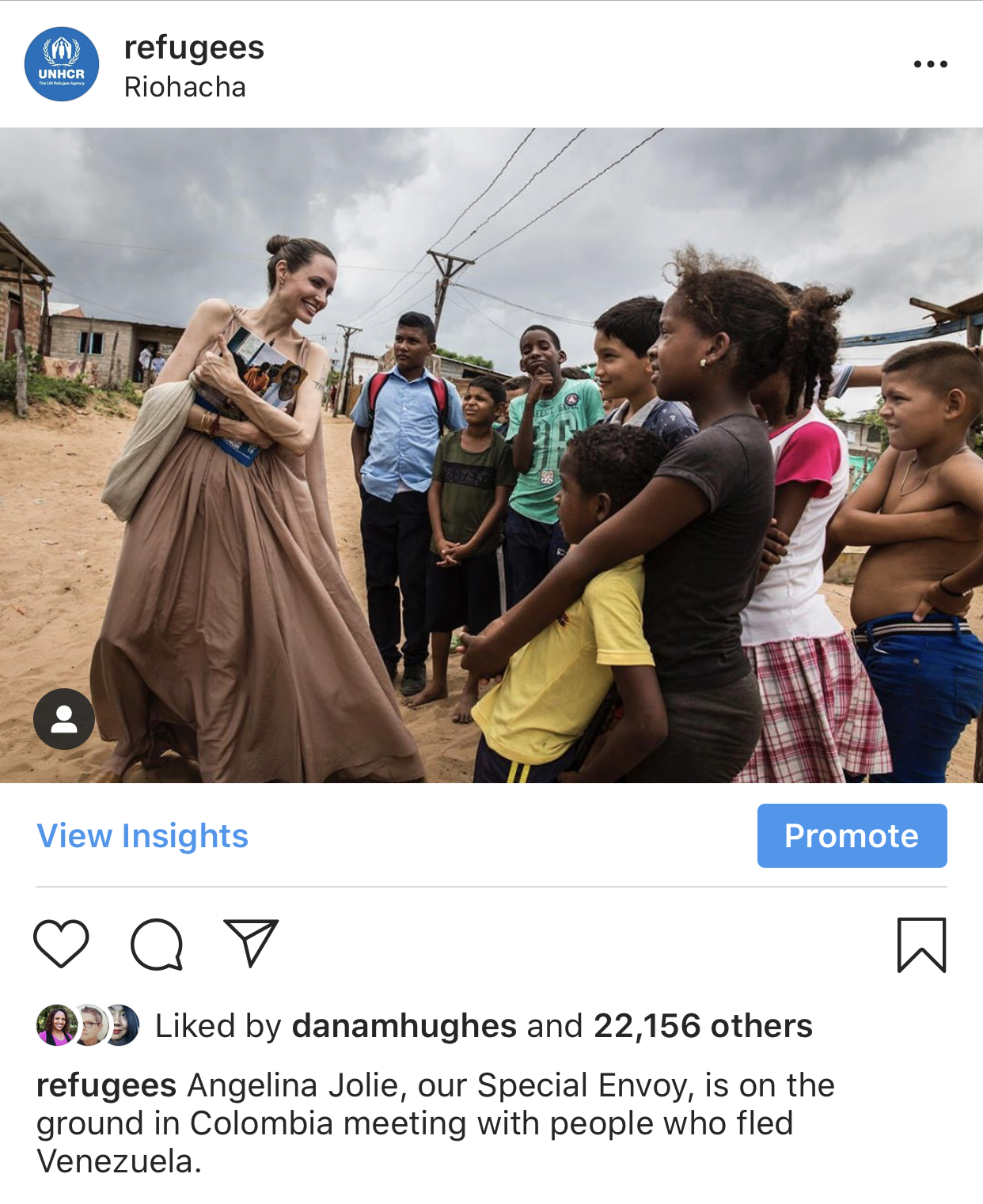 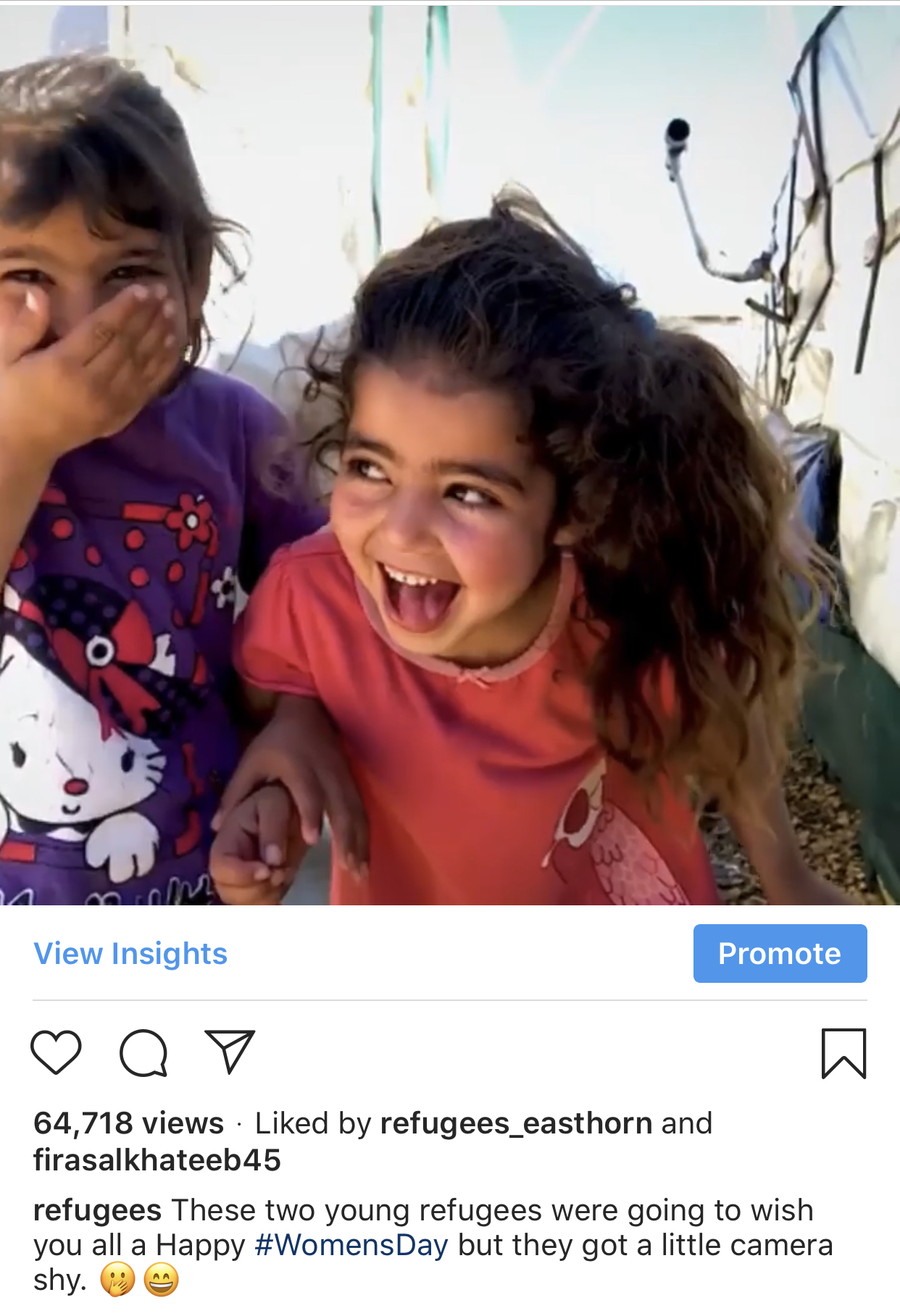 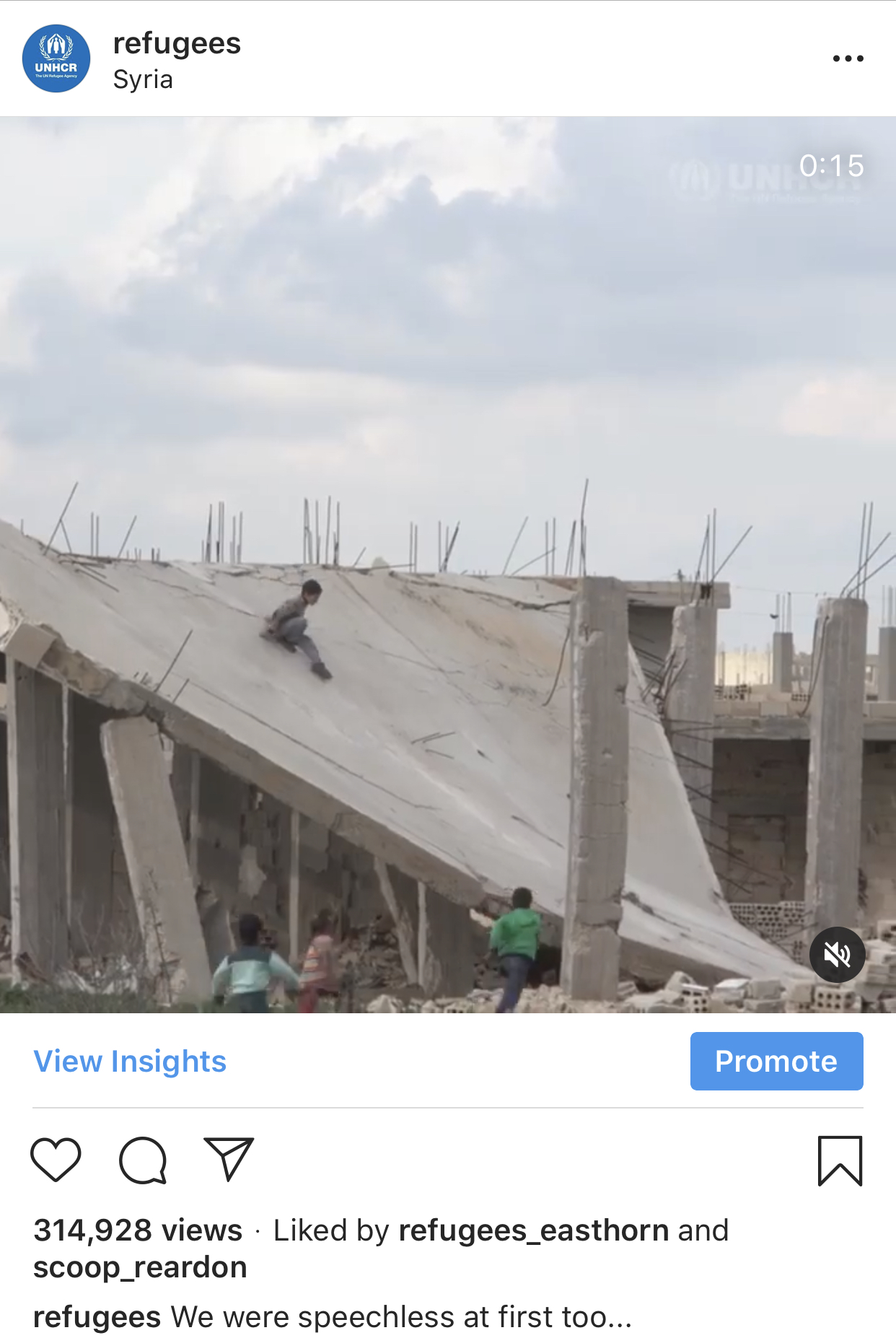