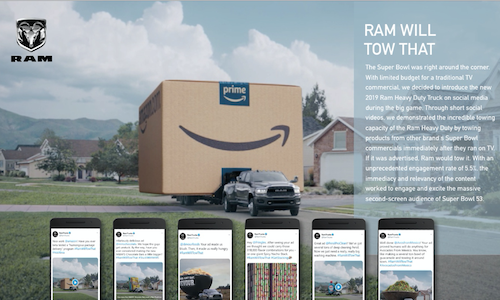 “RAM Will Tow That”

As Super Bowl LIII approached, so did the release of the new 2019 Ram Heavy-Duty Truck, equipped with more towing capacity than any other heavy-duty truck on the market. With little appetite or budget for a traditional Super Bowl TV commercial, we decided to launch the Ram Heavy-Duty Truck on Twitter during the Big Game. For a brand accustomed to an annual big-budget Super Bowl commercial, we had our work cut out for us if we were going to get noticed with a fraction of the production budget and media spend during the biggest advertising event of the year.

Our objective was clear and lofty: Capture the attention and interest of the Super Bowl LIII audience on Twitter through a breakthrough creative idea that showcases the best-in-class towing capability of the new 2019 Ram Heavy-Duty truck.

The "Ram Will Tow That" campaign strategy was simple. Since Ram didn’t have the budget for a Super Bowl commercial, we’d tow other brands’ products that did. With towing capacity being a primary factor in the purchase decision for heavy-duty truck buyers, this approach gave us the opportunity to showcase that the Ram Heavy-Duty Truck can tow more than any other heavy-duty truck on the market.

With millions of viewers tuned into the game through their TVs and social media feeds, we capitalized on the social media conversation and momentum around other brands’ TV ads without having to purchase one of our own.

It was a win-win for Ram and the brands who chose to partner with us. While we showcased our best-in-class towing capability, our partner brands such as M&M'S Chocolate, Amazon, Pringles (Kellogg's), Avocados From Mexico, Persil ProClean, and DEVOUR FOODS (Kraft) - gained additional (free) exposure.

To bring "Ram Will Tow That" to life, we partnered with other brands, including M&M'S Chocolate, Amazon, Pringles (Kelloggs), Avocados From Mexico, Persil ProClean, and DEVOUR FOODS (Kraft). We collaborated with each brand to create a co-branded towing video. For efficiency, we tapped into truck footage captured at a shoot for a different commercial and used CG to integrate the brands’ products during post-production.

With many stakeholders involved, we created a "run of show" document to serve as the master timeline for the campaign, inclusive of all approved content and precisely when it would be served throughout the game. If we were going to pull this off, we needed our timing and execution to be flawless.

With limited paid media dollars, we prioritized Twitter as our primary channel because it’s where people talk about the Big Game ads in real-time.

Through short social videos, we demonstrated the incredible towing capacity of the Ram Heavy Duty by towing products featured in Super Bowl ads, in real-time. If it was advertised, Ram would tow it. Leveraging momentum from other brands’ TV ads, the idea allowed us to respond in real-time with highly relevant content that connected to what TV viewers had just experienced, within a matter of seconds.

To play up the drama, we towed absurdly large versions of other brands’ products, giving the campaign a light-hearted feel. Whether it was five giant M&M'S Chocolate Bars, one 35,100 pound bowl of guacamole made with Avocados From Mexico, or a ginormous Amazon package out for delivery, we towed products from other brands’ ads all game long.

The "Ram Will Tow That" campaign enabled us to do more with less.

Instead of 30 seconds, we spent more time with our audience. 4 hours to be exact.

Instead of one conversation, we had many conversations. From chocolate lovers to guacamole enthusiasts, we engaged with prospects outside of Ram’s usual truck-loving social following.

Instead of a one-way message, we had two-way conversations with brands and Twitter users alike, amplifying the reach of the campaign one commercial at a time.

The campaign crushed industry benchmarks with a 5.5% engagement rate (paid and earned), the highest in Ram’s history. With 95% positive sentiment, we have no doubt that our Twitter campaign made Ram a winner on game day. At the end of it all, America was left with one certainty. Whatever it is, Ram will tow it!

Video for “RAM Will Tow That” 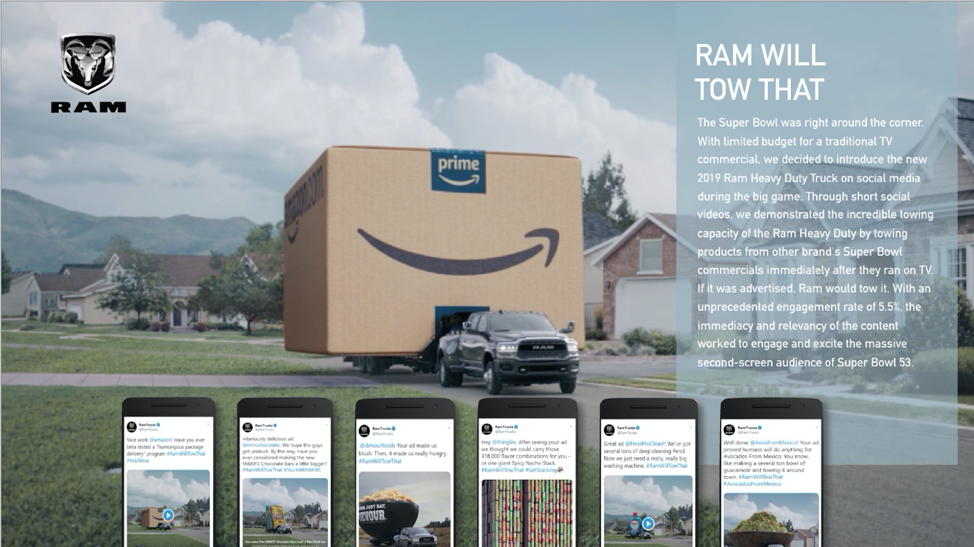