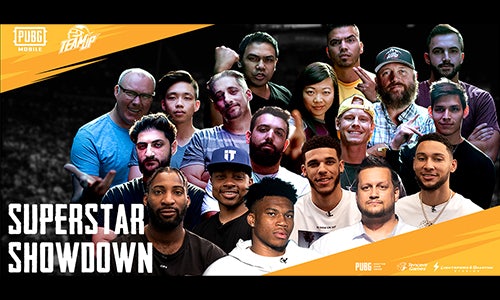 Superstar Showdown is a 4-part online video series highlighting PUBG MOBILE’s new game mode launch: "4v4 Team Deathmatch", leading to the appropriately titled "TEAM UP" campaign. Viral Nation collaborated with Tencent Games throughout the entire process. Both parties knew that we wanted to leverage the "team" aspect of this new mode, and there was no better way to get that message across than with relevant professional athletes.

Viral Nation worked with Tencent Games and brought on 5 professional basketball stars: Ben Simmons, Lonzo Ball, Isaiah Thomas, Andre Drummond, and this season’s MVP, Giannis Antetokounmpo, 4 members of FaZe Clan, 4 PUBG MOBILE Influencers, and 4 Superfans to compete in an exhibition tournament. Teams were drafted in true mobile gaming fashion, onboard a custom gaming bus, and participants competed to establish the draft order and pick which basketball star they would team up with. Ben Simmons, Lonzo Ball, Isaiah Thomas, and Andre Drummong served as team captains, while Giannis Antetoukounmpo makes a special appearance later in the series.

Tencent Games worked closely with Viral Nation every step of the way, trusting Viral Nation to execute the collaborative vision. Viral Nation worked with the professional athletes to create experiences that would generate authentic and organic content, which made the production into a fun experience that got them all invested into the game.

Next we sourced 8 influencers ranging from PUBG Mobile creators to members of the FaZe Clan, and 4 superfans who would get to experience what it's like to be on the brand side of the game, and have a unique experience as part of an amazing collaboration.

To bring everything together, we knew we needed a charismatic host who could bridge the world of gaming and sports. With that in mind, Powerbang Gaming was brought onboard, as he is already one of the biggest names in PUBG Mobile, and frequent collaborator with the brand, as both talent and commentator and content creator.

With the amount of talent that was brought onboard, scheduling quickly became our biggest challenge. There were 2 production days, first one with all the non-basketball talent, and second one with all talent. To add to the complexity of this, we had 4 of our professional basketball players for 5 hours on the day of production, and Giannis Antetokounmpo for 1 hour. This exponentially increases the challenge to work within their availability and still produce a 4-part web series.

Viral Nation collaborated with our producers from the campaigns inception to ensure the entire production was ironed out well in advance of production, and the appropriate production team was put in place to not only handle the work, but also to handle the calibre of talent that would be involved.

While production was being handled, Viral Nation's influencer marketing team developed a full influencer/social strategy to promote the web series that would ultimately generate 4x our initial goal. While exceeding KPI's is a common occurrence with Viral Nation and our clients, it really boils down to how much we value and appreciate our relationships with each influencer, and our position in the industry that has solidified Viral Nation as an organization that is here to fight for both creators and the brands we work with. This allows us to extract more value out of each creator that we collaborate with.

Once production came to an end, our team quickly pivoted to begin executing on our marketing strategy to launch the video series. To get people excited, we created a 30 second trailer that covered the plot, main themes, and emotional triggers throughout the 4 episode series. The trailer was released through all PUBG Mobile social channels, including professional basketball talent, utilizing their massive social media platforms (Facebook, Instagram, Twitter) to create excitement for the release of the video series. The trailer was also distributed via Social Publishers generating over 3.7M impressions.

Once episodes were launched our top influencers followed up with their vlog content that was captured on site during the production. This prolonged the existing impact we had already left through our collaboration. Now that fans have been introduced to the collaboration between PUBG mobile andthe athletes, it was the perfect time to retarget the viewers and user acquisition videos were launched on Facebook, Instagram Stories, and Twitter through a familiar face, by whitelisting on the professional basketball players channels.

By maximizing exposure through all available channels, we exceeded our KPI goal. The content generated ample positive sentiment and established the PUBG Mobile brand across all marketing efforts harnessing thousands of comments. 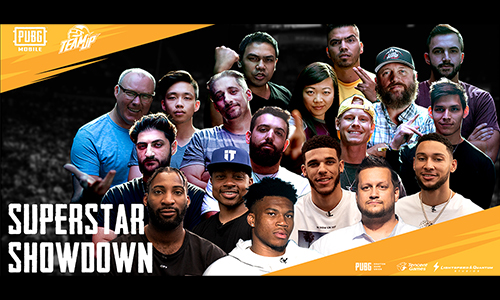