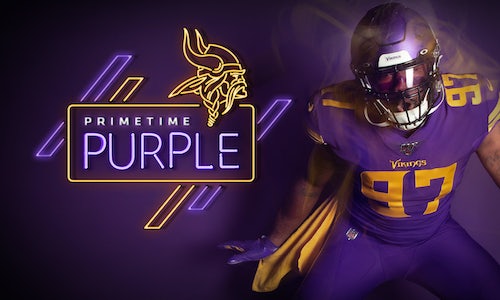 In 2019, the Minnesota Vikings had the opportunity to wear their alternative uniforms at home for the first time since 2016. The challenge was that these uniforms were formally called the Color Rush uniform, after the since-ended NFL game theme. A new name, Primetime Purple was created to give these uniforms a unique and elevated status, to increase brand affinity and merchandise sales. The neon lights design concept was used to reflect the bright yellow numbers that jump off this uniform, and the phrase “Lights On” was used to highlight that all lights and eyes would be on the Vikings and U.S. Bank Stadium for this Primetime game.

The Vikings set out to create a cohesive campaign that would live across a variety of mediums - television, web, email, merchandise, in-stadium, social media, influencer marketing, print and out-of-home.

First, the Vikings held a photo and video shoot for Primetime Purple with two of their star players. An all purple set was constructed for the shoot. Painted props and colored eye black were used to reinforce the all purple and gold theme.

To kick off the campaign, a teaser video was created to introduce the “Lights On” concept and new, Primetime Purple name. The video was posted via social media.

Targeted email campaigns were created to inform the fans about the Primetime Purple game, as well as sell the merchandise. Fans were targeted with content based on their favorite player and shown jerseys they could buy specific to that player. Fans going to the game received messages about getting their Primetime Purple gear prior to game day.

A primary focus of this campaign was merchandise sales. In addition to a higher priced jersey, we designed a custom Primetime Purple long sleeve t-shirt, which we pushed to market a week after the initial launch of the campaign. In just 2 short weeks, the Primetime Purple long sleeve tee became one of the best selling items in our team stores all year.

Working with innovative team partner 3M - we extended the "Lights On" concept to each and every fan in the building. Purple 3M Translucent Film was made and distributed to fans so they could help us light up the stadium purple.

During the week of the game, the Vikings made custom Primetime Purple jerseys for several prominent members of the media – most notably the hosts of GMFB as well as the NFL Network Thursday Night Football broadcast team. Each jersey dawned the last names of the hosts, who then proudly displayed their jerseys and discussed the Primetime Purple look on air with positive reviews. The Vikings shared these videos and photos on their own social media accounts and two of the GMFB hosts shared photos of the jerseys on their Instagram stories.

A consistent brand look was executed across all social media channels throughout game day and leading up to the game.

Prior to kickoff, the Primetime Purple intro video was played to introduce the night's theme and set the tone for the game. The entire in game graphics package was updated for the Primetime Purple game, bringing the "Lights On" concept to life in the stadium. Videos were also created to run pre game and in game to get fans excited for the jerseys.

Ultimately, multiple departments were aligned and created a cohesive look across a variety of elements.

Overall, reaction to the #PrimetimePurple campaign was overwhelmingly positive and engagement was very strong.

Sales on the Primetime Purple jerseys and tee shirts were strong during and after the campaign. 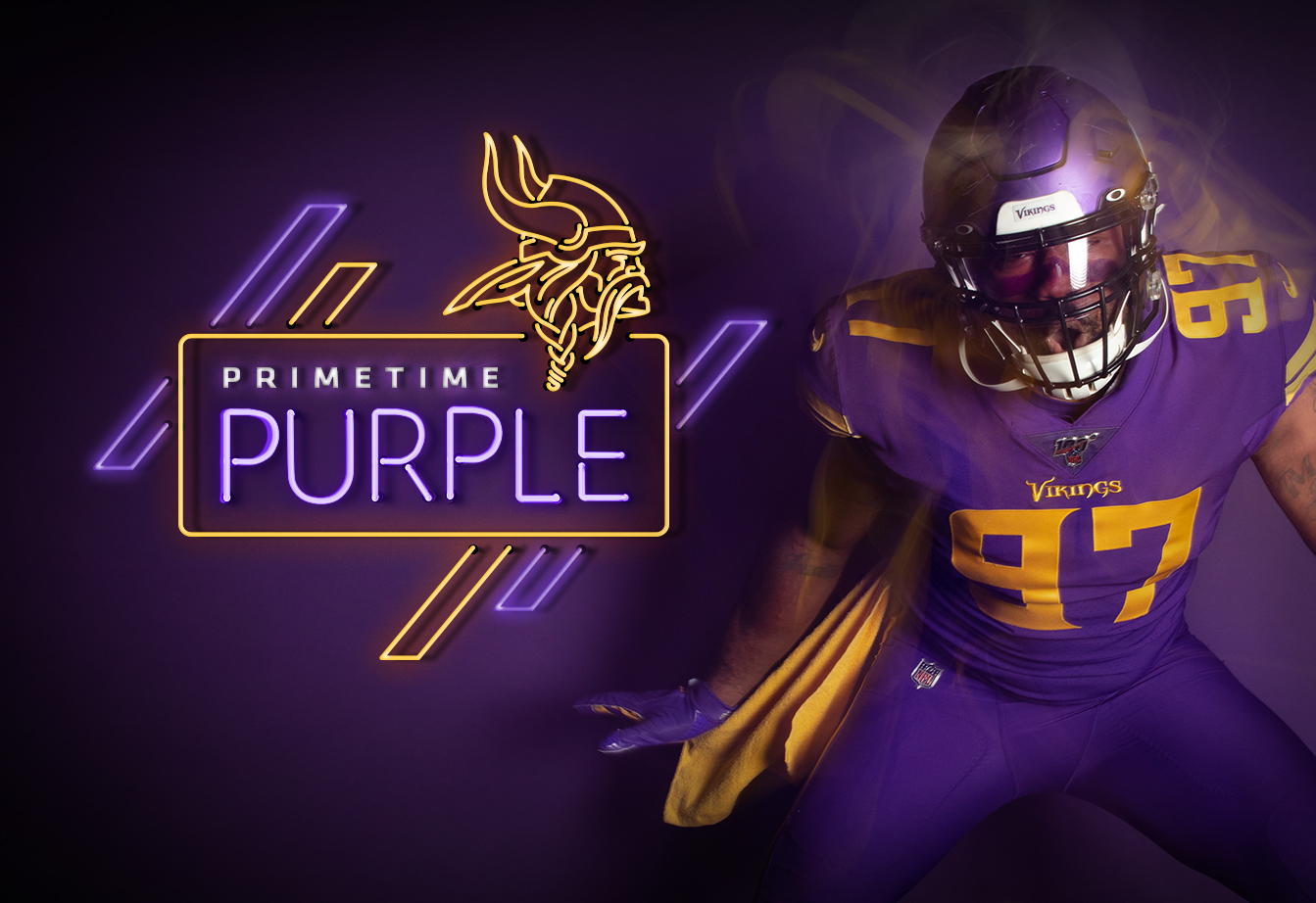 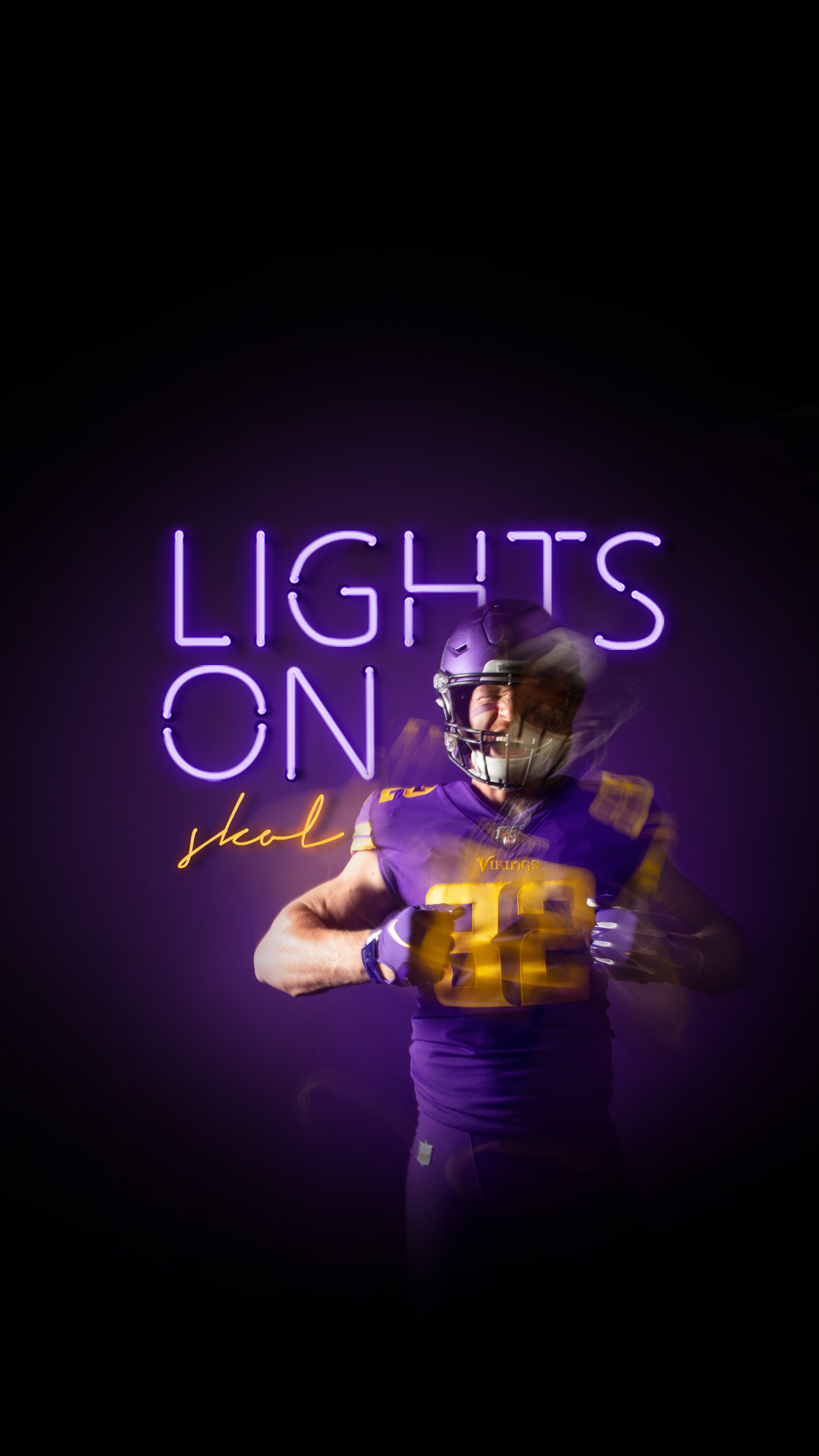 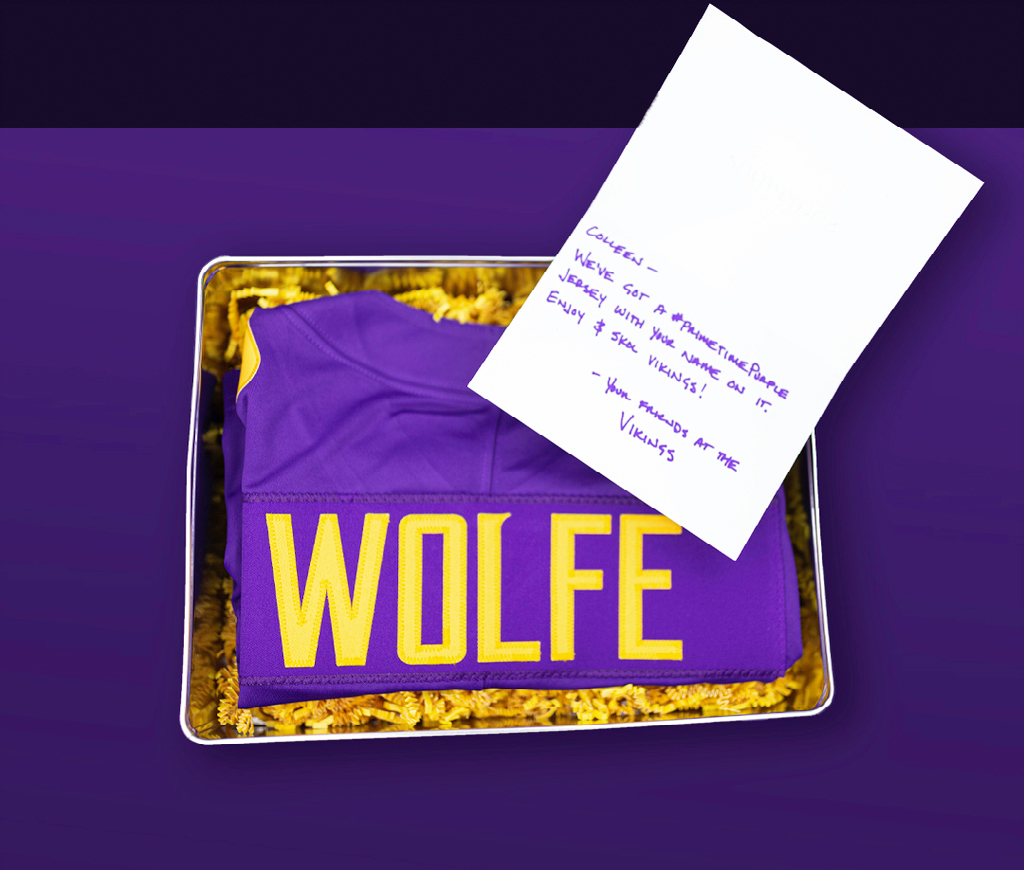 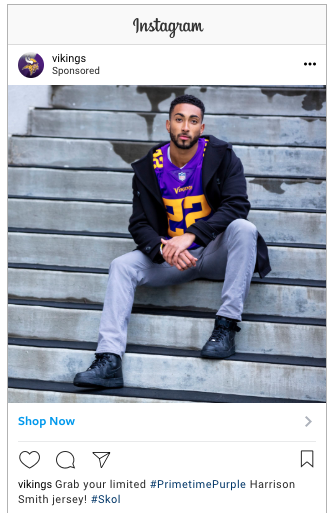 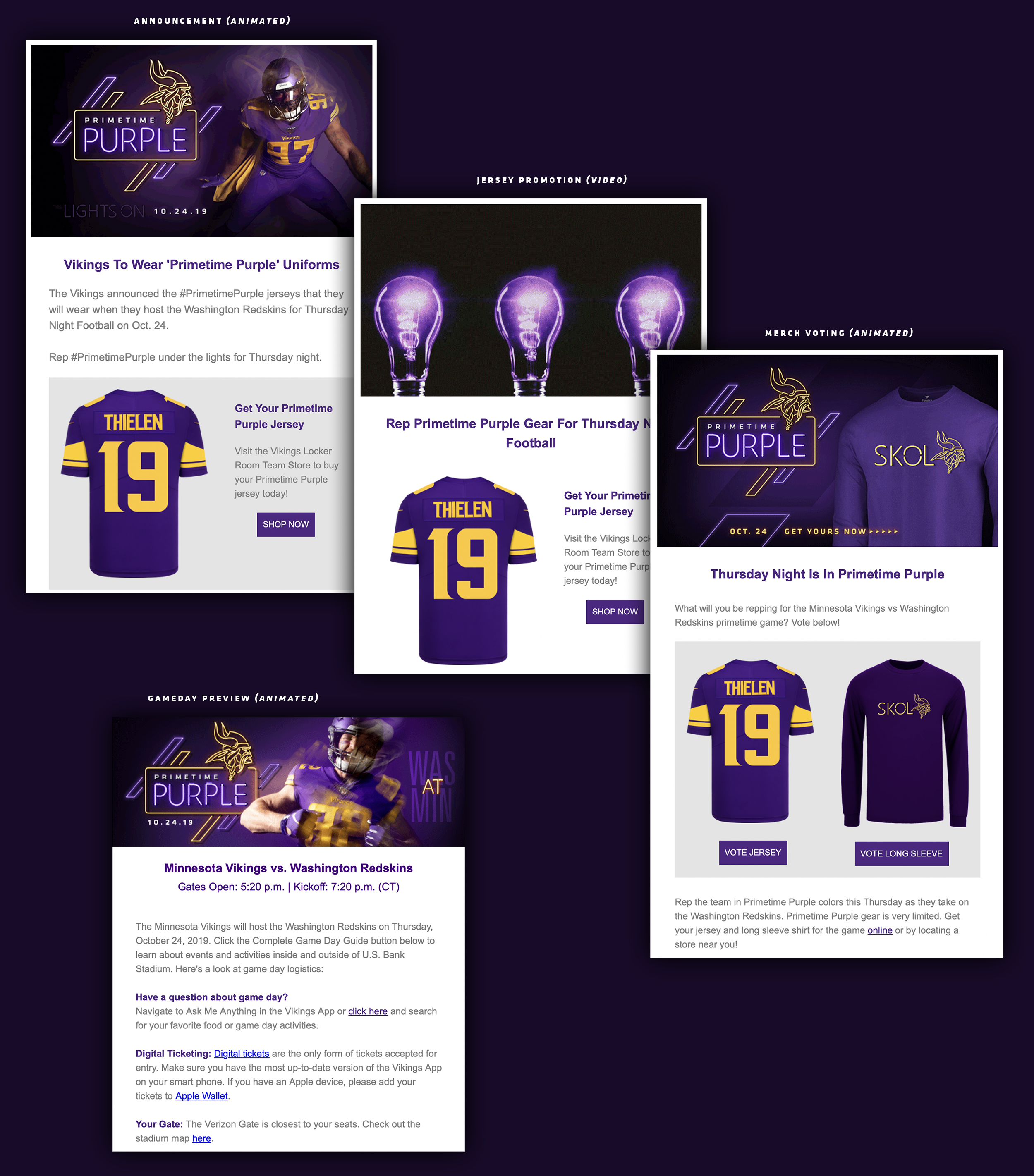 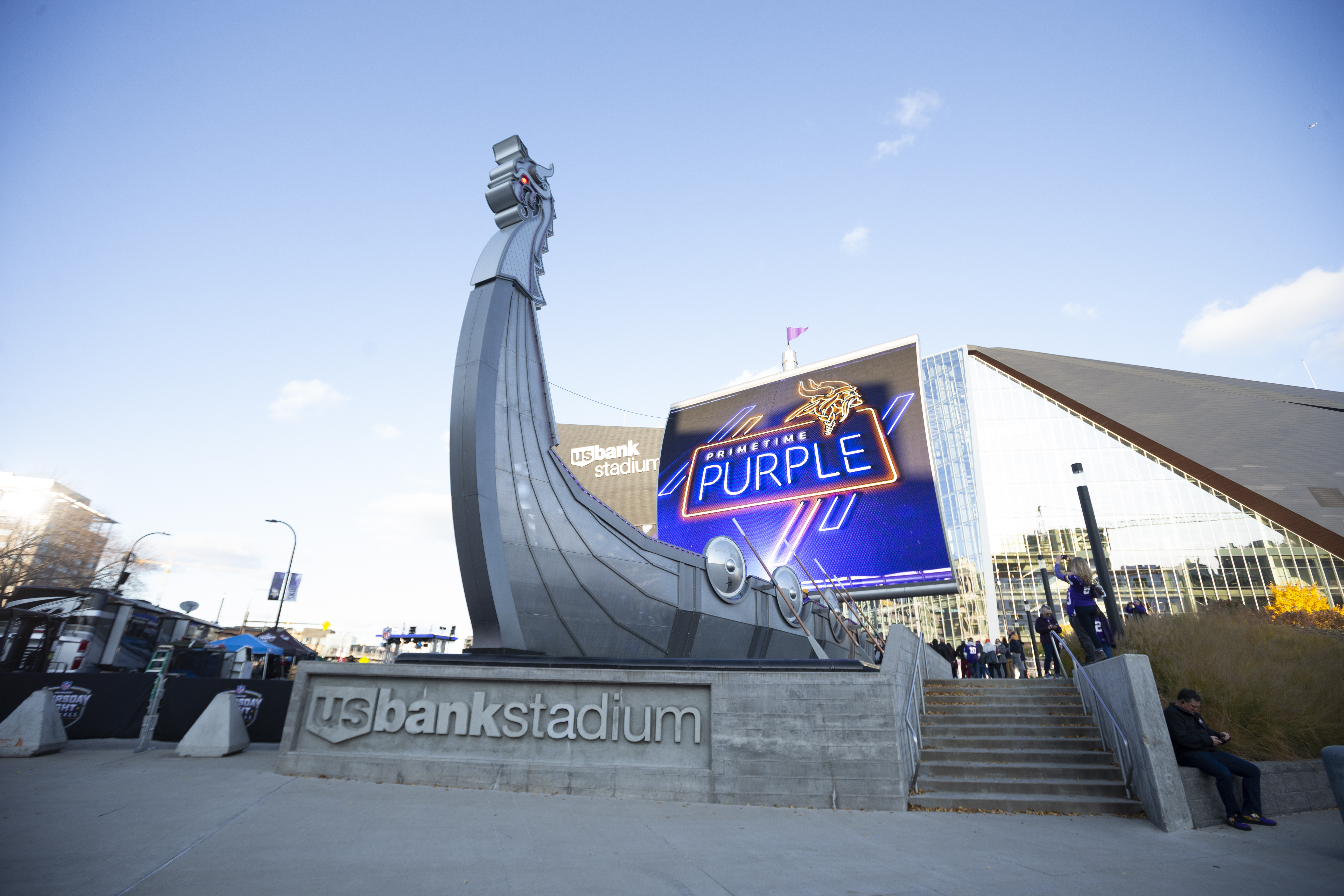 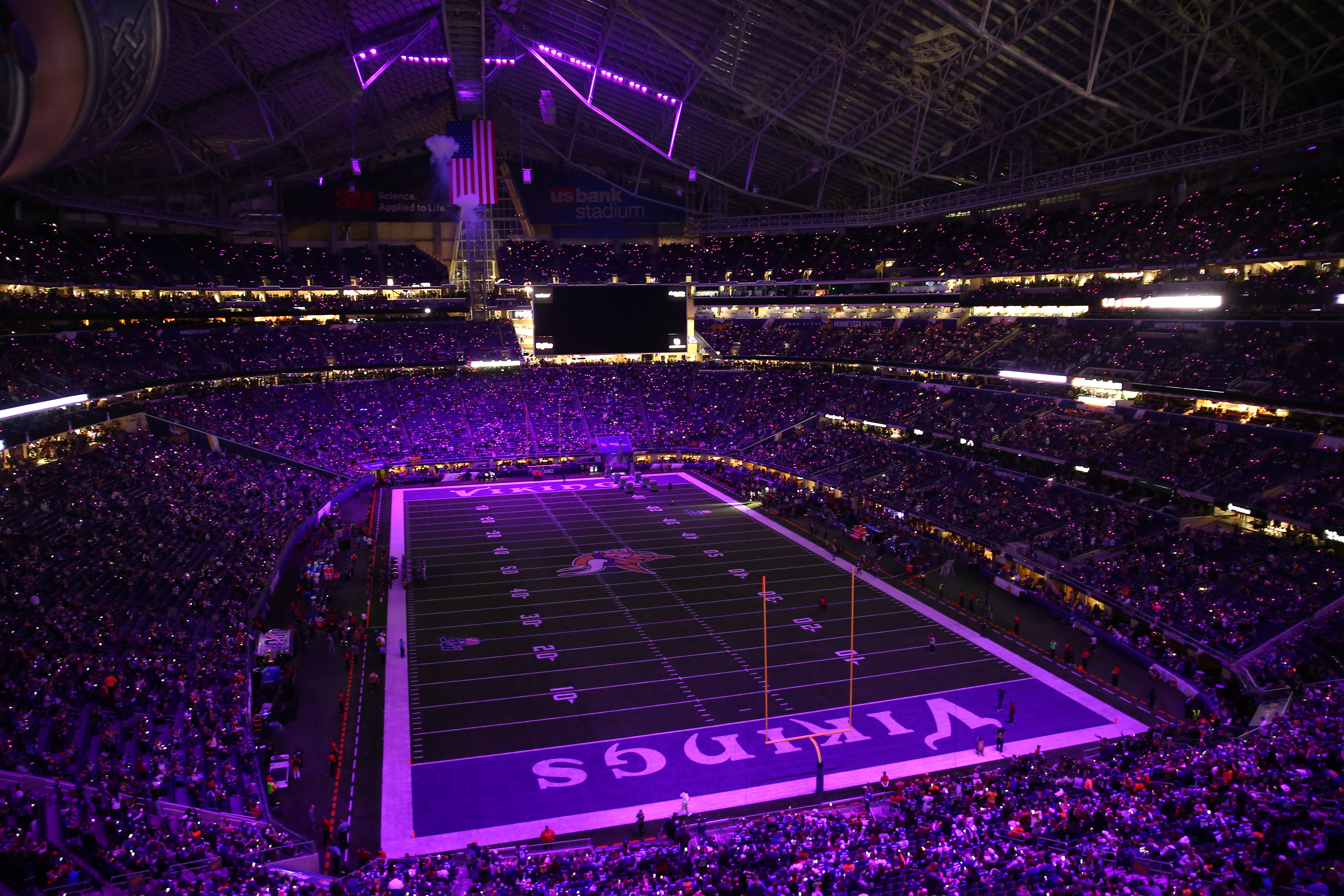