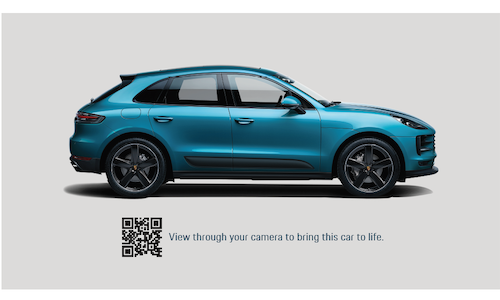 The Porsche Macan has become an established model with consistent sales but for the 2019 release we wanted to make sure we were able to cultivate new consumer groups to ensure future brand growth. We faced 2 challenges: people perceived the Macan as expensive and awareness was low. We needed to have breakthrough creative and GTM strategy to increase awareness by X%*.

Our target audience is technologically savvy and ranks high for caring about brands which are innovative and leverage technology. Knowing this, we wanted to take these audience passions and include in advertising in an engaging way.

We developed a Facebook Spark AR experience  activated by print and OOH pieces by way of Facebook. The experience leveraged OOH and print placements to unlock the 2019 Macan to drive around the user’s space in 3-dimensions which eventually blocked part of the billboard words to create shortened descriptors, for example FUNTIONAL to FUN.

Upon activation using the camera within the Facebook mobile apps, the static billboard came to life as an amazing animation reveal for users. Users heard the 2019 Macan’s engine revving, transforming into a beautiful, minimalistic stage, while the corresponding full-word typography appeared in the background. Suddenly, the Macan comes driving out right in front of the user, and after a couple of turns around the 3-D stage it slowly comes to a stop right in front of the full-word typography, blocking out part of it, transforming the word.

A challenge we faced is that most billboards sit above ground level, which would mean the 2019 Macan would be driving around in mid-air. As a result, this was solved for by introducing a slide-out 3-D stage space, which allowed the Macan to drive out of the billboard and around while still based in the reality of gravity. After the main animation sequence finished for the user, we offered them the option to customize the 2019 Macan in the AR experience by implementing a user-friendly set of UI controls for selecting official colors and wheel rims that Porsche offers for the new Macan. This customization UI was accessible directly from within the AR camera effect by the user. After creating their own perfect Macan, users then were able to restart the animation showing their version of the Macan in action, allowing them to share out their creation across Facebook and Instagram.

Additionally, as we know 55 percent of millennials have taken selfies and shared them via social media and 1,000 selfies are posted to Instagram every 10 second, we switched the camera around enabling the selfie feature with the Facebook Spark AR experience to increase shareability. As a result, users can take a selfie (photo or video) of them sitting behind the wheel of the new Porsche 2019 Macan that they just customized with their color and wheel selections. Ready to share with their friends!

After securing premium positioning across a set of top print publishers, we brought the Macan AR experience to life with more than 10.5K interactions. June-August placements had 3.2MM estimated impressions across Outside, Traveler, Travel + Leisure and Wired publications.

Based on Milliward Brown results, we saw strong lifts across Macan awareness and online ad awareness signifying strong messaging association (6% and 9% increases). While our objective of increasing awareness of the Macan was achieved, increased awareness of Porsche indicates the Macan had a halo effect for the brand (X%*). There was a 19% online ad awareness lift and X%* of people said Porsche makes cars that are fun to drive after seeing the creative. 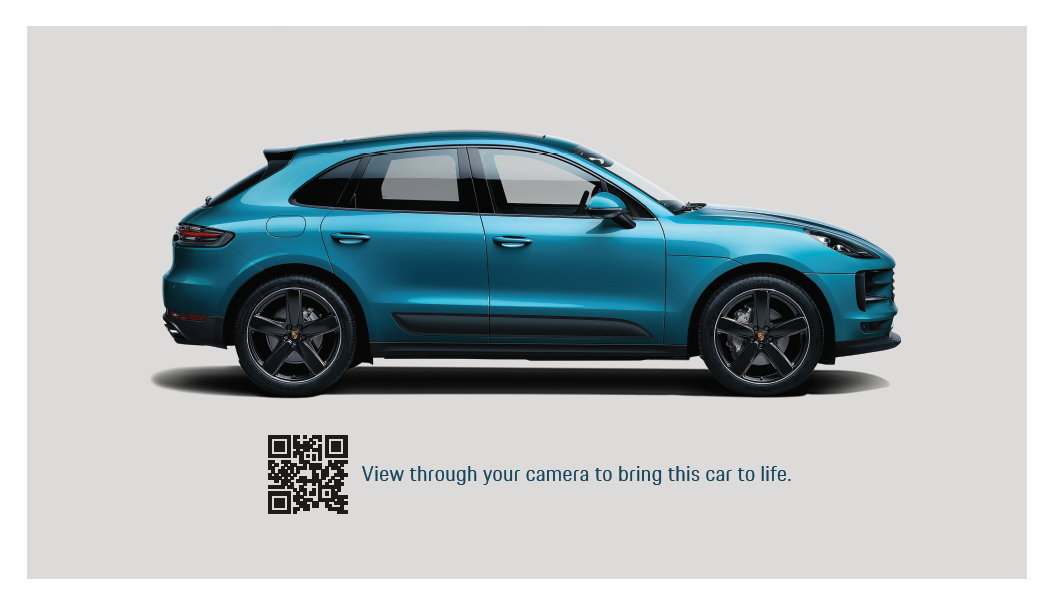