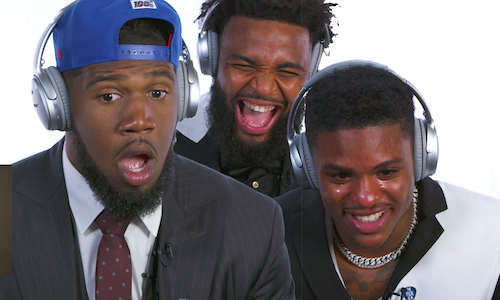 As one of the rare “helmets-off” events on the league calendar, the NFL Draft is a crucial opportunity to introduce football fans to the next generation of stars and showcase their personalities in a genuine way.

And they’d have their script down to a T – generalities like, say, “I’ve always dreamed of this” or “My dad has had a big impact on my life.” What they’re saying may be true, but we’re not hearing it in an authentic fashion that drives emotion and creates a lasting impression. There was a content gap we needed to solve.

We wanted to introduce the players in a helmets-off setting, help build connections between them and their new fan bases by highlighting their relatability, and most importantly, cut through the noise and create a lasting impression by getting players to reflect authentically on the moment and on their journey to that point.

“NFL Draft Letters,” a video series in which we surprised prospects with letters or video messages from loved ones, just moments after the biggest event of their lives.

Leading up to Draft, the NFL Social Lab began identifying key storylines for each prospect that would be in attendance. These allowed us to begin identifying people in their lives that could best speak to their experience and journey, and could contextualize the impact of Draft night on their lives. The NFL's Player Social team began the outreach process, and began coordinating the best time for them to either deliver the letter or record the video during Draft week in Nashville.

After prospects are drafted, they are immediately rushed through a “media car wash” – essentially, a whirlwind of radio interviews, news reporters and TV hits. The NFL Social Lab has a footprint there, where we sat the prospects down to show them their message and film their reactions. We kept our space small and intimate, with a limited crew and one-camera setup. We knew these messages were impactful and emotional, and we wanted to make sure prospects could feel comfortable getting vulnerable without too many eyes watching. Knowing the content would speak for itself, we also kept the backdrop and lighting simple to avoid distracting from the player reactions in such a special “helmet-off” moment. Once the player arrived in our space, we sat him down and told him we had a surprise. Then we let their loved ones do the talking.

The reactions were exactly what we had hoped. Prospects were so surprised and touched by the messages that we got the authentic responses we envisioned, resulting in the most engaging content of the entire NFL Draft.

We felt that for fans to feel the emotion and become invested each player’s story, we needed to let each reaction live on its own. So rather than putting out a long-form feature or compilation of all the reactions, we produced the content as a video series, one video per prospect. Keeping the content raw with minimal editing allowed the viewer to go on these journeys alongside the prospects, almost feeling as if you are in the room with them.

Traditionally, social content performs best when short and fast-paced, but by reducing the editing and leaning into the incredibly compelling raw content, we knew we could push the status quo of social video. The unique visual of the simple set allowed the videos to stand out in-feed, stopping scrolling thumbs in their tracks and imploring fans to dive into the emotional storytelling content they crave.

We also took advantage of the incredibly powerful NFL social ecosystem, meaning these videos were posted from prospects’ college social accounts, their new teams’ accounts, the NFL’s account and their own account if they desired. This ensured that no matter what investment a fan might have in a player – whether a fan of his college, a fan of his new team or just a fan of football – this content would be served up to them.

When looking to the numbers, NFL Draft Letters was an extremely successful video portion of the Draft campaign.

But more importantly, Draft Letters was successful in terms of delivering the sentiment we were aiming for (see images below). New fans were commenting stating how excited these videos made them about their new addition ("This is incredible! I already LOVE this player and his family! Welcome to Steeler Nation!"), while it even persuaded those from other fan bases to become fans (Devout Ravens fan sendign this tweet, but this is amazing and what it is all about. I will cheer for [Devin Bush] and his family for 14 of the 16 games the Steelers play each NFL season after watching this touching moment with his family). Most importantly, fans loved seeing this side of the prospects, and showing what the NFL Draft is all about (This is what draft is all about. Dreams turned into a reality. Emotion of absolute pure joy). 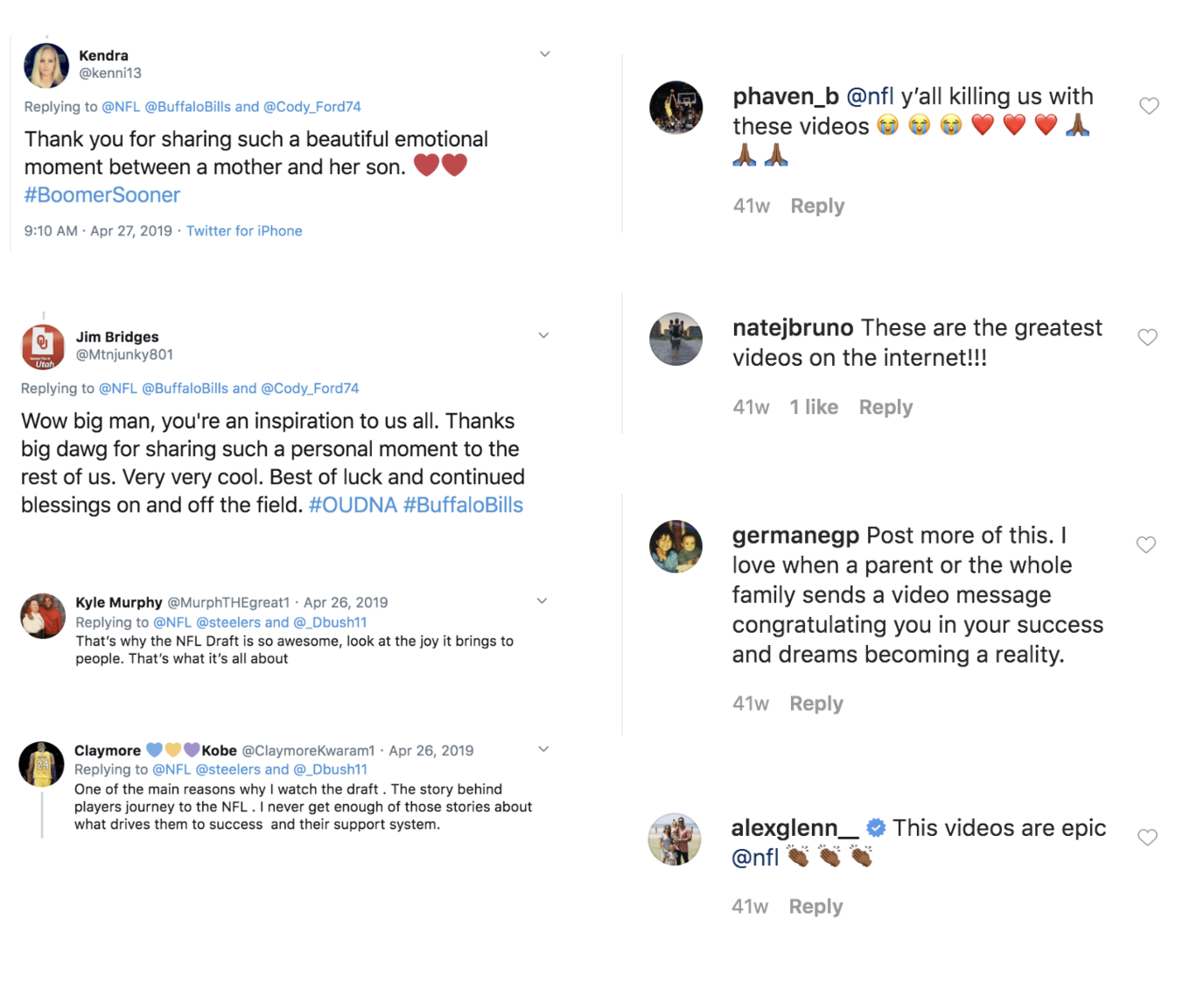 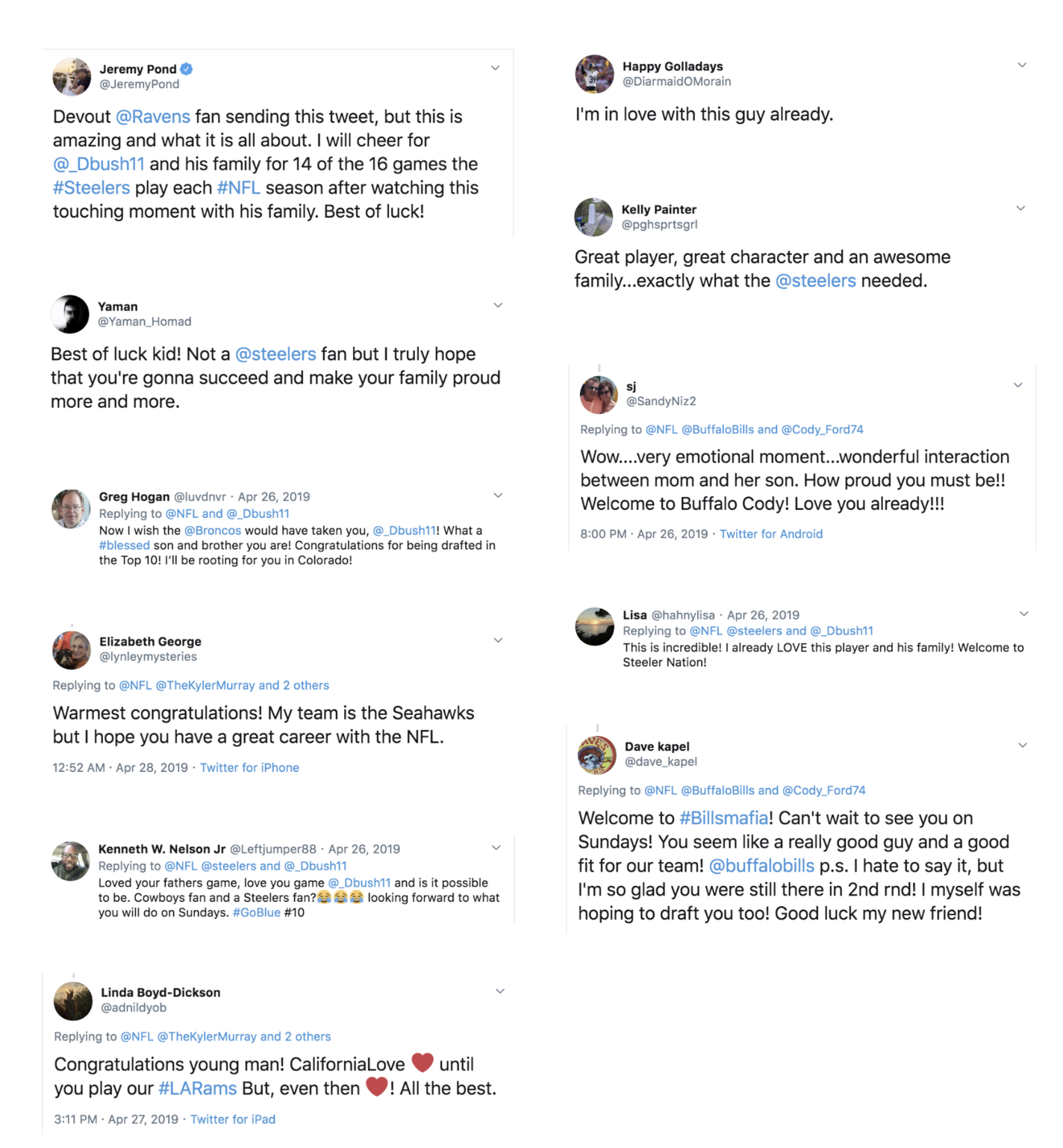 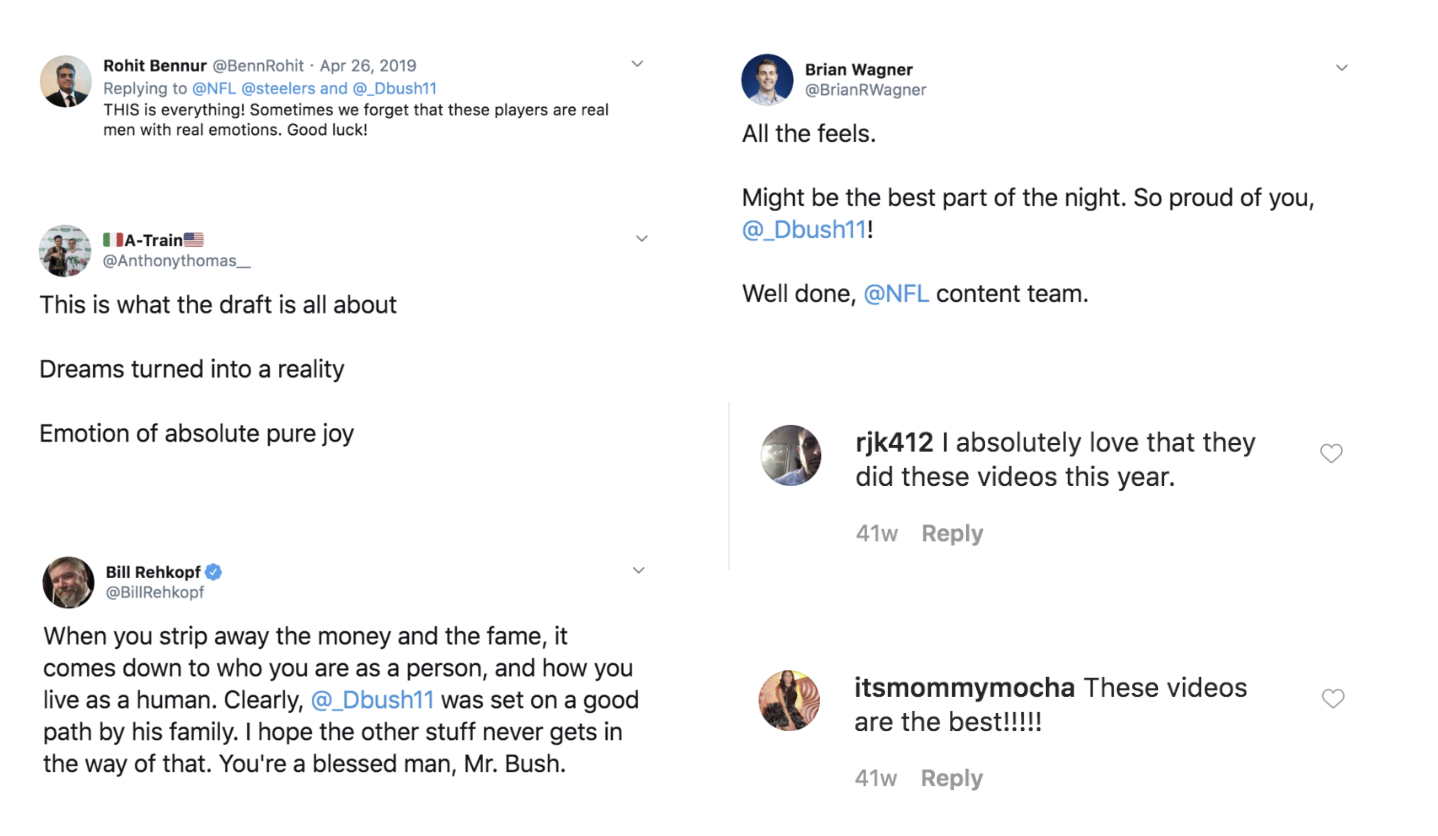 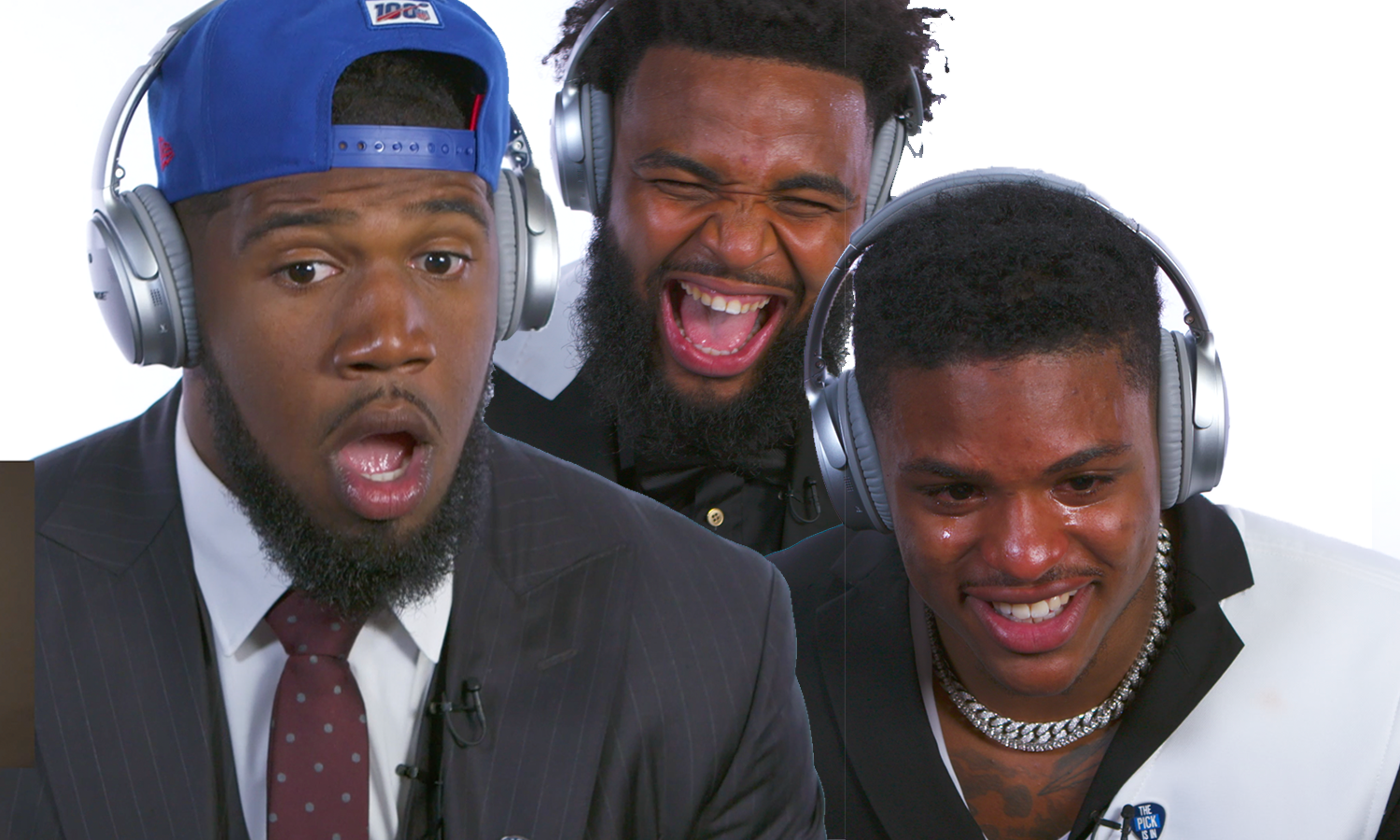 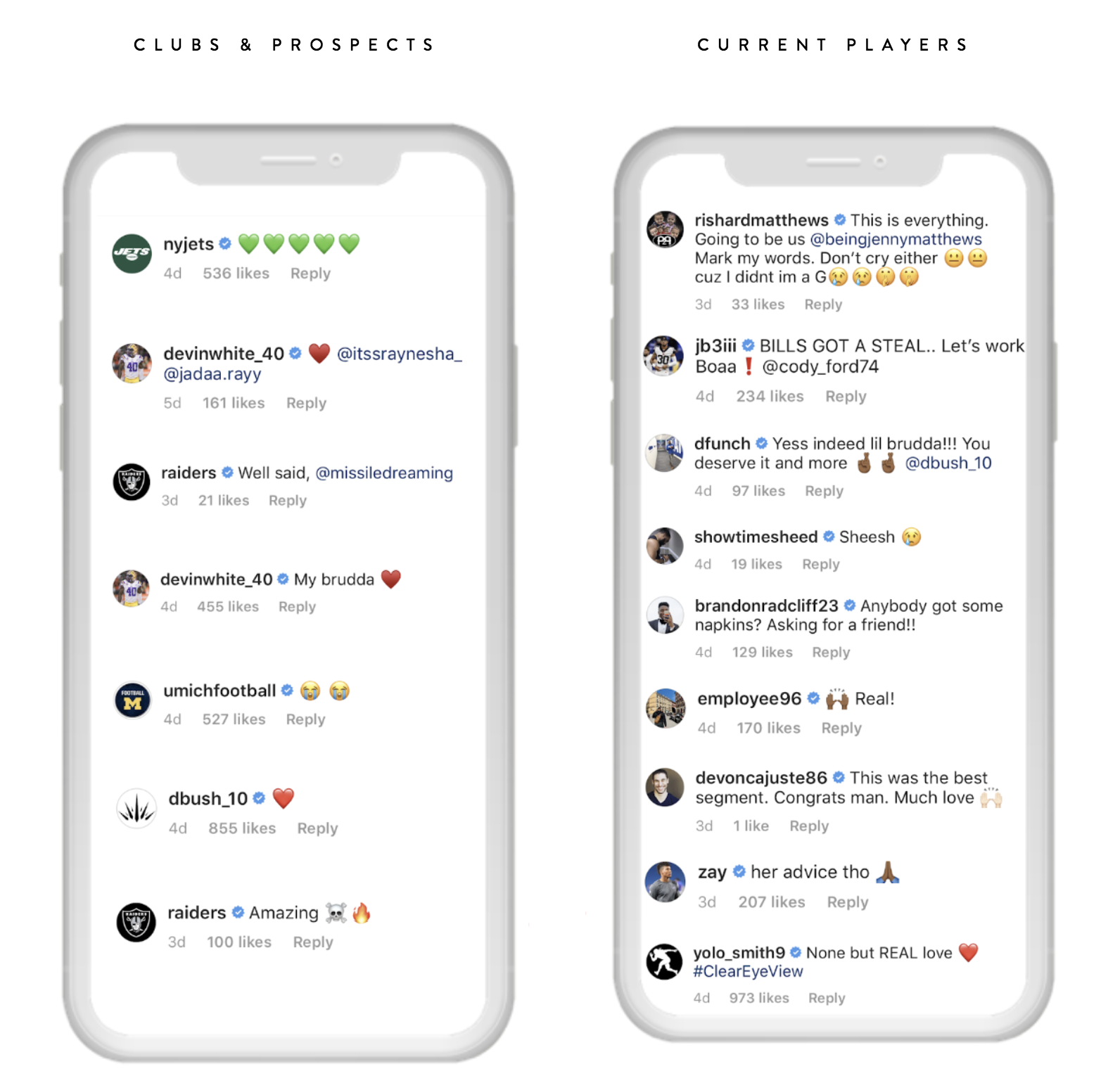 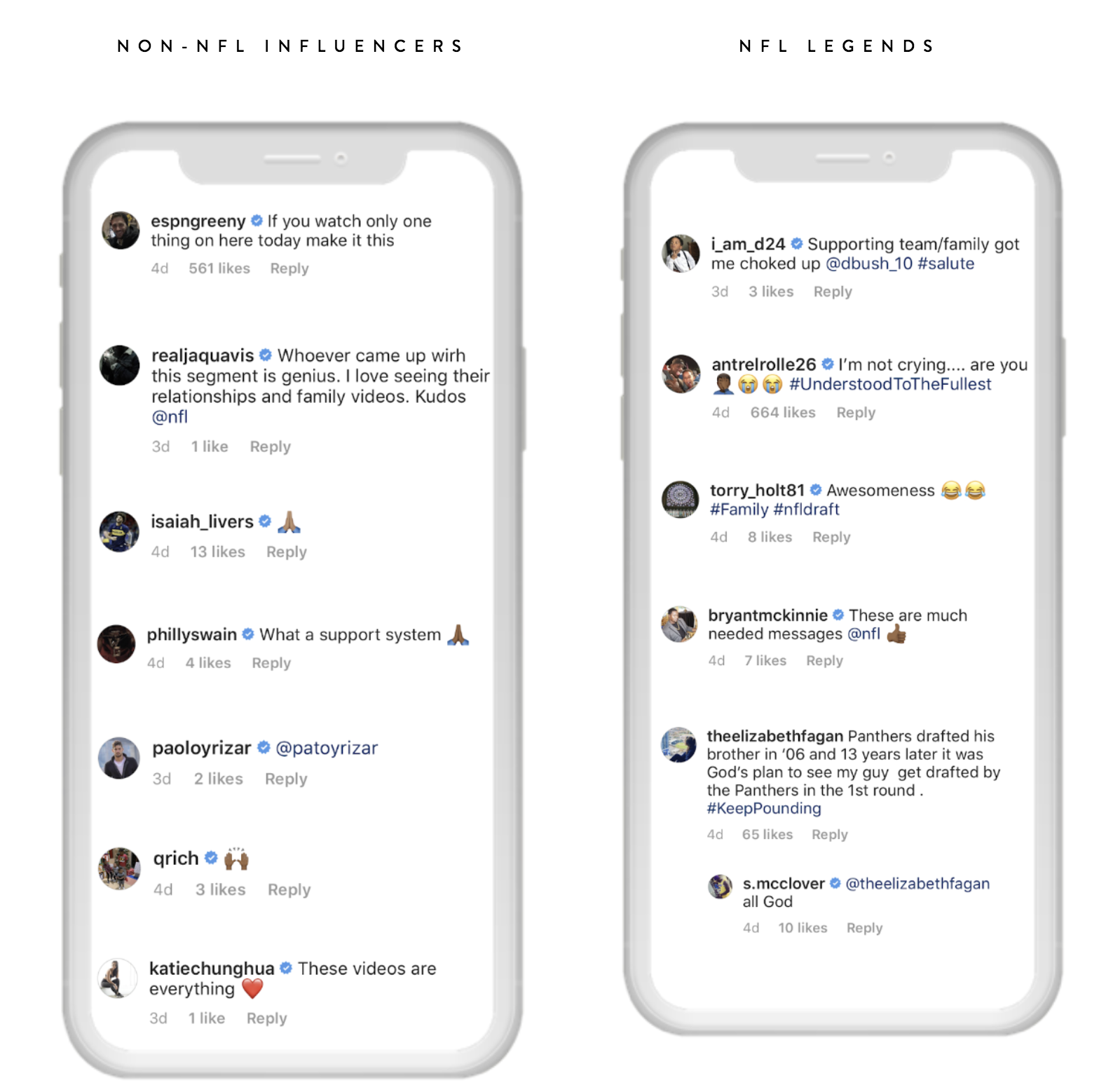 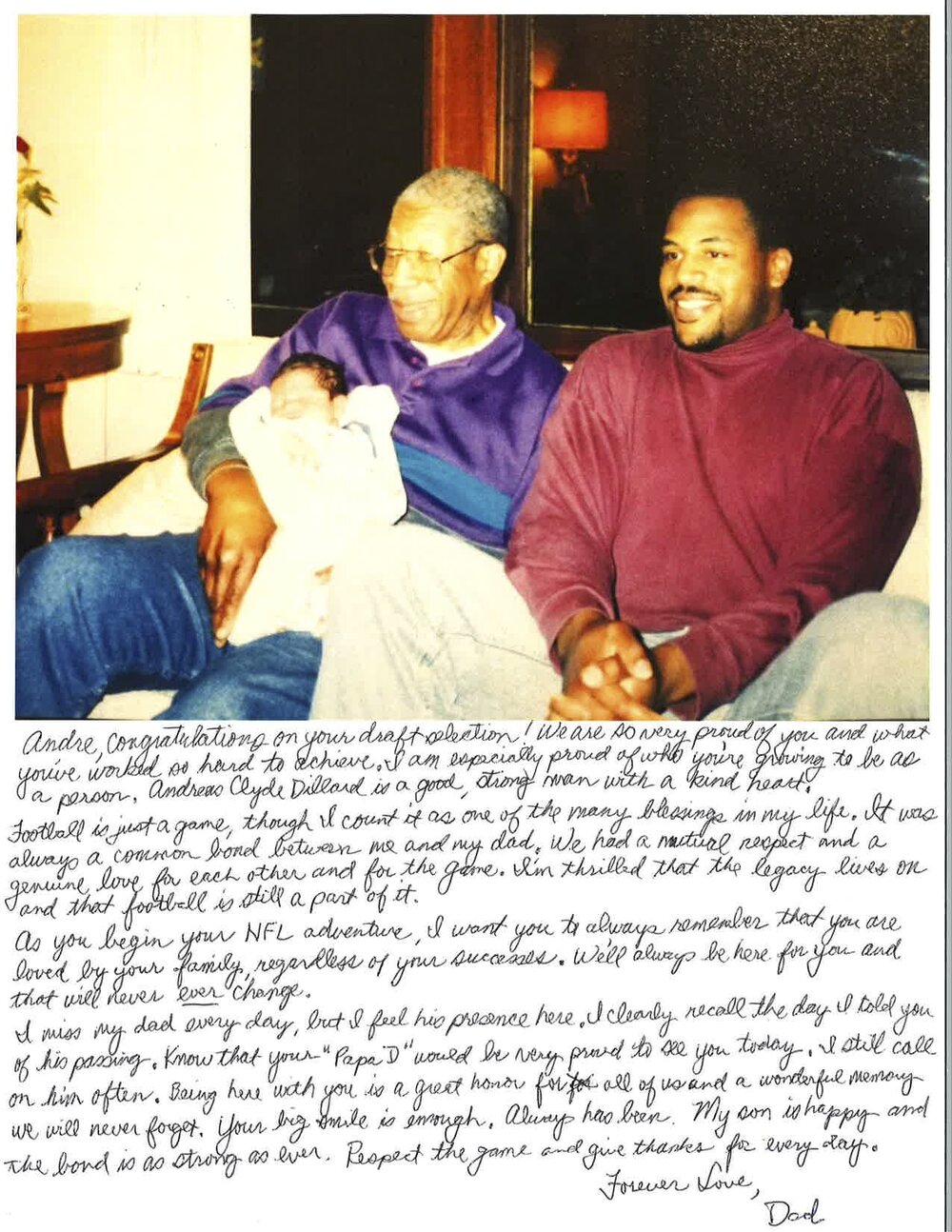 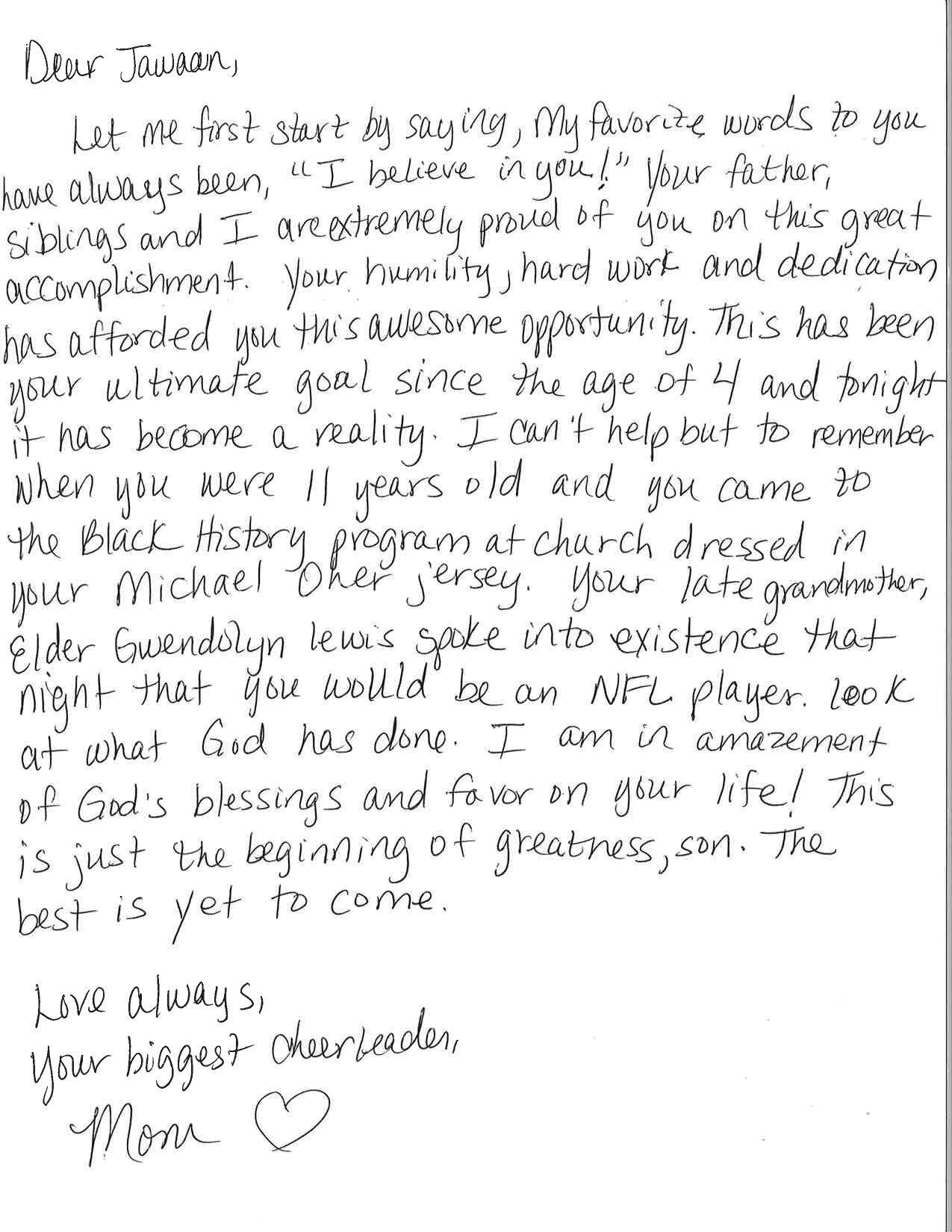