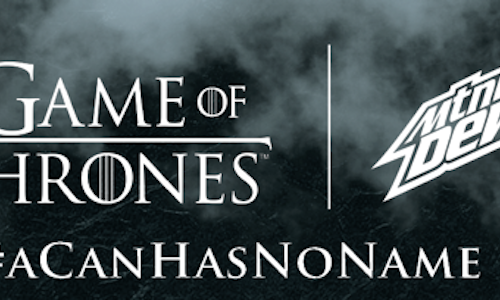 MOUNTAIN DEW & Game of Thrones: “A Can Has No Name”

MOUNTAIN DEW is a brand with high awareness, although it has lost grasp of the rebellious cultural cachet it had enjoyed in prior decades. A crowded consumer market, changing consumption habits and a plethora of competitive options made connecting with brand advocates harder than ever.

Our challenge was to re-engage not only our biggest fans (affectionately known as DEW Nation) and get them to rally behind the brand once again, but to also fuel active brand conversation at a time when soft drink sales and cultural relevance were challenged.

After a 2-year hiatus, Game of Thrones was finally returning in April 2019 and the hashtag #ForTheThrone was beginning to trend. The pop culture landscape was heating up with Thrones-related content and products.  Thrones fans were not just passionate but thirsty for content – its Season 8 trailer shattered HBO records, racking up 81 million views in the first 24 hours.

That made any Thrones-related campaign a double-edged sword: it was a cultural conversation brands wanted to be a part of, but amassing awareness and fan engagement amidst the noise would be difficult. MOUNTAIN DEW had to find a way to make its unique Thrones campaign stand out among the many others tied to such a monumental cultural event.

We knew from our research that many of our most passionate loyalists were also huge Game of Thrones fans and had drawn connections between the brand and the show long before the Season 8 trailer dropped. By digging into social conversation, we discovered chatter around DEW and Wildfire (a powerful substance from the show) being the same color, fan theories regarding Peter Dinklage’s (widely known as Tyrion Lannister) appearance in the 2018 DEW Super Bowl ad, even a replica of the Iron Throne forged of DEW bottles – a foreshadowing of a partnership that seemed written in the stars.

When HBO asked MOUNTAIN DEW what it was willing to sacrifice in partnership for the final season of Game of Thrones, the brand embraced the challenge #ForTheThrone. We knew that to stand out amidst the rampant cultural conversation surrounding the show, we needed to execute a campaign that would excite both DEW Nation and Throners alike.

The idea that central characters of the show sacrificed everything they loved #ForTheThrone, inspired us to do the same. We were drawn to the rebellious character of Arya Stark, known in the series as “A Girl Has No Name,” who gave up her identity to become no one.

MOUNTAIN DEW would sacrifice its full arsenal including its iconic green color, design, social channels, media and talent partnerships.  Following in Arya’s footsteps, DEW would also give up its identity to become no one, transforming itself into “A Can Has No Name”.

To re-establish the brand’s cultural relevance, we crafted a step by step approach:

To seed the campaign, we released a teaser across DEW and Game of Thrones’ social channels that featured DEW athlete and NBA All-Star, Joel Embiid, drinking DEW on the Iron Throne.

The next day, DEW made its first sacrifice #ForTheThrone: surrendering its social pages to an icy frost and archiving over 600 Instagram posts[1]. To demonstrate our commitment #ForTheThrone, we sacrificed our iconic green “face” to reveal “A Can Has No Name”. When warm, the cans appeared brandless but when chilled, they revealed Arya’s Stark’s kill list. Further fueling the frenzy, MOUNTAIN DEW took to the streets and planted Iron Vending Machines in NY and LA, which could only be unlocked by following the clues on social. We also encouraged fans on social to tell us what they would sacrifice for “A Can Has No Name” and rewarded our most ardent fans with one of the highly-limited cans.

At the same time, we launched a music video reinterpretation of the Game of Thrones theme song on social, featuring our DEW Nation talent and inserting our name (“DEW”) into the melody. We even inspired late-night royalty, Jimmy Kimmel, to create his own version during an in-show integration.

DEW dominated conversations through its efforts:

DEW sparked demand and frenzy for “A Can Has No Name”:

The DEW and Game of Thrones partnership was in fact written in the stars:

overall strategy fully embraced (our) final season marketing campaign. We were inspired by their act of devotion and are excited to collaborate on a limited-edition product that connects to one of our show’s most popular storylines.”

And that’s how we re-established DEW cultural relevance #ForTheThrone.

Video for MOUNTAIN DEW & Game of Thrones: “A Can Has No Name”