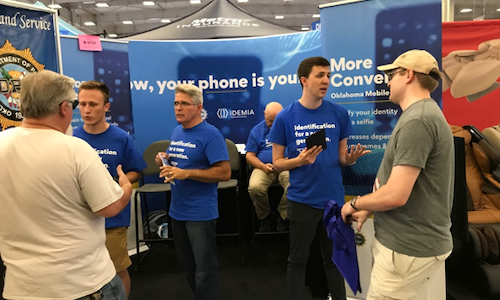 Mobile ID: Creating the Digital Transformation for Your Driver’s License

The state of Oklahoma became one of first states in the nation to begin implementing a mobile driver’s license. The promotion of mobile ID technology culminated during one of the largest state events of the year - the Oklahoma State Fair. The 10-day promotion at the fair served as a key opportunity to showcase and promote Oklahoma’s leadership in completing the digital transformation of the most personal information that we carry.

The state fair promotion was to highlight the many different benefits of Mobile ID technology, giving Oklahomans a hands-on experience while encouraging the promotion of the technology online. While at the state fair, Oklahomans had the opportunity to sign up and participate in the first test program of the mobile driver’s license application on their smartphone.

Important to our goals was not only highlighting the convenience and utility of the application, but the security and stability that comes with mobile ID.

Partnering with major stakeholders – including law enforcement, elected officials, food and beverage, and more – was critical to encouraging Oklahomans that the mobile ID was ready for real world use, and the next step was to take the technology into their own hands and control.

Importantly, combining a strong digital and social media presence alongside the traditional on-the-ground efforts was an important piece of telling the story of mobile ID, and showing how it is the best piece of technology for Oklahomans to utilize for protecting their personal information in a digital world.

Ahead of the official launch of the Oklahoma State Mobile ID program, the Oklahoma State Fair marked the perfect location to test and display the most substantial development of ID technology to date. Importantly, the success of Mobile ID’s test promotion involved several key stakeholders showcasing real world usage as well as security, convenience, and reliability displayed both in person and online.

The trial launch of Mobile ID was an integrated campaign, build on the physical security and tradition of having your ID in your wallet combined with the digital transformation that showcased the power of technology on your smartphone. The teams worked alongside the team on the ground to highlight success stories and anecdotes, and transferred that message to a expand digital audience – that was likely viewing mobile ID on their own smartphone.

To ensure promotion was strong across departments, we worked alongside several key departments that played a role in the app’s success, including the Oklahoma Department of Public Safety, Innovate Oklahoma, Oklahoma Office of Management and Enterprise Services, and the Oklahoma Highway Patrol. The team coordinated a social media campaign over the course of 10 days that emphasized specifics areas of safety, convenience, and innovation rolled into one message that shined a light on just how exciting and easy to use mobile ID can be to the user.

The awareness campaign represented a unique collaboration of state government working together with cutting edge technology. Oklahoma was taking a substantial leap forward that nearly every other state had yet to take.

To garner additional attention beyond the state fair participants and the Oklahomans following online, a video series was developed to further tell the story of how mobile ID is the way of the future and is here for Oklahomans to control their identify in a digital space.

While mobile ID technology is an exciting concept, it was critical for the campaign to ensure real world testimonials were captured as the first users started using the app. Oklahomans like the idea of using their smartphone for every task, but telling a story on how your driver’s license is actually easier, more adaptable, and safer, had to be heard from Oklahomans using the experience themselves.

The video series would highlight how mobile ID acted in the very same way as your physical driver’s license. Your phone displays exactly the same license – except now, it’s backed up by state-of-the-art security and you are in control of your own information. During both the hands-on experience and video series, examples were shown of mobile ID’s benefits– instead of having all of your personal information shown to everyone on your physical license, you can pick and choose what you’d like to share. Have you changed your information? Instead of needing to travel somewhere, you can make the change on your smartphone just like you would with other applications.

In summary, the campaign’s partnership of real-world application alongside online support was the dual effort needed to embrace the technology of the future.

The promotion of mobile ID in Oklahoma was a unique success story, formed in the tactics it used to bridge the gap between the physical world and digital world. Oklahomans were able to witness the technology’s benefits happening online, but could find a hands-on experience as well.

The message of mobile ID saw success on both fronts, and centered on education and ease of use. Mobile ID has additional benefits that are not available with a physical ID, but each user is able to discover them on their own smartphone.

A multiple of photos were shared across social media platforms by state agencies and elected officials, who also contributed to the video series. Several thousand Oklahomans were exposed to mobile ID’s trial campaign in person and online, and the effort garnered attention in the form of several local news stories. The video series was finalized and prepared for future promotions, to help prepare the state and involved stakeholders to showcase the future of mobile ID.

This successful campaign approach falls in line with how mobile ID impacts how we use identification in our daily lives - it fundamentally changes everything, yet we are already familiar with how to use it. 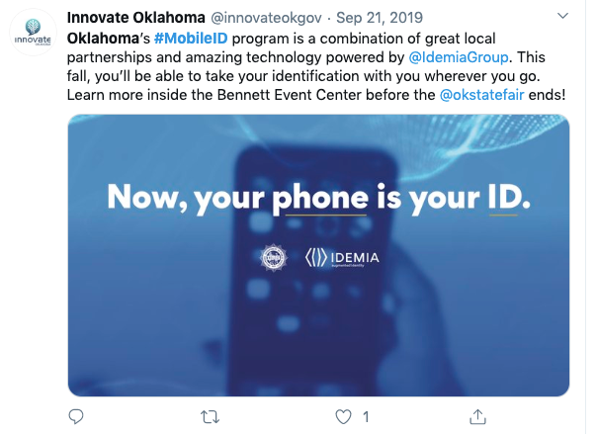 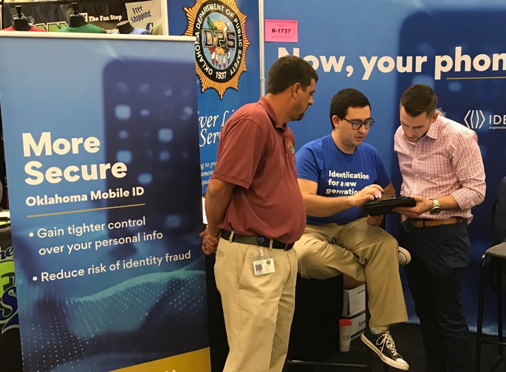 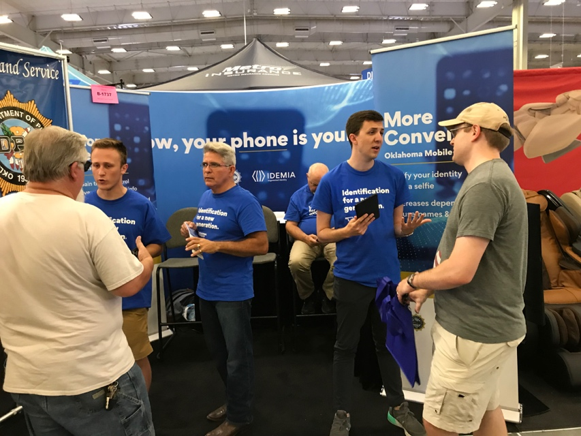 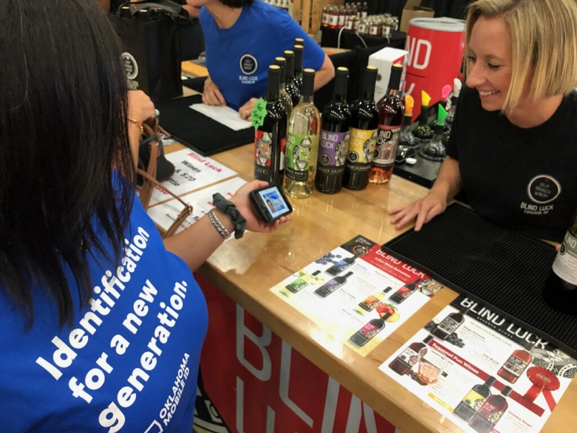 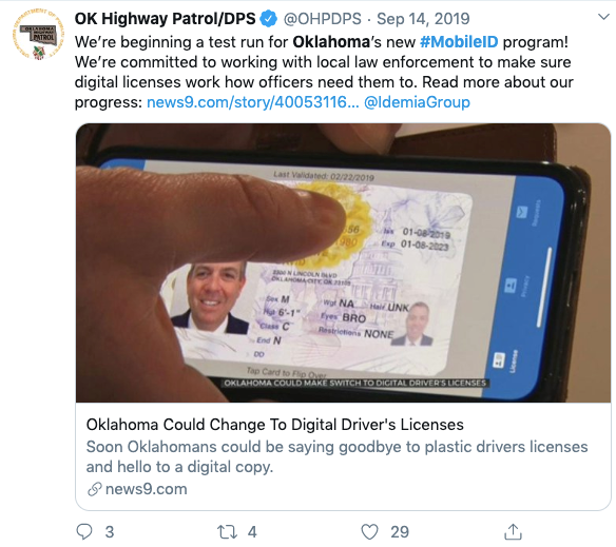 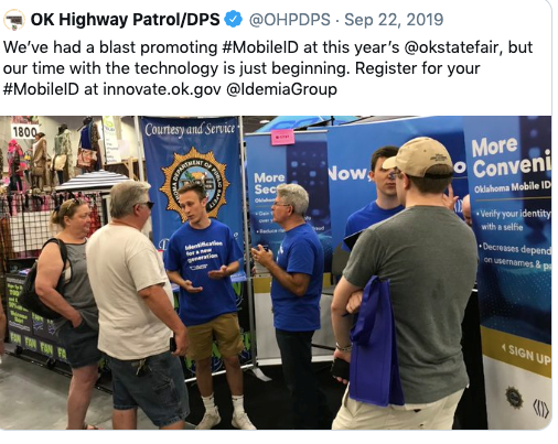 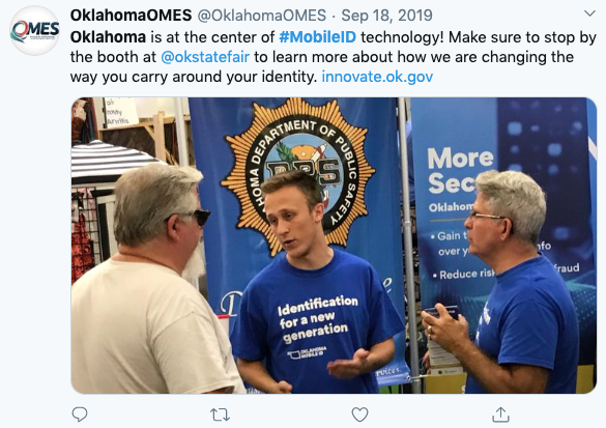