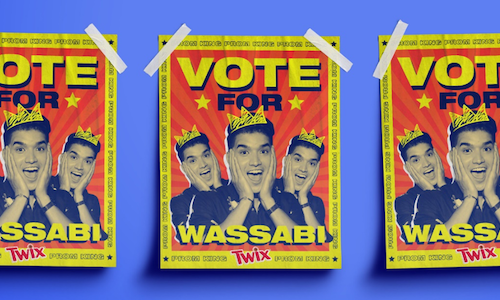 In the growing candy ecosystem, Mars looks to stand out amongst its competitors through its impressive portfolio of candy and chocolate by reinforcing brand loyalty and purchase consideration with a new generation of young consumers. This new generation is driven by social-first initiatives and resonates with story-driven content that is meaningful to them. There is no better place for young people to feel connected in this social-first realm than at VidCon. Thousands flock to VidCon year after year where the multi-day event grants fans the ability to get up close and personal with their favorite social content creators which serves as the perfect backdrop for Mars’ co-branded partnership with MTV.

For this year’s program, the goal was to draw in these active young fans by creating an engaging storyline with a prominent social influencer experiencing Mars’ vibrant, candy-filled activations throughout the VidCon footprint. By leveraging MTV’s strong social presence with Gen Z, platform-specific content was created and distributed across MTV’s social handles throughout the week of VidCon to amplify Mars’ on-the-ground presence and allow fans everywhere to share in the experience.

Viacom Velocity utilized the cultural impact of VidCon to bring to life the youthful and playful brand attributes of Mars. Their largest activation, Mouthwatering Maze, included Instagram-worthy rooms featuring brands like Snickers, Skittles, Starbursts, 5 Gum, M&M’s, and TWIX. In addition to the Mouthwatering Maze, the TWIX Prom was a highly anticipated event at VidCon where festival-goers could come together and celebrate the end of their VidCon experience. Jointly, the Mars’ VidCon activations worked in tandem to create a sweet backdrop for our candy-filled adventure while naturally weaving in the various brands throughout the custom video content.

Together, MTV and Mars partnered with fan-favorite content creator, Alex Wassabi, to take fans on his journey to become Prom King through a two episodic video series shot throughout Mars’ ubiquitous footprint. As one of the most notable, relevant influencers at VidCon, Alex Wassabi’s participation in the campaign allowed the brand to establish a strong connection with Gen Z.

Overall, the TWIX Prom served as the creative anchor of our storytelling, allowing for candy and chocolate to truly shine. From highlighting a throne made of Snickers to making a pit stop at the TWIX Prom coffee station, Mars naturally came to the forefront throughout the series and fans were immersed in the fun of VidCon from their screens at-home.

From there, MTV strategically rolled out platform-specific content throughout the week and the week following VidCon. The strategic distribution of content on MTV’s platforms allowed for the content to maintain relevant for those who did not attend the convention and were steadily checking social for live updates and content. The behind-the-scenes look gave fans an in-depth view of the VidCon experience, while maintaining a strong focus on the Mars activations and creative storyline.

While Alex Wassabi campaigning for Prom King served as the creative crux of our program, the content gave fans both on-the-ground and at-home a fun creative narrative that showcased and amplified Mars’ grand presence at VidCon. The overall VidCon program drew in much success for Mars and as a result, delivered the following:

By distributing VidCon content across linear, digital and social from MTV and talent’s handles, Mars utilized all touch points to reach our socially-driven fans