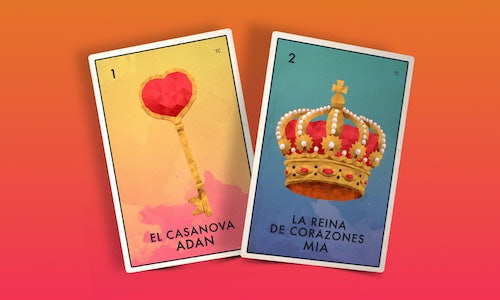 Todos Caen translates to “everyone falls,” referring of course to everyone falling in love. Our goal for the campaign, then, was to get everyone to fall in love with the film. And, because modern romantic comedies tend to follow familiar beats, we needed to separate it from the rom-coms that came before it to build passion among the fanbase who were eager for something fresh and exciting. Martha Higareda and Omar Chaparro have a pretty deep chemistry and that meant that fans knew what to expect from them, but were worried that the duo was getting stale. We wanted to dispel this notion by pitting the two together in an all-out romantic war. Love was truly a battlefield.

Because the film boasts so much confidence and sexiness, we needed the social strategy to feel the same way. Our two primary audiences were fans of romantic comedies and younger couples, which meant almost everything we created was focused on Facebook and Instagram. Using a voice that emulates fans’ best friend, we handed out romantic (and friendship) advice left and right, encouraging fans to make a date out of it and get ready for a good time. In tune with the film, we fostered interaction with users and encouraged them to share their opinions on everything related to dating - even if it meant a battle with the opposite sex. With a fanbase that spanned both the United States and Mexico, we knew that we needed to create content that was exciting enough to grab attention in both countries. It also meant using Spanish, English, and a combination of the two so that we can reach as many eyes, ears, and hearts as possible.

Thanks to the vibrant voice and fun digital assets we created, we garnered over 9,000,000 impressions on social media with a 31% engagement rate. In other words - love was truly in the digital air. There were dates planned in the comment sections, friends tagging each other, and even family members coming together to see the film with each other and share in the laughs. We are also very proud of our ability to lead a digital campaign that stretched between countries, creating an inclusive and entertaining hub that got fans falling head over heels for the film whether they were in Miami or Mexico City. Another big success came in the form of our ability to create a digital base that connected with both the American and Latin American audiences, resulting in an inclusive and entertaining voice that got fans excited for the film.