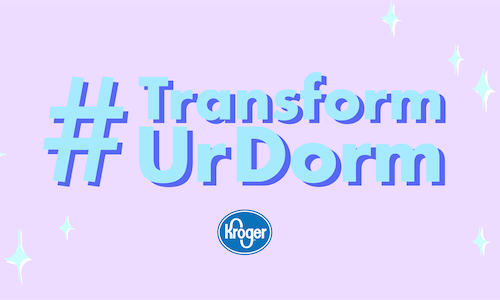 Last year with the 2019 back-to-school shopping season approaching, Kroger had an opportunity to drive awareness and advocacy among a key growth audience: Generation Z.

As young adults are starting to build their own grocery store loyalty post-living with their parents, Kroger wanted to be top-of-mind for not only great food, but also as a shopping destination for college student dorm room essentials. TikTok served as the prime opportunity to connect with this Gen Z audience on an emerging platform they were already active on with a message timely to their shopping mindset.

From August 12 – August 17 Kroger became the first brand globally to activate a shoppable hashtag challenge. Kroger partnered with 4 Gen Z influencers with established clout on the platform to kick-off the challenge known as #TransformUrDorm. These partners used videos to how they were able to transform their living spaces with dorm products – from storage bins, to supplies to small kitchen appliances -  all available at Kroger.

The challenge page hosted both official videos, user generated videos, and included a shoppable functionality for users to shop for the items featured all within the app.

The Road to Success:

Tapping the right Creators: All of the official challenge creators partnered with were chosen for their creativity, Gen Z audience reach, and natural connection to the messaging with them being college-aged or college students themselves.

Driving Purchase intent with a Shoppable Page: Users had the ability to shop within the TikTok app for back-to-school items featured in the creator videos.

Contributing to Brand Uplift: This hashtag challenge also featured a brand lift study measuring the change in brand perception from Kroger being solely a grocer to more of a back-to-school shopping destination among the Gen Z audience.

The campaign generated 806MM+ video views, 304K UGC video creations, and saw a 16.7% engagement rate on TikTok. Along with receiving press coverage from outlets such as AdWeek and Tech Crunch for being the first of it's kind, Kroger was able to shift the perception among Gen Z to show that it is so much more than just a grocery store. According to the brand lift study conducted within the platform, the association that Kroger is primarily a food/grocery store declined by 9%, thus, successfully shifting brand perception to Kroger being a more versatile shopping destination among younger consumers.

Our 4 influencers further amplified the challenge messaging by posting to their Instagram accounts resulting in a total of 2.8MM+ actual impressions, 248K+ engagements, and receiving an engagement rate average of 12.5%.