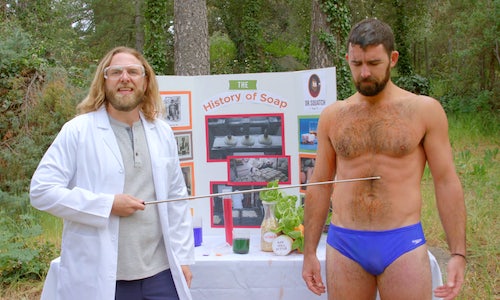 Dr. Squatch is an all-natural men's personal care brand that began when its founder, searching for all-natural products to soothe his skin conditions, realized there were no companies making these products for men. The company mission is to elevate personal care and create products in categories that are under-serving men. The biggest challenge the brand faces is their flagship line of soaps being a highly commoditized product which men don't generally think about. Educating men on the benefits of using all-natural products compared to store-bought brands proved challenging. Further, making high-quality, all-natural products in America resulted in higher prices than what men are used to paying. These factors made it difficult for Dr. Squatch to scale in the early years.

In 2019, Dr. Squatch went "all-in" on longform YouTube ads to address these problems. The team set lofty goals to maintain their ROAS year-over-year while pushing their YouTube budget to $2 million - more than 30 times their spend in 2018. Their blended CPA goal was $18-20; and knowing Google Search would lower their blended CPA substantially, they set a YouTube CPA goal of $35 for 2019. Dr. Squatch also decided a 20% average view rate was a strong goal. At that point, viewers would have watched over 40 seconds of the 3.5-minute video, which was extremely valuable due to the resulting brand exposure. Dr. Squatch also wanted to double their subscription service from 17,000 to 34,000 active subscribers; and acquire 100,000 new customers across all channels in 2019.

Dr. Squatch worked with Raindrop Branding & Advertising and comedian James Schrader to come up with a 3.5-minute longform video ad to run primarily on YouTube. The final product is engaging and entertaining, yet also educates viewers about Dr. Squatch and all-natural products.

The team chose to use YouTube for Action for this campaign. Rather than making the video a brand awareness play, Dr. Squatch was confident an engaging, longform video would be able to drive conversions on YouTube.

Dr. Squatch and Raindrop analyzed customer demographics and created personas , then used the analysis to develop a relevant video. The vast majority (85%) of Dr. Squatch customers were male, and the most profitable age was 25-45 years old, so the video was scripted with that in mind. For instance, a joke about the movie Rudy was chosen because the target demographic likely watched the sports film from the 1990s during their childhood. The dominant customer persona was “The Outdoorsman”, so the video was filmed in a wooded area. The marketing team also determined most new customers switch from traditional soap brands, not all-natural competitors. From this, the team knew their target demographic is generally unaware of all-natural personal care products and their benefits, meaning the video had to explain why all-natural products are important, rather than just pitching the brand alone.

The video was scripted with the intention of keeping viewers entertained during the entire video, with the primary goal of driving performance through purchase conversions. It was designed with the YouTube platform top of mind, but could be cut to numerous lengths to run on other platforms, too.

Regarding the last point, the introduction was written exclusively for success on YouTube. The first line, “Listen up!”, immediately grabs a viewer’s attention and is quickly followed by a bold accusation by the lead character that includes a bleeped-out expletive. This was purposely timed 3 seconds into the ad, before the skip button appears, in an effort to hook viewers. The lead character starts his next line “You probably haven’t even questioned-” before the skip button appears, sparking curiosity and, again, encouraging viewers to watch at least a few more seconds of the ad to hear the end of his line.

To keep viewers entertained the video needed to be funny and fast-paced, so the team used comedia James Schrader as the lead. His comedy style and persona fit the Dr. Squatch brand perfectly, and kept the video full of punchy humor. The video was scripted to include jokes, surprising scene changes such as shower curtains being pulled aside, quick bits of action like the lead catching/picking up items at the 30-second mark, and even a bit of schadenfreude, in order to hold viewers’ attention and educate them.

In order to drive performance, the video educates men on the benefits of all-natural personal care products, addresses common questions, discusses the brand, describes products in detail, and includes several Call To Action lines encouraging people to visit the website and buy.

Thanks to the success of this YouTube campaign, Dr. Squatch exceeded their initial annual budget by over $1 million in YouTube spend while tripling their new customer acquisition and subscription goals for 2019, exceeding 300,000 new customers; and ending the year with 75,000 active subscribers. Dr. Squatch finished 2019 with a YouTube ROAS of 0.98, exactly the same as 2018, but at nearly 50 times the volume of spend - a huge success.

Apart from the overwhelming success on YouTube, Dr. Squatch leveraged this asset on Facebook, where it also exceeded all annual goals and finished the year with a CPA of $17.67 and 7,892 conversions. This was one of the strongest-performing assets on Facebook for the year, coming in under the platform's CPA target of $18-20 and generating the most engagement Dr. Squatch has ever seen on a Facebook ad. Additionally, the video helped drive a higher percentage of Subscriptions than average (23.6% compared to 15-20%), which led to improved LTVs. The video currently has over 15 million views on Facebook.

Video for YouTube: Just What The Dr. (Squatch) Ordered 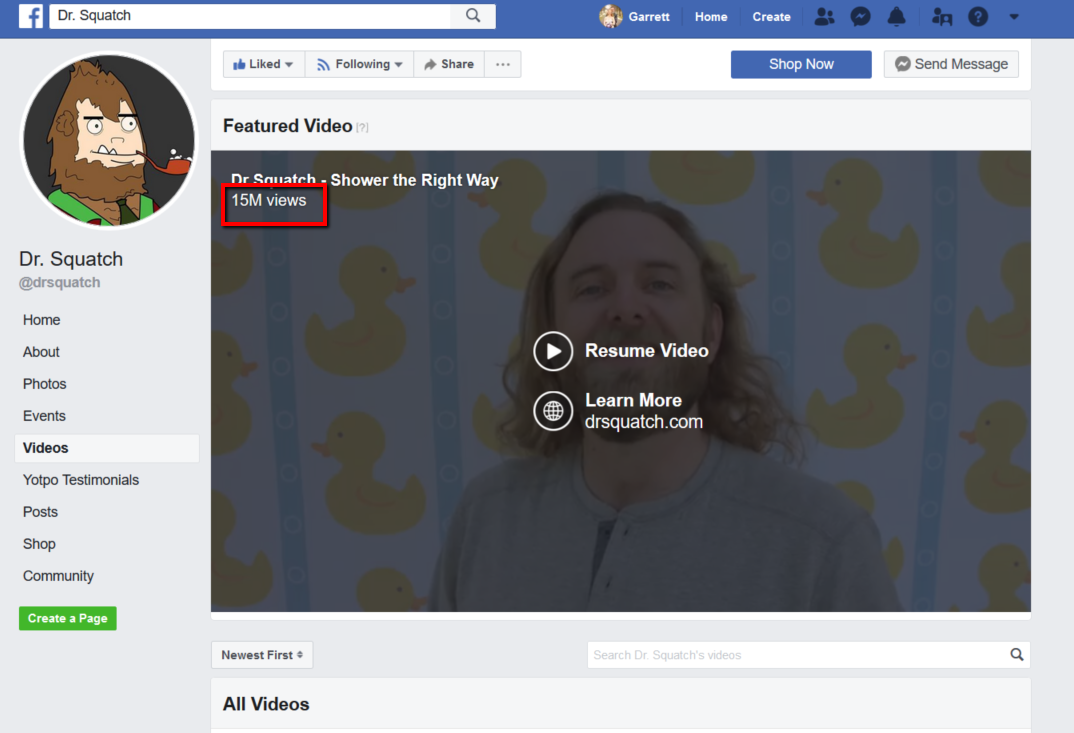 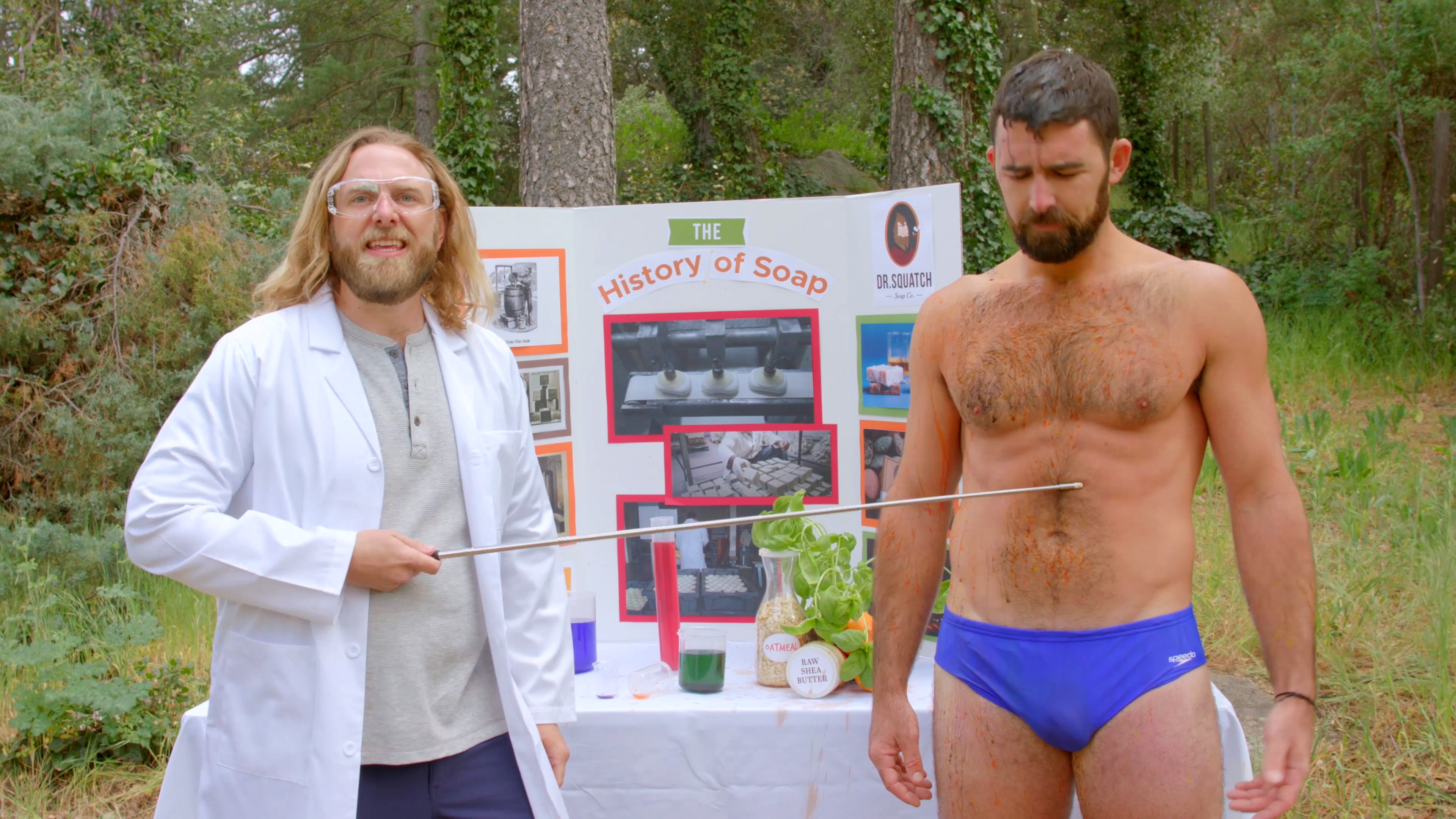 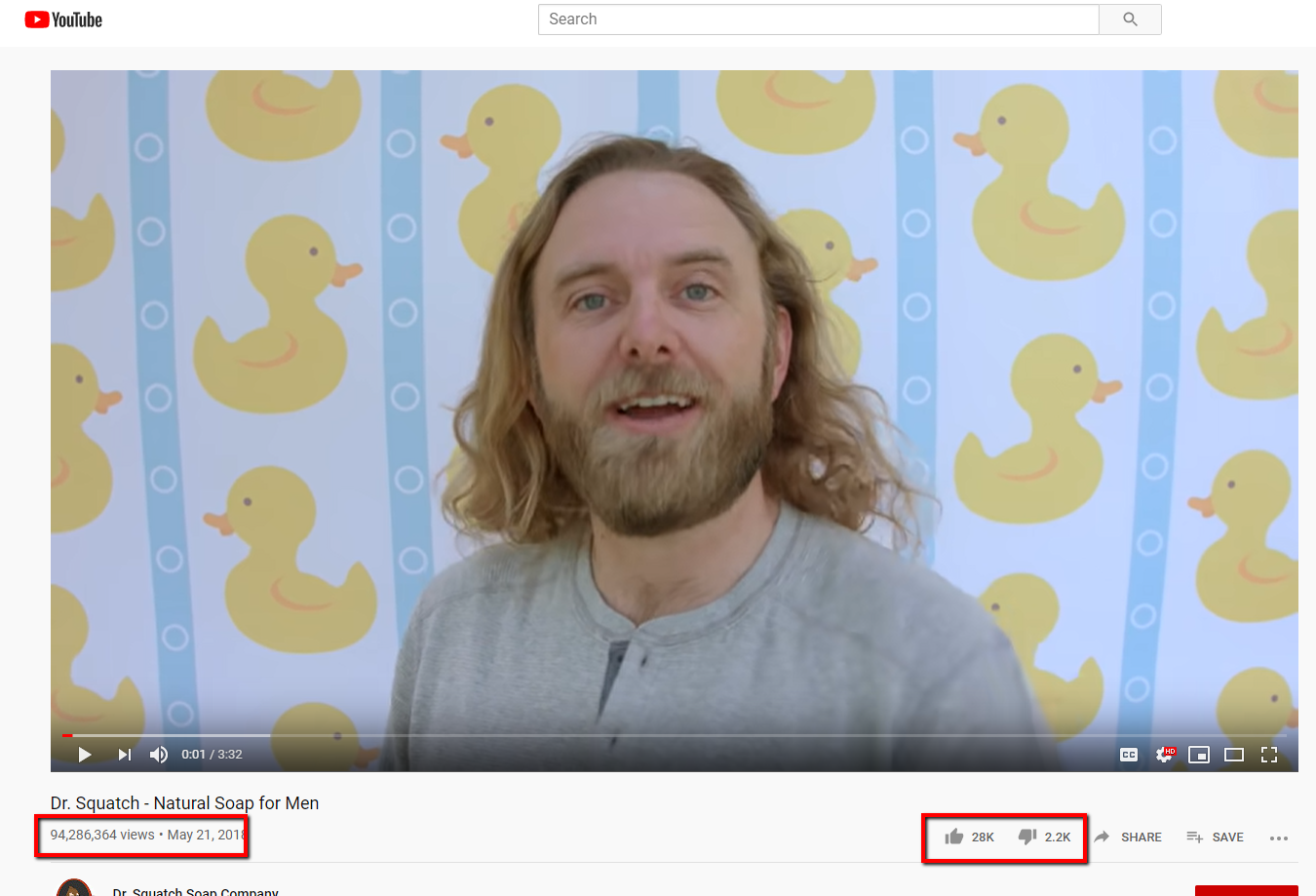 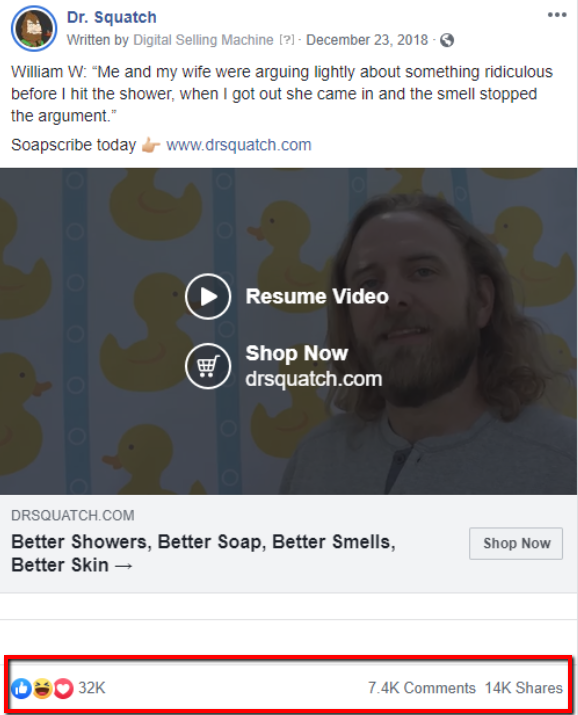