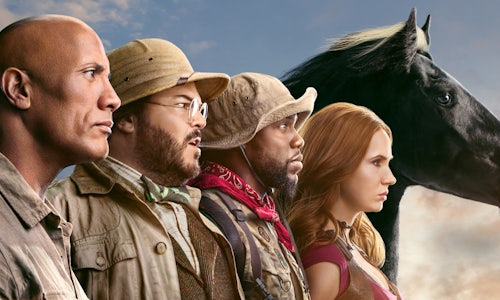 After the huge success of the first film, we wanted to make sure fans knew the best was yet to come by creating a piece that was as funny as it was downright entertaining. It was important to highlight the fact that the characters had swapped yet again and to remind fans that, in the wild world of Jumanji, YLMTO - you live more than once.

Because we were appealing to an international audience, we needed to create something that could be interpreted without any need for a translator. This meant emphasizing the physical comedic talents of Kevin Hart and Dwayne Johnson through the use of powerful, memorable visuals.

We wanted to accentuate the fact that the film was built around a classic property by incorporating another classic property. And, since The Next Level takes place in a video game, it only made sense to make that classic property another game. We chose Street Fighter for its immense popularity all around the world, it’s recognizable visuals and, honestly, because it’s STREET FIGHTER.

Like they do when the Rock hits his signature smolder, users all across the world stopped to watch our Street Fighter video when it hit their feeds. We received an extremely positive response to the piece and generated laughs on an international level.

Video for Jumanji: The Next Level, Street Fight Video