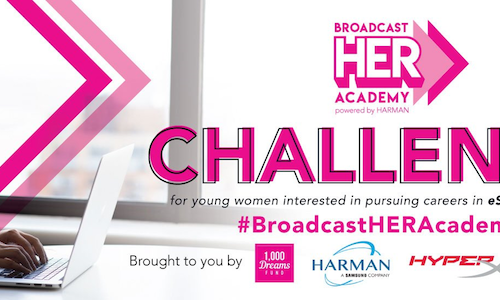 The booming eSports industry has been steadily gaining momentum and is expected to reach $1.79 billion in revenue by 2022. And yet, while women’s influence within eSports and gaming is increasing, many still face challenges in what is still considered a male-dominated field. In fact, although nearly half of gamers in the U.S. are women, less than a quarter of game industry employees identify as female.

With an industry-leading male-to-female ratio of 65% to 35%, HARMAN, a wholly-owned subsidiary of Samsung Electronics Cp., Ltd., has always been a fervent supporter of gender parity in the workplace. In addition, HARMAN makes it a priority to initiate, develop and expand thoughtful partnerships that promote STEAM (Science, Technology, Engineering, Arts, and Math) initiatives amongst the next generation of female leaders of the future.

The BroadcastHER Initiative and grant programs are designed to support women who are pursuing their dreams in gaming, while raising awareness for the continued gap in financial funding for women in the ever-expanding gaming and broadcasting space. In February 2019, HARMAN and the 1,000 Dreams Fund expanded the “BroadcastHER Academy – Powered by HARMAN” program to fund the next generation of women pursuing careers in eSports, gaming, live video streaming and the broadcast industry. Through a photo challenge, applicants entered for the opportunity to win the ultimate prize: a $1,000 microgrant from HARMAN to help further their professional development and an all-expense paid trip to Allied Esports’ global flagship venue, HyperX Esports Arena in Las Vegas.

HARMAN and the 1,000 Dreams Fund developed a targeted online campaign that leveraged social media to offer young women the chance to receive a $1,000 microgrant to put towards their eSports goals, along with the opportunity for an all-expense paid trip to the HyperX Esports Arena in Las Vegas to gain first-hand experience working side-by-side with production and executive teams to execute an eSports event.

Established female broadcasters with 1-3 years of experience were invited to enter via a dedicated microsite by submitting a photo challenge and application that showcased their breadth and depth of talent, commitments, and interest in gaming/broadcasting as a career. Entrants were also asked to produce educational and inspirational content that encourages and inspires young women looking to pursue opportunities in gaming or live video broadcast. An explanation of how the grant would be used to help them pursue their professional goals was also required as part of the application.

Each week, two finalists were selected by a panel of judges and announced via both organization’s social media channels, encouraging other eSports hopefuls to apply as well. After receiving more than 200 applications, a total of twelve eSports-hopefuls received a microgrant, a special behind-the-scenes experience at the HyperX Esports Arena, and mentoring sessions with both HARMAN and HyperX executives.

HARMAN and the 1,000 Dreams Fund received more than 200 inspirational submissions from the next-generation of eSports leaders across the country outlining their professional aspirations – from on-air personalities to full-time competitive gamers. After a rigorous judging process, a total of twelve finalists were selected for their impressive talents and visionary goals. At the HyperX Esports Arena, the finalists received first-hand professional experience during a live gaming event as well as career guidance from HARMAN and HyperX executive mentors.

Social posts promoting the campaign received significant engagement, reaching a combined 359,000+ impressions over the course of the campaign. The campaign sites also experienced considerable engagement with 2,410+ unique visitors and 5,800+ clicks.

Overall, the challenge was a great success, empowering a bold generation of female leaders in the gaming industry and solidifying HARMAN’s position as a leader focused on promoting diversity broadly within all STEM-related fields. Furthermore, four finalists received jobs in the eSports industry as a result of the program.

The push for gender parity is far from over, however. Gender parity in the workplace is an ongoing challenge that requires constant, unified efforts. As a result, HARMAN has continued to collaborate in new ways with its longstanding partners at 1,000 Dreams Fund and push the limits of what’s possible. For example, held this fall, HARMAN and 1,000 Dreams Fund launched the 3rd #NewFaceofTech campaign, a scholarship program aimed at supporting the advancement of young women in the arts and sciences.