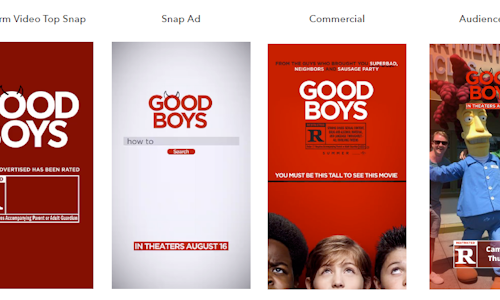 Universal Pictures sought to drive unaided awareness for 'Good Boys' among the film's core demo by engaging target audiences with a combination of custom Snapchat products. The ultimate objective was to increase interest and box office sales for the film, which was released on March 11, 2019.

To help drive unaided awareness with the core demo for 'Good Boys' our campaign focused on promoting bursts of custom content across short periods of time.

We identified Snapchat as the ideal partner for this approach because of the platform's ability to drive users to the film's R-rated 'Red Band' trailer.

Using a package of creatives in multiple placements across the platform, we were able to achieve the frequency necessary to drive lift in awareness and reach the percentage goal of our audience.

In addition to the media that ran in Snap's biddable space, we complimented those campaigns with takeover buys to further insert 'Good Boys' into snackable content.

Our Good Boys Snapchat campaign successfully achieved our intended lift in unaided awareness as well as increases in both Brand and Ad Awareness, with specific growth in key lower funnel metrics. Our ultimate success is evidenced by the performance of 'Good Boys' at the box office, where the film outperformed box office goals, winning its opening weekend and becoming one of the highest grossing comedy films in years.