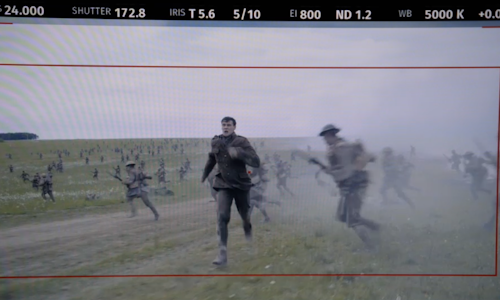 The filming of 1917 was a technical achievement. Long takes and elaborately choreographed moving camera shots give the effect of one continuous take, while the directing style immerses viewers in the journey. Our goal was to create buzz around the film’s incredible technical accomplishments prior to the wide release.

To put the film’s technical achievements on full display, we went on set to capture the beauty of the process. As part of a suite of assets, this medium-length video showcases a side-by-side comparison of the scene from the film in which our lead character George MacKay leaves the trenches to run across an open battlefield. This piece serves to highlight the monumental amount of planning and precise choreography by Director/Writer Sam Mendes, Cinematographer Roger Deakins and the rest of the cast and crew for this intense moment. This exclusive behind-the-scenes look at intricate filmmaking was released during the week of the wide theatrical premiere, multiplying the positive word-of-mouth and critical acclaim chatter since the movie’s limited release.