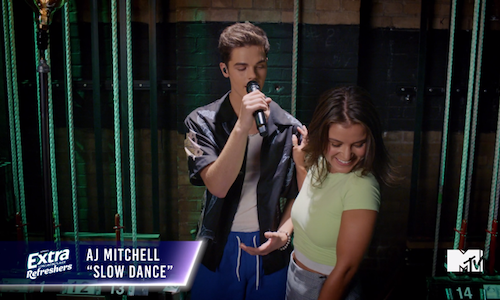 Extra Gum sought out to boost brand awareness and purchase consideration for their new product - Extra Refreshers Gum. The exciting launch looked to bring more energy, life and excitement through music as we capture the attention of the younger consumer.

Viacom Velocity leveraged the credibility and notoriety of the Video Music Awards to create an unprecedented platform for Extra Refreshers Gum to bring their brand message to life. Music was truly the epicenter of this campaign. With a multi-platform campaign rooted in the brand’s thematic “the smallest gestures are the most refreshing”, Viacom Velocity built a custom co-branded program that engaged fans and ignited their love for music. Alongside converting two minutes and thirty-seconds of Extra Refreshers Gum’s commercial inventory into an additional musical VMA performance, the brand’s ethos came to the forefront in the custom co-branded and editorial content as well as through various Twitter and Snapchat products.

When taking into consideration the goals that Extra Refreshers Gum and MTV implemented for this partnership, the VMAs undoubtedly laid down the perfect foundation for this campaign. Knowing our fans’ strongest passion point is music, Extra Refreshers Gum and MTV created engaging and meaningful content that all culminated to a special additional performance on music’s biggest night. Tapping into MTV’s music expertise, Extra Refreshers Gum leveraged the up-and-coming artist, AJ Mitchell, as the star power of this program during a paramount time in his musical career. AJ came with a young fanbase built into his strong social following which gave Extra Refreshers Gum the entry way into telling a compelling story to the younger audience through the co-branded content distributed on MTV’s platform across linear, digital and social.

Better yet, the fans weren’t just watching the content, they were engaging with it as well. Whether it was them submitting a question to our artist or interacting with our musically-driven editorial content, our fans truly resonated with AJ and the brand messaging. The use of brand colors, thematic questions and a discussion of meaningful connections drove home Extra Refreshers Gum’s messaging through each element in a truly authentic way. From an Instagram Q&A with AJ to the “One Man Band” editorial video where AJ answered fan-submitted questions before choosing a musical instrument to play, Extra Refreshers Gum and MTV acted as one to create a robust program anchored in music.

The custom co-branded digital and social content we created also provided a solid road map for fans at-home, leading them in the direction of VMA night where the brand’s two minute and thirty second commercial inventory was converted into a special performance to give fans more of what they crave – music. With performances being the biggest part of the night, Extra Refreshers Gum and MTV used this special performance to infuse brand colors and themes as the backdrop of AJ’s newest song, “Slow Dance” – which has since climbed onto top charts. This special performance gave fans a little something extra, both literally and figuratively.

The special performance was an endemic fit to the pre-existing VMA show, but its strategic placement is what makes this performance extra special. Seamlessly coming out of the main show content into commercial time, Extra Refreshers Gum fully owned the three minute and thirty-second commercial pod. From the bottom of the act, fans at-home witnessed a toss from VMA correspondent, Terrence J, outside the VMA venue that led into AJ’s full special performance followed by a sixty-second Extra Refreshers Gum brand spot. After the full commercial pod takeover, viewers effortlessly continued to watch the show.

After the biggest night of music was over, AJ’s special performance was amplified across MTV and talent’s social handles for those who missed it. An outpour of positive fan support from far and wide embraced AJ’s first-ever VMA performance in partnership with Extra Refreshers Gum.

By utilizing all touch points to reach our younger audience, the Extra Refreshers Gum VMA campaign proved to be a success. Based on a Sponsorship Effectiveness Study conducted by Latitude, the program displayed an overall sense of enjoyment felt by viewers when watching the content, with enjoyment rates ranging between the high 80% to 90%. The campaign garnered the following:

Furthermore, AJ Mitchell’s VMA performance that aired during the brand’s commercial pod takeover performed seamlessly as if the performance was part of the main show. Impressively following the Jonas Brothers winning of the Best Pop award, AJ’s performance retained over 90% of the audience throughout the segment and rated approximately 9.5% higher than the remainder of the pod. 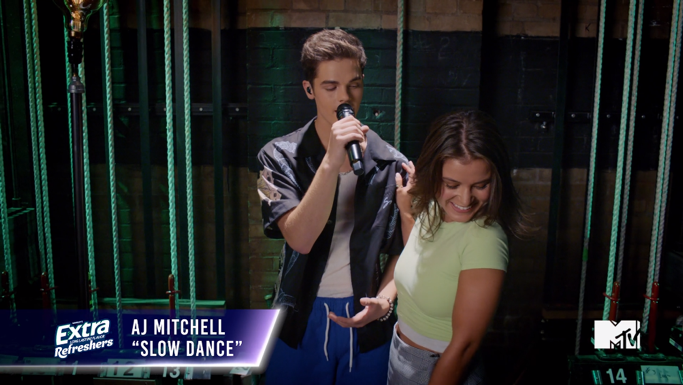