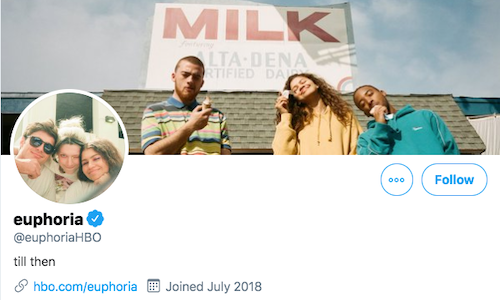 The first season of Euphoria took a raw and unapologetic approach to the sensitive issues facing Gen Z today. The show was unlike anything HBO had made before and was a chance to invite a younger audience to the network -- and more importantly, to empathize with a generation that’s truly overlooked.  When launching Euphoria, HBO knew that social media community building was paramount to connecting with a younger generation. They needed to ensure that the social channels were a safe space for fans to talk about the show and also reach out if they needed support.

The two main goals at the heart of launching Euphoria’s social media communities were:

From the very beginning when Season 1 production kicked off, Euphoria took a community-first approach and launched official presences on Instagram, Twitter and YouTube to authentically connect with Gen Z and the culturally-curious youth. With an always-on strategy, friendly tone and bespoke content for specific digital platforms, Euphoria garnered a passionate community of engaged fans, becoming the #1 social show of the summer on television.

When launching the Euphoria Twitter profile, we knew we had to bring a first person, friendly tone and lean into “STAN” culture to authentically connect with a younger audience. With an always-on strategy, our friendly tone brought in memes and superfan culture, driving over 10M tweets in season with #Euphoria and character names trending weekly.  Cast, including Algee Smith, Hunter Schafer, Barbie Ferreira, Sydney Sweeney and Alexa Demie, all participated in fan Q&As pre-premiere and around their key episodes in order to keep the conversation going. Lastly, given the serious issues tackled on the show, we knew we had a social responsibility. Twitter was also a place where we elevated support and access to crisis management resources including the Crisis Text Hotline which anyone could simply text and reach out if they, or a friend, needed help.

@euphoria on Instagram showcased the series’ visual aesthetic and cultivated a community who quickly connected with the series and the influential cast. Hyper-stylized, “anti-design” animations gave our content a unique “Euphoria feel” driving incremental engagement as the profile skyrocketed to 700k followers in 8 weeks. As the season went on, followers begged for more behind-the-scenes candids featuring this cast with whom they’ve fallen in love.

Launching the Euphoria YouTube Channel was also key to reaching Gen Z and continuing to fuel the conversation around the show with bonus video content that dove into episodic themes. The channel not only housed official trailers, but also featured a robust, diverse content mix ranging from stylized music videos to behind-the-scenes interviews with the cast. This strategy made YouTube a go-to destination for our audience after and between episodes. Series composer Labrinth’s original score was praised by fans, so we launched a music “Visualizer” series, a lean back visual ASMR experience that celebrated the unique music from the show along with stunning visuals from the show.  An “Unfiltered” video interview series showcased conversations around episodic topics and featured Zendaya, Hunter Schafer, Jacob Elordie and more of the cast discussing their characters. The results were unprecedented with the Euphoria YouTube channel gaining over 178K subscribers in just 8 weeks and Season 1 video content reaching over 57M views across all platforms.

We learned the 24/7 always-on social engagement and resource assistance built deep connections and trust with our fanbase. By the end of season 1, Euphoria digital/social platforms grew to over 1M fans, becoming HBO’s 2nd most social series behind Game of Thrones. 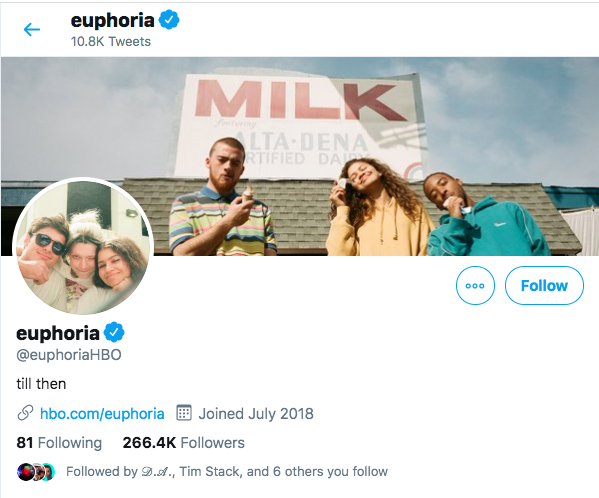 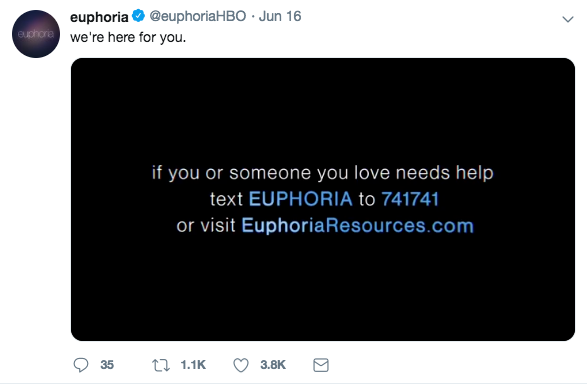