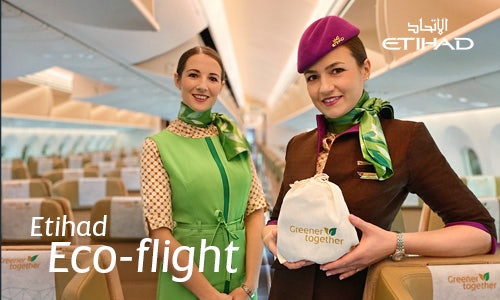 Etihad Aviation Group (EAG) is aligned with the UN 2030 Agenda for Sustainable Development. Our objective is to ensure that we focus on issues of global significance that are relevant regionally and can be addressed locally.

One such issue we’ve identified is the increasing worldwide concern about the impact of single-use plastic pollution, especially within the aviation industry. With the introduction of many new laws restricting their use, EAG launched a new policy to reduce single-use plastics across the business with immediate effect, with a target of an 80% reduction achieved by end of 2022.

We commissioned a company-wide audit to determine the overall use of single-use plastics across the different Group verticals. Our research results indicated: 65% of single-use plastics consumed across the group are used in-flight and customer service areas. 30% of single-use plastic consumption used by Etihad Catering services. 5% of single-use plastic consumption is used by EAG’s global offices. Out of above divisions, the in-flight service not only utilized the largest amount of single-use plastics, it was also customer facing. We focused our strategy on reducing single-use plastics in-flight to not only make a significant overall reduction, but also raise awareness about our commitment to the environment, to improve ourbrand affinity and create an overall enhanced guest experience.We identified over 95 different single-use plastic products across aircraft cabins in every journey. We sourced eco-friendly alternatives (such as bamboo) for each and every one of these items, including cups, cutlery, dishes, headsets, bags, cart seals, toothbrushes and more. On Earth Day –22 April 2019, we became the first airline in the world to operate a single-use-plastic-free flight on an ultra-long-haul sector. We picked the journey from Abu Dhabi, UAE to Brisbane, Australia, which is the longest Dreamliner flight in the Etihad network, in order to achieve maximum impact. Communication began a week before the flight in order to generate buzz and create excitement around the event. Earth Day celebrations began with Abu Dhabi International Airport decorated in green and Etihad staff sporting custom-made Earth Day scarves and ties in support of the initiative.

In-flight, our passengers were first played an in-flight video explaining the impact of single-use plastics on our environment, communicating the urgency of action and demonstrating Etihad’s commitment towards a sustainable future. Passengers were served only with sustainable alternatives throughout their journey. Even our youngest passengers became a

part of the change, by using eco-plush toys and eco-thread blankets –we wanted to inspire our future generation from a young age. Guests were provided complimentary Wi-Fi to share their experience in real-time and become spokespersons for the Etihad Earth Day Flight 2019. Members of the media, scientists and experts from environment agencies as well as social media influencers who are known advocates of eco-friendly travel and tourism, such as Haifa Beseisso, experienced the milestone flight. Across social media channels, we maximised exposure by creating LIVE social content in the form of stories as well as posts, that were boosted for a period of three days after the beginning of the activation. Our in-house communication team created a video news release capturing the entire journey, which was shared with the media distribution as soon as the flight arrived in Brisbane on Earth Day.

We successfully lived up to our pledge of removing 20% of all single-use plastics on-board Etihad flights by June 2019 (within just two months) and are on our way to removing over 100 tonnes of single-use plastics from Etihad in-flight service by the end of the year –a proud achievement for the Etihad Aviation Group.

The Earth Day Flight video reached 6 Million of our audience received over 1.2 million views across our social media channels including Facebook, Instagram, Twitter YouTube, LinkedIn. YouTube alone generated 130,000 organic view making it one of the highest viewed organic video on our channel. On LinkedIn it received almost 5,000 likes and 180 comments, which is phenomenally higher than the standard engagement rate on LinkedIn. Haifa was inspired by the experience and created 6 videos (2 additional videos as an added value) that received over 470,000 reach with an average engagement rate of 1.69% on Instagram.In addition, the news story was picked up by more than 60 global media outlets, including BBC, The Telegraph, Harper’s Bazaar Arabia, Times of India and more, across a combination of digital and print.

As a result of all the learnings from this eco-flight, we launched an ‘eco partnership’ with Boeing and other key suppliers, in which a specially-themed “Etihad Greenliner” aircraft will be used to test products, procedures and initiatives designed to reduce aircraft carbon emissions. 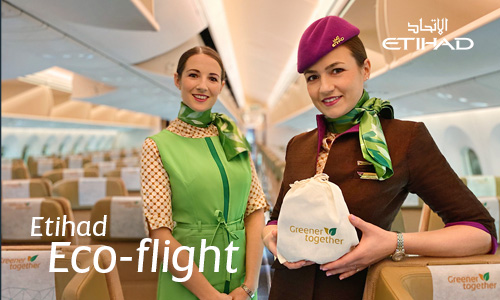