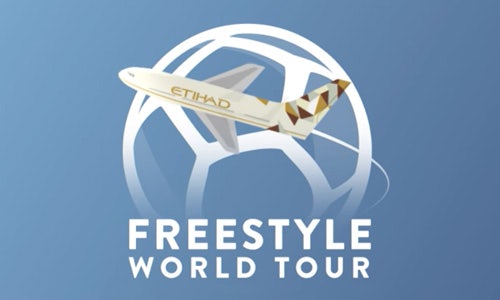 The primary creative challenge was devising a campaign that would reflect Etihad Airways and Manchester City’s shared values and also incorporate their distinct businesses. With one being a luxurious airline company and the other a world-leading football club, embracing their commonalities, as well as differences, would necessitate original thought and creative acumen.

The Freestyle World Tour was our solution. A campaign that took football out of the stadium and around the world. This unique challenge would pitch the world’s best freestyle footballers against one another, in a winner stays on series.

The campaign needed to include multiple outputs that could be released throughout the 2019-2018 football season.

For Etihad, the campaign needed to showcase their world-class service, position it as the brand of ‘choosing well’, whilst promoting Abu Dhabi as a destination, alongside the array of global destinations you can travel to with the airline.

From Manchester City’s perspective, the campaign needed to feel at home on their social media pages and appeal to their global football fan-base. The creative also needed to incorporate their football stars as much and as naturally as possible, despite limited and infrequent player access (three separate one hour filming opportunities with the players at their Manchester training facility). The campaign was to be distributed across all online and social platforms of both Etihad and Manchester City, including some travel-orientated deliverables made to suit Etihad’s in-flight entertainment platform.

Freestyle football became the best way to take football out of the stadium and around the world, with a premium aesthetic achieved by incorporating stunning Etihad Airways destinations into expertly designed freestyle football challenges.

Our suggested football competition would travel through six major Etihad Airways destinations, blending together the best elements of travel and sport. The challenges helped show off the cultural fabric of each city and showcased the freestylers’ skills, personifying Etihad and Manchester City’s joint values of global citizenship and excellence.

We tied in the Manchester City players by allowing them design each freestyle trial at the beginning of each episode. To this end, we also created additional “destination guides”, which were individual pieces of content showcasing each episode destination. For each destination guide, the Etihad Airways cabin crew presented the location, explaining what made it so special.

At the end of each episode, the winner of the challenge got to choose the next destination of the competition, incorporating the idea of “choosing well”. As such, the destinations themselves became part of the prize, reinforcing Etihad Airways and Manchester City’s global outlook. Other additional content included the trick shot challenge, in which each freestyler would set a 3 trick challenge to Manchester City players. Cut-downs of the challenges and teaser trailers were made for every episode, with a final, bonus piece of content at the end of the campaign featuring a choreographed routine performed by all the freestylers, match framed throughout the film

The campaign was the most successful content campaign ever launched by Etihad and Manchester City as a partnership. Etihad have run a branded content sponsorship activation for four seasons prior to our involvement and the launch of the Freestyle World Tour. On average each of the previous season’s activations generated an audience of 6.6 million. Our campaign to date has generated to date 35.2 million views.

On this metric the campaign has been five times more effective than previous seasons.

The series had an average watch rate of 66% on Manchester City’s YouTube channel compared with a club benchmark of 38%. The secondary content, the destination guide films, also performed extremely well with completion rates of 42%, well above expectations. Engagement rates were at 11% which was also higher than the club’s benchmark of 8%.

Etihad and Manchester City’s test group analysis on the impact of the Freestyle World Tour showed that 67% of the exposed group gave positive agree responses to all of the brand statements, all of which centred around Etihad’s new brand mantra, “choose well”. Furthermore, 97% from the same test group agreed to the statement “Etihad Airways is an airline that represents my values”, providing a resounding endorsement for the content campaign.

To date, Manchester City’s social media platforms have amassed on average 4,646,827 views and 159,499 engagements per episode, and a total of over 35 million views, far surpassing the 30 million views target. 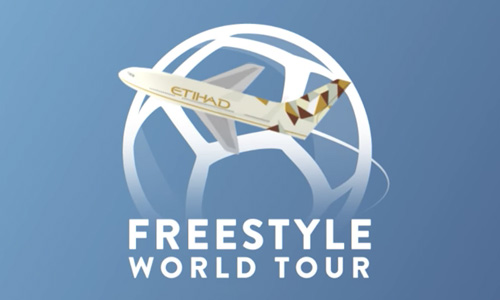