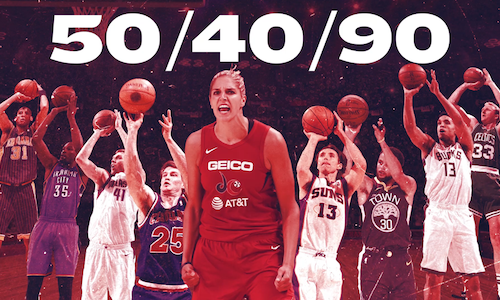 During the 2019 season Elena Delle Donne made history and we wanted to give fans a look into how monumental her accomplishments truly were. This video in particular was made to visually communicate her phenomenal shooting percentages and entrance into the elite 50/40/90 Club.

To be a part of the club, it requires the following minimum statistics: 50% field goal percentage, 40% three-point percentage, and 90% free throw percentage. Since the introduction of the three-point line in the ’79-’80 NBA season, only eight male players reached these statistical benchmarks. Elena became the 9th entry and only female after finishing the 2019 season with 51.5 FG%, 43.0 3PT%, and 97.4 FT%.

As the first woman to meet all of the statistical metrics and join this prestigious group, the video also drove the magnitude of her accomplishment. By creating a video equating her achievement with the men that have done so before her shows that basketball is basketball.

Having a video solely based on Elena’s performance was to specifically target basketball enthusiasts and more so fans that enjoy the analytics behind the game. We specifically produced the video with a mix of highlights of Elena and all eight NBA players to celebrate her accomplishment alongside of the others, while also conveying its exclusivity.

In an effort to significantly expand the reach of the video, our team reached out to several of the eight NBA players (active and retired) who are members of the 50/40/90 club.  We reached out to Steph Curry (NBA Golden State Warriors), Kevin Durant (NBA Brooklyn Nets, formerly NBA Okalahoma City), Dirk Nowitzki (retired NBA Dallas Mavericks), and Steve Nash (retired NBA Phoenix Suns) to alert them to the fact that Elena would be the first female to join the club at the conclusion of our season.    And then when posting the video, we tagged all eight members of the 50/40/90 club.

The video was posted to all Mystics social channels as the buzzer sounded on our final regular season game.  Mystics fans and followers who were watching the game on social were immediately alerted to the milestone and could watch the video.  We also immediately released a press release to alert the media of Elena's accomplishent.  Post-game interviews with media also highlighted Elena's historic milestone.

This was our most engaging and viewed video across Twitter, Instagram, and Facebook combined. It exceeded 2.8M views on Twitter alone and amassed 2.5M cross-platform impressions with an engagement rate of 13.1%. Performing 171x better than any other post. Within 12 hours, the video hit 730K views and 1M views in 15 hours.

Not only are these numbers impressive, but so are Elena Delle Donne’s shooting percentages and the fans as well as other 50/40/90 Club members agree. Shooting 51.6 FG%, 43.0 3PT%, 97.1 FT%, garnered congratulatory comments from the likes of Steph Curry, Kevin Durant: and Reggie Miller:.

Other prominent names in the sports world also shared the video with a congratulations such as Steve Nash, Sarah Spain, Bradley Beal, John Wall, Gatorade, and ESPN/W.

Elena herself commented on how great the video was saying: Who made this video?! This is awesome. Totally humbled by this… continuing on to thank everyone for their support. 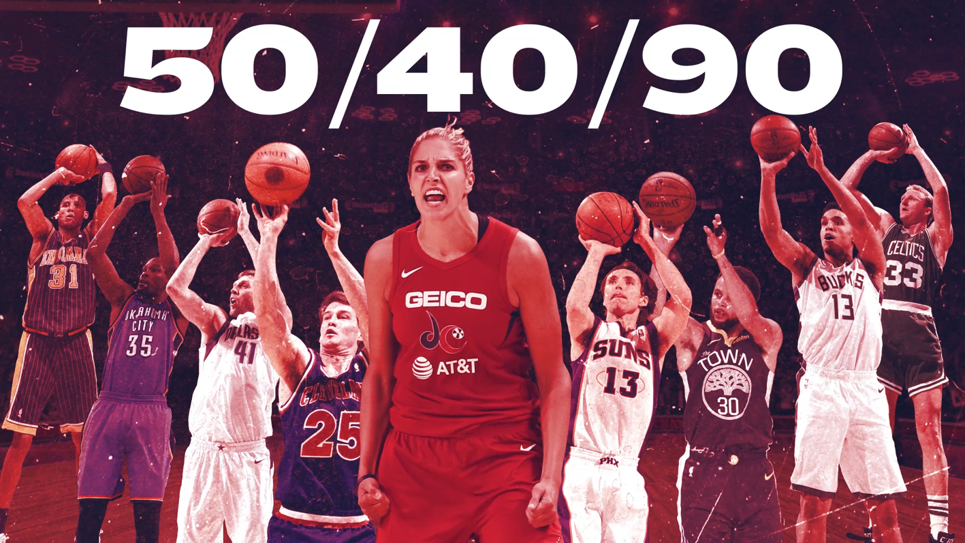