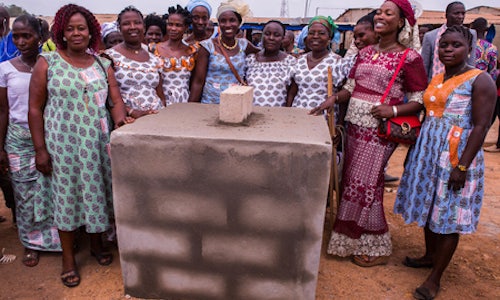 Forty percent of the world’s cocoa is produced in Cote d’Ivoire in West Africa. As a leading chocolate company, DOVE® Chocolate is invested in the wellbeing of the community, ensuring cocoa farming is carried out in a socially and environmentally responsible manner.

As part of its long-term commitment to the cocoa communities within their supply chain, Mars Wrigley (the parent company of DOVE® Chocolate) conducted an assessment of women’s involvement in West African cocoa farms and found women were not benefiting from cocoa production, even though they participate in more than half of cocoa-farming activities. Many of these women operate businesses at a daily market in Gueyo, a central point of commerce within the cocoa-growing communities of Cote d’Ivoire. However, the conditions of the market are not conducive to growing their income. Most of the women sell products outdoors in temporary spots on poor tables that are battered by the elements without access to the appropriate storage facilities for perishable products. Since perishable products make up the majority of their small businesses, the lack of storage is one of the major causes of income loss that the women are subject to throughout the year.

Using the data as our guide, we decided to take the most impactful route possible to empower the female cocoa farmers in Cote d’Ivoire: by finding ways to promote financial literacy and helping carve out the spaces and places where their entrepreneurship could thrive. In other words, teach some financial structure – then create some actual structure.

To take the first step, we partnered with CARE, a leading humanitarian organization working to fight global poverty, to fund and implement Village Savings & Loan Associations (VSLA), setting up a financial infrastructure for female cocoa farmers. Today, 39 communities have VSLA groups and 80 percent of members are women who have invested and borrowed micro-loans with other members of their VSLA groups to grow their small businesses.

With that financial literacy piece in place, we saw an opportunity to expand our impact: by providing these struggling small business owners with physical resources they were lacking.

In March 2019, we launched “She’s In Business,” kicking off the empowerment campaign by announcing the construction of a new marketplace for women-led businesses in Gueyo – with the goal of improving conditions for local female entrepreneurs and the communities they call home. Campaign elements included:

The campaign generated 1,200 media placements and more than 161MM impressions to date, including coverage in top-tier outlets like Ad Age, CNBC and The Drum. Beyond the impressive earned coverage, 93% of comments and engagement on social media were positive, which is the highest positive social sentiment of any DOVE® Chocolate influencer activation to date.

More importantly, nearly 200 women are benefitting from using the marketplace, which opened in October 2019. The reinforced structure provides protection from the sun and rain. It is connected to the electricity grid to allow more light for safer conditions and to expand working hours. New latrines and handwashing stations have also been built to ensure more hygienic practices, in addition to temperature-controlled storage space for women to store their perishable goods overnight. The new market is a physical manifestation of the investment women around the world want to make in the women of Cote d’Ivoire and the greatness that can come from empowering women.

And since 2015, when support of the local women began, on average they’ve saved 138% of their initial investments. Data has also shown other positive effects on social cohesion among women and men within the community, including a 37% increase in women’s influence on household decision-making. 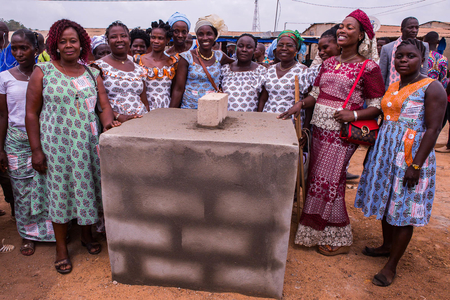