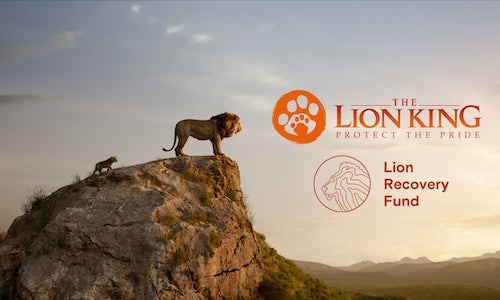 Since Disney’s The Lion King was first released in theatres 25 years ago, Africa has lost half of all lions in the wild. So, as part of the efforts celebrating the release of the 2019 reimagining of the film, The Lion King, Disney announced a global conservation campaign to raise awareness and support the Wildlife Conservation Network’s (WCN) Lion Recovery Fund (LRF), its partners and its vision to double the lion population by 2050 through groundbreaking and collaborative conservation efforts that engage communities to ensure a future for African wildlife and their habitats.

Through this global campaign, the Company, invited employees, cast members, guests, audiences and fans to take part in celebratory products, experiences, and grants as part of The Lion King “Protect the Pride” campaign, for a total contribution of $3 million from the Company.

Leveraging the dedication, expertise and track record of the Disney Conservation Fund (DCF) and utilizing Disney’s convening power to bring together experts tackling the issue, we helped raise awareness for the plight of African Lions. And, by activating Disney’s large global reach and numerous consumer touch points, we utilized resources from across the company to help promote the film’s release with an innovative and impactful cause marketing campaign and provide a philanthropic donation connected to consumer action.

We kicked off the campaign with an enterprise-wide announcement, the launch of the Disney.com/LionKingProtectThePride website and an inspirational and impassioned short-form video (The Lion King Protect the Pride (Talent video) which leveraged the star power and popularity of filmmaker and Director, Jon Favreau, and film talent Donald Glover, Keegan-Michael Key, Seth Rogan, Alfre Woodard, Florence Kasumba, JD McCrary and others promoting the campaign and a consumer call-to-action. Talent also helped to support by pushing out the video through their own social channels.

We provided consumers with opportunities to engage with the campaign through strategic touchpoints connecting them to the WCN’s LRF through philanthropic contributions, aligned with the film’s overarching marketing campaign, and specific cause marketing purchase opportunities and activations. We also utilized storytelling content, platforms, resources and partnerships to elevate awareness and inspire public action for lions.

Leveraging Disney’s global reach, we launched 100+ activations enterprise-wide and through external partners in 35+ countries. Key external partners included Prince Harry and The Royal Foundation’s conservation program, 70+ zoological institutions through Association of Zoos and Aquariums and World Association of Zoos and Aquariums who supported through messaging and local in-person activations.

Disney also hosted the Lion Footprint Forum at Disney’s Animal Kingdom which brought together 90 conservation leaders and funders from 18 countries across Africa to brainstorm effective strategies for the future. The convening was the first of its kind in 20 years.

And additional outcome of the convening took shape in the form of The Lion King Protect the Pride – (Conservation video). Combining the expertise of conservation leaders who participated in the Lion Footprint Forum with clips from the Disney film and footage from WCN’s LRF partners working in the field, we provided a platform to increase public excitement for bringing back the lion population and habitats, and encouraging participation in these efforts.

The Protect the Pride activation offered unique guest experiences at Disney’s Animal Kingdom and products including, special edition Simba and Nala plush whose purchase generated donations by Disney. Other customized tie-ins include bonus content on the in-home release, Regal/IMAX collector tickets, a footprint at the press junket and on the premiere’s red carpet, a Making of The Lion King book, a Playbill insert at The Lion King on Broadway, and employee screenings and conservation panels in Burbank, New York, and Washington, D.C.

Successfully supported the film release -- an important corporate initiative—while amplifying the cause, driving traffic to the organization’s URL, and driving value to Disney. 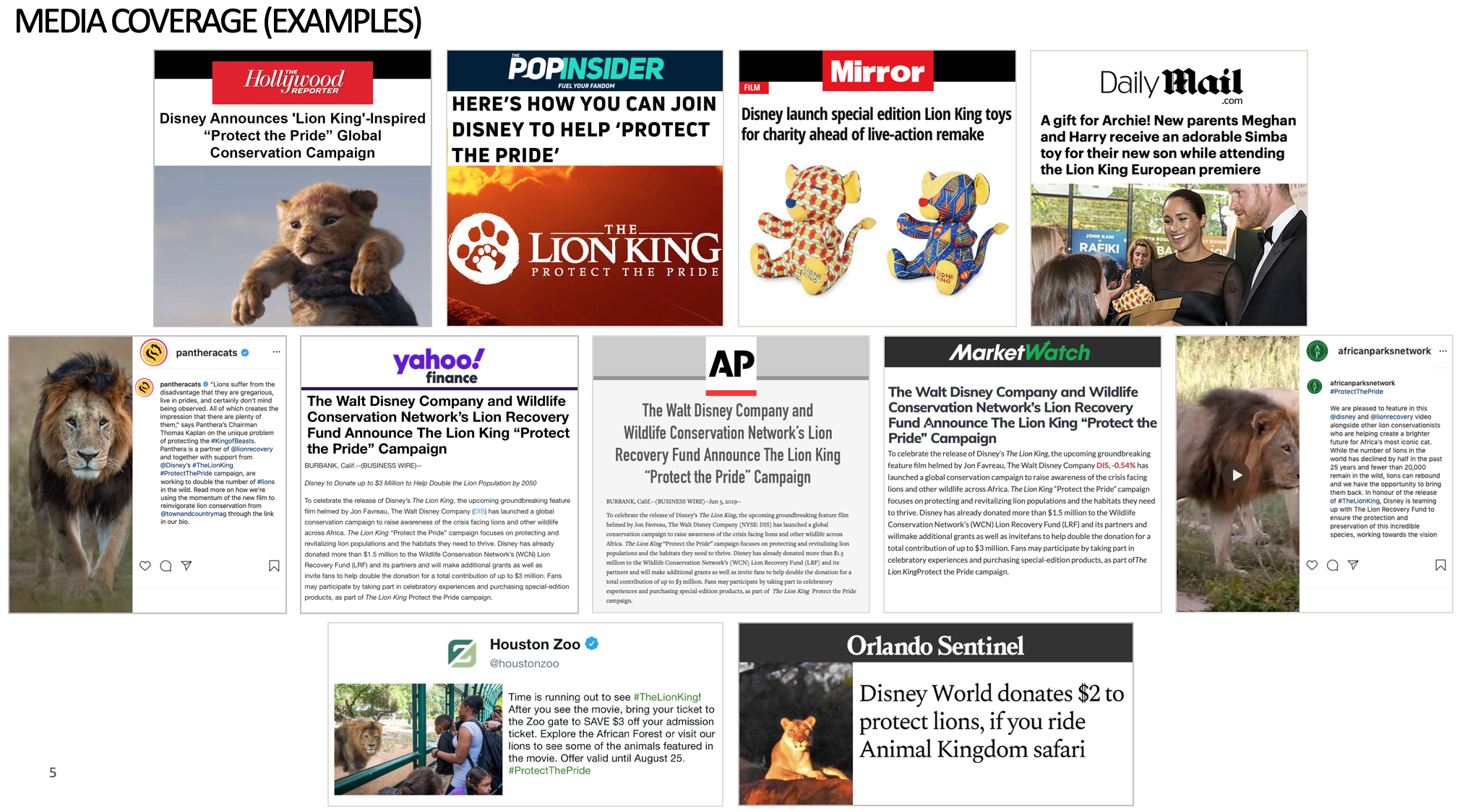 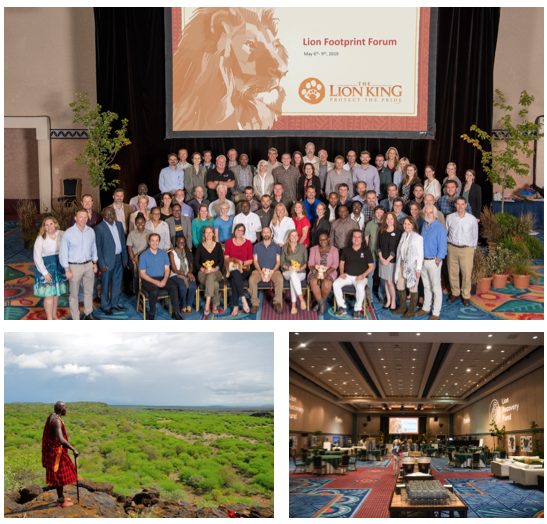 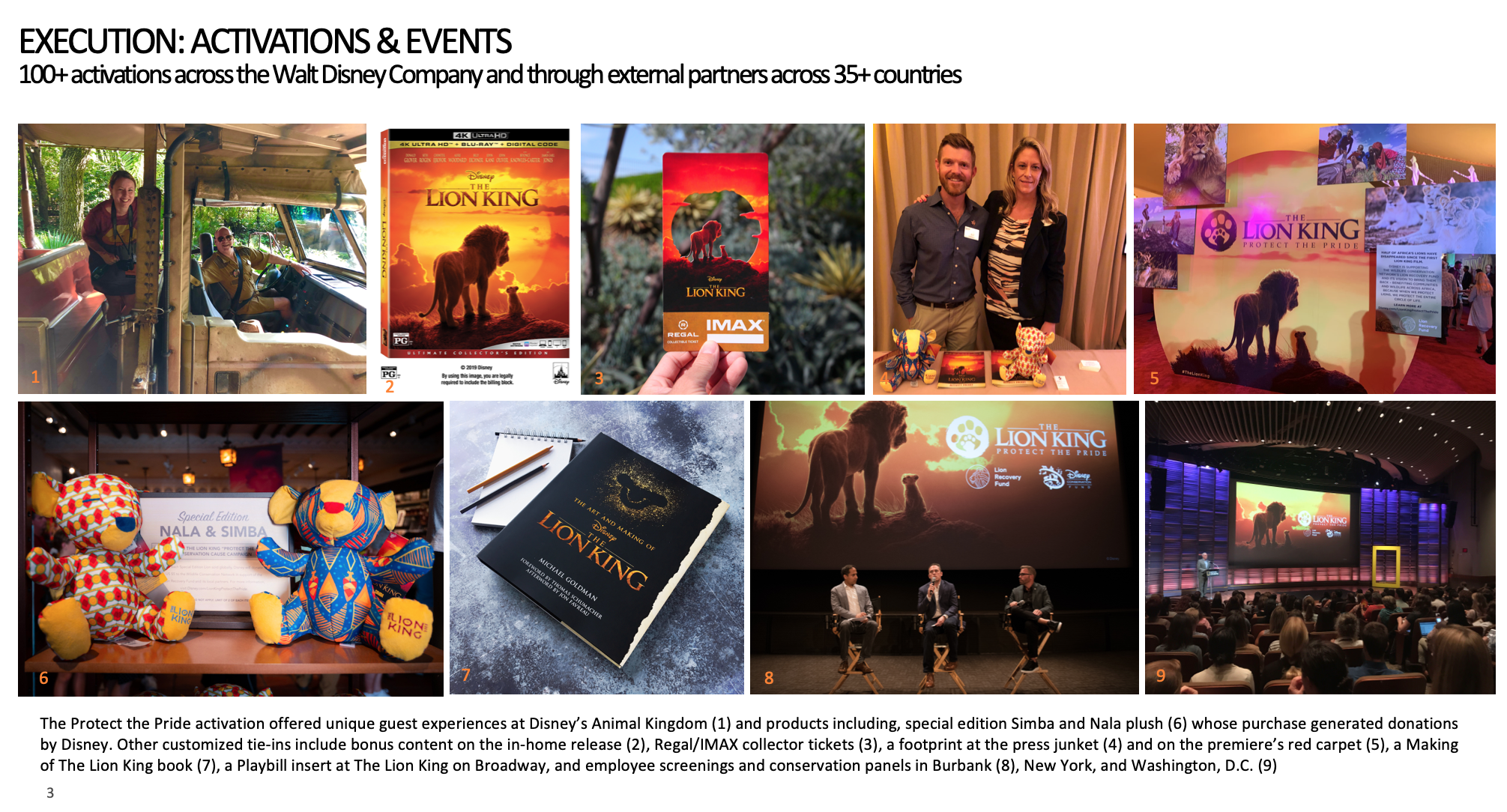 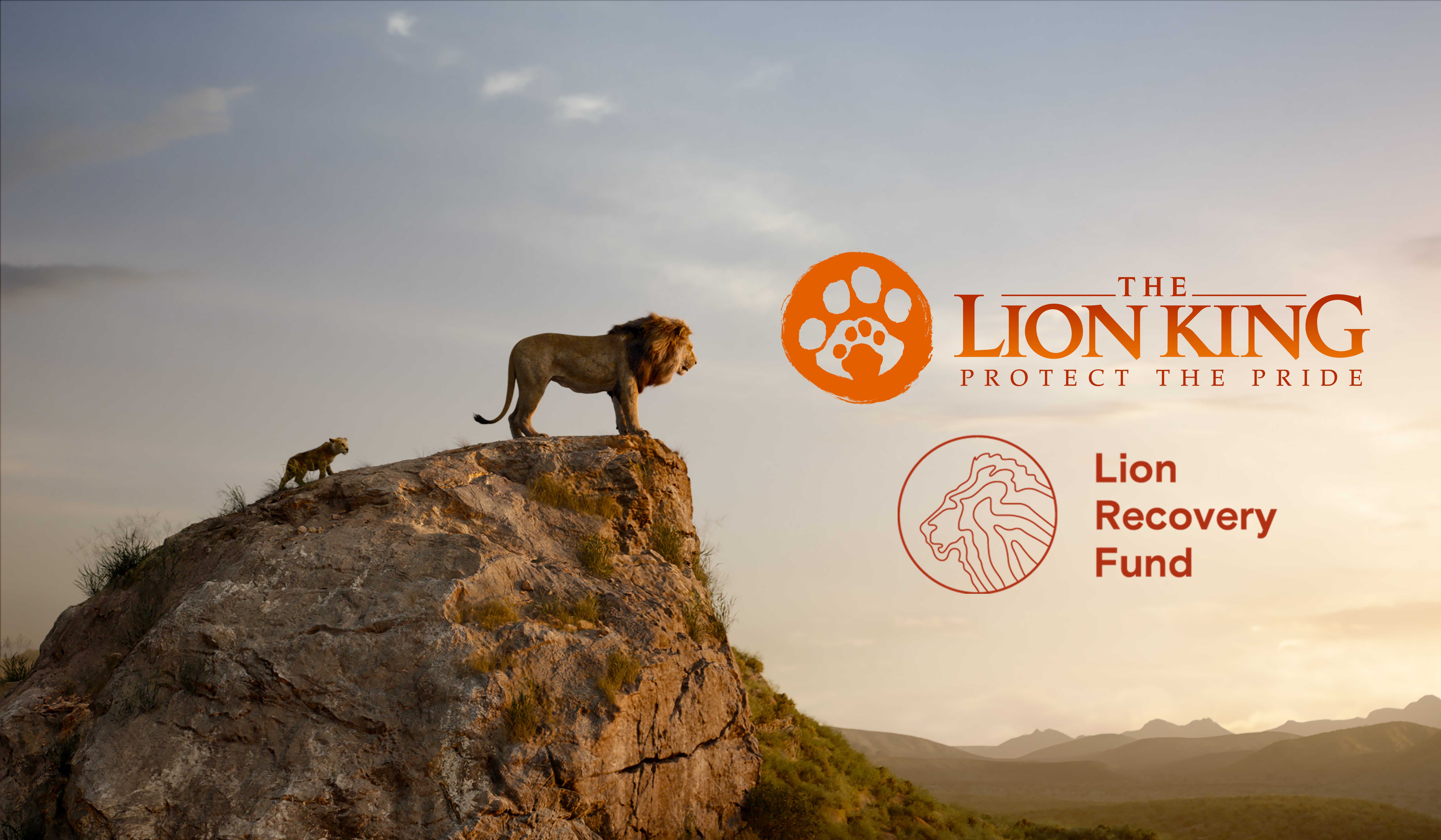