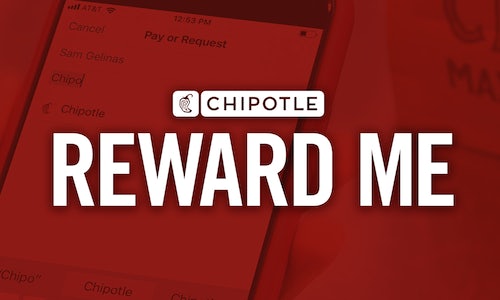 In the midst of one of the most important brand turnarounds in recent memory, Chipotle decided to make a big move, a move that would help it stand out in the crowded quick service restaurant space. Chipotle decided to launch a loyalty program. The program would serve as a way to reward loyal fans who had stuck with the brand through thick and thin, as well bring back those who strayed.

The loyalty program would be primarily based inside the Chipotle app. Users would be able to pay instantly using the app for their food, and the purchase would automatically accumulate points in the Rewards program. And as an extra incentive to use the app, there would be notifications of bonus days with extra reward points on offer, bonus points for trying something new and challenges to accumulate points faster.

Our agency was tasked with driving new signups at launch and creating crucial early momentum for the Rewards program. The loyalty space is crowded. U.S. consumers hold 3.8 billion loyalty program memberships according to a 2017 COLLOQUY Loyalty Census research. Whatever approach our agency took, it had to be truly innovative to break through the clutter of the existing loyalty programs and earn a place in the public's “wallet”, specifically their digital wallet and hopefully their home screen through the Chipotle app.

Even though there are nearly four billion loyalty memberships held in the U.S., the average U.S. consumer only actively uses about half of the memberships they hold (2016, Bond Brand Loyalty). However, 71% said they would be more likely to use their loyalty membership if it was mobile based (2017 Codebroker survey).

In 2019, we crossed an important threshold in the United States. For the first time, the average time spent with our mobile devices each day outpaced time with our televisions (eMarketer). Experts predict that gap will continue to grow. Our mobile devices are only getting more powerful and they're replacing platforms marketers know and love. For loyalty programs and financial products, it is no longer share of a physical wallet, but share of a digital home screen.

This presented our agency with an interesting opportunity for Chipotle. With a stated preference from the public for mobile-based programs and increasing time spent with the device, it was the perfect opportunity go mobile for the campaign.

When considering how to best deliver the Chipotle Rewards story, traditional advertising and the usual mobile placements like pre-roll and in-game interruptions were quickly eliminated.  At least 30% of consumers ignore television, radio and newspaper ads, with a full 82% ignoring online ads (Harris Interactive). And one of Chipotle’s core audiences - Gen Z - is especially repelled by traditional advertising. The emerging group dislike advertising in almost every format - mobile and otherwise - according to a survey by Kantar Millward Brown.

How do you promote a new loyalty program in a crowded space filled with unused memberships without using traditional advertising methods?

As the fastest-growing peer-to-peer payment app, Venmo is underrated as a social network. Each transaction a conversation on spending habits and showing to the world just what brands, food and booze you are loyal to. Before our campaign, Chipotle was already the fourth most mentioned brand on the platform, according to Venmo.

With a need to go mobile and traditional advertising routes off the table for consideration, the answer seemed obvious. Go where the money is and get Chipotle’s target audience talking.

Instead of fighting for space in a person’s social feed amongst sponsored posts and influencer #ads, we headed to the payment feed to form a first-of-its-kind partnership with Venmo. No annoying pre-roll videos or pop-in ads during mobile gameplay—just a story fans want to engage in and share.

By visiting ChipotleRewardMe.com, fans could sign up for Chipotle’s new loyalty program. Each new member could also sign-up to get free money - between $1 and $500 each - from Chipotle via Venmo.

Chipotle integrated into the Venmo user experience by creating FOMO in the payment feed. The payment, featuring a custom emoji (the first restaurant to get its own custom emoji on Venmo) and a link to a mobile-friendly sign-up form infiltrated the feed of the friends of each new Rewards program user. Venmo users saw a native mobile campaign they actually wanted to engage with rather with.

Our agency delivered a first-of-its-kind partnership and drove one million sign-ups to the program with no paid advertising in the first week. 100,000 loyal Chipotle fans received a total of $250k in cold hard cash via Venmo. Each transaction turned into an ad for Chipotle in the payment feed, driving urgent and sustained interest.

This pushed Chipotle’s app to the #1 position among restaurants in the App Store and increased downloads of the app by 480% over the prior 12 months. The campaign also drove one billion earned media impressions including relevant outlets such as The Takeout, Thrillist and USA Today.

Without question, Chipotle is the biggest brand comeback of 2019. The company hit all-time highs in both sales and loyalty from consumers. Our agency helped in a major way by getting the new Rewards program off the ground in an innovative, compelling fashion. 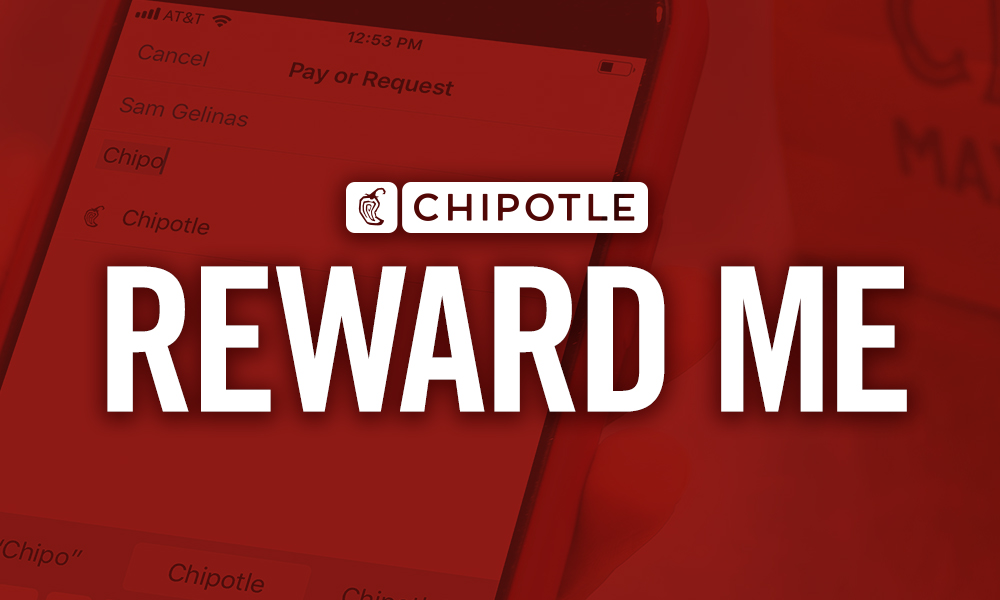 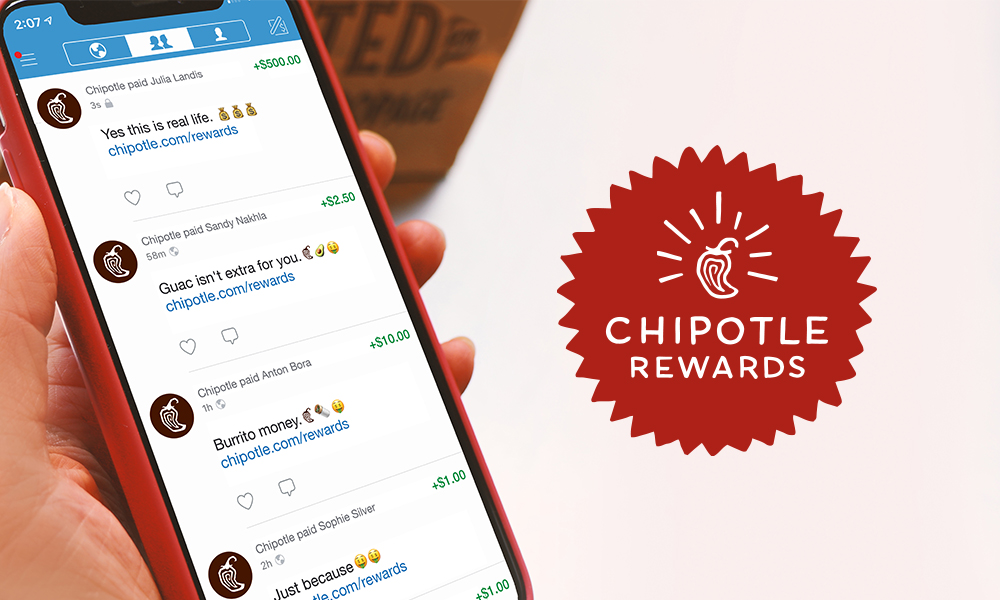 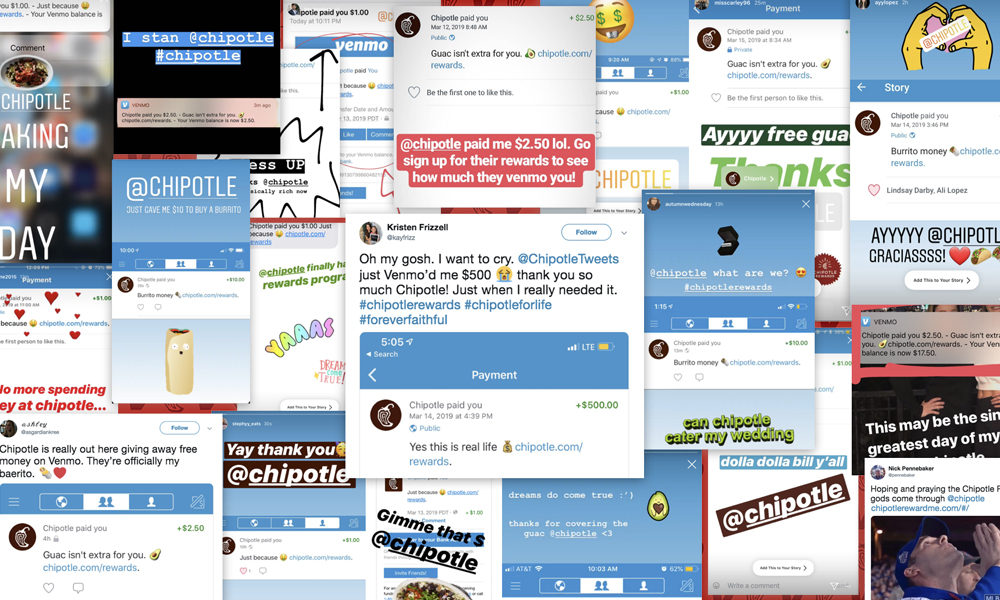 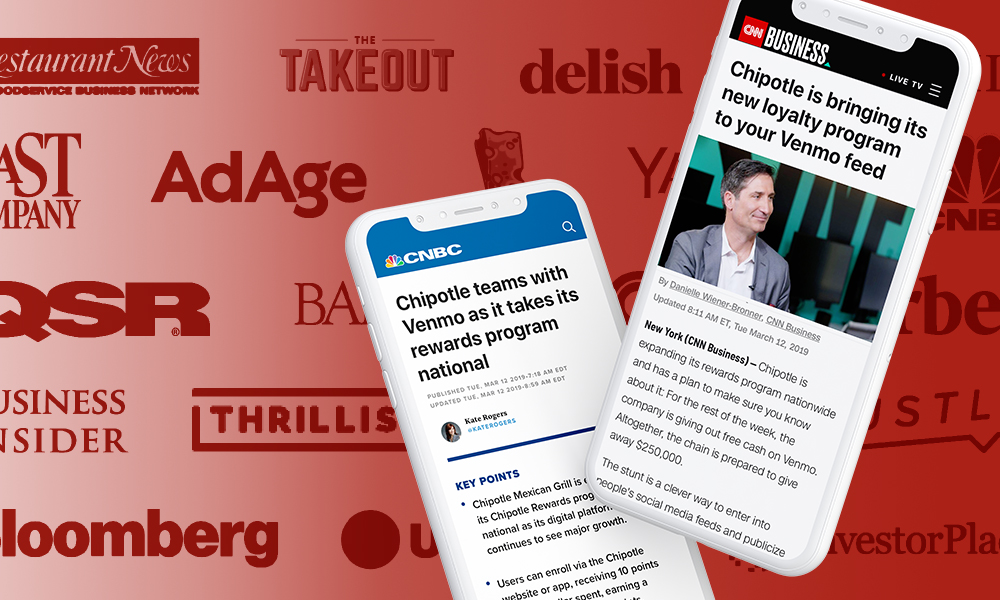