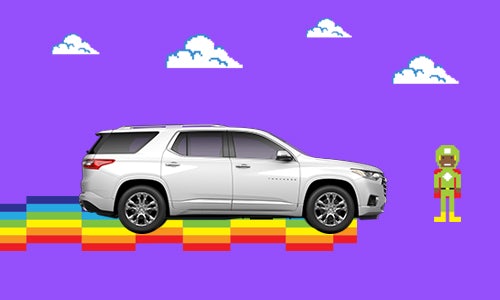 We needed to get people on Snapchat to care about the Chevy SUV lineup, specifically highlighting the features that separate Chevy’s SUVs from the competition. But Snapchat is a pop-culture heavy platform with a youthful audience that skips content quickly. Our goal, and the truth about the social media platform, seemed at odds with each other. So, we had to come up with something that would catch attention, promote the Chevy products and feel natural on Snapchat.

Audience insights showed that Snapchat users have short attention spans but enjoy nostalgia. So, we set out to create a concept that quickly demonstrates product benefits in a way that would maintain interest. Introducing Chevy, Player One, a series of eight 8-bit Snapchat Stories designed to mimic old-school video games. Each Story highlights a specific Chevy SUV and feature.

Although, there was no actual gameplay, the videos needed to feel like you were watching a real game play out. So, the first thing we did was brainstorm the games. Matching each SUV to its intended audience, we ranked the primary reasons for purchase, helping us define which features to highlight. For example: most families that purchase a Chevy Traverse do so because they need to carry a lot of people and a lot of stuff, so one game focused on collecting family, friends and pets, while another focused on collecting items related to family travel and weekend adventures.

Next, the team researched 8-bit games to ensure everything felt authentic. We paid special attention to design attributes like character shading, use of outlines, color choices and background elements. Each SUV needed to maintain its presence as the focal point, so no supporting characters had strong outlines or too much detailed shading, and each game was set in mainly bright backgrounds. Implementing these choices across all executions tied the campaign together seamlessly, helping Snapchat users understand the benefits of each Chevy SUV.

Once we understood each game and the overall design approach, we were able to create custom illustrations and animations. This included backgrounds, environments, people, objects, vehicles and infrastructure. The casual observer may see these games as similar, but we sweated every little detail with each scenario and product feature matching the owner’s persona and playing out as it would in real life. Although each execution appears simple, as we intended, the creative process taught us there is in-fact nothing simple about designing in 8-bit.

Seen as a risk from the start, wondering if we could really get Snapchat audiences to care about the Chevy SUV lineup, the answer was a resounding yes. With a higher than average click through rate, this content series performed better than any prior paid media buy on Snapchat for Chevy. Making the case for more creative content like this in the future.

Video for Chevy, Player One 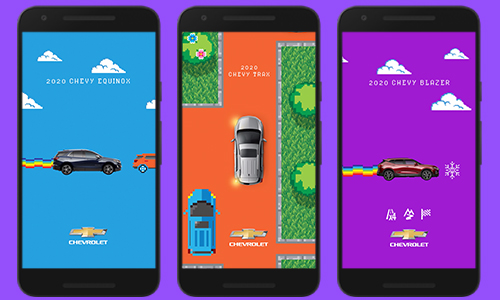 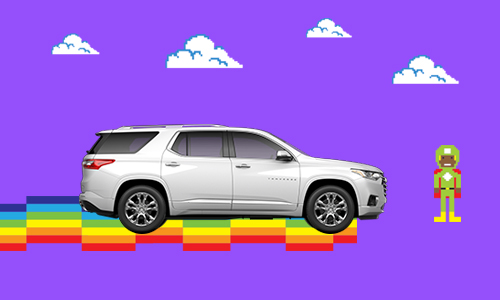