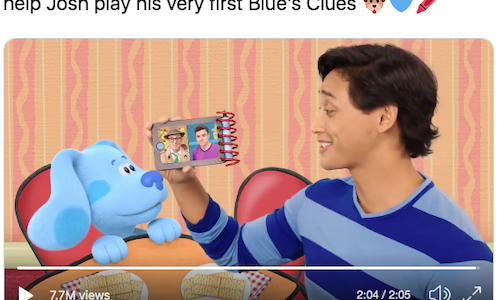 Promote the launch of Blue’s Clues & You through a piece of content that highlighted the new series while also optimizing on the strong nostalgia and love that surrounds the original series.

Promoting reboots can be tricky, as fans are always protective of the original. That certainly was the case with our massive Blue’s Clues fanbase as they were skeptical of this new series. We knew we needed to give them a glimpse into what the series would look like and to show that while there were changes (yes, the Handy Dandy Notebook needed some smartphone capabilities...it is 2019), the show was still true to its roots and that their all time favorites were going to be along for this new ride. This clip highlighted all of those things-fans got to see the new and improved Handy Dandy Notebook for the first time and they also got a visit from their old friends Steve and Joe, who invited Josh to play Blue’s Clues for the first time. At the end of the clip, not only was Josh ready to play his first game of Blue’s Clues but our audience was ready to play with him.

This Twitter post is our all time top performer across all platforms, receiving over 11 million impressions, 7.7 million views (and counting) and 2.8 million total engagements. Beyond metrics, we ended the day by being the 5th trending topic among Twitter’s United States Trends. This post also received the most overwhelming positive sentiment compared to our other posts, with floods of comments about how Nickelodeon is doing this reboot justice, that they were beyond excited to see Steve and Joe in the series, and that they were ready for the torch to be passed to Josh. We also saw great fan sentiment in the form of fan art, capturing all three hosts and their favorite pup, Blue. This post did exactly what it was intended to do-show fans that while there are some fun changes to the series, at its core it still remains the show generations grew up to know and love and that it will become a fan favorite for new generations to come. 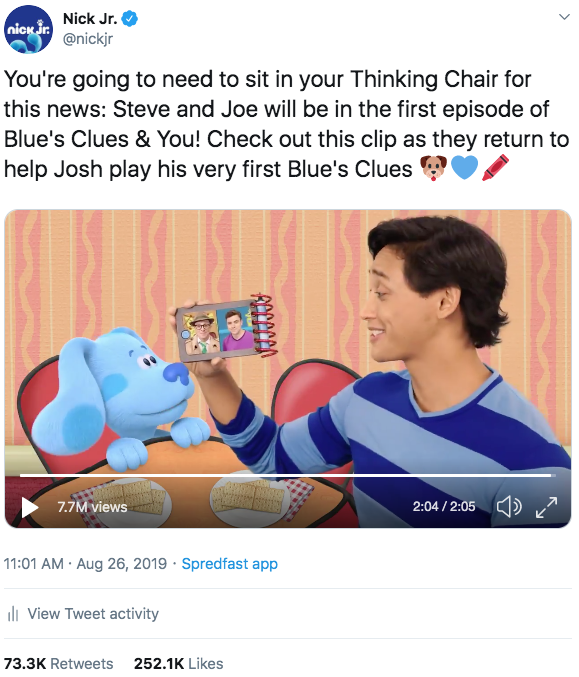