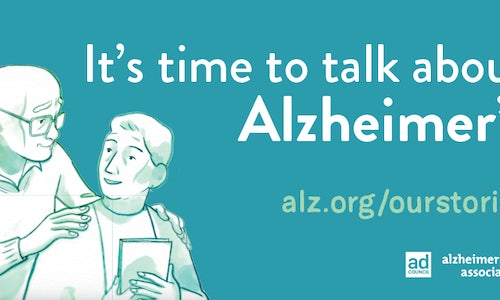 The Ad Council & The Alzheimer’s Association: Our Stories Campaign

More than 5 million Americans live with Alzheimer’s but less than half are diagnosed. While there’s no cure for the disease, getting an early diagnosis is critical, as it can lead to better outcomes for both individuals with Alzheimer’s and their loved ones. The prevalence of the disease is higher among African American and Hispanic adults.

Research shows that close family members, who know their loved ones best, are typically the first to notice memory issues or cognitive problems in their spouses or parents, but they’re often hesitant to say something – even when they know something is wrong.

The Ad Council, The Alzheimer’s Association and the community came together to create the Our Stories campaign in order to empower adults to trust their gut and have a conversation about Alzheimer’s when they notice something different in a loved one.

To better understand our target audience’s perspective on this issue, we conducted extensive qualitative research with our target audience, inspiring our “way in” for the campaign. Through that research, we discovered that for many in our target audience (adults 45-65 with a parent or spouse 65+) the possibility of a loved one having or developing Alzheimer’s is often not on their radar. If a loved one exhibited signs of the disease, the symptoms were often dismissed as being signs of old age… not a major cause for concern. And for those who did have Alzheimer’s on their radar, many didn’t understand the major benefits of getting a diagnosis or know how to approach the conversation with a loved one if they did have concerns.

To empower people to take the critical first step towards getting a diagnosis by initiating a conversation with their loved one, we needed to give them permission to act on their gut when they noticed a change in a loved one’s attitude or behavior.

This strategy is brought to life in Our Stories, a national multimedia, English & Spanish PSA campaign that appears entirely in donated, earned and owned media. This includes:

The creative features real stories of people who noticed cognitive changes in a family member and took the first, difficult step to initiate a conversation. All PSAs drive to the campaign website, Alz.org/OurStories, which provides an immersive web experience and uses innovation and art to show the real stories of families living with Alzheimer’s. The website also includes a new, interactive conversation guide to help families talk about Alzheimer's, as well as useful resources that inform users about the signs/symptoms of the disease.

In the seven months since the Our Stories campaign launched, the PSAs have received over 277,967,776 impressions through support from top outlets ideal for reaching our audience, including Comcast, A&E and Lifetime.

PSAs have driven over 75,000 visits to the campaign website within that time. More than 2,000 people have swiped through three of the conversation cards in our interactive discussion guide, and more than 1,000 people have completed at least one video on the site.

Additionally, we’re already seeing meaningful shifts in our target’s attitudes and behaviors. In the first 6 months of the campaign, our continuous tracking study (fielded through Ipsos Public Affairs) has shown the following shifts among our target audience, indicating that they are seeing the work and it’s resonating:

Video for The Ad Council & The Alzheimer’s Association: Our Stories Campaign

The Ad Council, The Alzheimer’s Association & The community