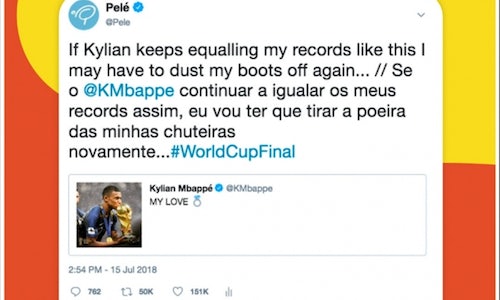 For a generation, soccer was one man: Pelé. But even for legends, memories can fade over time. Our challenge was to reintroduce Pelé's brand to modern audiences and build relevance with today's youth through social channels.

Our objectives were to build and grow awareness of Pele brand as well as grow social followers and engagement in order to open up new partnership opportunities.

The key, as we saw it, was to make Pelé more current and personable. Therefore our Twitter strategy was focused on interacting with young star players and joining trending conversations.

During the 2018 World Cup, which marked 60th anniversary of Pelé's debut, we put extra effort into social listening and monitoring and really being present in the topic as much as possible.

When a 19-year-old Kylian Mbappe scored 2 goals against Argentina, he became the only teenager after Pelé to score 2 goals in a World Cup. We used social listening tool to gain this insight and our reaction tweet became Pelé's most successful ever (41,000 likes and 7,700 re-tweets).

But in two weeks, during the World Cup final, we broke our record again.Mbappe scored a goal and became the only teenager since Pelé to do so in a World Cup Final. Our social media team was waiting for this goal. We immediately joked on Twitter that Pelé "may have to dust off his boots again" if Kylian keeps equalling his records.This tweet was picked up worldwide by TV channels, press, and sports media: 13 million organic impressions, over 200,000 likes and retweets, and an engagement rate 92 times above average.This resulted in 33,000 new followers in 24 hours, higher than Pelé had ever had in an entire month!

As Mbappe replied, "the king will always remain king".

In addition to our most successful tweet ever, which resulted in over 200,000 interactions (which is 92 times higher than we got before on average) and 33,000 new followers on Twitter in 24 hours (more than we ever had in a month), our overall social strategy paid off big time:

All of these results were achieved organically, without any paid media support. 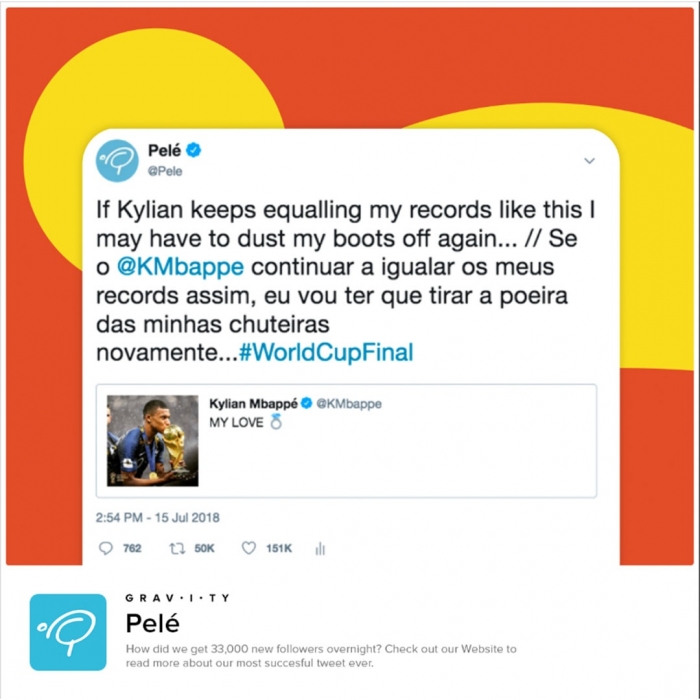