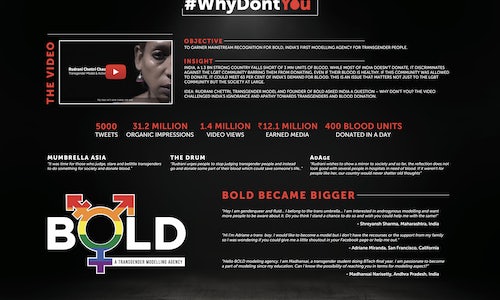 There is no doubt that we Indians are by nature philanthropic but when it comes to Blood Donation, we somewhere refrain ourselves thus India being a 1.3 Billion strong country falls short of 3 million units of blood every year. While most of the country doesn't donate but there is this one community out there, The Transgenders/LGBT Community, who desire and wish to donate blood but are not allowed to for various reasons & if this community was allowed to donate, it could meet 65 per cent of India's demand for blood. This is an issue that matters not just to the LGBT community but the society at large.

The brief was to highlight the plight of LGBT community versus the need and demand of Blood in our country.

The objective was to garner mainstream recognition for bold, India's first modelling agency for transgender people.

India, a 1.3 Billion strong country needs 5 crore units of blood annually against an availability of 2.5 crore units. There is another very interesting insight that popped up. There is this one community out there, The Transgenders, who wish to donate blood but are not allowed to for various reasons and the fact is that if this community was allowed to donate, it could meet 65 per cent of India's demand for blood.

The target audience involves each and every one of us who can and should donate blood but does not. Digital was our most preferred platform as it made us reach the masses thus helping us spread the word. The approach was simply to garner maximum reach and spread a word about the third gender who are discarded by the society more importantly their blood, which can save a million lives.

On the occasion of World Donor Day, BOLD, a transgender modeling agency launched a campaign titled, #whydontyou where in Rudrani Chettri, transgender model and Founder of BOLD asked India a question – why don't you? She was seen in the video challenging India's ignorance and apathy towards transgenders and blood donation.

She is seen urging the rest strata to stop judging them instead go and donate some part of their blood which could save a needy.

As a part of the campaign, a microsite www.whydontyou.in was created wherein a donor can register and donate blood with a Mumbai based blood donation bank, Triumph Blood Donation bank and for records, India needs 5 crore units of blood annually against an availability of 2.5 crore units.

The campaign was executed on various digital media platforms including Youtube, Facebook and Twitter. After a couple of hours of its launch the campaign created a buzz on social media, garnering encouraging number of engagements on various platforms. The hard hitting campaign video reached out to millions of people which resulted 400 Blood Units Donated In a day.

400 BLOOD UNITS DONATED IN A DAY 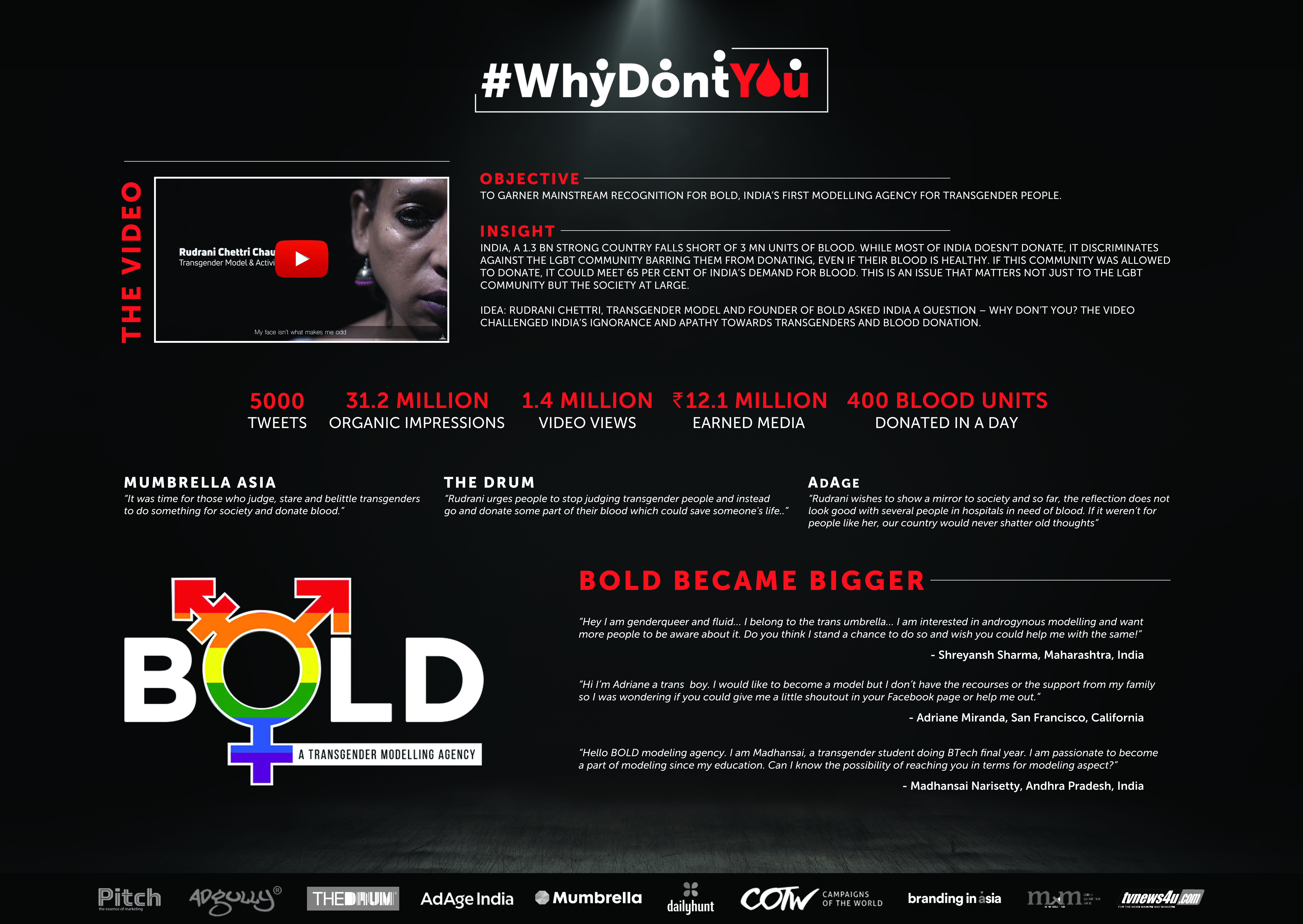