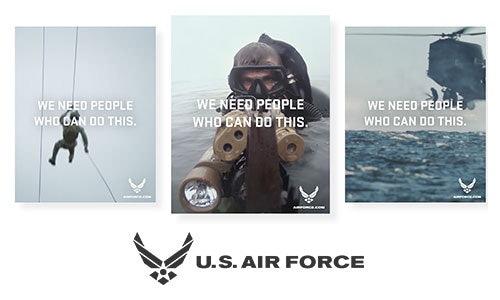 Special operators are among the most unique and specialized Airmen and, therefore, the most difficult to find and recruit. Awareness of Air Force Special Operations pales in comparison to other branches, forcing recruiters to spend 40% of their time recruiting 3% of the Air Force.

To close the gap with the SEALs and Green Berets, our primary goal in this effort was to significantly increase awareness that the Air Force offers Special Operations careers as measured by proprietary brand studies, search trends and traffic to the site.

However, the urgency of the need for special operators drove our real mission—get more of the best people into Air Force Special Operations fast.

In a time when marketers are doing everything in their power to make things easy for customers, we had to make things hard. Only those who can rise to a challenge will succeed.

This led to three key features for development:

The campaign was adapted for multiple placements across the digital and traditional ecosystem, including:

WHAT'S UNIQUE?: "We Need People Who Can Do This" posed an immediate challenge to anyone engaging with the campaign. Content included real-life training missions that gave a glimpse into intense scenarios special operators go through every day. The placement was fully immersive and allowed users to "try on" the Air Force in a way not previously possible.

The training mission content became immersive through the use of 360˚ video published across social channels. Through Facebook/Instagram live streams, the Air Force gave audiences access to real, active-duty special operators for Q&A and a firsthand look into internal training.

Using the "Special Operations Training" content for the TV spot, YouTube videos and social in-feed videos intended to drive awareness, we utilized a retargeting tactic, delivering the :06 videos to those who engaged with the :15 social videos to reinforce the message and to generate leads.

●Content was customized across platforms. We didn't reuse or repurpose existing assets. The goal was to create channel- and placement-specific experiences tying back to the "We Need People Who Can Do This" strategy.

The campaign resulted in an 873% increase in search traffic for related keywords, and traffic to Special Ops pages increased 67%.

This campaign catapulted Air Force Special Operations into the conversation as one of the nation's most elite and vital forces, right where they deserve to be. 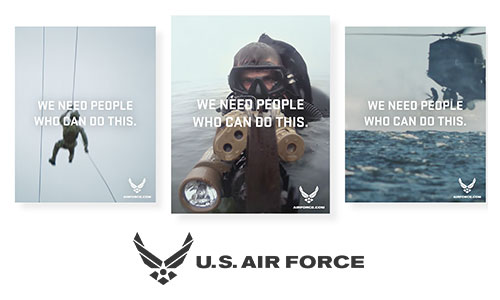