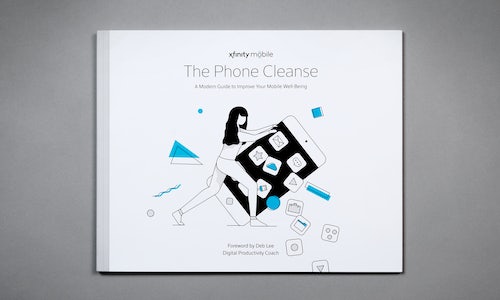 The Phone Cleanse by Xfinity Mobile

Simply put: we set out to drive awareness of the Xfinity Mobile brand.

As a newcomer to the tech & wireless category, Xfinity Mobile (XM) was looking for a way to raise their profile in key markets around the country. Despite launching a year earlier, the brand was still getting overlooked in a crowded field of mobile carriers. Our goal was to make them stand out—not just through paid media, but with a concept that would capture the attention of smartphone users across the U.S. No big deal.

It started with a modern truth: nearly everyone has a love/hate relationship with their phones. Smartphones are the most trusted piece of technology that people own, but they've also grown into a source of constant anxiety. The alerts. The bloat. The relentless buzzing. While our competitors kept offering more unnecessary innovations and add-ons, we tried something different. To get smartphone users to fall back in love with their phones—and to care about XM—we showed the world how to use their phones less.

Our idea was the Phone Cleanse—a 7-day regimen filled with tips and challenges to help people reboot the relationship they have with their phone. This wasn't about mobile hacks—the Phone Cleanse was intended to jolt users from their routine and give them a new sense of "mobile well-being."

To give smartphone users their best hope at curing their tech addiction, we delivered the Cleanse in a format that minimized screen time: an actual book. That's right, a digital campaign centered around a paperback book. Inside, users placed their device into a phone-sized cut-out (fit for both Android or Apple) and the surrounding illustrations guided them through daily Cleanse steps. This interactive element allowed readers to seamlessly adjust settings (i.e. menu options, button shortcuts) without jumping between their phone and our content.

Every chapter of the Cleanse was a different challenge designed to combat a common mobile issue: cut down on distractions by deleting 10 apps, clear bloat by getting rid of 5 gigs worth of media, avoid mindless Instagram scroll by turning your screen gray. After a week's worth of challenges, our hope was that people would begin using their existing device with a new sense of purpose and efficiency. For the first time, a mobile company was teaching the world about the benefits of not using their phone so much.

To spark our Phone Cleanse movement, we put the book into the hands of the most phone-obsessed people we knew: influencers. Our challenge to them: take our 7-day Phone Cleanse and post the progress.

The impact was immediate. Not only did these influencers start to acknowledge their improved "mobile well-being", but followers began to ask how they could try the Phone Cleanse. That's when we made it available for everyone.

Wherever people were struggling with mobile addiction, we created custom social versions of the Cleanse. Facebook. Snapchat. Pinterest. Each chapter became a snackable piece of content designed especially for mobile consumption. From there, we built a mobile-first experience where visitors could take the full 7-day Cleanse and even request a free hard copy of the book with just a Tweet.

The Phone Cleanse wasn't a one-off stunt, it was Xfinity Mobile's chance to make a statement on mobile technology. Phones are at the center of what the brand does, so it was important that we educated the public on how to have the best possible relationship with their device.

As we did, our audience—and the national media—took notice.

From the outset, we wanted to make people aware of the Xfinity Mobile brand. The popularity of the Phone Cleanse on earned and paid media did just that.

In less than three months, our program became the cleanse of the summer. Nearly 600,000 people attempted the Phone Cleanse, giving our young, upstart brand the attention and awareness it was looking for.

Video for The Phone Cleanse by Xfinity Mobile 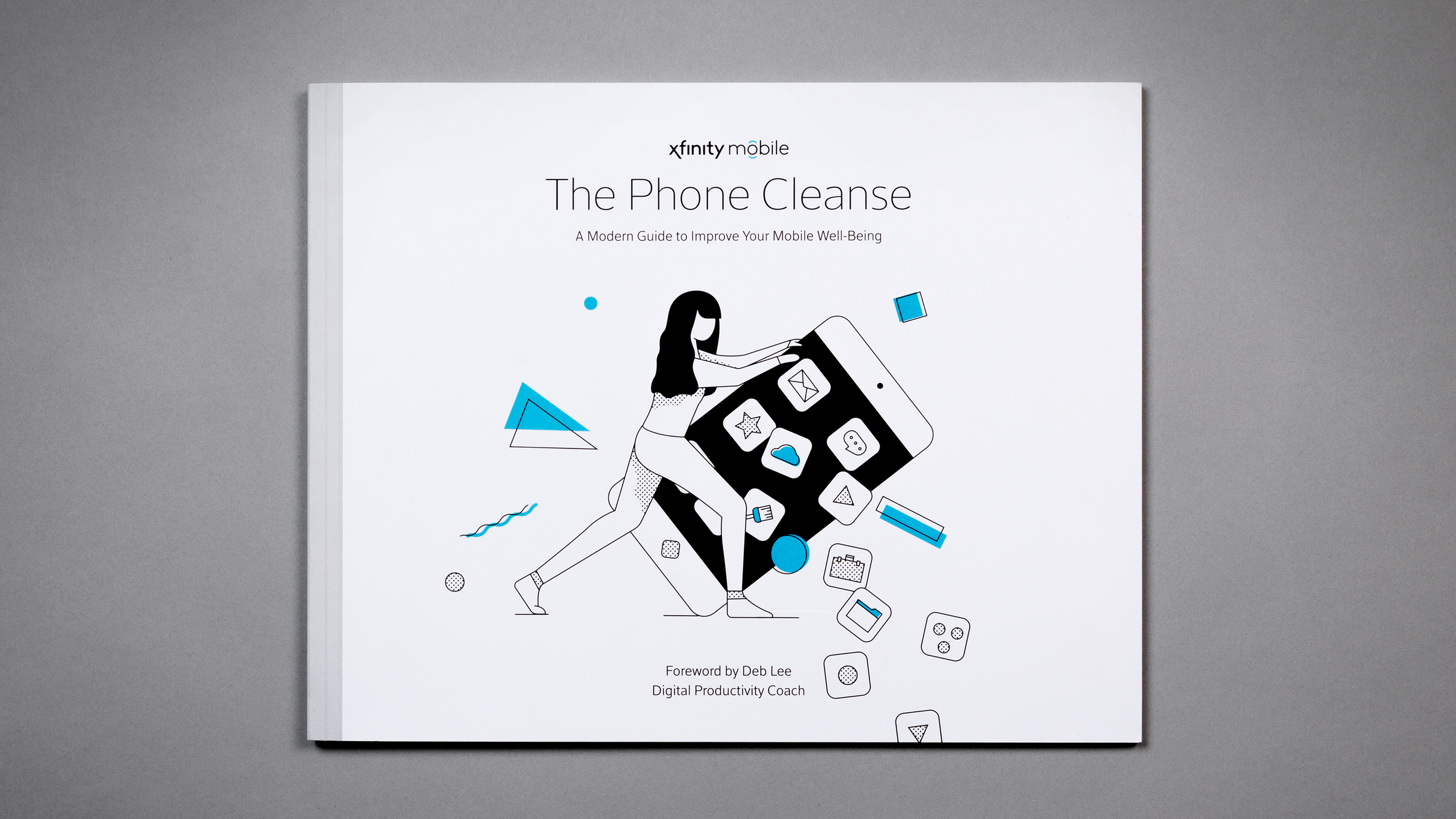 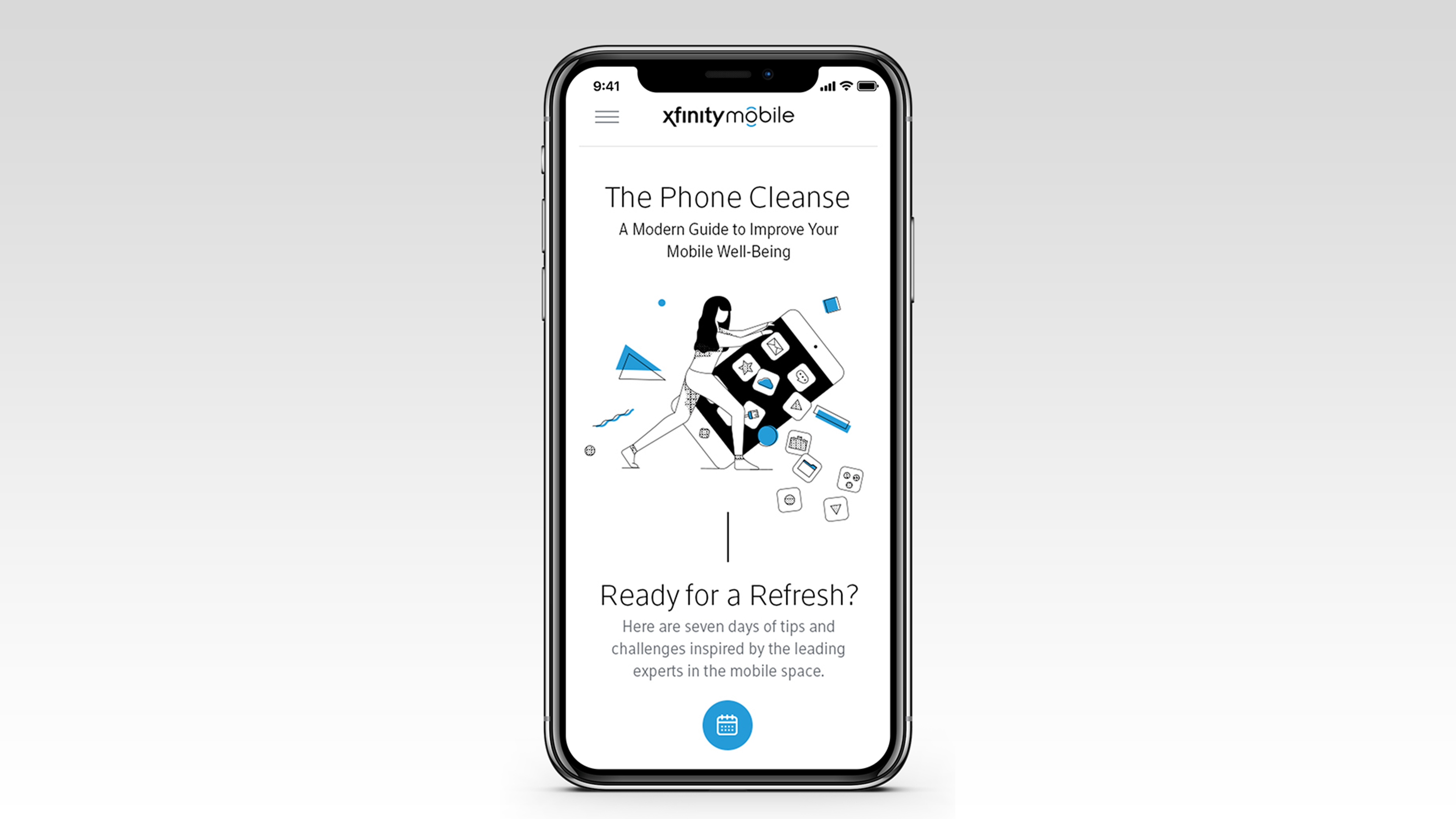 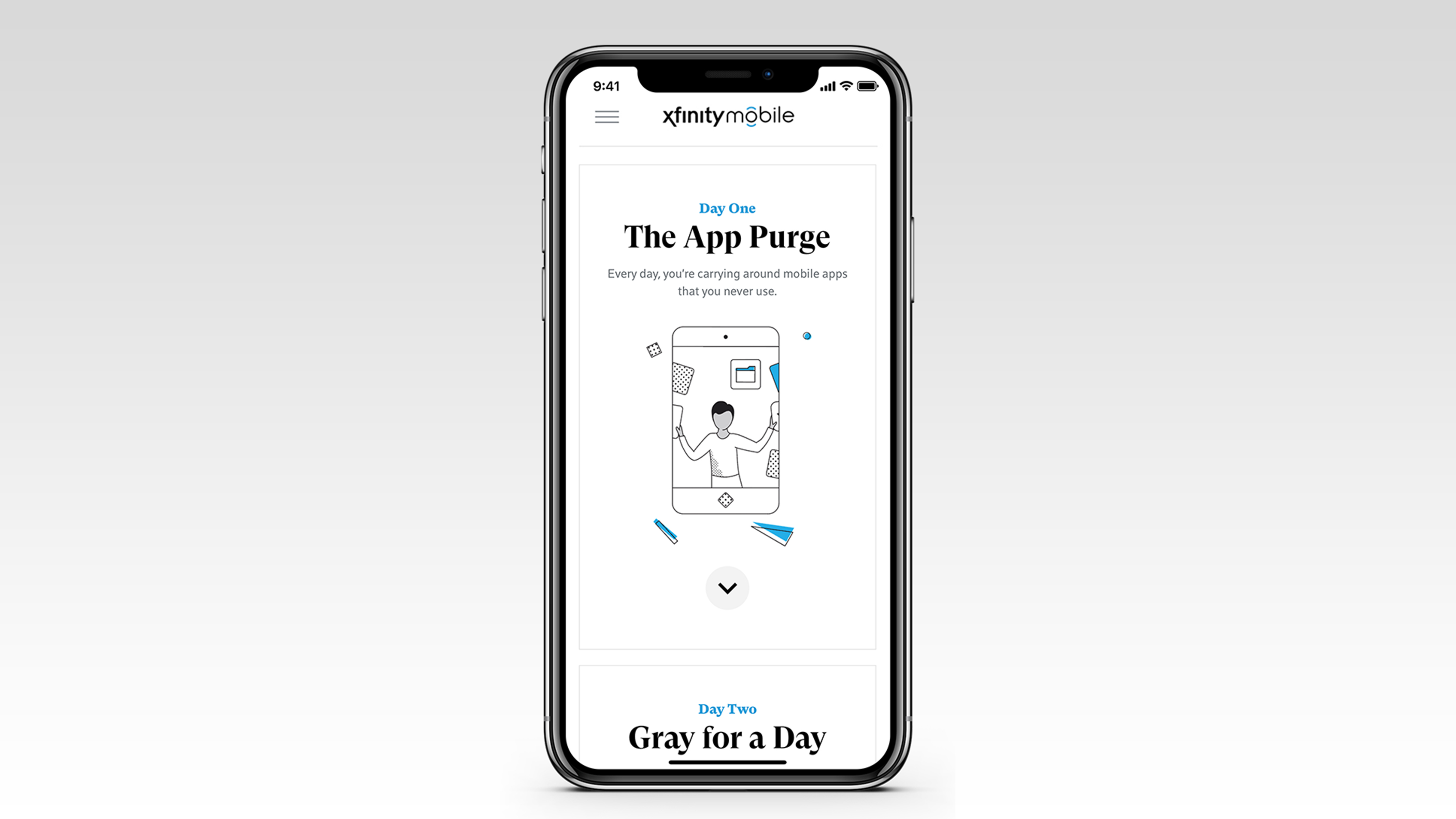 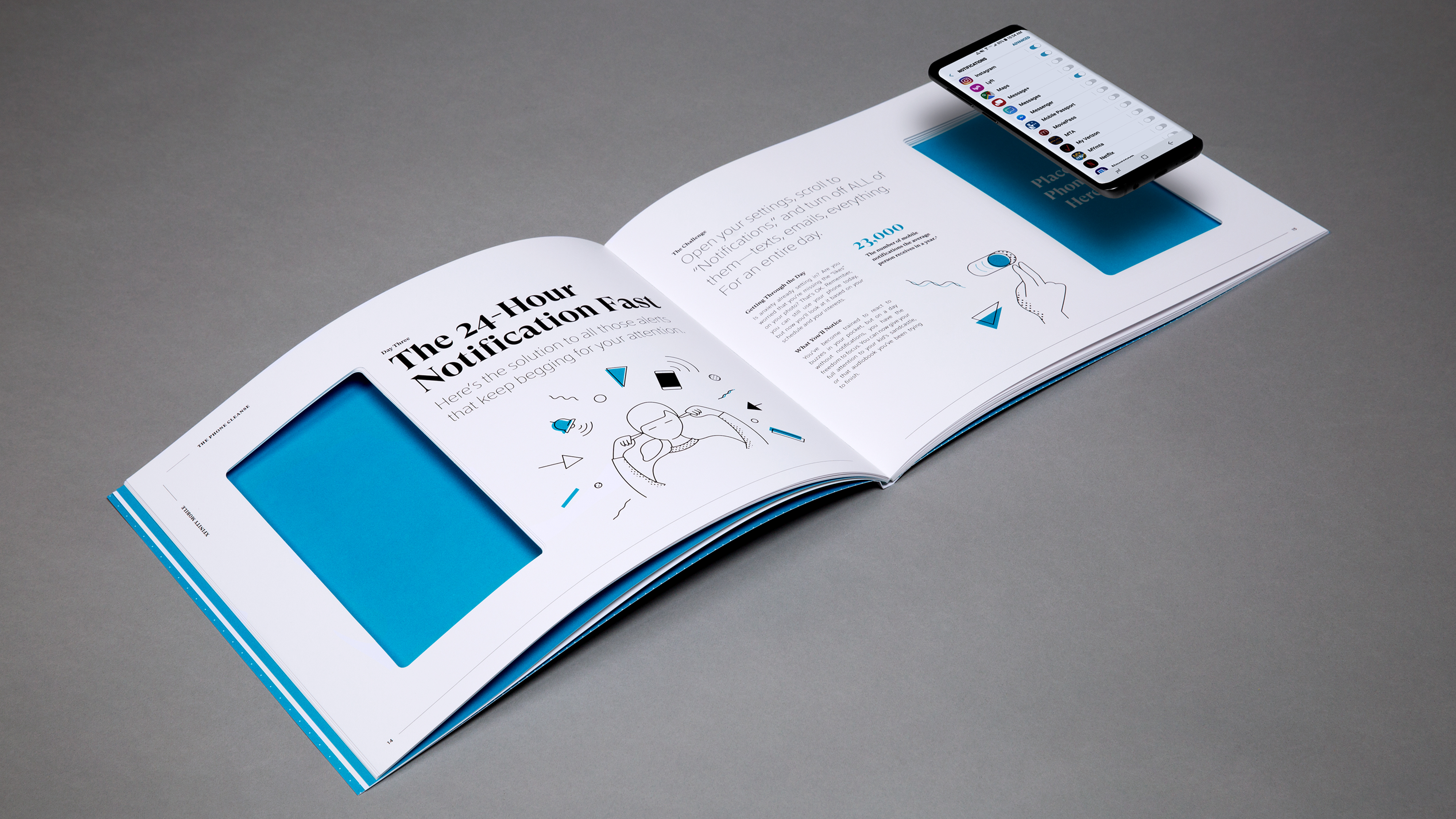 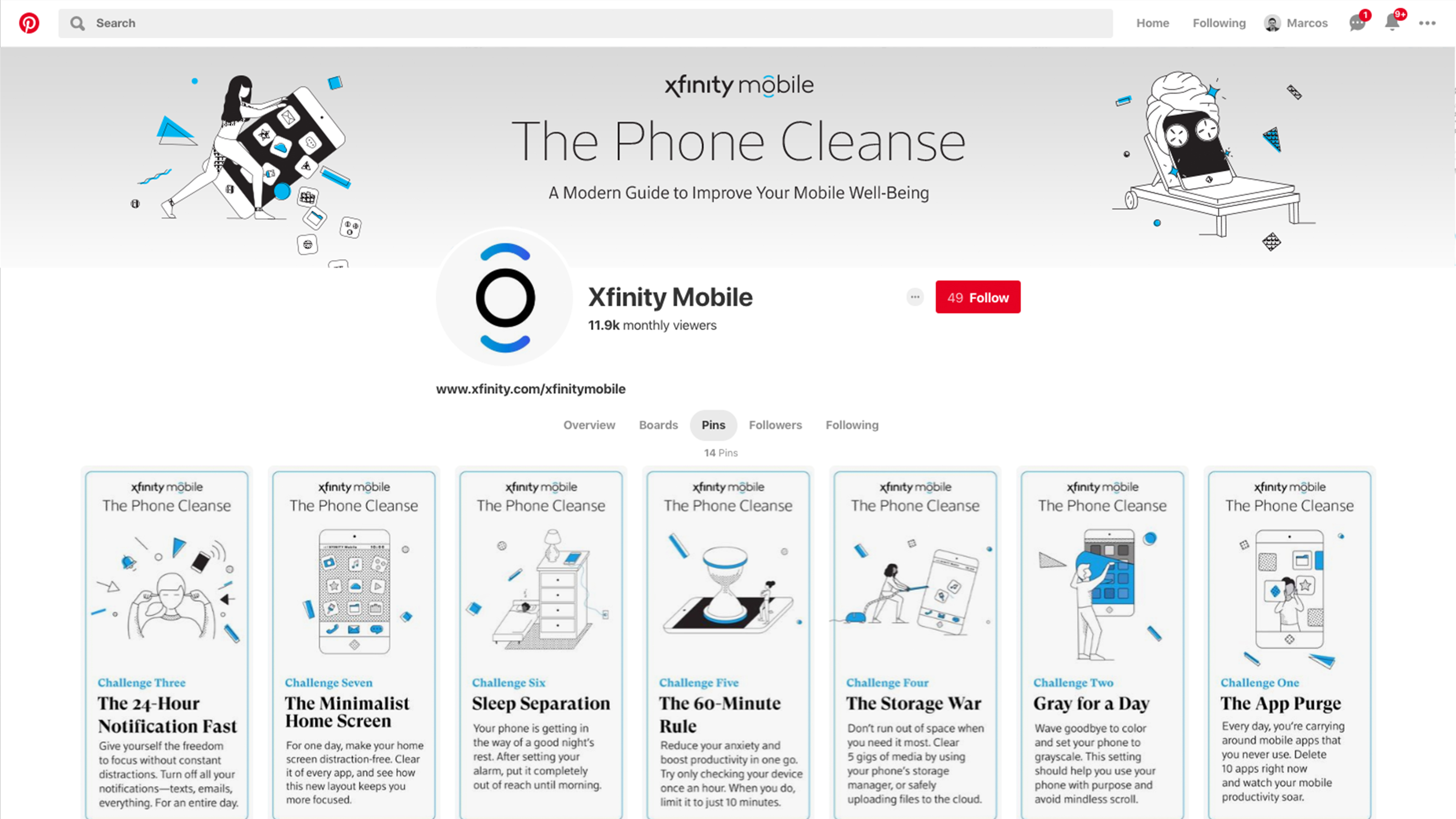