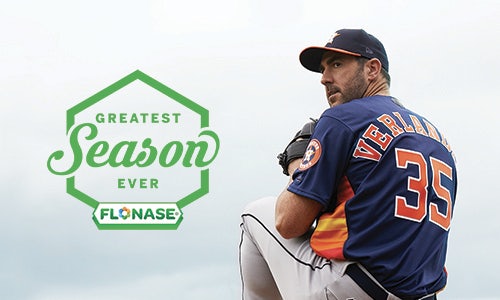 The Greatest Season Ever

Flonase set out to increase brand awareness and relevance amongst allergy sufferers in order to increase sales and category share.

The OTC allergy category is highly commoditized, with most treaters using OTC allergy pills as their first-line of treatment. But most pills don't treat nasal congestion, Flonase does. It's a nasal spray that offers more complete relief than most pills.

So, not only did Flonase need to make pill users aware that Flonase relieves more than pills, but also convince them to change their current behavior and "make the switch" from pills to Flonase as their first-line of treatment in the Spring season.

We set out to build strong emotional bonds with consumers through engaging and inspiring communications, so that Flonase would be recognized as the preferred choice for allergy sufferers.

Our sales objective was to increase household penetration from 5% to 5.5%, and our engagement KPIs were 20k+ social engagements, 2M+ video views, and 1B overall campaign impressions.

Flonase had to create relevance when it mattered most to really capture the targets attention. Enter, baseball.

When baseball begins, we celebrate more than just the sport – we also celebrate the arrival of spring. And that means the start of allergy season…as search and conversation trends showed an evident correlation between the start of baseball season and the rise of allergy incidence.

Flonase saw a historic and timely chance to help baseball fans overcome their allergy symptoms so they could have the Greatest Season Ever: 2018 was the first true Opening Day in 50 years, when all 30 MLB teams played on the same day.

Given the allergy triggers on a baseball field – grass, dust, and pollen – the time and place were right. Flonase tapped Houston Astros' Justin Verlander, star pitcher of the 2017 World Series champs – and a lifelong allergy sufferer and devoted Flonase user. We showed how Justin got to the top of his game: support and encouragement from his dad; long hours spent practicing; and ensuring he remains focused out on the field – without the distraction of allergy symptoms.

On Opening Day we surged media with high-impact takeovers on Twitter, YouTube and The Weather Channel, garnering maximum visibility and resonance for allergy suffering baseball fans. Content was tailored to communicate that Opening Day marks the start of baseball, and allergy season, encouraging consumers to have the "Greatest Season Ever", courtesy of Flonase.

A mobile focused campaign was ideal for Opening Day since according to eMarketer in 2017, 70% of US adults use a mobile device while watching TV. And as live sporting events are the last bastion of linear television in a digital era, using another device while watching sports is virtually universal (96% report doing so via GlobalWebIndex Q2 2017 — baseball's historic Opening Day was ripe for mobile attention.)

For the high-impact takeovers, YouTube was an obvious choice, with over 60% of visitors engaging with the homepage at least once, the Masthead placement was prime for intercepting mobile site visitors.

Seventy-eight percent of Twitter users are interested in baseball, +30% more likely to be interested in baseball than non-Twitter users. We secured the Twitter First View Video placement, guaranteeing that we reached every person on the platform (up to 3x) on Opening Day, knowing there would be significantly higher traffic this year with simultaneous Opening Day games in all 30 MLB markets.

We partnered with The IBM/Weather Company's allergy tracker app, providing real-time, geo-targeted allergy data around stadiums in the 10 worst allergy cities. Knowing game-goers plan their outings in advance, we sponsored a countdown to Baseball season within the app in the days leading up to Opening Day, reminding allergy sufferers to be prepared with Flonase.

The Greatest Season Ever was successful, effectively breaking through a cluttered category by leveraging marquee talent and driving emotional resonance through storytelling — leading to heightened earned coverage, consumer attention, and business results that outpaced the category.

Video for The Greatest Season Ever 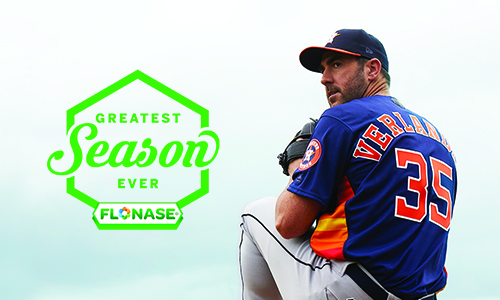