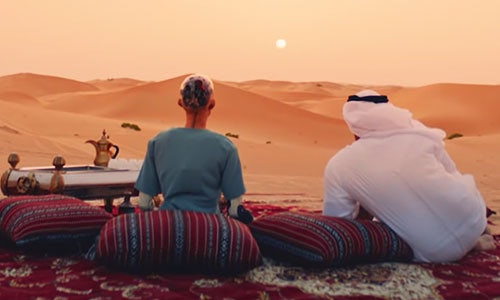 As the national carrier of the UAE, Etihad Airways has a goal to bring people from around the world to its homeland, Abu Dhabi. With so much to see and do in the Emirates, it was essential to show Abu Dhabi in a different light, create stand out. A short film taking you on the journey needed to be insightful and exciting and achieve the following objectives:

The very first step of finding the right influencer was to establish who to work. To be seen, to stand out from the masses of fashionistas, lifestyle gurus and #OOTD travellers. We needed someone with unexpected global appeal, that wouldn't distract too much from Abu Dhabi's rich heritage, Emirati traditions, and unique mix of offering to all tourists.

Through our influencer identification methodology, we landed on Sophia the Robot as the ideal candidate. Already trending across social media platforms, from an interview with Will Smith to global conferences, Sophie the Robot was definitely a bold choice.

An AI-powered robot, famous for speaking at the UN and interviewing celebrities and world leaders alike, Sophia was named the United Nations Development Programme's first ever Innovation Champion for Asia and the Pacific.

Furthermore, she offered a unique way in which we could reach one of our target markets; after all, she is the first robot in the world to have a nationality, after being granted citizenship by the Kingdom of Saudi Arabia. What better candidate to highlight Abu Dhabi whilst showing our interest in innovation?

Sophia checked off many boxes that we required – she was a Saudi citizen (something that would appeal to our largest KSA market), was a global phenomenon (a UN ambassador with a significant social media following), and was someone who could express emotion in the truest sense (Sophia is the world's most humanoid robot).

In order to create foundations for a loyal relationship that offers a true value exchange between both Sophia and Etihad, we followed our 3 success facts:

In an effort to further humanize the campaign and make Sophia more relatable to our audiences, we invited Khalid Al Ameri, a UAE celebrity influencer, to play the comedic foil to Sophia's "straight man", and to complement her pragmatic demeanour.

Khalid's influence in the region is unique; he appeals to Emiratis as he plays a representative to their country, but he communicates in English, and is a bit of an online tour guide to those seeking to learn more about the people and traditions of this region. His online following is a testament to the wide range of demographics he appeals to.

Khalid joined Sophia on on her first flight in to Abu Dhabi for an added appeal to the UAE audience. We created her an opportunity to experience the whole of Abu Dhabi in a fun and light-hearted way, as he chased her from location to location.

Working with our partners in Abu Dhabi, we created story that highlighted the breadth of offer to tourists, making it an option for a travel destination and/or stopover. The locations included art, family entertainment, culture and adventure all used to illustrate the emotion in Sophia the Robot/Khalid through comedy.

The video quickly gained high interest amongst our followers, resulting in 18M REACH, 6.8M views (triple the average performance of our videos) and a 30% increase in queries about Abu Dhabi across all Etihad social media channels. In addition, 50% of the weeks conversations on our social channels were in regards to Sophia and her experiences.

Our partner Abu Dhabi entities worked together for the very first time to push one video that would bring light to everything that the city had to offer. The posts by Emirates Palace, Louvre Abu Dhabi, Yas Waterworld, Yas Island, Yas Marina Circuit and Ferrari World generated more than 1.8 million impressions.

2 weeks after the initial launch we created another teaser video to link to the short film, this is still our best performing Instagram story with 220k views. 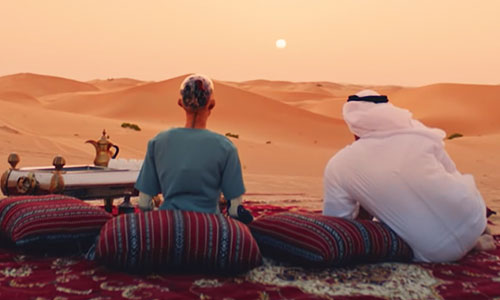