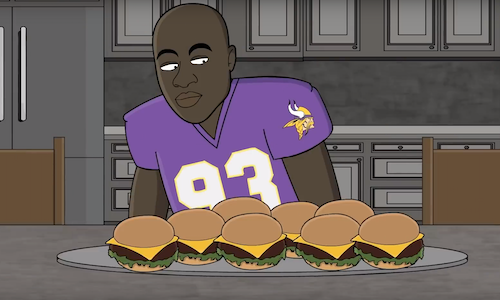 A football team strives to tell its best stories from the gridiron, often sagas of great determination, adversity and the relentless pursuit of victory. However, take a step back and you'll realize that some of the Minnesota Vikings finest narratives are the entirely offbeat, off-the-field anecdotes which largely have gone untold.

"SkoLOL" was a custom animated video series developed after unearthing some of the funniest moments in Vikings lore. It was thoughtfully created via a hybrid of animation/live-action storytelling from, who else, the players themselves.

"SkoLOL came out of a genesis of needing to find content that is not a serious football piece or a serious community piece. We needed to explore that vast world that exists in between those themes. As the internal production team, we get to hear our current and former players tell "off the cuff" stories all the time. The stories are always authentic, and it's the type of anecdote you typically don't get to hear on-air. When we let the players tell their own stories, the results were more detailed than if we interviewed them and asked specific questions." -GH Ridpath

We created "SkoLOL" as a segment of Vikings Connected, an existing show that finds ways to connect fans to the franchise. Each of the five episodes in "SkoLOL's" pilot season featured some of the most recognizable names in Vikings history: Hall of Famers Randy Moss and John Randle, former fan favorite Jared Allen, linebackers Chad Greenway and Ben Leber, and Pro Bowl defensive end Everson Griffen all made an appearance.

Moss' anecdote about his rookie season kicked off "SkoLOL" and received plenty of love and attention from fans. Randle reminisced about methods he used to increase his weight, and Leber and Greenway spun tales of rooming together in the early days of Vikings Training Camp.

Throughout each episode, the editors switched techniques between the live storytelling and animation reenactments of the scenes they described. The final product was generally 40-percent animation, 60-percent live video. For the animation on "SkoLOL," the Vikings worked again with talented artist Glenn Gracia, who the team previously partnered with during the 2017 season for the Vikings Connected holiday show.

"We worked with the insanely talented Glenn Gracia (our animator) on another project for our show Vikings Connected the previous year. After our first collaboration, a light bulb clicked that animation would be the best way to bring out these stories. We're always trying to push the boundaries here at the Vikings, and creating a full fledged animation piece was a big and risky undertaking. Football can be a serious topic of discussion, but sometimes you just have to laugh at the absurdity of sports and the players who live it every day." -GH Ridpath

23,794 total views came from the Vikings website and mobile app.

Outside of this series being originally aired on local television networks, the total number views for the digital content series was 954,060.