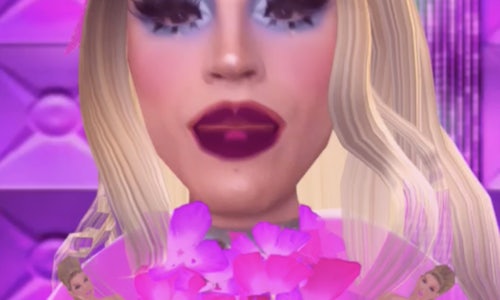 Following the now infamous exit of RuPaul's Drag Race Season 10 contestant Vanessa Vanjie Matteo, "Miss Vaaanjie!" was not only the catchphrase of the season, but a viral sensation. To capitalize on the iconic moment, we collaborated with our internal development team to create a Miss Vanjie filter for Snapchat and Facebook. The filter transported fans directly to the main stage as Miss Vanjie herself. It functioned in both selfie mode and on the front-facing camera, allowing users to "Vanjie" themselves and their friends.

Our strategy was two-pronged: (1) leverage the consistently engaged, die-hard Drag Race audience by launching the filter on both Snapchat and Facebook platforms during the Season 10 Reunion episode; (2) target the larger queer fan base that were aware of the Vanjie phenomenon by launching during LGBTQ Pride Month. We did this by featuring the Snapcode in an on-air bumper during the Reunion episode and also creating "Vanjie Fans" featuring the Snapcode that were passed around during the NYC Pride Parade. Social promotion also played a significant role in the project's success, with "Best of Vanjie" clips and direct linking to the filters from Twitter, Instagram and Facebook driving user engagement.