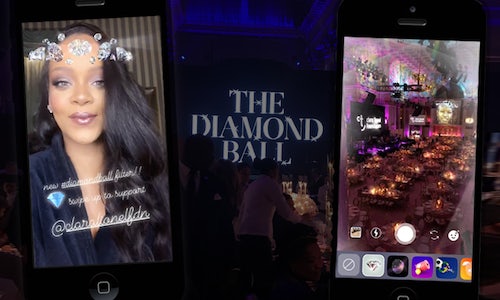 To raise awareness for Rihanna's Clara Lionel Foundation (CLF) around their 4th Annual Diamond Ball Gala, Roc Nation partnered with Instagram to create a custom "Diamond Ball" themed augmented reality (AR) filter within the Instagram app. On September 13, 2018, while getting ready behind the scenes on the day of the Ball, Rihanna launched the filter on her profile with an Instagram story to encourage fans to support CLF. Any of the 60M+ fans following Rihanna's profile (@badgalriri) could try on the front-facing floating glittery crown (solo AND with one other person) or make the world around them shine bright like a diamond with the rear-facing camera view. From Rihanna's Instagram story, fans could also swipe up to donate through the official Diamond Ball Facebook fundraiser. Anyone who viewed an Instagram story featuring the filter also had access to try it on. This achieved our objectives of engaging fans with a fun and interactive way to be a part of the special night and increasing awareness and funds for CLF.

The Clara Lionel Foundation, which was founded by Rihanna in 2012 in honor of her grandparents Clara and Lionel Braithwaite, is a nonprofit that supports education and healthcare programs in impoverished communities around the world as well as emergency response programs. The Diamond Ball is an invite-only, star-studded, black tie event held annually to raise funds for CLF's projects. With the event being celebrity-facing and closed off to the public, the challenge we faced was finding a way to make it more inclusive so fans around the world could take part in the celebration and reach a wider, younger audience beyond that of the typical fashion and entertainment press coverage that only have access to report outside from the red carpet. We also needed the call-to-action to be simple, highly accessible, organic and personal to anyone. Additionally, our budget was extremely limited because it was to support the non-profit cause.

We explored everything from VR experiences to separate AR apps, but partnering with Instagram was the best solution to our unique problems and achieving our goals. It was the first non-profit related AR face filter launched within the Instagram platform, and it allowed us to tap into Rihanna's massive following in a place they were already actively engaged in daily.

Working closely with Instagram, we created a filter that captured the essence of the Diamond Ball and allowed fans to create and share their own content with friends, furthering the reach beyond Rihanna's own following. The front-facing filter of the floating, sparkly diamond crown worked on up to two people, allowing fans and one friend to experience it together in real life. It also had a rear-facing camera experience that projects a diamond lens and makes objects sparkle in the real world in front of you. To access it, fans following Rihanna (@badgalriri), the Clara Lionel Foundation (@claralionelfdn) and any of her brands (@fentybeauty, @savagexfenty, @fentyxpuma, @perfumesbyriri) on Instagram automatically had the filter loaded as an option in their Instagram stories. They could tap on the Diamond icon within the face filter tray to take photos or film videos with it. From there, any of their friends who viewed the story could also gain access by tapping on the "Diamond Ball by badgalriri - Try It" link that appeared on the upper left corner of every story, even if viewers weren't already following any of the previously mentioned accounts.

Additionally, we were able to utilize the "swipe up" feature on Instagram stories to directly drive fans to donate to CLF.

The filter garnered millions of impressions within the first 24 hours. It was a hit with fans across the globe, and other celebrities such as Chrissy Teigen, John Legend, Madonna and more were seen using the filter in their Instagram stories expanding the reach far beyond what we could've anticipated.

It achieved our main objective of increasing awareness of the Diamond Ball and the Clara Lionel Foundation, and gave fans a fun and easy way to play a big role in celebrating the Diamond Ball with Rihanna in the most organic way possible.

Additionally, the Facebook fundraiser that fans were driven to from Rihanna's Instagram story raised close to $30K in less than a week. 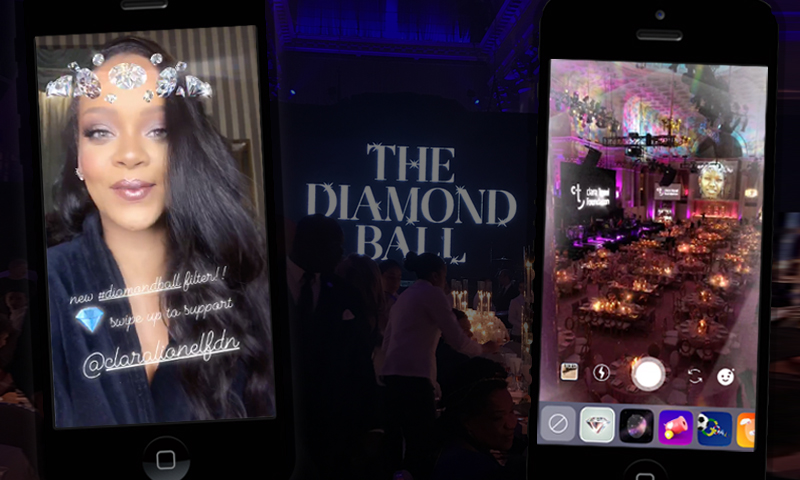