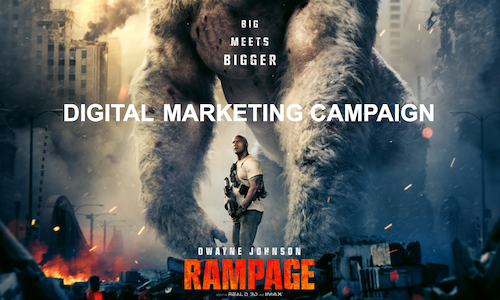 Warner Bros. Pictures partnered with various creative partners to create an innovative and colossal BIG MEETS BIGGER 360 digital marketing campaign for the hit movie RAMPAGE. Our goal was to mobilize the enormous fandom of Dwayne Johnson, highlight the scope and scale of the creatures and market the movie as the must-see popcorn flick of 2018. The spectacular visual effects and the heart-pounding action of the film allowed for engaging social content that put fans in the middle of the mayhem. The result was a worldwide success that made audiences roar with anticipation and approval.

Supporting the campaign was DWAYNE himself, who traveled the world hosting press events, making surprise appearances at fan screenings and even launching his very first Instagram Live as a way to connect to his loyal fanbase of millions,

Dwayne co-hosted HQ Trivia to deliver the largest cash prize in the history of the game and to also become their first ever movie star live co-host.

We developed a one of a kind custom augmented reality app that allowed fans to put the creatures into their everyday environments. Dwayne made this a truly global activation by kicking off the BIG MEETS BIGGER global contest inviting fans to submit their own videos for a chance to win a trip to the premiere and meet the big guy himself.

An epic virtual reality experience was created allowing fans to become the monsters and destroy the cities from a first person POV.

We invited influencers from across the globe to visit the RAMPAGE set and report to their fans how ridiculously epic the film was going to be and we launched a series of interactive games to bring the beloved franchise back to its playable roots. We even partnered with Spotify for a branded "Beast Mode" music takeover.

Finally, we partnered with Facebook to be one of the first to live-stream the world premiere cross-promotionally with multiple partner and talent pages expanding the global reach.

The result was a worldwide success that made audiences roar with anticipation and approval. Rampage was the #1 movie opening weekend and a massive box office hit, amassing over $420 million dollars worldwide. This digital campaign allowed audiences to be fully immersed in a two way conversation with Dwayne as well as the creatures. 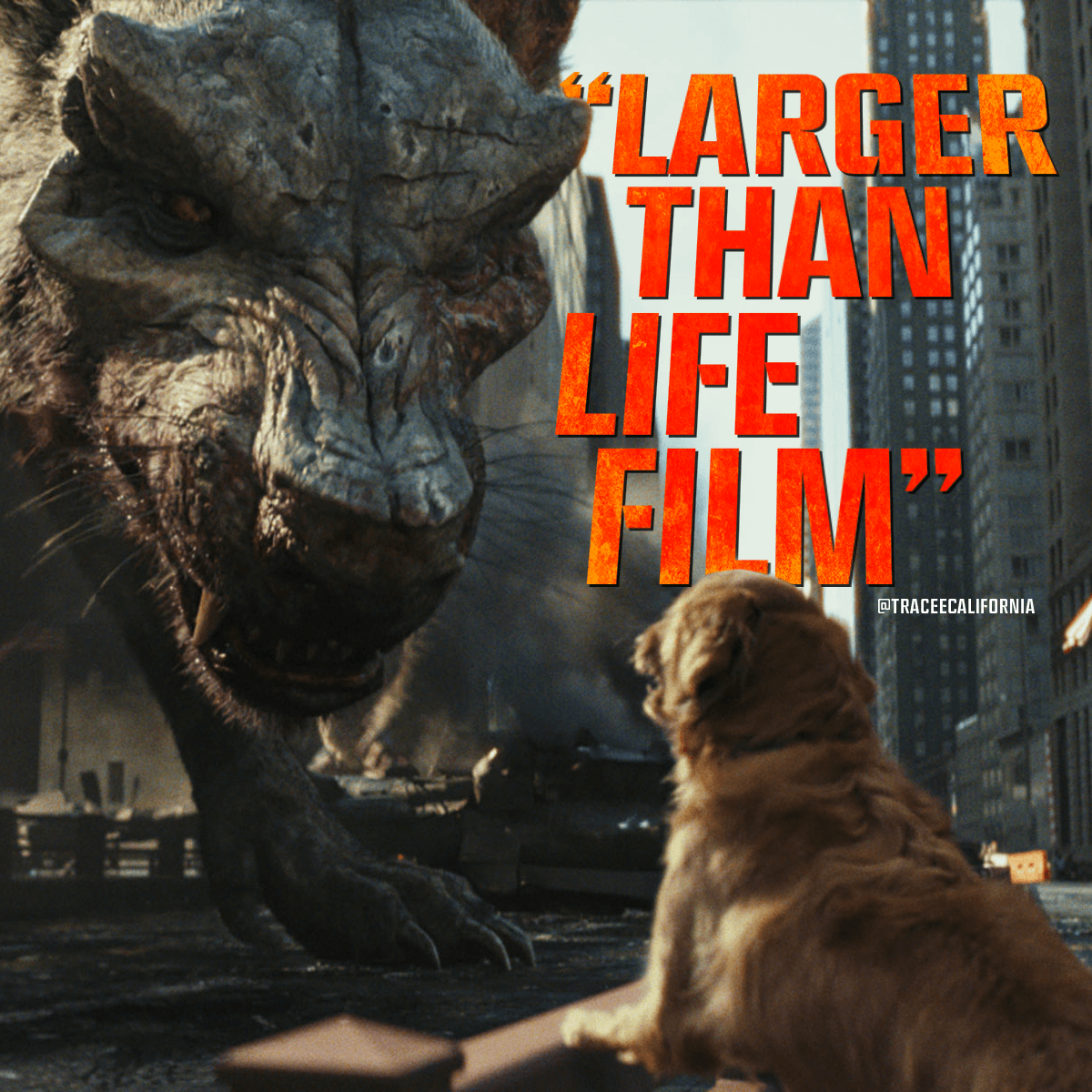 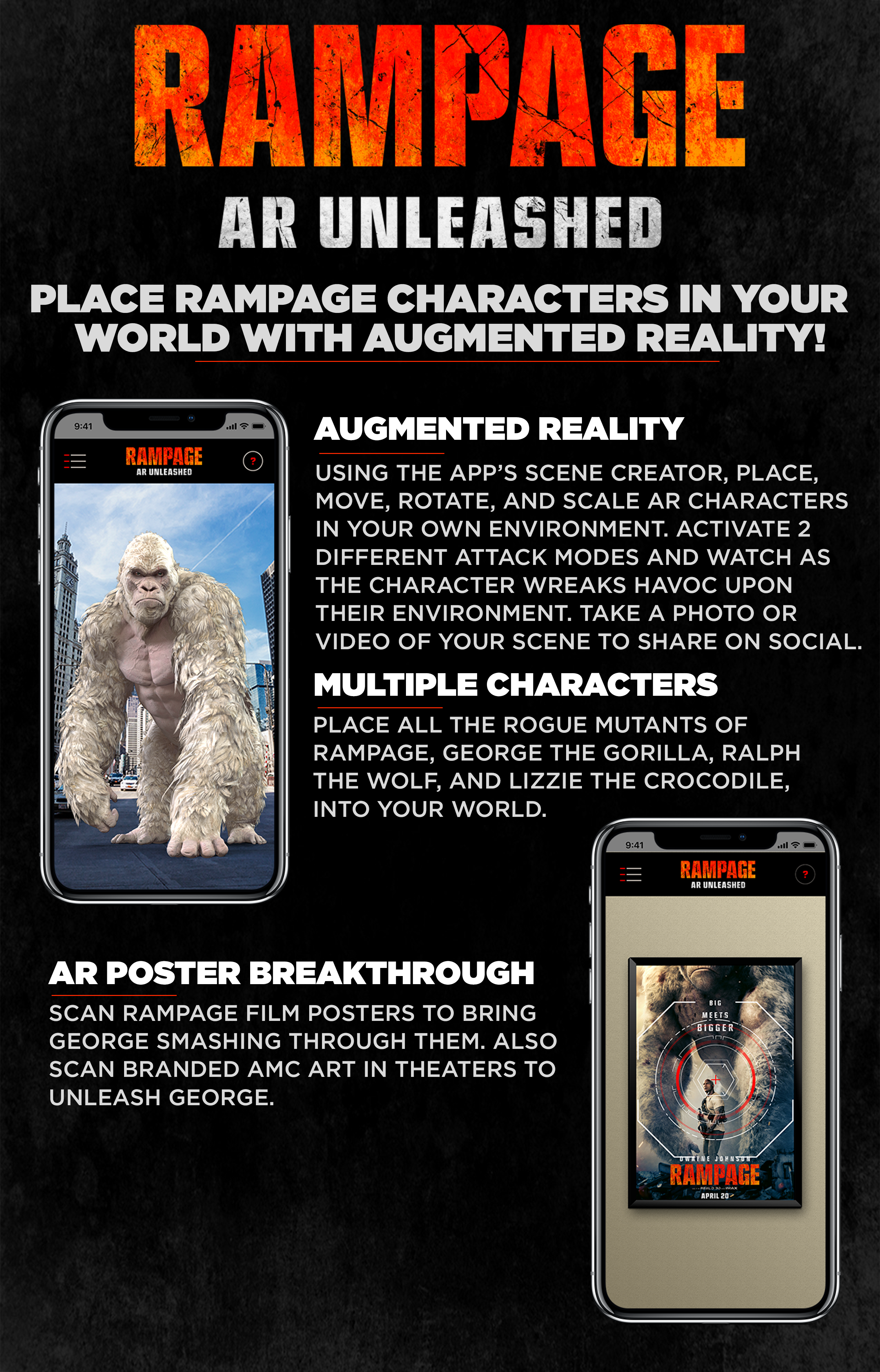 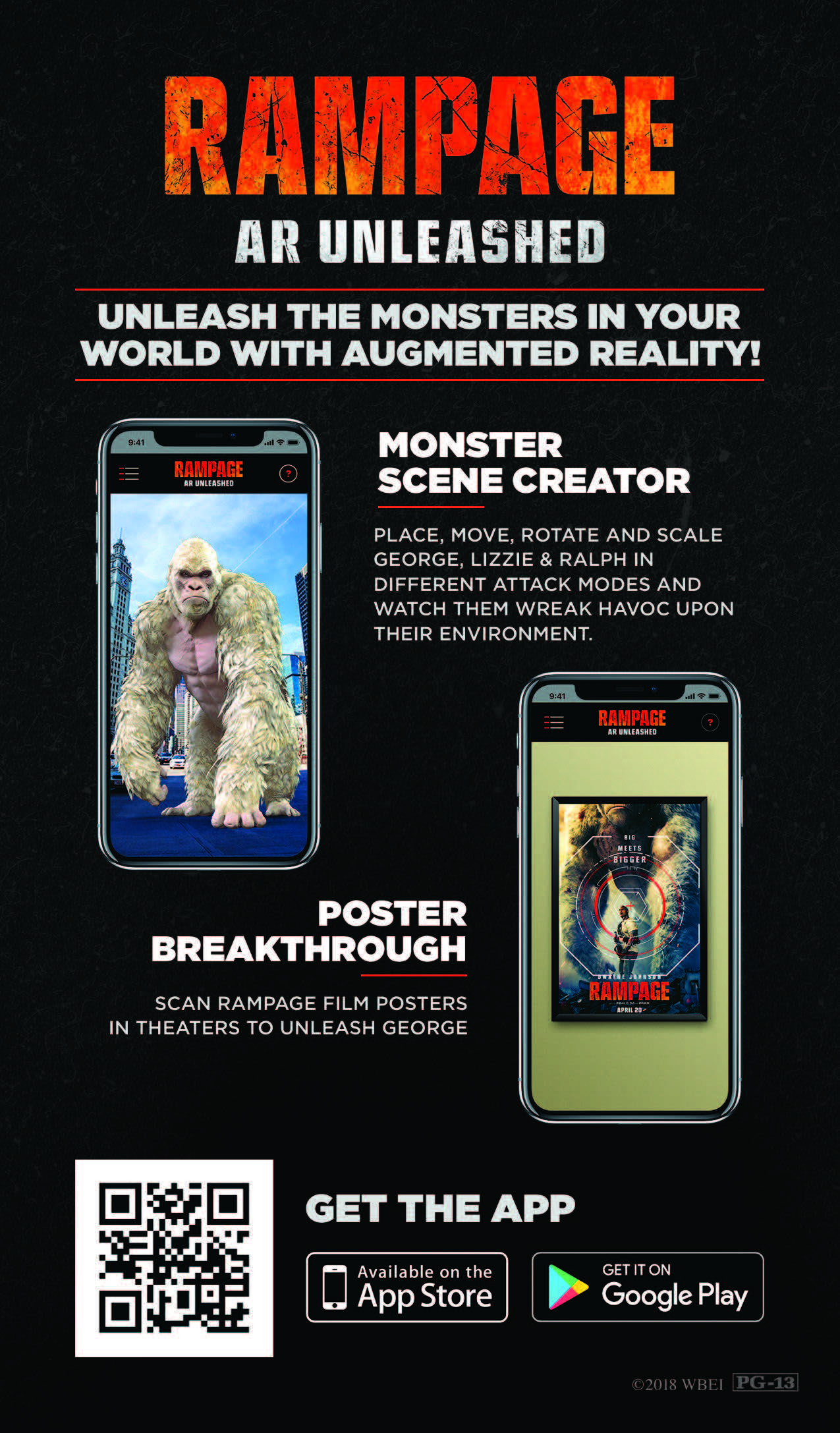 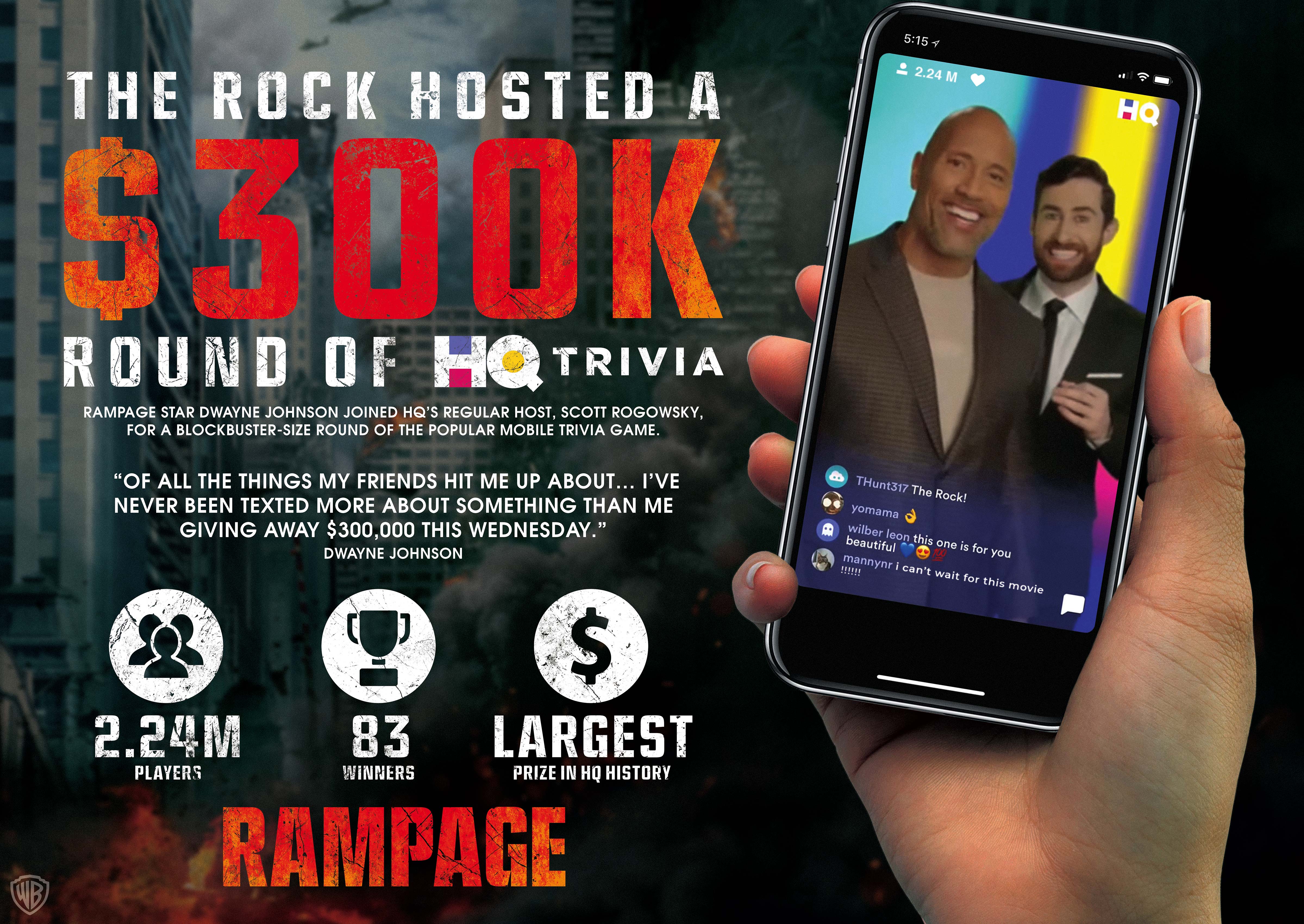 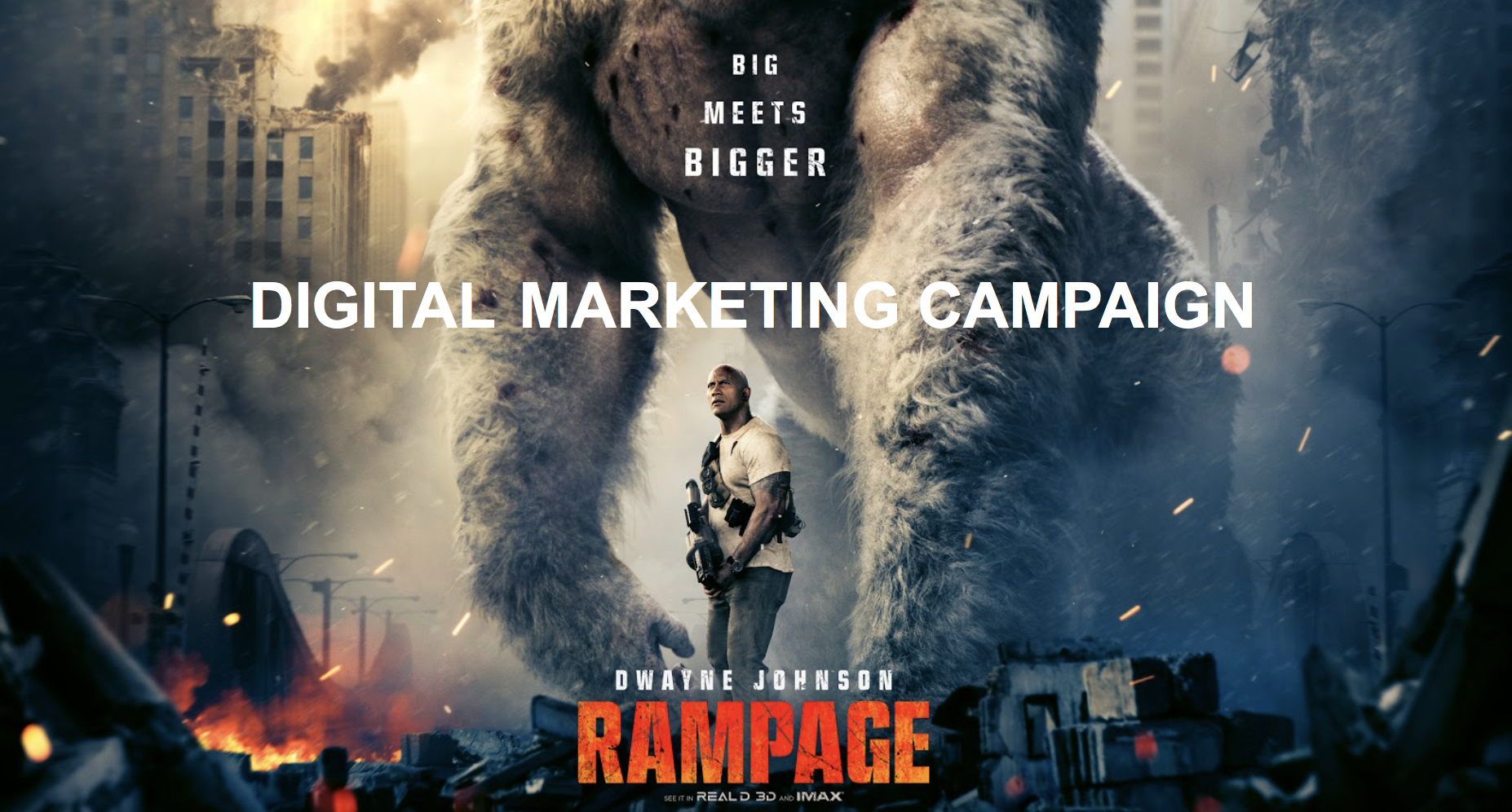