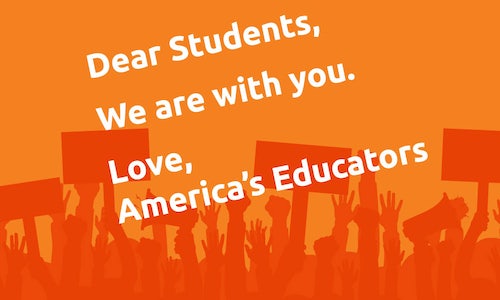 Protect Our Schools From Gun Violence

Some call this the gun violence generation. Many of today's youth have grown up in the shadow of mass shootings, including at Columbine High School and Sandy Hook Elementary. Active shooter drills are commonly practiced, starting in elementary school. And educators are increasingly expected to transform from nurturers to first responders at a moment's notice—having to react and decide the best ways to protect their their students based on the circumstances.

Yet after Valentine's Day 2018, it felt like our nation had turned a corner on the debate about gun violence. Fifteen students and two educators in Parkland, Florida, had just died in the largest mass shooting at a high school. Students across the country, not just in Parkland, had enough. They began speaking out in the media and organizing protests, such as walk outs and marches.

At the nation's largest union of educators, we knew that the voice of educators, who are on the frontlines of this issue, was key to enacting change on this topic.

The goals of our "Protect Our Schools" campaign were to:

As the nation's largest public-sector union comprised of 3 million current and former educators, we launched a multi-channel strategy to mobilize our members to demonstrate support for students speaking out and to call on Congress to enact meaningful legislation.

At the center of the campaign were the real-life stories from educators and students, talking about their own experiences and demonstrating their commitment to change.

Because the March for Our Lives was a student-led and organized event, we felt it important to lend our support. The week before the march, we launched an initiative that asked educators and parents to generate videos and social media posts thanking students for their action.

Our social media posts throughout the year were anchored by a series of three videos of educators and students who have survived different types of shootings talking about the need for gun reform and by the written Congressional testimony of language arts teacher Stacey Lippel, who shared her harrowing story of what happened the day she lost two students in the shooting at Marjory Stoneman Douglas High School.

We ran an email campaign to our 1 million activists to connect them with meaningful actions, such as writing Congress and hosting voter registration drives at high schools with the organization HeadCount.

Our officers, including NEA President Lily Eskelsen-García and Vice President Becky Pringle, would appear regularly in national media interviews, which could be clipped and shared on social media to demonstrate our vocal support in the media on the issue.

We revised and relaunched NEA's School Crisis Guide. The 80-page resource includes advice for talking to students about violent tragedies, as well as tips for preventing school violence. But it also has resources for a wide range of crises schools can face, from natural disasters to fatal car crashes involving students or staff. It even includes information for school communities who experience ongoing trauma in violent neighborhoods or environmental stressors.

We also realized that we couldn't act alone. We helped lead a coalition of educator groups dedicated to action, including the American Federation of Teachers and BadAss Teachers Association. As part of this coalition, NEA launched the ProtectOurSchools.com site, which initially supported a national day of action on the anniversary of the shooting in Columbine, and now provides resources for taking action on gun violence, including lesson plans, links to register to vote and host voter registration drives, and contacting Congress about legislation.

In October, NEA was a lead sponsor of the Student Gun Violence Summit. One hundred student representatives drafted and adopted the Bill of Rights for Safer Schools and Communities. The Bill of Rights provides a framework for how institutions, leaders, and policy makers across the country can address gun violence in a meaningful way. NEA President Lily Eskelsen García addressed the attendees on Saturday, and NEA Executive Committee member Robert Rodriguez moderated the adoption of the Bill of Rights process.

And throughout the year, our editorial team created a series of long-form online articles that were read by neaToday.org's 3.7 million unique visitors.

To channel educators' frustration, sadness, and anger into meaningful action, our efforts resulted in more than 100,000 letters sent to Congress demanding action on gun violence in 2018.

To demonstrate support for students calling for an end to gun violence, our "Thank You Students" user-generated content initiative received 300 submissions. Its hashtag was mentioned 3,800 times in the month of March, including 1,800 mentions on the day of the March for Our Lives. In conjunction with the march, we opened our headquarters to a poster-making party hosted by Rock the Vote and 200-person delegation marched from our national headquarters.

As a leader in the Protect Our Schools coalition, NEA helped organize the National Day of Action Against Gun Violence in Schools on the 19th anniversary of the school shooting at Columbine. Supporters self-organized more than 200 events in 105 cities that were appropriate to their communities. ProtectOurSchools.com was the day's virtual hub, including a map of events, a toolkit, and other resources.

We used the Student Gun Violence Summit as a social media moment two weeks before the 2018 midterm election. Our social media team shared key moments from the event, ensuring its outcomes did not go unnoticed.

NEA has demonstrated long-term the support of educators for the students demanding change, connected schools with resources they need to respond to gun violence, and created a national activist base of 100,000 educators and parents who are dedicated to finding an end to gun violence.

Video for Protect Our Schools From Gun Violence 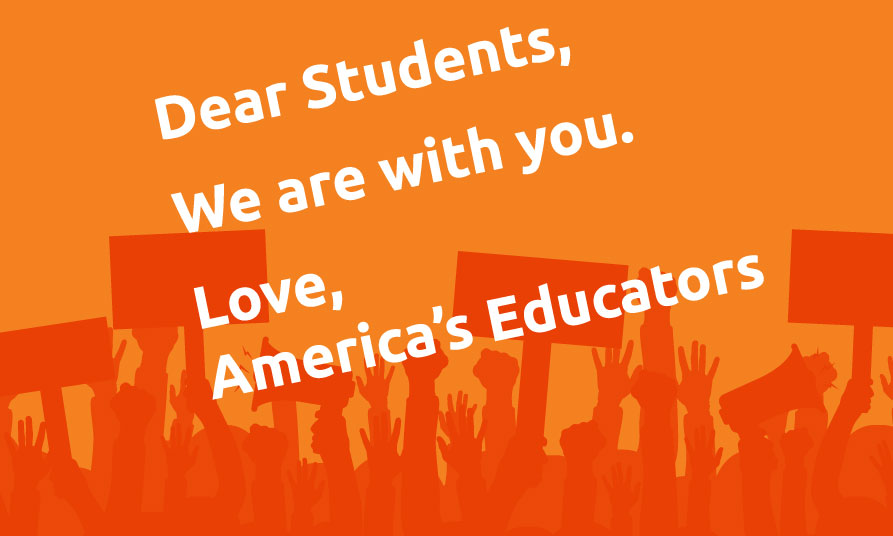 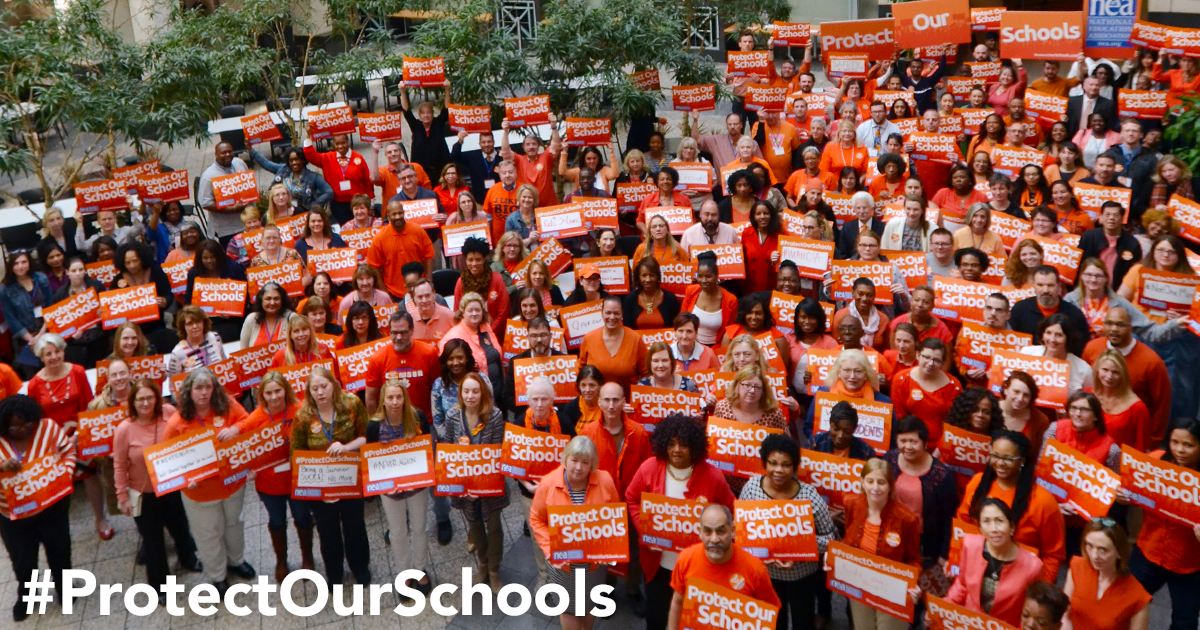 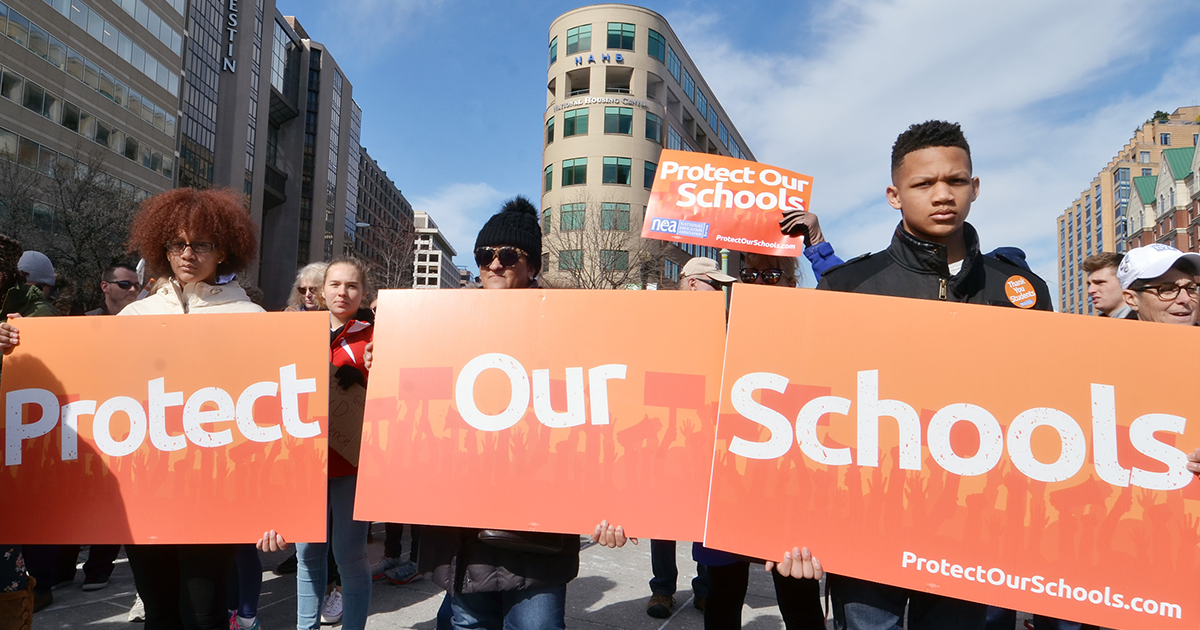 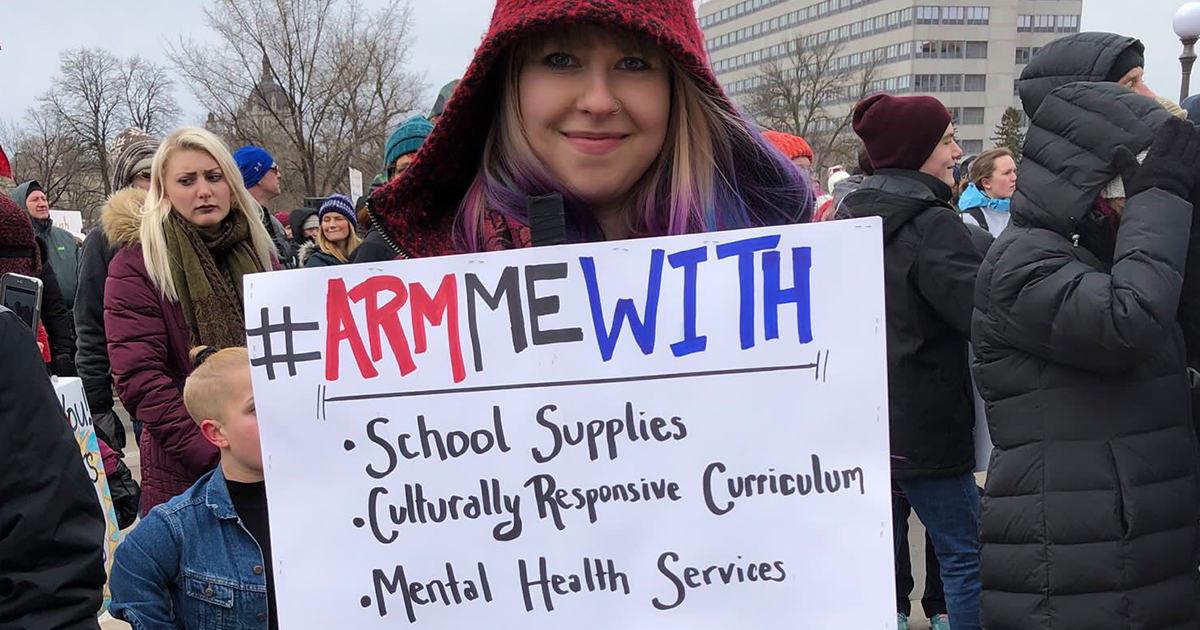 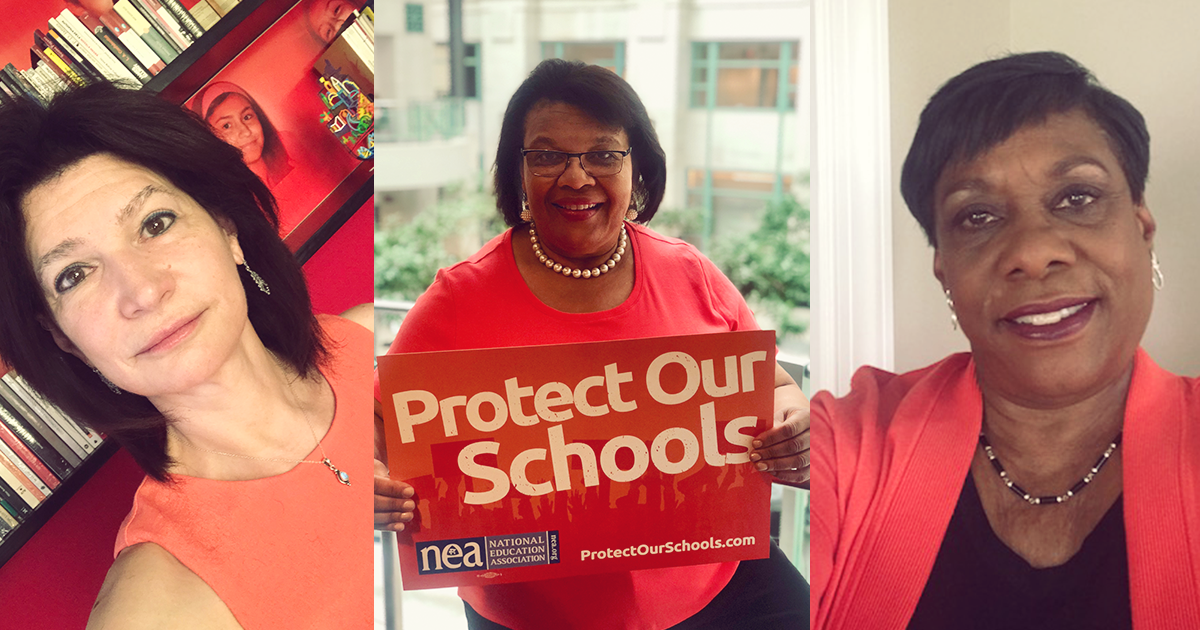