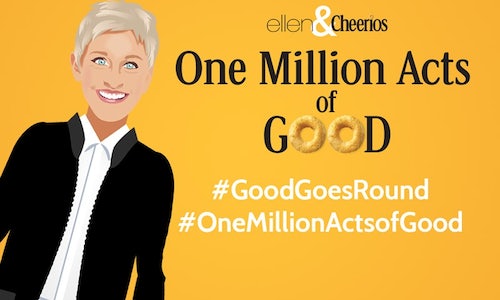 One Million Acts of Good

For over 75 years, Cheerios has been at the center of America's breakfast table, but the brand was losing relevance.

To reignite love for our brand and food, we launched a new platform idea: Good Goes Round. Starting with the product truth that Cheerios is packed with positive energy from mighty oats, the idea celebrates the virtuous cycle every bite sets in motion. When you eat good, you put good in the world, and make it go round.

After launching in mainstream media, we turned the idea into action - for a nation in need of it. Conversation had turned toxic in America and it was affecting people. 88% increase in cyberbullying, 70% of LGBT kids are harassed, and 59% of Americans believe it's the lowest point in history.

To turn around the mood and make goodness louder than negativity, Cheerios joined forces with America's cultural beacon of positive energy.

To spark good in the real world and make it spread, Cheerios and Ellen Degeneres created a powerful rallying cry - One Million Acts of Good.

We challenged people across America to do kind acts. From holding the door open for a stranger to flying disaster relief supplies to hurricane-struck areas of Puerto Rico -- no act was too big or too small! As the good spread, we amplified and celebrated it, showing how the simplest acts can flood the nation with goodness and create measurable change.

To breakthrough the negativity engulfing culture, we needed an audacious, almost unattainable goal like one million acts. Even Cheerios, the biggest cereal brand in America, couldn't do this alone. We needed an equally massive and like-minded partner to reignite the virtuous cycle of positive energy. There was only one: Ellen DeGeneres, the infinitely positive talk-show magnate turned human rights activist who has almost 245 million followers online and one of the highest rated TV shows.

Together, Cheerios and Ellen could meaningfully engage people from all walks of life and rally the country to spread positive energy.

Mobilizing One Million Acts of Good was going to be a herculean effort, so Cheerios and Ellen deeply integrated across their ecosystems to fire up every touchpoint in service of promoting the program.

We kicked off during Ellen's show, asking people to do a good act and share it via #OneMillionActsOfGood. To amplify, we featured Ellen on our box, which has more impressions than the Superbowl. Even U.S. retailers, like Walmart, joined the effort with bespoke initiatives.

Our joint rally led us to our goal in February 2018! To celebrate in a breakthrough way, we gave away $1 million to do-gooders on Ellen's birthday finale.

The #1 win: we surpassed the One Million Acts of Good finish line.

This wasn't just a pay-to-play but a passion program everyone rallied around. Ellen believed in the program so strongly that she included One Million Acts of Good in 22 episodes. Our joint communications reached 40.6 million adults and achieved 3x the impressions aimed for, garnering 389,835,997 impressions.

All partners experienced a positive impact. Ellen's TV show viewership was up +37% for the finale (vs. the average episode). Cheerios experienced 2x the positive social sentiment that translated to retailers selling 6MM incremental boxes of Cheerios during the campaign.

It shows that when you start with good, the Good Goes Round.

Video for One Million Acts of Good 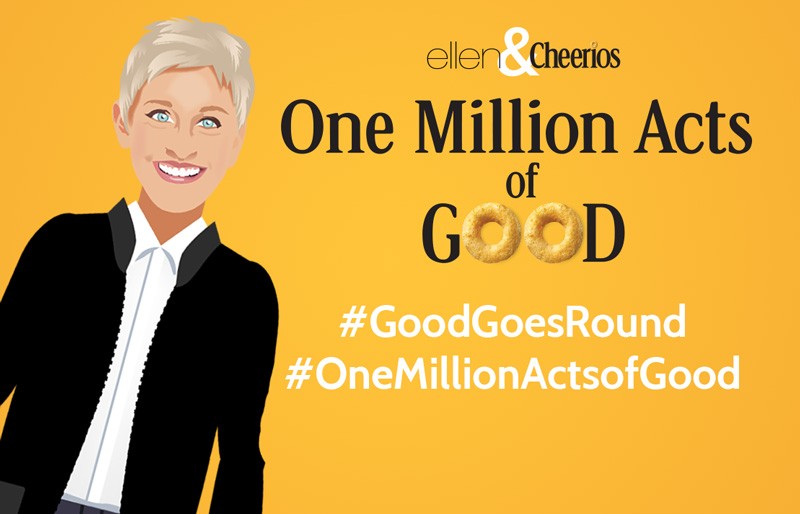