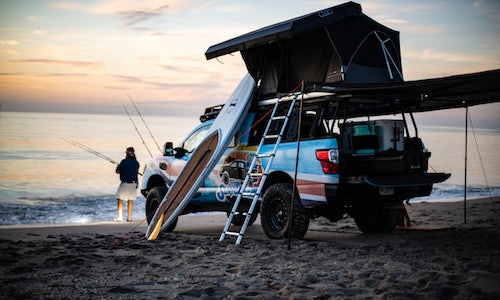 To spark new ideas and engage with new consumer audiences, in 2018 Nissan embarked on a series of outdoor lifestyle-themed project vehicle builds. The resulting distinctive vehicles embraced camping, skiing, barbequing, and adventure driving themes, all intended to connect the passion people feel for the outdoors with Nissan trucks and SUVs.

To celebrate summer, Nissan dropped the towel on its one-of-a-kind ultimate beach-inspired pickup truck – TITAN Surfcamp. This all-inclusive, fishing-inspired beach cruiser is loaded with modern beach toys for any fishing, surfing and summer adventure in the sand. Its exterior wrap is reminiscent of 1960s and 1970s surf culture with a retro color scheme based on the exterior paint of a 1967 Nissan Patrol and a Hot Wheels® 1971 Datsun Bluebird Wagon nicknamed "JNC Surf Patrol."

Nissan knew it had to promote this unique vehicle in an engaging and authentic way, especially to the target audience of fishing and beach enthusiasts. Historically, the truck market is dominated by the domestic brands, but as the new kid on the block, Nissan had a terrific opportunity to get creative with showcasing a special version of its pickup truck.

Nissan showed the TITAN Surfcamp to fishing, surfing and watersports enthusiasts where they were in real life: at fishing-focused trade shows and at a top-level professional female surfer competition. Additionally, we engaged with the public online with a Facebook Live unveiling through the Nissan Trucks brand subpage.

Nissan leveraged its brand partnerships in the fishing world to develop a launch plan around iCAST, the world's largest sportfishing trade show. It also used the fun and fresh world of women's surfing to promote Nissan trucks to a completely new audience. Throughout the campaign Nissan used the #TITANSurfcamp hashtag to track its impact across different social media sites.

Nissan asked professional fisherman and TV host, Carter Andrews, of "The Obsession of Carter Andrews" on the Outdoor Channel, to join them at Vero Beach, Florida, for a Facebook Live unveiling of the TITAN Surfcamp. Other select media members attended the unveiling as well. Nissan teased the public reveal of the vehicle through its Nissan Trucks Facebook and Instagram subpages, telling audiences to tune in to the Facebook page for a special live unveil featuring Carter. TITAN Surfcamp was parked right on the beach, allowing Facebook Live viewers to experience the sights and sounds of the surf before panning over to the pickup.

Nissan also partnered with influencers in the sportfishing world, like YouTube personality Gene Jensen of the Flukemaster YouTube channel. Gene posted his own video on his YouTube channel, introducing the Nissan brand to his audience.

After the Facebook Live unveiling, Project Surfcamp had its first public debut at the 2018 iCAST sportfishing trade show. There, sportfishing enthusiasts from around the world saw the TITAN Surfcamp in person.

From there, it traveled across the country to the Pacific coast and the Paul Mitchell Supergirl Surf Pro surfing competition in Oceanside, California. Nissan's Truck Instagram page posted live photos of the awesome truck and surfing competition action.

TITAN Surfcamp was a whopping success. According to PRIME Research, the TITAN Surfcamp story had a traditional media impact of over 5.5 million. Media coverage included hits in publications like the San Diego Union Tribune, The Sacramento Bee, SlashGear and CNET. BroBible's Douglas Charles called the TITAN Surfcamp, "literally a damn on-the-go beach house."

On social media the Facebook Live unveil had approximately 211,000 views and 188 reactions. The #TITANSurfcamp hashtag had approximately 876,000 impressions across social media channels. The conversational breakout was mostly focused on Twitter (57%) and Instagram (37%). Nissan's umbrella hashtag for its truck and SUV-focused brand pages, #TITANAdventure, garnered 119,600 impressions in July during the TITAN Surfcamp launch. Like #TITANSurfcamp, the mentions were overwhelmingly positive.

Gene "Flukemaster" Jensen posted a photo of the TITAN Surfcamp, generating over 4,000 likes and reaching his audience of over 137,000. Social sentiment was overwhelmingly positive and distinctly focused on the TITTAN Surfcamp reveal.

Facebook User: "Retro is so in – bring it Titan Surfcamp"

YouTube User: "Now that's the way to go on a fishing trip thanks as always for bringing us the good stuff " 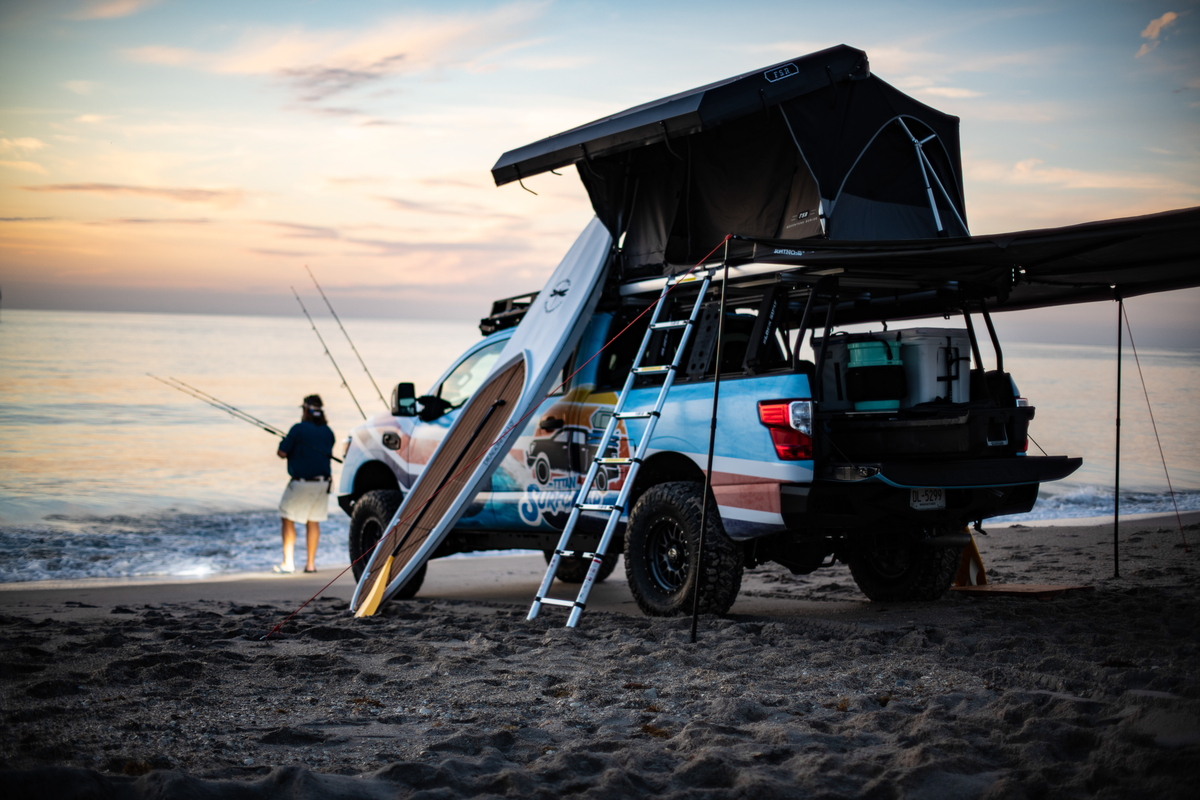