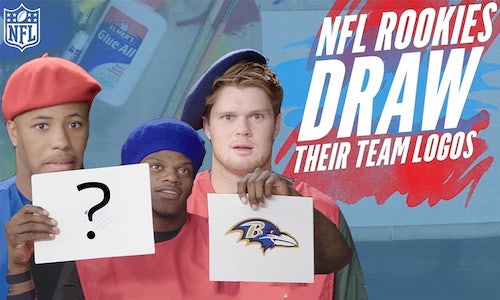 A main objective for the NFL is making sure that people get excited about the game of football. Inherent in that objective is creating excitement and interest in NFL players themselves. While everyone knows of the biggest stars, like Tom Brady and Drew Brees, we place a high value on growing the popularity of our new players, particularly the rookie class. These young men are the NFL's next big superstars and it is important for us to make sure our fans know their names, faces, and charismatic personalities as soon as possible.

Therefore, our goal was to make a viral piece that showed players personalities, made headlines at other media outlets, over-performed on our platforms, and got people talking about the 2018 rookie class.

In thinking about this execution, we knew that having fun with NFL rookies and giving them a break from the pressures of becoming NFL superstars was the best way to make our work, as well as their energy, pop on camera.

NFL players, particularly rookies, are accustomed to being in the spotlight. They are ceaselessly asked by the media about all facets of their game, often without much opportunity for comedy. Our strategy for this project was to stand out from the standard interviews by juxtaposing the immense gravity of being drafted to an NFL team with the shear absurdity and fun of playing with arts and crafts. These men have been training for their entire lives to be a member of an NFL team, and despite all of this work, the only thing they didn't prepare for was drawing (or even remembering) NFL team logos.

Another important factor in our strategy was that we didn't want to put pressure on the players to say or act particularly funny. We wanted a concept that would inherently produce something comedic simply through the ask itself. We knew that none of these athletes were artists, and seeing them out of their comfort zone and whatever work of art they created, would speak volumes to their personality and the humor of the piece.

Another aspect of our strategy was timing. We have opportunities to interview players before Draft, but it didn't make sense to capitalize on this opportunity until afterwards, and the next time all rookies were together was at the NFL Rookie Premiere. Once drafted, players are bombarded with their new team – but how closely are they paying attention? It was just enough time for them to think they know their new logo, but also realize how incredibly unfamiliar it is.

We were able to capitalize a two-day window with several of the 2018 Rookie Class in Los Angeles at which our players were given their objective on our set: draw your new team's official logo. They were given no help or clues of any kind, but had all the painting and art supplies they would need to complete their task. Better yet, these players came to our set with absolutely no knowledge of what they'd be asked to do. Most assumed we were going to put them through a series of standard questions about what it means to be in the NFL or what their hopes for their career might be. The surprise on their faces when we handed them a smock and a beret only made the video funnier and their reactions more genuine.

We made sure to have cameras rolling from the moment they sat down and put on their beret, through the moment they signed their final artwork. We had a setup that allowed for the standard face-on camera shot, an over-the-shoulder shot, and the important top-down shot that truly captured the art process. Our final product was a compilation of not only multiple angles, but multiple players, and we created a one minute version for Instagram and a longer version for Twitter and Facebook. This allowed us to share our video on all of our social channels in a format that best fit each platform.

We were thrilled to find out that we more than exceeded expectations. First, this content totally overperformed across NFL social platforms and NFL.com with a combined 5,270,985 views and a skyrocketing level of engagement.

The video also spread quickly across reddit, appearing on r/nfl, and a variety of subreddits.

More importantly, it got fans talking about the 2018 rookie class in a positive way that focused on their (screenshots below).

Finally, the most unexpected result: A Bills fan liked the concept of our video (and QB Josh Allen's take on the Buffalo Bills logo) so much, he got a tattoo of the artwork on his arm! 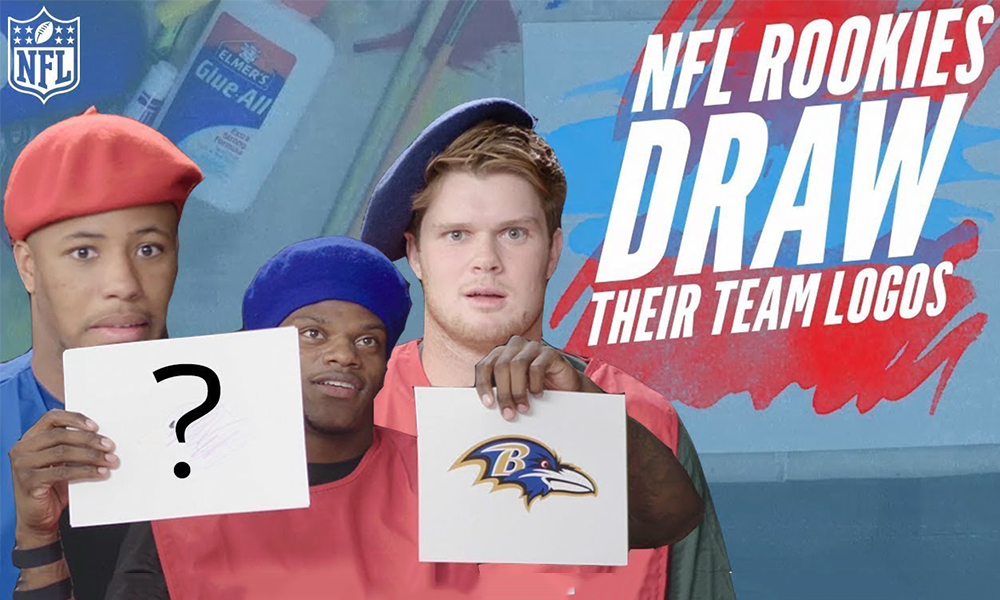 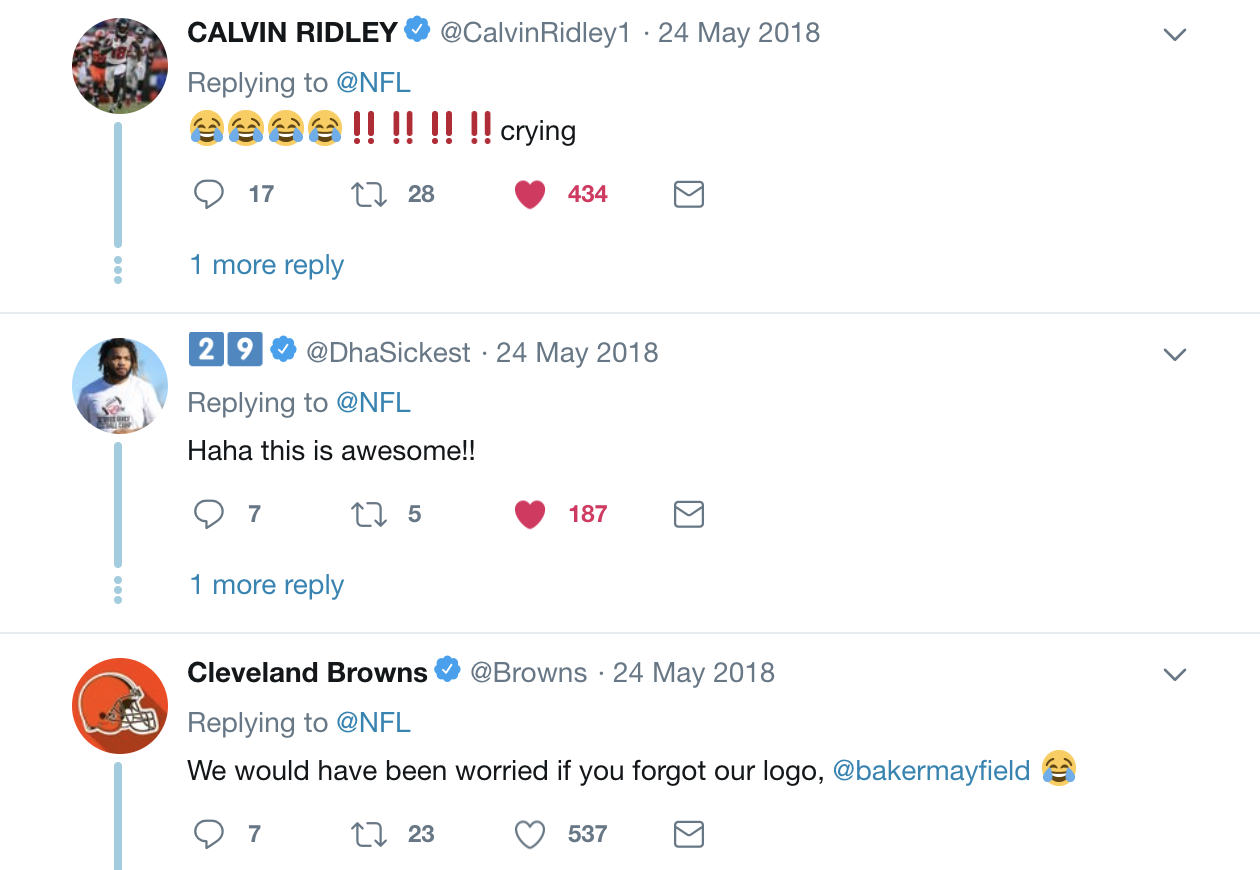 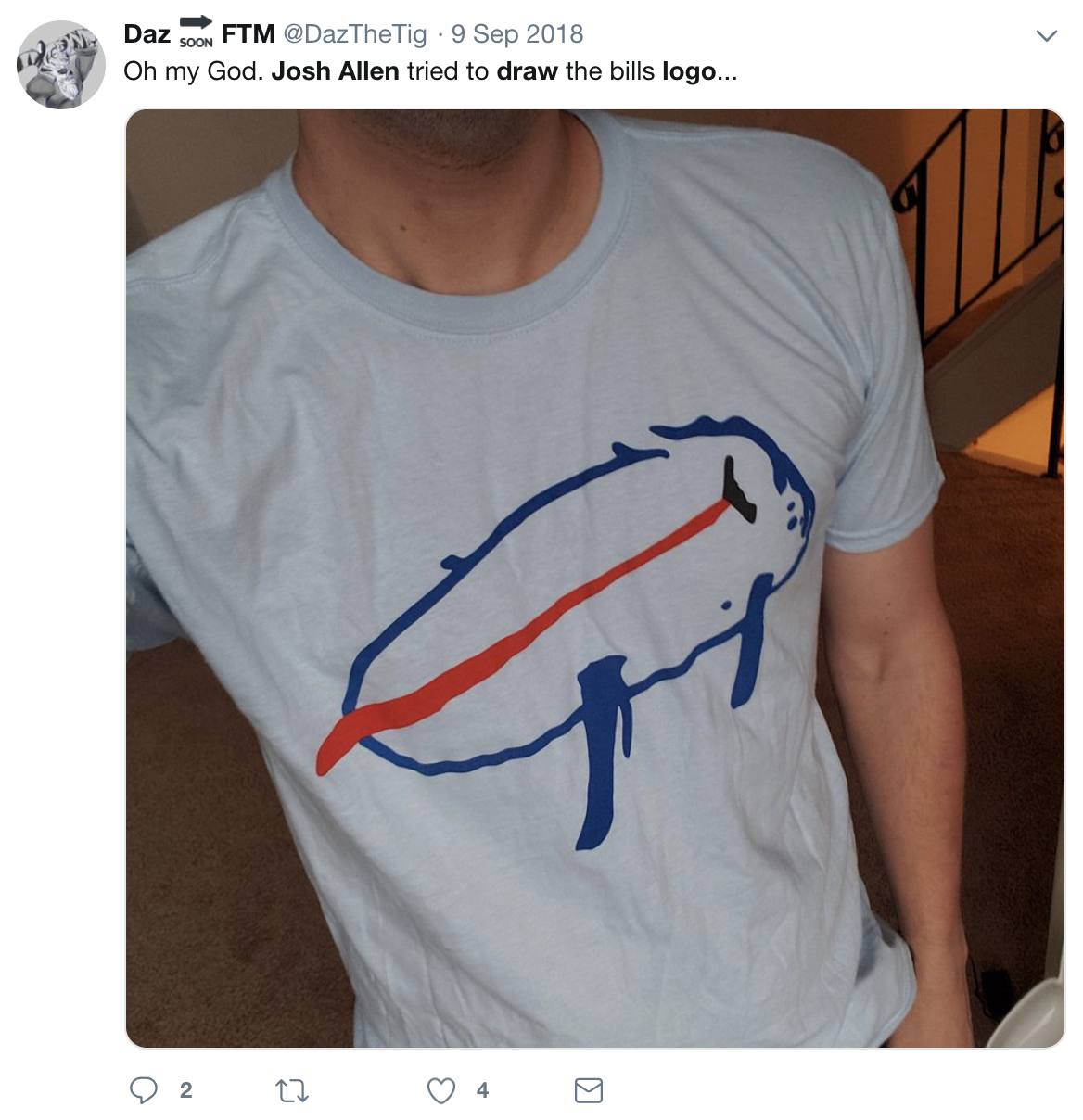 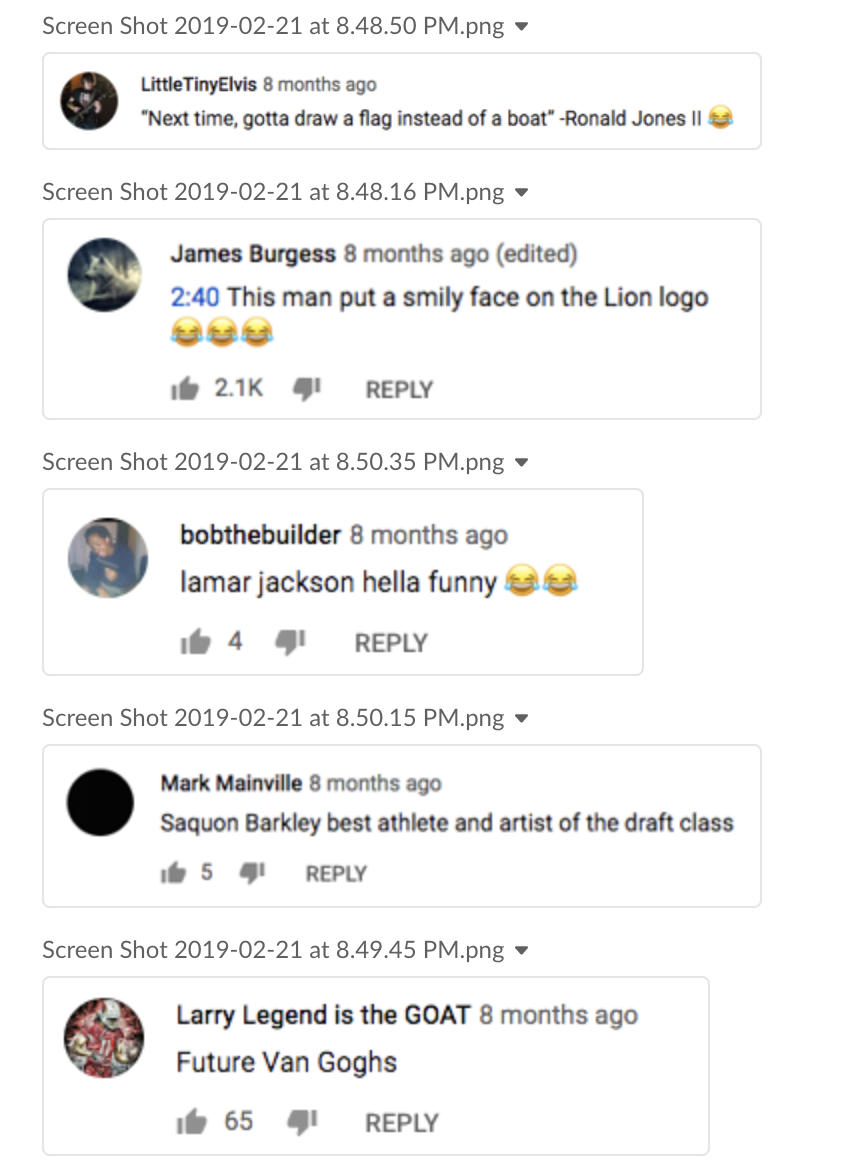 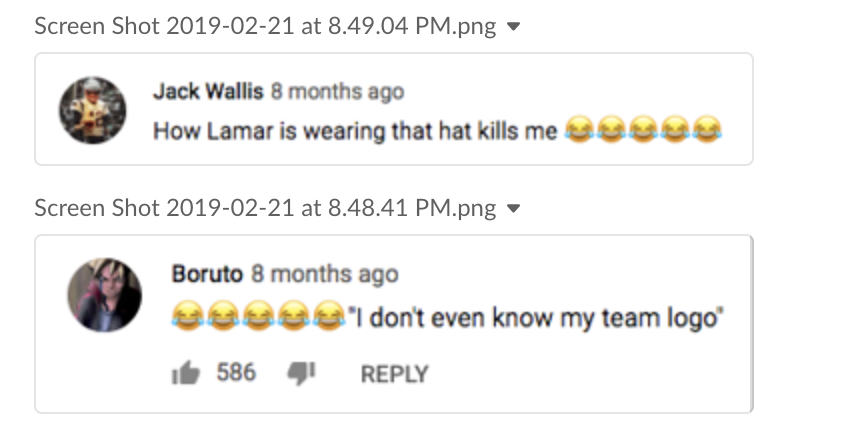 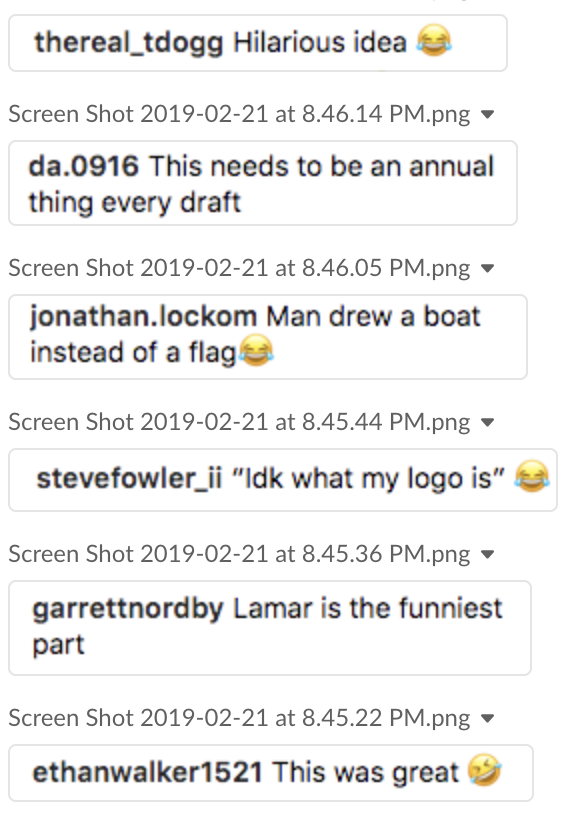 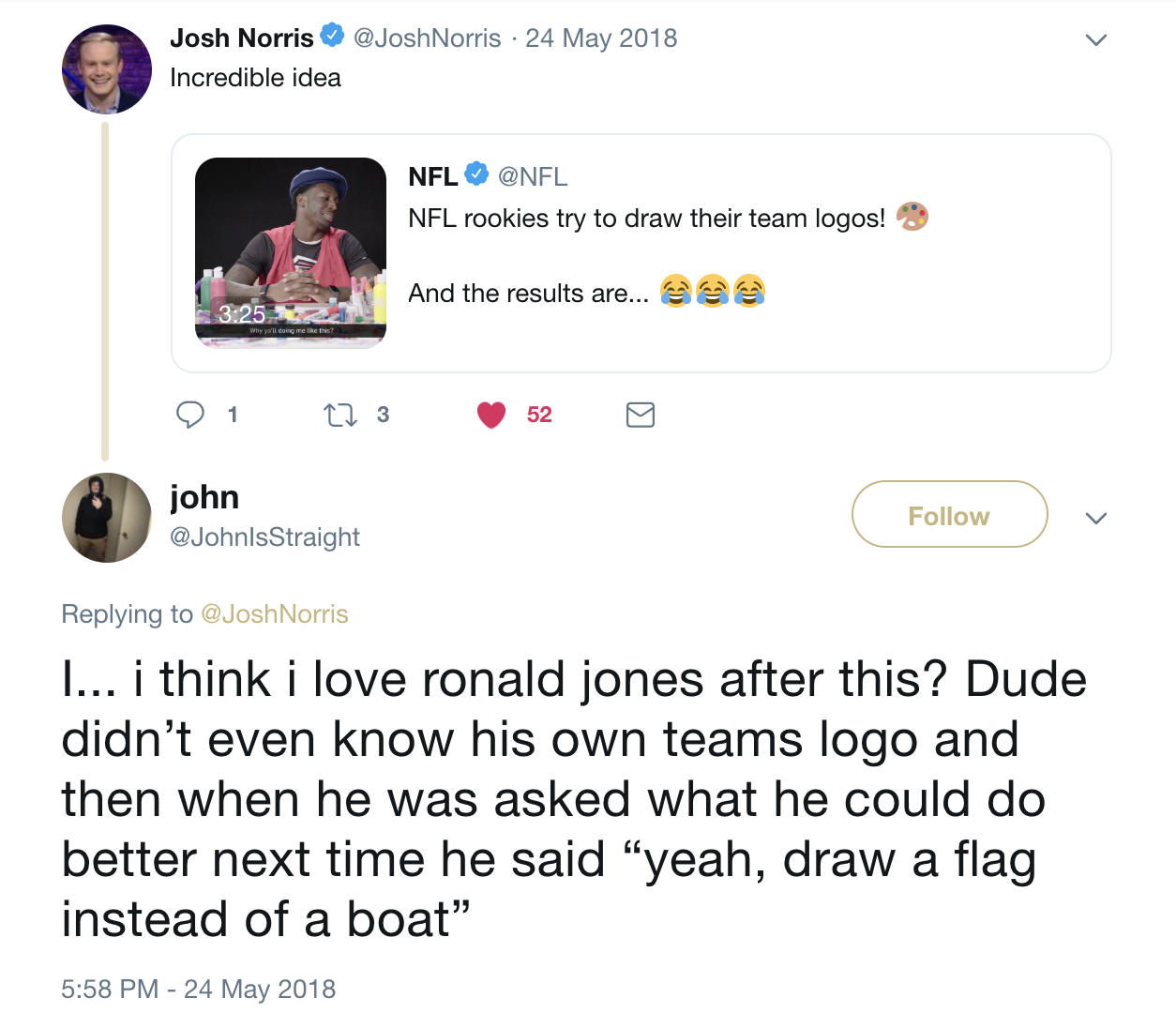