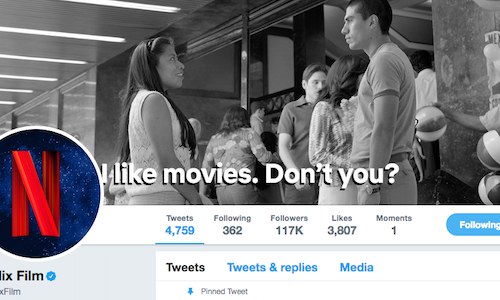 In the past few years as Netflix has expanded its film offerings, the company has entered a very crowded category. Industry veterans like Paramount and Sony Pictures, as well as highly successful newcomers like A24 and Blumhouse Productions, have been dominating the conversation. And even though Netflix offers an impressive slate of high-caliber films (both original and licensed), film buffs weren't viewing Netflix as a thought leader when it came to this world. So - we sought out to change this perception.

With Twitter being the place where cinephiles live and breathe, this was the perfect platform to start our efforts. Cinephiles use Twitter to learn, discuss, and share anything and everything related to the medium they love so much. Knowing this, we launched @NetflixFilm, a higher brow outlet that caters to a cinephile demographic. Our goal was to use our channel to elevate the perception of Netflix, grow our fan base and ignite conversation amongst film-lovers everywhere.

We developed a content strategy based around a wide variety of formats—from supercuts and scene highlights, to behind-the-scene interviews and memes. We made sure to maintain a consistent presence, posting 2-3 times a day on Twitter with additional support on Instagram. In order to appeal to our cinephile audience, we chose our films carefully based on key markers like reviews, ratings, actors, and overall fandom.

But we knew that in order to gain credibility, we couldn't just talk about films, we had to figure out how to talk about our films. So we honed in on a persona: the friendly video store clerk who seems to know everything there is to know about film. We cultivated a distinct voice that is intelligent, earnest, and relatable but also quirky and well-versed in Twitter's vernacular.

Our Film Factoids—where we pair beautiful cinematography or interesting characters with an intriguing fact from the film—give our audience fun, "film buff" nuggets to feed their curiosity. Game-type content that incorporates audience participation also gets our audience tuned in. With the launch of "Black Mirror: Bandersnatch," we created our own "Choose Your Own Adventure" horror story thread where followers were able decide the course of the story in real-time.

One of our most successful implementations on @NetflixFilm has been the recurring Friday Film Recommendations thread. Through this interactive component, we're able to highlight our film roster of original and licensed titles, encourage participation, and show off our personality. Every Friday, we ask our followers to tell us their mood. From there, we spend the next 2 hours offering personalized recommendations. All films are highly rated (at least 6.0 on IMDb) and range in date and type. We reference the entire library to ensure no one gets the same recommendation twice. To further elevated Friday Film Recommendations, we tapped in influential guest partners including Demi Adejuyigbe (@electrolemon) & @OnePerfectShot to provide an insider's POV to our channel - driving high engagement to Netflix Film's Twitter while also aligning Netflix with respected film industry insiders. By leveraging partners who were aligned with our initiative, we were able to attract and engage with new followers who are just as passionate about film as us.

In just less than a year, we have grown the @NetflixFilm Twitter channel to over 117K followers, building an active audience of cinephiles by activating elevated Twitter content. Since launching, we've earned a total of 160M+ impressions and 10M+ engagements across 4K+ tweets. Currently, our Friday Film Recommendation series is receiving approximately 200 requests per week. We've gained credibility as a thought leader in the film community with heavy engagement amongst "Film Twitter" and key industry players like Ava Duvernay, Steven Spielberg, Elijah Wood, and more. As @NetflixFilm moves into 2019, the friendly video store clerk will live on - highlighting more great films on Netflix to the cinephile audience. 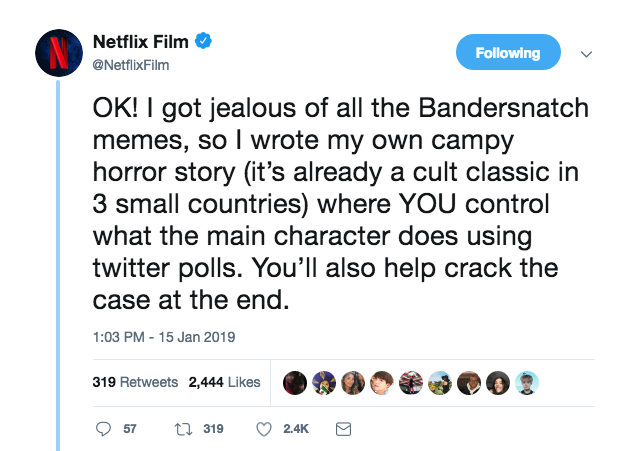 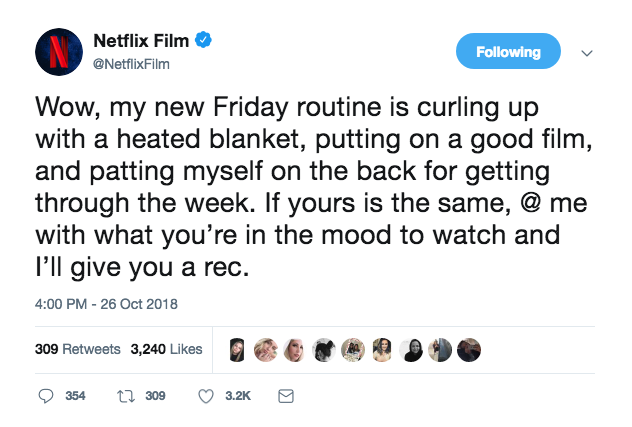 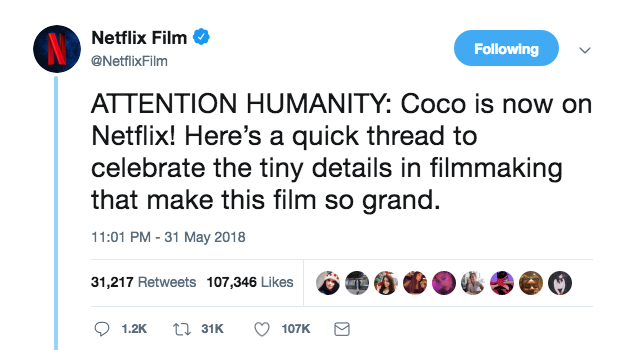