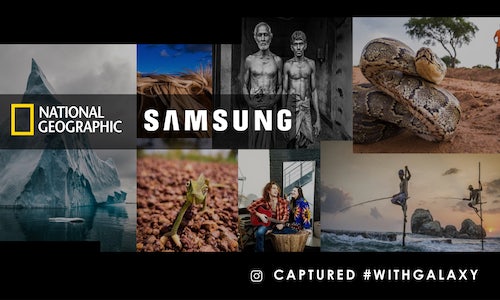 In 1906, when National Geographic first decided to publish photos in the magazine, there was absolute uproar; it was an editorial decision so controversial that board members quit in protest. And now, propelled by that decision made more than a century ago, National Geographic is known for its visual storytelling leadership, clearly proven with the #1 brand on social media position, and the first brand ever to amass 100MM followers on Instagram – a platform where the visual is king.

To capitalize on this massive, engaged consumer audience – and one clearly enamored with visual storytelling and photography – Samsung and National Geographic teamed up to embark on a ground-breaking Instagram partnership. By tapping National Geographic's world-renowned photographers, and their status as the top brand on Instagram, the partnership enabled the creation of compelling original content, showcased the prowess of Samsung's latest devices – the GALAXYS8, GALAXYS9, and NOTE8 – as critical visual storytelling tools, and inspired millions of people by demonstrating that they can have the power of a professional camera in the palm of their hands #withGalaxy.

One thing many do not know about the content curation behind the @natgeo account is that creative control is in the hands of National Geographic photographers. The team numbers about 140, each contributing regularly to the feed from around the world, sharing the rare and incredible sights their eyes (and lenses) are trained on at any given moment. Leaning into this experimental content curation strategy, National Geographic enacted an unprecedented, Instagram-only partnership with Samsung, to showcase the power of their products in an authentic way. Here's how they did it:

PUT SAMSUNG DEVICES IN THE HANDS OF THE WORLD'S BEST PHOTOGRAPHERS

National Geographic tapped its roster of world-class photographers, selecting seven from across the globe – Ronan Donovan, Cory Richards, Rena Effendi, Charlie Hamilton James, Kirsten Luce, Erika Larsen, and Katie Orlinsky – to participate in the partnership, armed them with GALAXYS8, GALAXY S9 and NOTE8 devices, and asked them to document their journeys.

The photographers captured beautiful images from the field, authentically showcasing the power of Samsung's newest devices as visual storytelling tools, and harnessing the visual canvas that the Instagram platform provides. Each photographer provided a first-person narrative, allowing National Geographic followers to connect with the photographers who share their stories from around the world. Samsung was integrated at the front of every social post, using the language "Captured #withGalaxy <device name>, produced with @samsungmobileusa." This approach brought the brand, device and features to the forefront of the partnership in an extremely high-impact way, providing the overt inclusion that ensured Samsung brand recall.

SHARE AT SCALE WITH A STEADY DRUMBEAT ON @NATGEO

National Geographic successfully engaged millions of consumers and drove brand love and brand lift for Samsung – illustrating that one of the best storytelling devices you'll ever find can fit in the palm of your hand.

In all, the program garnered nearly a billion impressions and 27M+ engagements from 90 Instagram posts. The posts exceeded benchmarks used for all content on the @natgeo account, with top posts on average driving 28% more engagements than the account median. This is particularly important as this means that photos taken using Samsung devices performed higher than photos taken using high-end cameras. Content resonated strongly with consumers, garnering more than 80% "Love, Enjoy or Beautiful" emotional reactions across a 33% reaction rate. Artful storytelling with subtle but impactful Samsung integration led to high engagement rates.

Love for Samsung continued to gain momentum over time – with the launch of the S9 device, "Samsung", "Phone" and "Camera" were among top topics in post engagements, 2x more than for S8 and NOTE8 posts. "Samsung" emotional reactions increased by 67%, "Phone" by 200%, and "Camera" by 300%.

Photographer appearance on the @natgeo Instagram account using the GALAXYS9 camerawas highly effective in changing perceptions of Samsung among non-Samsung owners. According to a social brand lift study, which captured data from May to September, 2018, 71% of people who engaged with the campaign had a more favorable perception of Samsung/GALAXYS9 after they saw National Geographic photographers using it. 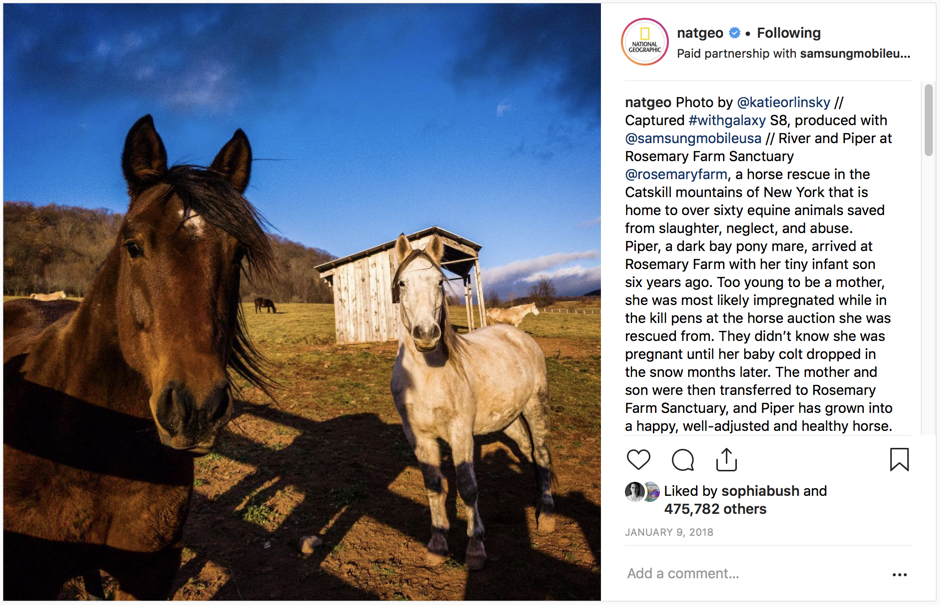 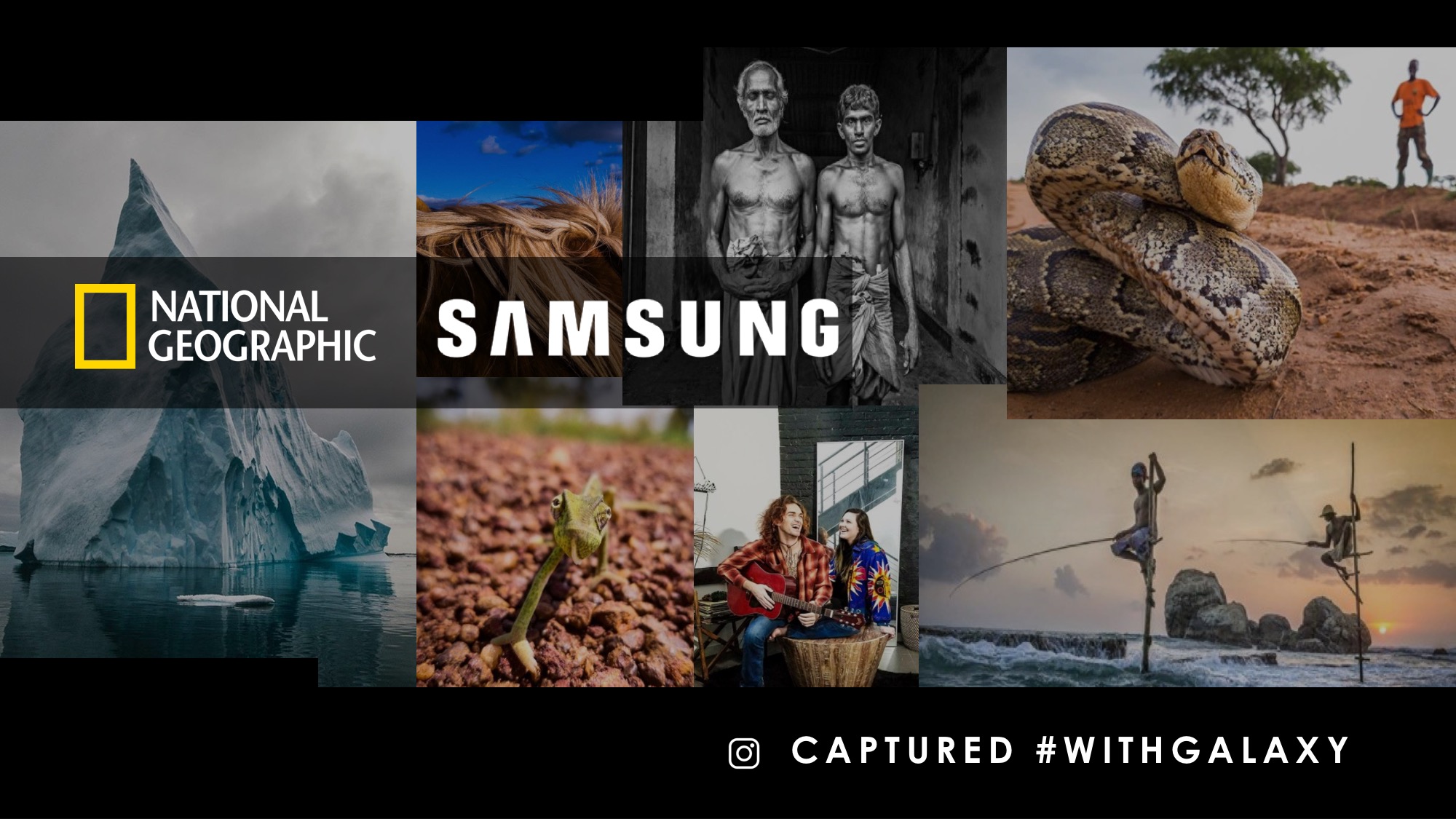 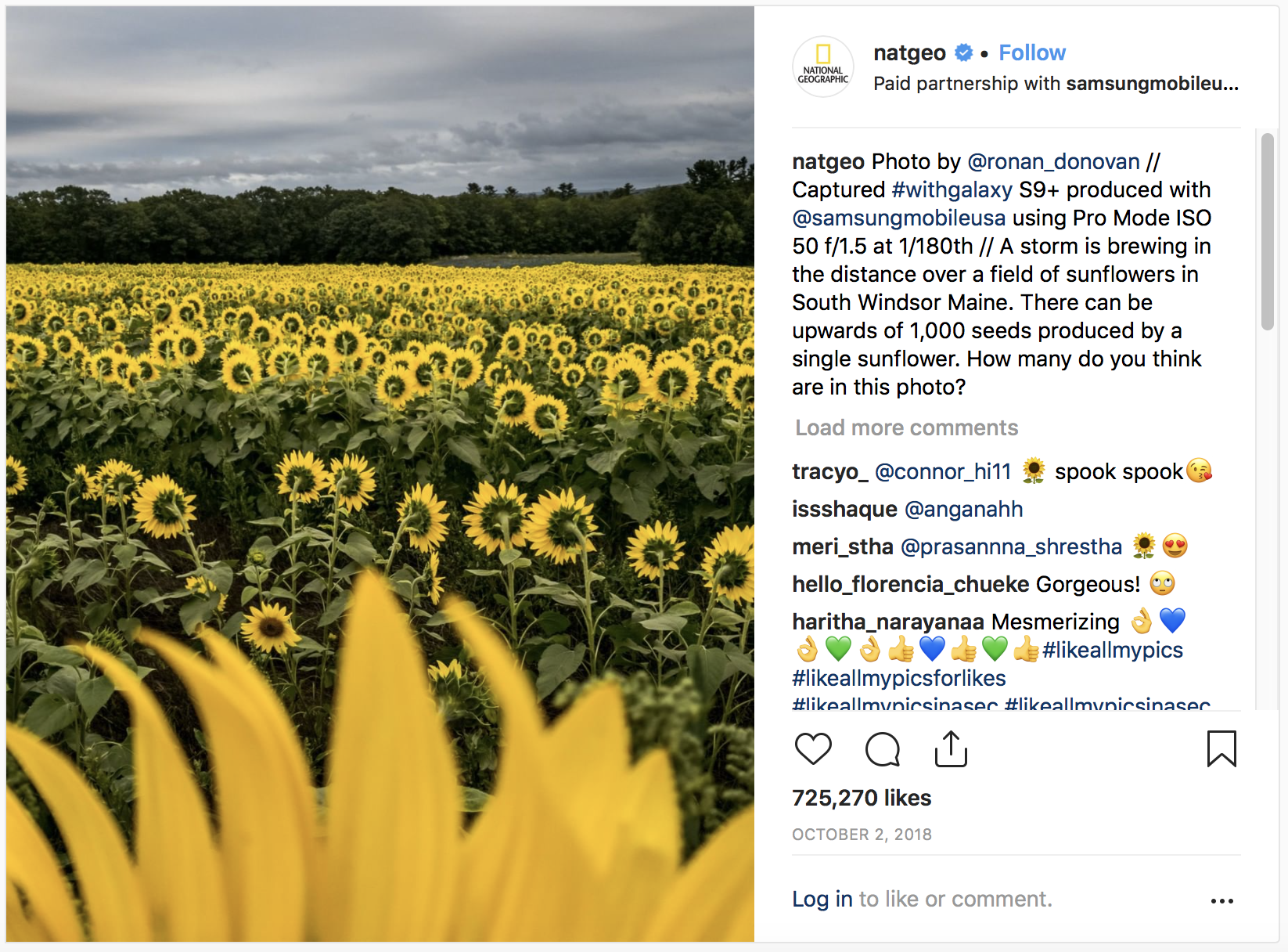 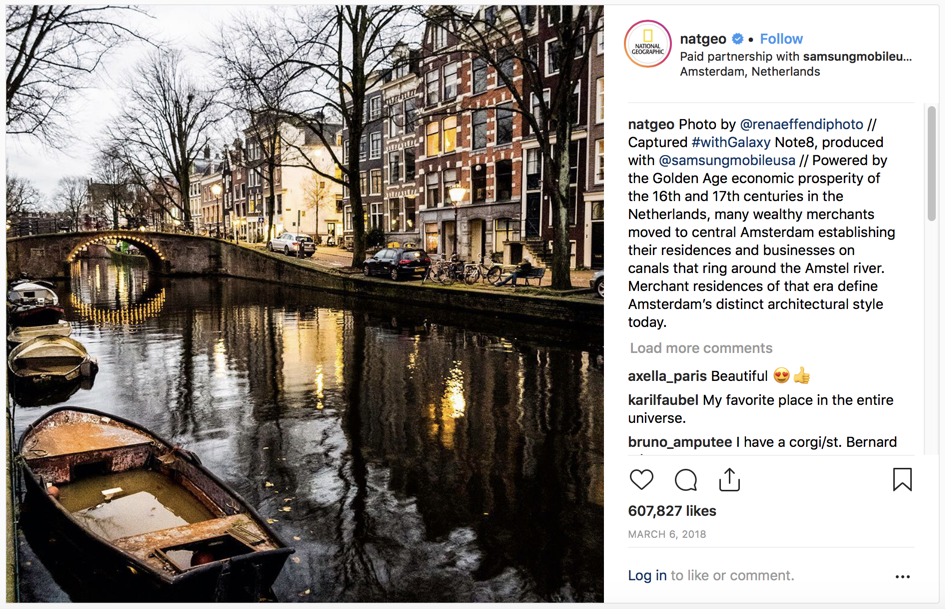 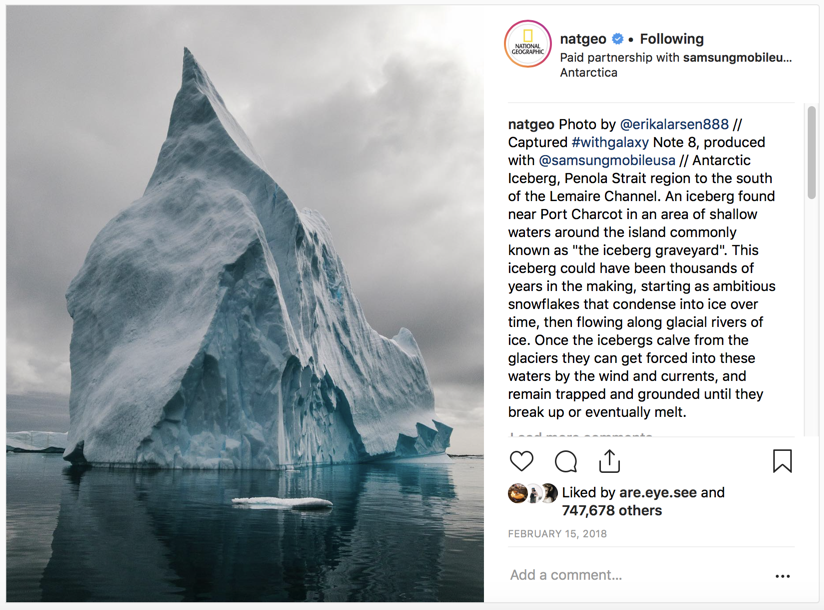 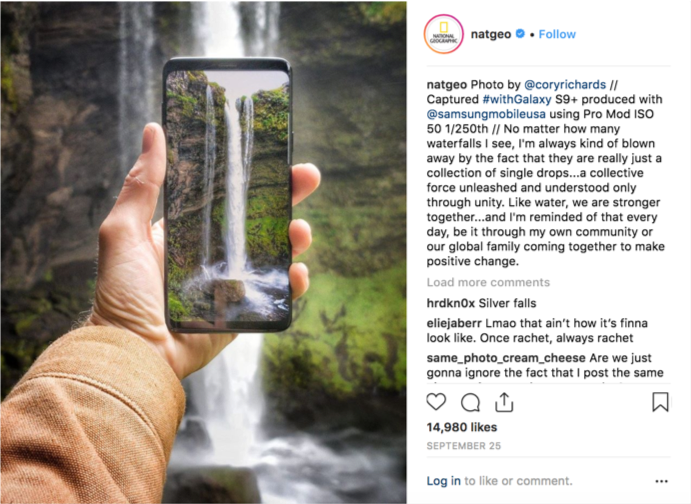 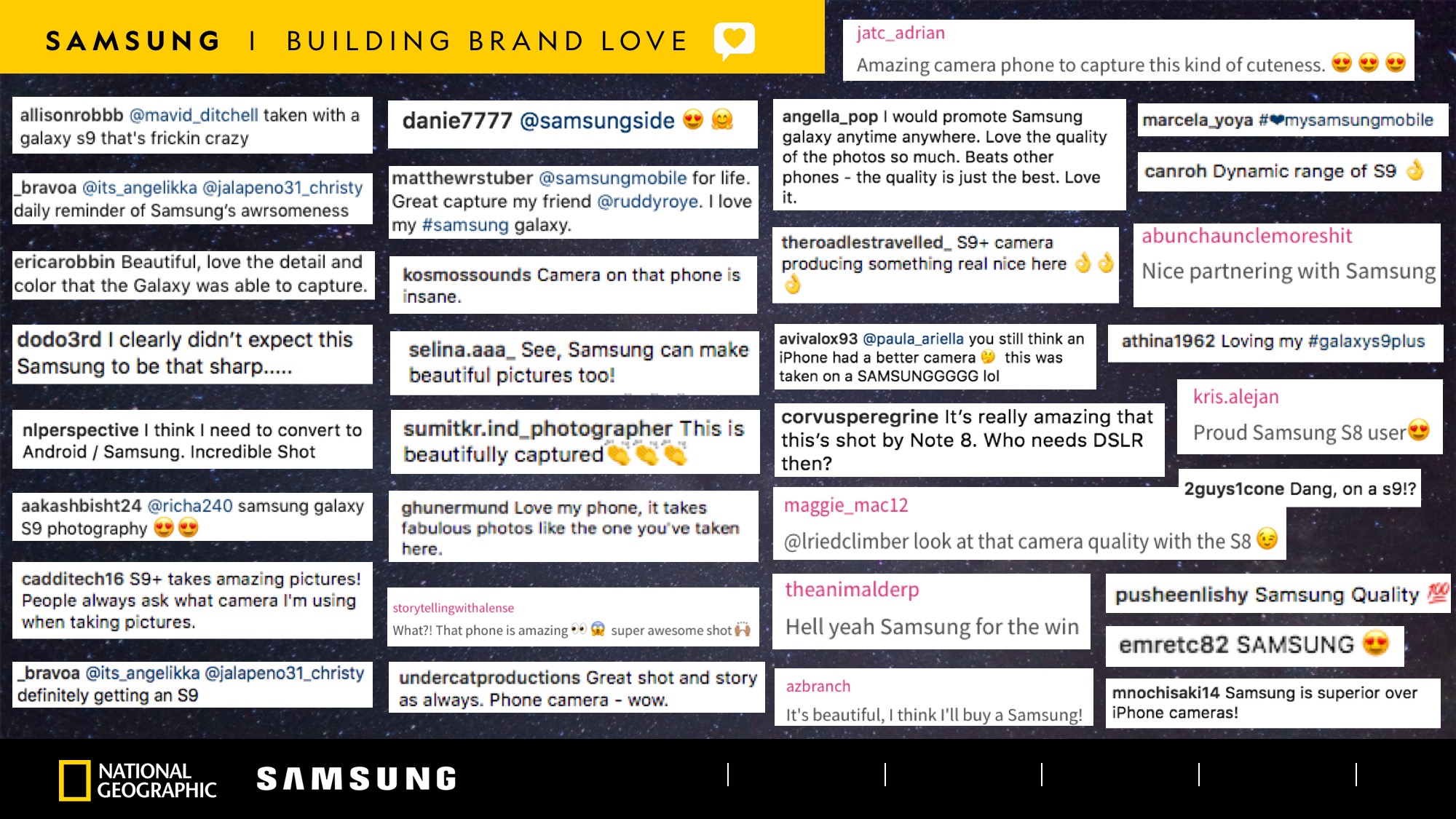