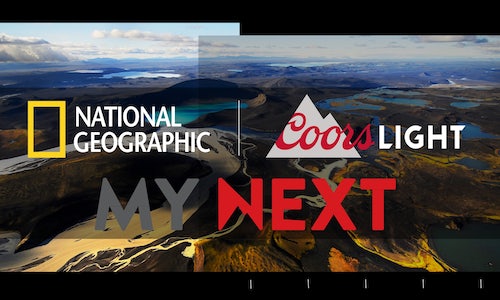 National Geographic + Coors Light: My Next

As part of Coors Light's new messaging strategy, they looked to Connect at Publicis Media to define their new tagline, "Thirst for More," through a storytelling approach. Connect selected National Geographic, who like Coors Light celebrates restless spirits and explorers, making the brand a natural fit for a content partnership.

Together, the companies sent two National Geographic Explorers to Iceland and Costa Rica to document adventures outside the Explorers' normal areas of research, as part of an ambitious, sprawling multi-platform initiative.

By pairing a shared ambition to go further with impactful storytelling, National Geographic and Coors Light set out to ignite an audience driven by an insatiable thirst to reach new heights.

The My Next campaign took viewers on a journey to meet the two National Geographic Explorers, learn about their passions, and follow them on bucket list adventures. Here's how they did it:

The multi-platform campaign included branded documentary video, editorial content and photography, each aligned with Coors Light's message to "thirst for more." The content shared stories of geologist Andres Ruzo as he left the boiling Amazon River for a mission deep into Iceland, and submarine pilot Erika Bergman, as she left the ocean to experience life in the treetops of Costa Rica's rainforest. Coors Light visual branding was woven organically throughout, from logo placement, to brand colors worn on backpacks and clothing, to seamless integration of the Coors Light can in video content.

National Geographic and Coors Light created a robust digital headquarters on NationalGeographic.com that served as an aggregating hub for all partnership content. The custom video content found on the digital hub included an anthem video, two 'Meet the Explorer' videos, two 'My Passion' videos and two 'My Next' short films. Additionally, the My Next HQ offered Explorer bios, an interactive map and eight photo journals – every piece of content was infused with Coors' messaging and branding.

The program was further amplified as content was promoted across a number of National Geographic platforms, including social and digital. My Next content was shared across National Geographic's vast social media network in 21 social posts, that were tailored in storytelling approach to each platform and channel. In total, social posts included: six Instagram stories, six Instagram video posts, seven Facebook video posts, five Twitter posts, a Snapchat Discover takeover, and video distribution on National Geographic's YouTube channel. In addition to organic reach on social, National Geographic implemented a paid social campaign to amplify the message. Social media, homepage takeovers and high-impact digital media on NationalGeographic.com drove viewers to the digital HQ, which housed all of the partnership content. A Coors Light My Next content tile lived on National Geographic's OTT to grow organic viewership. Additionally, Coors Light utilized assets from the shoot to create their social-first ads, which were distributed across their O&O and drove to the My Next hub.

The partnership showcased National Geographic's unique ability to simultaneously support Coors Light's advertising goals while helping foster science, discovery and global impact, by enabling the missions of Explorers in the field. My Next pushed boundaries, and extended Coors Light and National Geographic's ability to share stories, while enabling fans to participate directly with both brands.

The Coors Light My Next custom videos garnered 13.9M+ video views (54% above goal), and the campaign accumulated 146M+ social impressions and 1.1M+ social engagements, with the 6 Instagram stories yielding 55.5M impressions alone. The content inspired followers to find their next adventure, and an engaged social audience showed love and overwhelmingly positive responses for both the My Next program and Coors Light. National Geographic's Hero Instagram account has strict policies to only run content created by explorers and photographers (not branded content). My Next content was so inspiring and relevant, that an exception was made allowing for six in-feed videos.

My Next was covered by Adweek and Forbes, with an estimated 200K+ readership across outlets.

Video for National Geographic + Coors Light: My Next 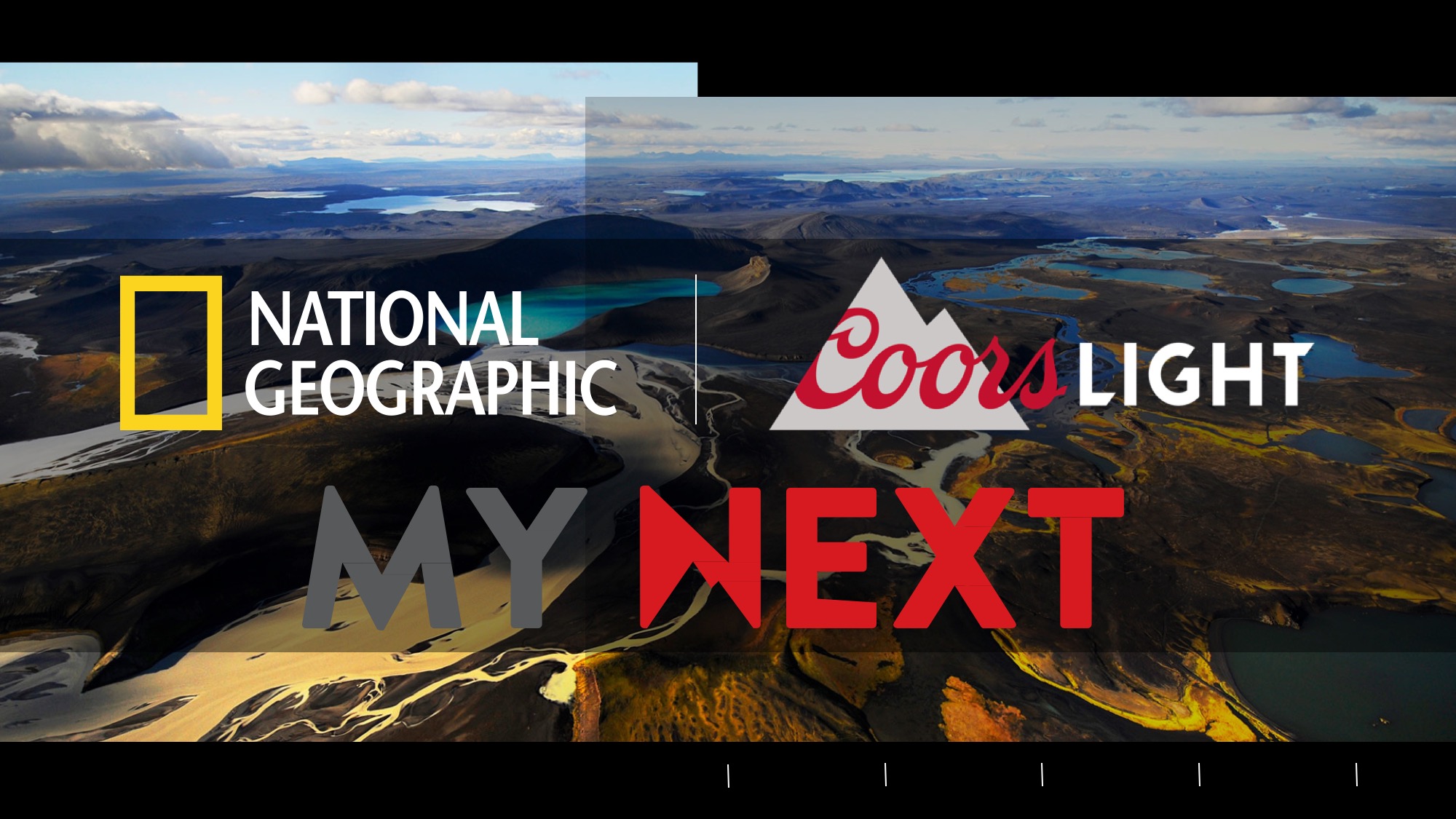 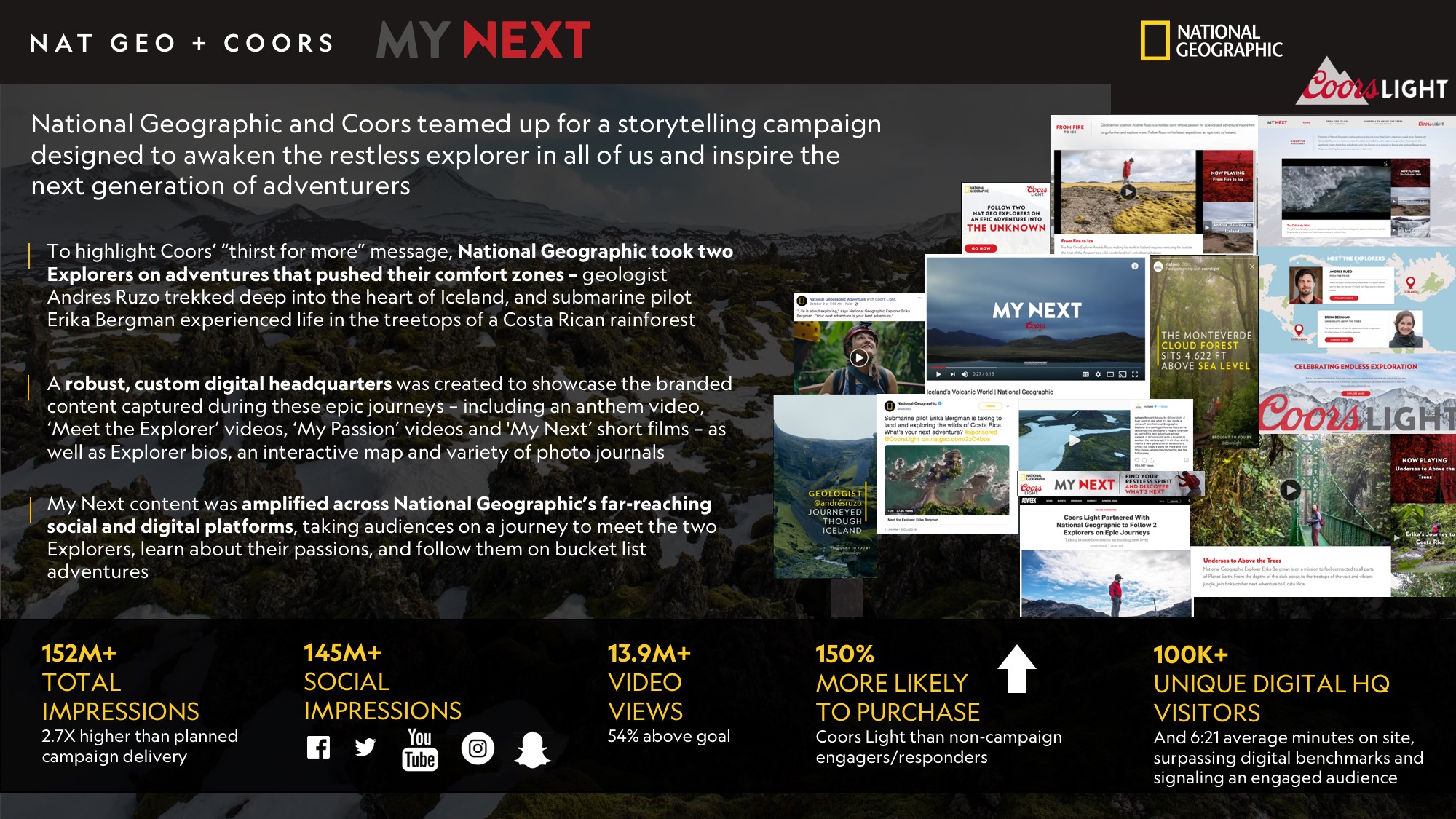